A Browbeating Cultural History of the ‘Old Battle-Axe’

What the hell is a battle-axe, anyway, and why is it even an insult?

“I’ve been trapped in a loveless marriage for the past 12 years to an old battle-axe named Kim. She cursed my life with three stepchildren named Star, R.J. and Ryan, and I have one rotten grandson.”

That was Wheel of Fortune contestant Blair Davis’ answer to Pat Sajak’s regular “tell us a bit about yourself” question.

Shortly after it aired, the clip went viral.

And while Davis made clear he was kidding, he and his wife did talk to the New York Post later to further clarify things. “I already knew it was coming, everybody laughed,” said Kim Davis. For his part Blair added, “We are constantly calling each other different names around the house.” While “old battle-axe” is traditionally a derisive term to use against a woman, as one Twitter user accurately portrayed it, the whole thing between the Davises was “kind of sweet.”

But it does make one wonder how “battle-axe” in particular became a thing to call a woman. “Old ball and chain” is fairly obvious — they’re supposedly “weighing their man down,” hence the comparison to heavy leg manacles. But what does battle-axe in this context really mean, and why do we use that term in place of more common medieval weapons, like a sword or a mace?

Digging into the history of the battle-axe itself offers little insight into this query. Historian Harry Schenawolf, owner of the website Revolutionary War Journal and creator of the upcoming TV series Shades of Liberty, explains that, back in ye olden days, battle-axes weren’t anything different from regular old axes. “Originally, an axe was only brought into battle because basically everyone went into battle and they had to grab whatever they could,” Schenawolf explains. When the Greeks and Romans began taking over huge parts of Europe, then, people across the continent were forced to defend their land, grabbing whatever sharp stuff was lying around. Schenawolf says that the closest comparison to this would actually be that American image of people picking up pitchforks to attack an enemy.

Battle-axes were later formalized into actual weapons of war by groups like the Housecarls, who were warriors for hire in medieval Britain, and the Vikings. Primarily, they used something called a Dane Axe, a long-handled axe that was wielded with two hands. Schenawolf explains that an axe was a cheaper weapon to make than a sword, since it was mostly wood with sharpened steel on the top, compared to the mostly-all-metal sword. He adds that it was rarely used by cavalrymen because of the difficulty of swinging one’s arms while riding a horse, so they were more often used by infantrymen on foot.

Despite its relative cheapness and inglorious origins, the battle-axe was a hearty, formidable weapon with impressive destructive power. In this sense, it’s perhaps fair to categorize it as a “meaner” weapon than the more elegant sword, so you can see how it might have attached itself to those of a more domineering disposition.

But why women specifically? In the first few decades of its popular usage, the term wasn’t all that particular when it came to gender — the phrase first started popping up in the 1900s and was used pretty much equally to describe men and women. While an early definition of the slang term reads “a shredishly or hard-nosed adversary female,” it was definitely also applied to men — the recipient just had to be old and grumpy enough to earn the title. For example: While a female nanny employed by President Franklin Roosevelt in 1918 was often called “Old Battle-Axe” for her damn-near-sadistic treatment of the kids, the term was also used for male politician Robert Lee Glover around the same time.

By the 1940s, the term was still used interchangeably, but this seemed to decline with the introduction of television in the 1950s and beyond. The Flintstones — which debuted in 1960 — saw Fred Flintstone refer to his mother-in-law as an old battle-axe, and on Sanford and Son in the 1970s, the name was sometimes thrown at the acerbic Aunt Esther. The push toward assigning it to females also seemed to occur in literature, as there are examples of women being called the name in the 1950s, 1960s, 1970s, 1980s and 1990s. While the term is often associated with one’s wife — as it was on Wheel of Fortune — it can be applied to any woman perceived as domineering, with mother-in-laws, grouchy old neighbors and mean school principals often regarded as being particularly suitable targets.

Who, then, was the original battle-axe? In keeping with its later usage, the first known recipient was indeed a woman: an activist named Carrie Nation. 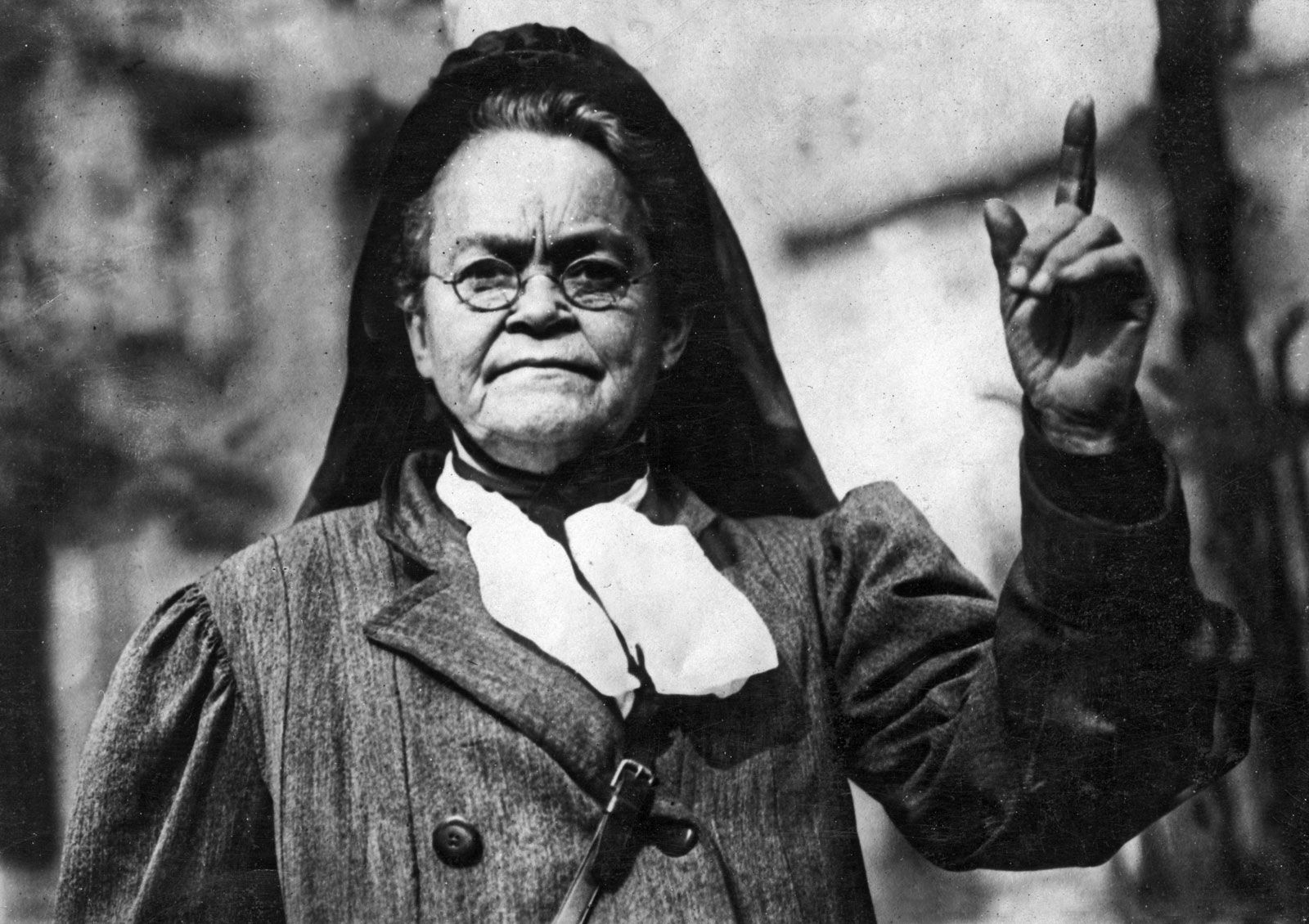 Born Carrie Amelia Moore in 1846, Nation cared for wounded Union soldiers during the Civil War. It was during this time that she fell in love with Union veteran Charles Gloyd, a doctor suffering from alcoholism. Despite her parents’ objection to the marriage due to Gloyd’s drinking, the marriage proceeded. However, within a few years, Gloyd was dead of alcoholism, expiring just after the birth of the couple’s first child.

The experience made Nation a changed woman. She soon became a radical member of the temperance movement, who had attempted to ban alcohol prior to prohibition. In 1874 she married again, this time to a man named David Nation. With the inspiring new name of “Carrie A. Nation,” she moved with her family to Medicine Lodge, Kansas. There, she stepped up her crusade, founding the local branch of the Woman’s Christian Temperance Union, which quickly grew from simple protests outside bars to entering them and scolding the sinners inside, uttering such delightful greetings as, “Good morning, destroyer of men’s souls,” to the bartenders.

But that still wasn’t enough for Nation, who eventually began pelting saloons with rocks after a “heavenly vision” instructed her to do so. Eventually, she began to gain fame — and an arrest record — for her efforts, and after one such adventure, her new husband quipped that she should use a hatchet next time to maximize the damage. She retorted simply, “That is the most sensible thing you have said since I married you.” From there, the original old battle-axe carried an actual (albeit modest) battle-axe, entering saloons with her small hatchet in hand. As the Wikipedia entry on the subject hilariously reads, “Alone or accompanied by hymn-singing women, she would march into a bar and sing and pray while smashing bar fixtures and stock with a hatchet.” Nation’s actions became so famous that bars across the country began hanging signs that read “All Nations Are Welcome Except Carrie.” 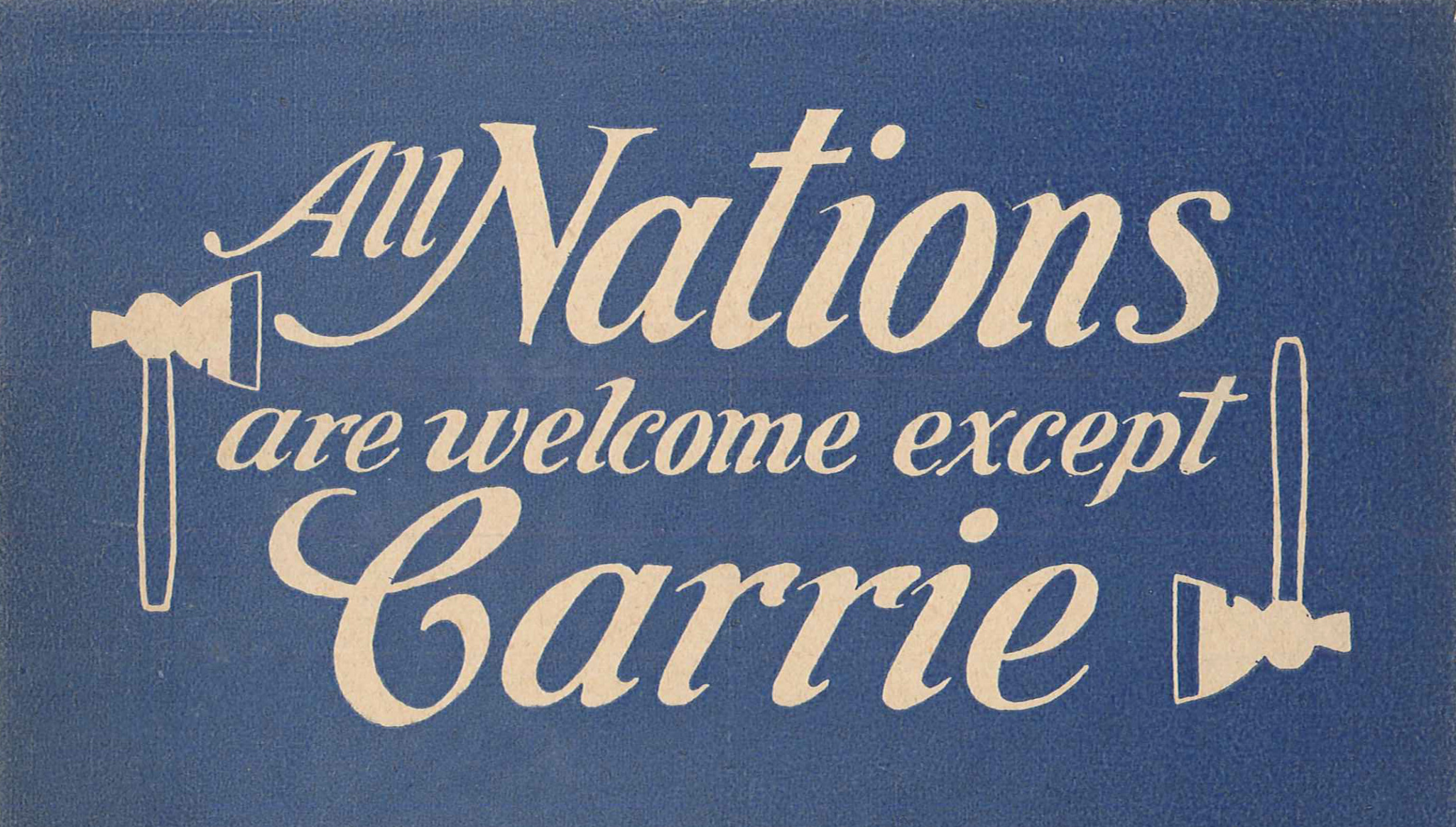 While Nation also championed worthy causes like women’s rights, she alienated much of the country with her radical methods and inflammatory statements, including applauding the assassination of President William McKinley because drinkers “got what they deserved.” And while Nation would die in 1911 — nine years before her dream of prohibition was briefly realized — her headstone aptly states, “She Hath Done What She Could.”

While sayings like “old battle-axe” tend to be so widely used that their origins are tough to track down conclusively, there seems to be something of a consensus that the phrase really was born with Carrie Nation — Schenawolf himself says he’s also heard Nation given credit for the phrase’s origin. He adds, though, that the expression may not have been quite as insulting as it sounded. “I believe it was meant that she was ‘formidable’ more so than domineering, as though she were a force to be reckoned with,” he says. Indeed, it’s reasonable to assume that Nation may have delighted in the comparison — after all, she was well known for posing for pictures with her hatchet and she was far from shy about both her toughness and her beliefs.

Given that, perhaps it makes sense for the “battle-axe” moniker to be reclaimed by strong women. It’s a misogynist saying that should have been thrown onto the ash heap of history decades ago, but as long as it’s being kept alive by guys like Davis — regardless of whether they’re joking or not — maybe it’s time to repurpose the saying into something more positive.

Y’know — something that actually has an edge.