We love to hate the Christmas curmudgeon. His grumpy, miserly, often drunken disposition threatens to sully our magical moments until, miraculously, he realizes the error of his ways. The OG Christmas crab, of course, is Ebenezer Scrooge, Dickens’ greedy, cold-hearted asswipe who hates Christmas and tiny crippled boys. His legend is so large that he spawned a string of surly descendants — from Mr. Magoo to Scrooge McDuck. And Bill Murray, of course, epically embodied Ebenezer in the 1988 dark comedy Scrooged, in which a cynical TV exec is haunted by three spirits gifting lessons on Christmas Eve. A “Scrooge” type even appears in Home Alone, when Kevin realizes the man next door isn’t a frightening killer, but a caring neighbor.

But how common are such Yuletide buzzkills IRL? I spent the last 24 hours trying to find out…

1) Historically speaking, the most famous real-life Scrooge was Oliver Cromwell — Lord Protector of the Commonwealth of England, Scotland and Ireland from 1653 until his death in 1658. Along with a Puritan-minded Parliament, he led the movement to ban Christmas entirely. “They thought it was far too ‘merry,’” explains James Cooper, “The Christmas Expert,” who tells me Cromwell worried all that feasting, wassailing and begging for figgy pudding would lead to anarchy. “Other Scrooges don’t like certain customs like trees and mistletoe as they come from ‘pagan’ origins,” he adds.

2) Case in point: Lucas Hill, a 56-year-old “developer by trade and rancher by design” who says Christmas just pisses him off. “None of it’s real,” he tells me on a petulant phone call. “It’s been hijacked by corporate America, and I’m supposed to feel bad because I didn’t buy you a Lexus? Eat me.”

3) Alaska is the Scrooge-iest state in the union according to the not-at-all Christmas experts at internet provider GetCenturyLink, who attempted this year to determine which U.S. states had the most (and least) Christmas spirit by measuring a variety of online behaviors — e.g., Google searches for gingerbread houses and Amazon purchases of “Elves on a Shelf.” (For the record, Washington and South Dakota have the most Christmas spirit.)

4) It’s safe to say they were at least right about Anchorage resident David Grisham, a self-described Christian evangelist, who in 2016 taunted a group of children lined up to meet Santa at a mall in Amarillo, Texas, by explaining their jolly hero was a fraud. “I want to tell you kids today that Santa Claus doesn’t exist,” he calmly announced to some very confused toddlers. “The man you’re going to meet today is a man wearing a costume. Your parents have been telling you a story that isn’t true. Also, there are no flying reindeer.”

5) Grisham’s hardly alone in his quest to destroy a child’s innocent Christmas wonder. Just last month, 31-year-old Aaron Urbanski was arrested for telling children that Santa Claus is “not real” at the Breakfast with Santa event at St. Mark United Methodist Church in Cleburne, Texas. And long before that, Canadian Richard Dildy held up a sign at the 1980 Santa Claus Parade in East York, Ontario that read, “KIDS! SANTA IS A PHONEY AND FULL OF BALONEY SO PULL A CHRISTMAS PRANK AND GIVE HIS BEARD A YANK!”

Defending himself in court, Dildy revealed the motive for his Scrooge-y antics: preventing children from suffering the same disappointment he experienced when he discovered that Santa didn’t exist. The bench wasn’t impressed. The judge did though offer some holiday leniency, giving the unemployed Dildy 45 days to pay the $50 fine instead of the usual five days when the verdict was issued on December 23rd. 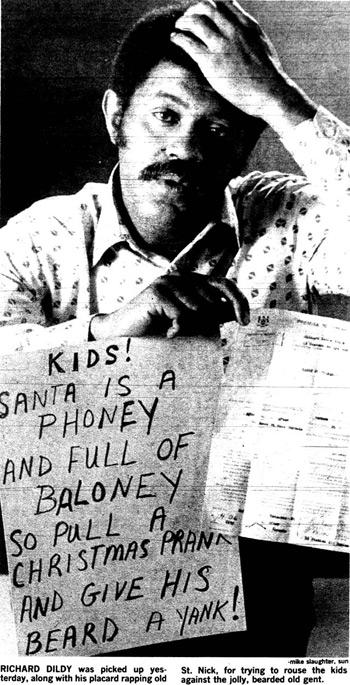 6) Another Canadian curmudgeon, psychiatrist Brock Chisholm, told the Ottawa home-and-school association in 1945, “Any child who believes in Santa Claus has had his ability to think permanently destroyed. Can you imagine a child of four being led to believe that a man of grown stature is able to climb down a chimney? That Santa Claus can cover the entire world in one night distributing presents to everyone! He will become a man who has ulcers at 40, develops a sore back when there is a tough job to do and refuses to think realistically when war threatens. Santa Claus is one of the worst offenders against clear thinking, and so an offense against peace!”

7) Chisholm would likely be fond of a Texas-size Grinch currently on the loose in Dallas, who busted into a home last week to steal jewelry, all of the Christmas presents under the tree and Smokey, the family dog. Other Grinches steal presents from Toys for Tots drives; a great grandmother’s Christmas fund; Christmas decorations in Pittsburgh, Brooklyn and Florida; and an autistic child’s donated Christmas bounty. Then there’s the Grinch who got screwed in family court and mowed down the inflatable snowman in his ex-wife’s front yard.

8) According to professional Santa Michael Wubker Sr., whom I first met aboard a Real Bearded Santa Cruise in 2017, living, breathing Scrooges are “usually people who have had their hearts hardened by life circumstances. Some may have lost a loved one, others see Santa as an appropriator of society’s materialism.”

Wubker tells me he came upon one such drunken Scrooge at a Christmas party for a large financial institution who heckled him off the stage. “Afterward, he told me that he was a Christian and didn’t believe Santa was a good influence on children. I politely explained that Santa represents goodness in the world and the difference between naughty and nice. He brings joy and happiness to the world and in return only asks for some milk and cookies.”

9) If you ask Hill, the aforementioned “rancher by design,” Santa can shove the milk and cookies up his ho-ho-hole. In fact, every Christmas, Hill texts a Christmas rant to everyone he knows, explaining why the holiday is bullshit. “I don’t do birthdays. I don’t do Valentine’s Day. I don’t do any of that shit,” he explains. “Twenty years ago I told everyone, ‘I can treat you special on this day, or you can give me the day off and have me for the rest of the year.’ If I was a Christian, and I’m not, but if I were, I’d be pissed that they circumvented this arbitrary date of the Lord’s birthday just to sell shit. I guess what pisses me off the most is the stupidity of the fucking sheep on this planet to follow those crumbs into the store.”

10) A taste of Hill’s 2017 anti-Christmas rant: “Here it is again, the fictitious holiday Christmas. One of the worst made up days with guilt and shame thrown in to invoke a material response to what we are told is about love, peace and goodwill toward all. What the fuck does a new Mercedes for my wife have to do with love? This ‘holiday’ above all others reinforces the idea that what you give goes in a ‘win’ column. So what does that say to all of those without means to give? It says you’re not enough. We can take that collective low self-esteem and lay it right at the feet of Madison Avenue.”

11) Hill is what’s known as a “Christmas Hater,” which Urban Dictionary defines as “a grouch who detests everything about Christmas, including but not limited to: Shopping malls, greed, annoying kids, buying toys, Santa Claus, Frosty the Snowman, cold winters, ice on the road, lights, Christmas carols, political correctness and ‘the mother in law.’”

14) Christmas Haters can be found worldwide. For example, bah-humbug protesters — consisting mainly of single men referring to themselves as “Losers with Women” — marched through Tokyo in 2015, claiming the holiday was a capitalist ploy that discriminates against single men. (They’d previously protested against other holidays, including, of course, Valentine’s Day.) The head of the organization, who identified himself by the pseudonym MarkWater, said the anti-Christmas rally was in support of unloved men everywhere. “Unpopular men who don’t have a girlfriend or are not married are overly discriminated against,” he told the Washington Post. “We want to break this barrier.” (It’s still unclear exactly how all of this relates back to Christmas.)

15) Some guys, like New Jersey motorist Cory Windelspecht, just hate the decorations. Windelspecht, who launched a petition last week to change the Christmas decorations over the entrance to the Holland Tunnel, explained his OCD couldn’t bear how two “O-shaped” wreaths cover the “O” and “U” while the “tree-shaped” wreath is placed over the “N” instead of the “A.“ “You’ve obviously put the wreath over the ‘O’ and another wreath over the ‘U’ cause it’s kind of ‘O’ shaped,” he wrote to the NY Metropolitan Transit Authority, “but with the tree you didn’t give a flying f— because you put the ‘A’ shaped tree over the ‘N’!” 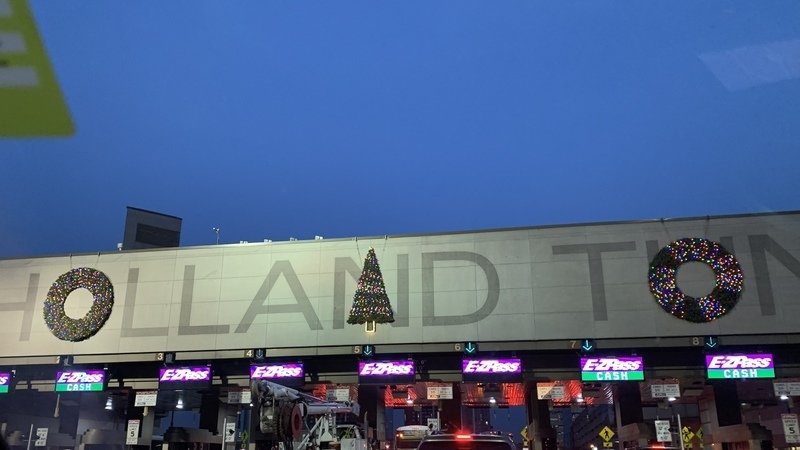 16) Women can be Christmas Haters, too — like Lior Zaltzman, a social media editor and artist. “Red and green is ruined FOREVER,” she writes. “As an artist, Christmas is an affront to me. Red and green are complementary colors. Which means, in theory, they should work well together. BUT GUESS FRIGGIN’ WHAT?! Christmas has made it impossible to use that color combo. It’s supposed to be attractive but all it does is hurt my eyes and give me Christmas nightmares. And also, the music NEVER STOPS. Some Christmas songs are quite lovely, but it is very hard to still like a song after you have heard it for the 200th time in two weeks. It turns quickly from a source of joy to a cruel, cruel torture device.”

17) Author Peter Blauner concurs. He tells me he hates Christmas, but loves songs about hating Christmas. “Something in me goes into adolescent rebellion mode when told to smile on cue,” he explains. “And it’s hard to think of another time of year when that smile-on-cue demand is more prevalent than right around December 25th.”

Worst of all, Blauner adds, are the suspiciously saccharine carols. “If I never hear ‘Winter Wonderland,’ ‘Silver Bells’ or ‘It’s the Most Wonderful Time of the Year’ again, I will die a happier man. That last one especially puts my teeth on edge, because says who?!?!”

Instead, Blauner offers this trio of “Anti-Christmas Carols,” the perfect note for a Scrooge-y sendoff: