The Dangerous Alliance of TERFs and Men’s Hate Groups

Why the Proud Boys marched in support of women’s transphobia

“The TERFS Are Actually the Smarter Feminists.”

So begins a recent post on r/MGTOW2, the subreddit populated by “Men Going Their Own Way,” a group that prides itself on shunning relationships with women, along with the institutions of marriage and the nuclear family. The above is a jarring comment insofar as the MGTOW community, and the wider segment of the manosphere that deals in extremist, Red-Pill rhetoric, are staunchly anti-feminist as a matter of course. To these men, mainstream feminism is a tyrannical force, something that keeps them down in a world where conniving women already have all the advantages.

And that, according to this Red-Pilled redditor, is exactly why TERFs are making a sensible argument. The label, which stands for “trans-exclusionary radical feminist,” is perhaps a bit of a misnomer — they aren’t radical, and their feminism is very much up for debate. It refers, at root, to women who deny trans women the status of genuine womanhood, and foment moral panic over male-to-female individuals gaining access to spaces they maintain are strictly the province of those assigned female at birth.

“You can see,” the MGTOW goes on to write of TERFS, “they are well aware that feminism has in the last 50 yrs created a world where women live on easy mode at the cost of men.” Now, he says, they’re afraid to grant that benefit to anyone who has transitioned from male to female. “Trans athletes are beating the shit out of female athletes. Men are winning female beauty contests because they identify as a trans woman. I have heard of numerous stories where men suddenly identifying as trans women are being promoted due to diversity policies and are basically enjoying the pussy pass without actually having a pussy.” Below this post, a commenter agrees that MTF individuals seek to exploit “female privilege.”

The average TERF is unlikely to agree that women control the world through the subjugation of men, and it would be more accurate to say that they’re driven by transphobia — an unfounded fear that they’ll somehow be harmed, or have their own femininity undermined, by trans women. Yet, underneath his misogynist language, the redditor is faithfully repeating the talking points favored by TERFs, including the flawed assumption that trans women competing in women’s sports is, from a biological standpoint, intrinsically unfair. This particular question drives to the key overlap between the Red Pill gang and the TERFs, groups that would otherwise make baffling bedfellows: gender essentialism, or the belief that a person’s gender is permanently fixed by their biological sex. They disagree on the relative pros and cons of being a man or woman, but they strongly concur that one has no agency in the matter.

As such, the nominally “liberal” TERFs and right-wing agitators also find common ground within a hotbed of our culture war: the bathroom. Both factions have hammered the untruth that allowing trans women to use women’s restrooms is a safety risk, implying sexual predation.

There is no evidence of this, but as a lightning-rod topic, it’s inspired public outcry, controversial legislation and, this summer, a series of street clashes in L.A. These demonstrations began in response to an Instagram video — now regarded as a hoax by the media and police — in which the user confronted employees at Wi Spa in Koreatown over a “man with a penis” in the women’s locker room. The woman recording also says that children saw this individual, as if to invite further outrage, though none show up in the footage.

The LGBTQ-friendly spa has said that no trans clients had appointments on the day in question, and authorities have found no witnesses of the alleged incident. Nevertheless, the probably staged clip made waves on TERF and far-right websites alike. The claim that children were abused seems designed to equally inflame the emotions of TERF mothers and a reactionary fringe linked to QAnon, which is premised on the existence of a massive pedophile network and recruits with “Save the Children” sloganeering. Overall, too, the contemporary Republican base is very susceptible to the canard that LGBTQ inclusion is a front for normalizing pedophilia. 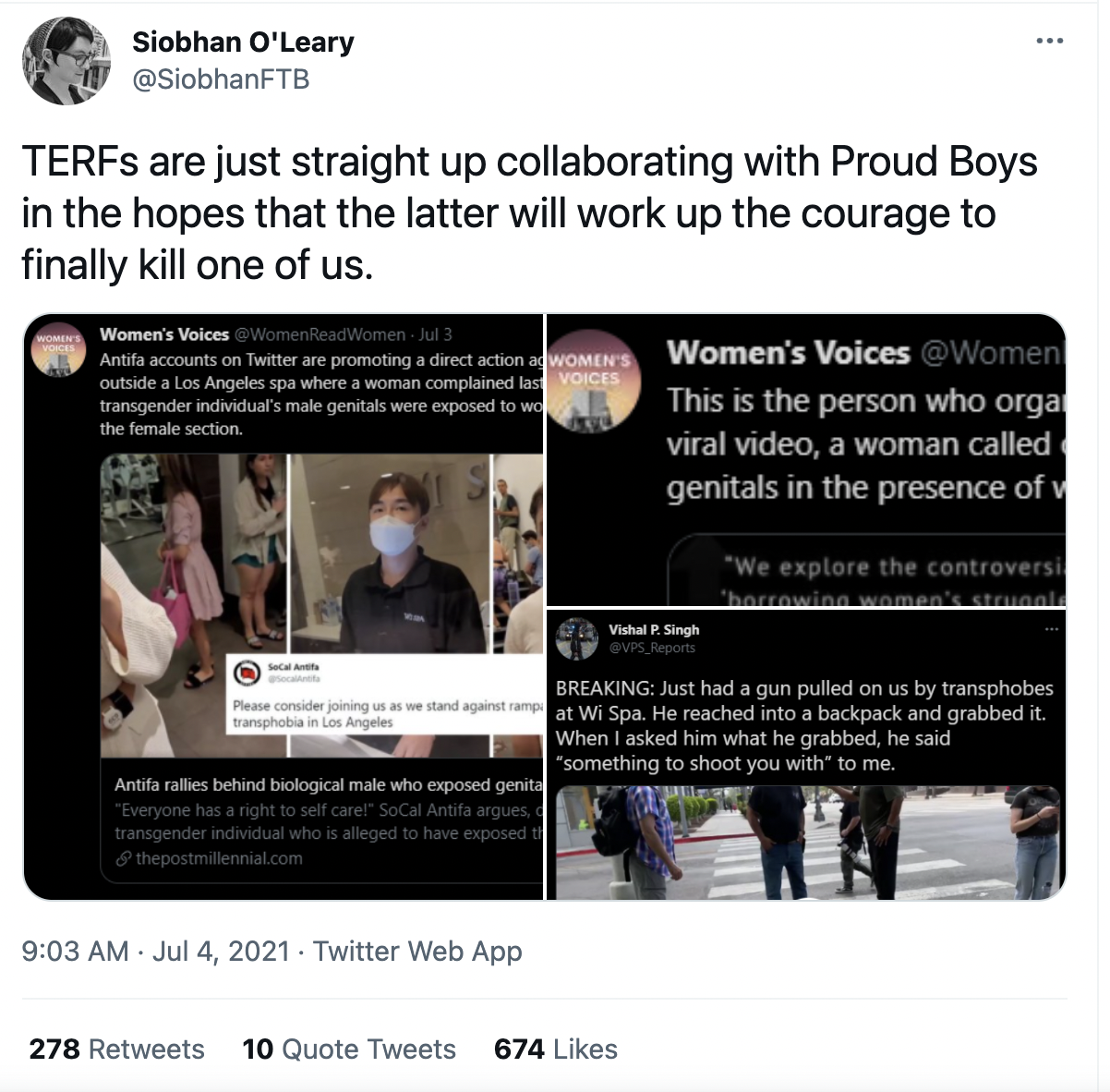 Both the pro-Trump QAnon movement and the white nationalist extremist group the Proud Boys were represented outside Wi Spa a week after the inflammatory video made the rounds, and on their side marched women carrying signs that read, for example, “protect female spaces.” They violently clashed with counter-protesters (there were reports of two stabbings), which led cops to declare an unlawful assembly. The same dynamic played out the following weekend, but with an increased LAPD presence (leftists appeared to be the main targets of their crackdown).

That supposed feminists would openly ally with the likes of the Proud Boys, for whom the Red Pill is an organizing principle, tells us just how cozy TERFs have gotten with sexist ideologies so long as they reiterate the transphobia that fuels their own political project. Women, of course, aren’t immune to self-loathing tendencies — they have Red Pill forums as well — but this goes beyond the internalized misogyny that allows for sympathies with hypermasculine hate clubs, because the far right also preaches racism.

The upshot is that TERFs won’t stop at joining an armed and dangerous anti-trans mob; they will also dabble in, say, the trope that Jewish billionaires are pushing a trans “global agenda,” a conceit that happens to align with the views of Nazis. In cherry-picking a few examples and botching some basic facts to persuade her reader that they’re being brainwashed to let trans people seize power, The Economist’s Helen Joyce wound up writing a bestselling polemic that, intentionally or not, synthesizes run-of-the-mill TERF dogma and common anti-Semitic dog whistles into a single conspiracy.

For many years, both the TERF network and the Red Pill manosphere have brought fresh blood to heinous causes via pseudoscientific diatribes on gender — either could be a pipeline to ethnonationalism. But their convergence in this moment feels new and especially disturbing, and the Wi Spa news cycle shows they’re able to coordinate in ways that serve to amplify their message further still. In retrospect, it was only a matter of time before the two contingents opted to put aside their differences and focus on shared enemies: the vulnerable and oppressed.