Ted Cruz: Whose Man Is This?

Amid yet another dumb scandal for the Texas senator, even his party struggles to support him

Incumbent Sen. Ted Cruz (R-Texas) won reelection over Democratic challenger Beto O’Rourke in a 2018 race that ranked as the closest in the state since 1978: He fell just shy of 51 percent of the vote. In raw numbers, his margin of victory was about 200,000, with Cruz taking 4,260,553 ballots. That’s well over 4 million Texans who wanted to hang on to a senator whose unfavorability rating had, for the two years prior, sat high above his favorables. It was only when faced with the alternative of a liberal guy that the populace seemed to drift back toward Cruz.

Of course, among those millions of voters were many staunch Republicans and self-identified conservatives who wouldn’t dream of crossing the aisle or staying home. The same was true of Trump’s base, who stuck by him through 2020 and beyond — but Cruz supporters are noticeably less inclined to voice their affection for the senator, let alone wear hats and wave flags with his name or slogans on them. Rather than project confidence in their candidate, some highly positioned Republicans floated the possibility of his loss to O’Rourke.

On Capitol Hill, he has also endured an incredible string of insults from GOP colleagues: Senator John McCain called him a “wacko bird,” House Speaker John Boehner declared him a “jackass,” and during the bitter 2016 presidential primaries, Senator Lindsey Graham memorably joked, “If you killed Ted Cruz on the floor of the Senate, and the trial was in the Senate, nobody would convict you.” (Perhaps more seriously, Graham once noted that Cruz, “at his core, is an opportunist.”)

With allies like these, who needs haters? Ah, but Ted has those, too, a virtual army of them, always keen to revel in his Twitter humiliation at the hands of Rep. Alexandria Ocasio-Cortez or amplify his each and every scandal. The latest was his puzzling decision this week to fly to Cancun, Mexico, for a vacation with his family while Texas endured punishing winter weather that has caused widespread power failures, water shortages, runs on supermarkets and at least 21 deaths so far.

Only when it was confirmed that photos circulating online showed him making the trip did he make up some bullshit about accompanying his daughters on the flight with plans to immediately fly back (contrary to reports that he originally planned to stay there for several days). And this followed his shrugging at outlets that brought up his previous mockery of California’s leadership over the state’s own energy crisis during brutal heat waves in 2019.

Does someone actually want this guy in charge of anything, or nationally visible for any reason? Politicians are a revolting species, but it’s hard to come up with a single likable or relatable thing about this craven dipshit — rather shocking for a man who rose to his office in an upset win thanks to grassroots enthusiasm from the Tea Party movement while being outspent by his opponent. The right-wing talking heads, for all their hypocrisy, usually do a half-decent job of spinning for their side when someone fucks up. Cruz, however, is so utterly without charisma or political instinct (duty to constituents aside, he didn’t anticipate the optics of fleeing a frozen Texas for his little beach getaway) that the strain really shows whenever it’s time to defend him. Both blogger and radio host Erick Erickson, one of Cruz’s earliest advocates, and right-wing conspiracist Dinesh D’Souza wound up making the argument that the senator may as well take a few days off in the middle of a catastrophe because he’s quite literally useless.

D’Souza went so far as to describe him as a drain on Texas resources. Erickson later retweeted a Cruz booster who had second thoughts once he read that the senator had requested a Houston police escort at the airport when emergency services were already stretched thin. And he shared a meme comparing Cruz’s attempted holiday to former New Jersey Governor Chris Christie’s notorious day on a beach closed to the public due to a 2017 state government shutdown.

On top of everything else, he has what may well be the most ridiculed beard in America. 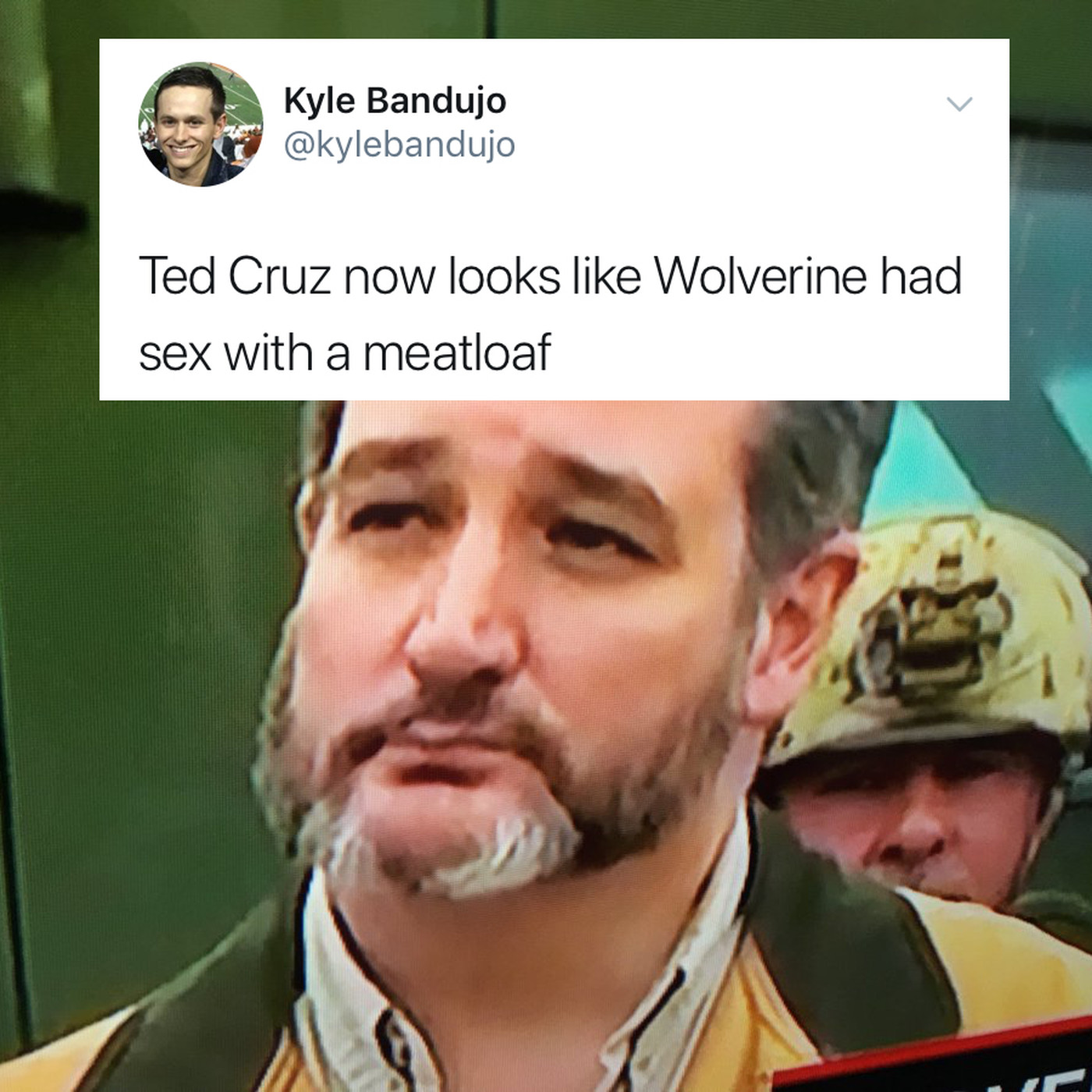 What is the point in continuing this degradation? Truly, whose man is this? Heidi Cruz is a managing director for goddamn Goldman Sachs, so it’s not as if he’s the breadwinner of the family; as a public figure, he is a mere punching bag who maintains status through sheer inertia and will never rise any higher, loathed even by members of his morally bankrupt party. The respectable course of action would be to step down and fade into white-collar obscurity, though his role in the Capitol riots of January 6th may limit his options on that front.

My goodness, how much striving for such a pathetic result, and how laughably weak he is for a man in power. Climbed the ladder because he could, but forgot to take a break between reading The Babylon Bee and cooking bacon on machine guns to figure out why anyone should be pleased that he did. Some A.I. robot might easily do his job, and without punching itself in the nuts every five minutes.

Alas, that’s the kind of future progress always blocked by Cruz, the miserable face of the present.