Some Incels Envy Ted Bundy. Others Praise Him as a Hero.

‘Imagine what we could accomplish if we had an army of Ted Bundys. All of womankind on the North American content would have been exterminated in a short period of time.’

The streaming era demands a never-ending parade of violent men — real or fictional — to terrify and titillate viewers in binge-worthy ways. Ted Bundy, one of the more prolific rapist-murderers of the 1970s serial killer boom, has finally gotten his turn. An upcoming biopic stars Zac Efron, and Netflix has unleashed a hit docuseries, Conversations With a Killer: The Ted Bundy Tapes, which offers an uncomfortably close-up analysis of the man himself.

But revulsion at his crimes has mingled with different, taboo feelings. That a young heartthrob like Efron was cast in the role has played into concerns that we’re now glorifying Bundy, and the pervasive horniness of Twitter prompted a surplus of “Ted Bundy lookin’ like a snack” commentary — an attitude Netflix was compelled to criticize.

This led to a still more shocking development. On Reddit’s r/braincels forum — a community where incels (“involuntarily celibate” young men) rail against the women who won’t fuck them and the guys who do get laid somehow — one dude made an actually salient point. “Lol this is exactly what Netflix wanted,” he wrote. He’s right! Nobody churning out content in this day and age can any longer be surprised at how eager people are to declare villains, monsters and creeps to be “hot.” These counterintuitive, ironically problematic takes are catnip for a jaded internet culture, and the debates around them drive trends in consumption. A concurrent Netflix phenomenon, the drama series You, spawned a slightly worrisome horndog fanbase for the show’s stalker-murderer, played by Penn Badgley — who, as it happens, slightly resembles Bundy.

But apart from their cynicism about Netflix’s promotional strategies, how exactly do the incel boys feel toward Ted Bundy? It’s… complicated.

Right now, with people semi-seriously discussing his attractiveness, they sound a bit jealous. To some, he’s a case study in the so-called “halo effect,” in that women are drawn to his looks despite any other red flags. “Women thought he was handsome, normal looking, and thought nothing of getting into his car,” one incel remarked. Another was critical of Bundy’s appearance but theorized that it was good enough to earn trust. “I think that this is more proof that you can ascend as long as you have a decent normie face and a good height,” he wrote. “Even if you spell it out for them, they will still go for Chad,” a third man commented — referring bitterly to the incels’ archetype of a desirable alpha male.

Oddly enough, the incels may buy too much into the popular media narratives of the Bundy saga — that it was his handsomeness, charisma and intelligence, a suite of alpha-guy qualities, that allowed him to kill at least 30 women before he was caught. The truth is Bundy’s societal privilege helped a lot more, and our concept of him as an embodiment of superhuman evil is just a myth. Bundy had nothing that plenty of self-described incels don’t. Moreover, his preferred method of abduction involved a put-on weakness that would place him in the incels’ “beta male” category: He’d wear a cast or walk with crutches, faking disability so as to seem like less of a threat.

All the same, the incels have managed to envy Bundy’s ability to get close to women and the attention he received from them once incarcerated — as if either exemplifies the kind of human connection they claim to want. Likewise, they take the recent horny tweets as literally as possible, when most are simply transgressive jokes. Bundy is long dead, anyway, and, even given the opportunity, very few people who know what he did would want to be alone with him. As with quite a few incel fixations, they’re choosing to get mad over something purely theoretical that has no bearing on their life whatsoever. They also like having “evidence” that women are irrational and unreliable judges of character, and tacitly blaming Bundy’s victims for their grisly fate is a reflexive gesture. 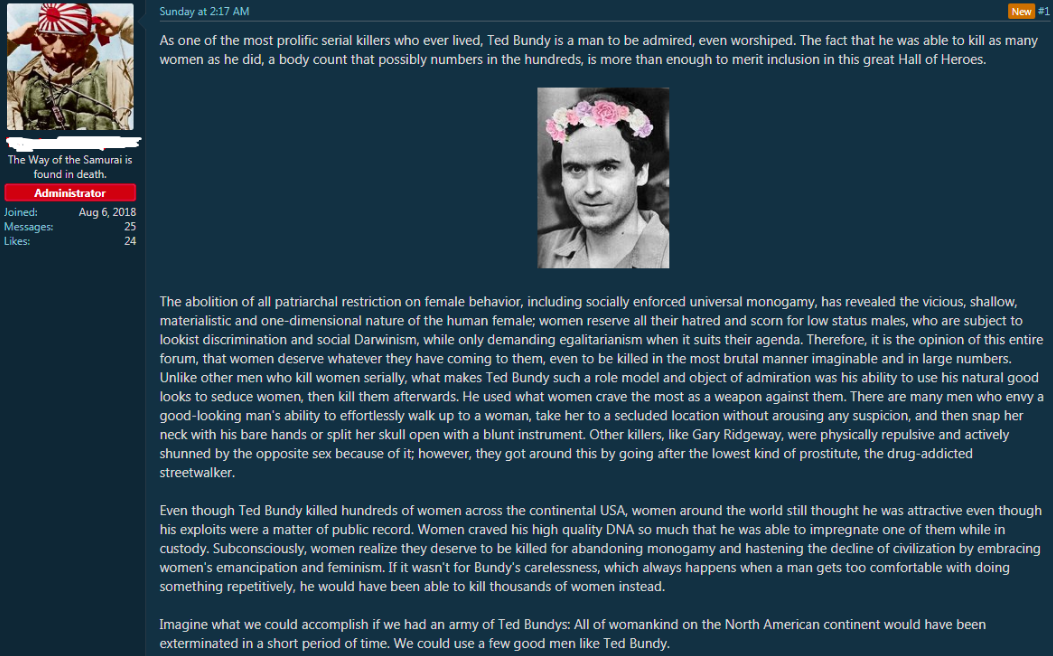 What’s even scarier is the guys who don’t moan about how good Ted had it, choosing instead to praise him as a hero. This is the logical extreme of the incel mindset — the extreme and violent misogyny that spurred Elliot Rodger’s murder spree in 2014 and last year’s deadly Toronto van attack, allegedly carried out by Alek Minassian. At this ideological stage, men have given up entirely on securing a sexual relationship for themselves and declared all women to be enemy combatants. “Imagine what we could accomplish if we had an army of Ted Bundys,” one incel has written. “All of womankind on the North American content would have been exterminated in a short period of time.”

Which goes to show, perhaps, that certain incels are happy to embrace a Chad, so long as he’s carrying out their agenda. A man who kidnaps, rapes, murders and dismembers women can be viewed as something higher than an oblivious alpha — he is an evolutionary corrective to a world in which women have attained a measure of agency and independence.

Let’s hope nobody on the edge takes inspiration from his story.