If the tech industry has its way, a computer program will be locking you out of your apartment because you were five minutes late on your rent payment

In 2018, CEO, lawyer and cryptocurrency millionaire Jeffrey Berns purchased a 68,000-acre piece of land in Nevada, where he plans to build a city-size innovation park based around blockchain, the digital ledger technology that allows the secure transfer of data between parties. “It will be a high-tech, high-security park, an R&D facility that will incubate four life-changing technologies together,” Smart Cities World reported Berns as saying. The basis of the smart city, he said, was to be “doing things that have never been done before.”

Part of Berns’ approach includes the implementation of “smart lock technology.” Which is why in June of last year, he acquired German firm Slock.it, a company that since 2015 has been working on the development of smart locks connected to the Ethereum blockchain (one of the many decentralized platforms that utilizes blockchain technology) that would use smart contracts to handle access-control permissions.

In a recent article I wrote about the socialists trying to reclaim cryptocurrency, I noted that, “what distinguishes a smart contract from a regular digital contract is that it’s self-enforcing: It’s not the sort of computer program that makes a recommendation to a person about how they should control a digital asset, but rather a program that controls the digital asset itself.” According to a Medium blog post from CoreLedger, a blockchain company, the “critical advantage of a blockchain-enabled smart lock is that there are no instructions sent between the user and the lock directly.” “The lock will read the state of its smart contract,” per the Medium post. “It will know whether the user paid or not and will open accordingly.”

In other words, the lock uses its own coded discretion in deciding when and for whom to unlock.

On the surface, this technology may seem fairly innocuous, a natural evolution in the capabilities of coded blockchain technology. But if this “smart city” becomes a sign of what’s to come, it could spell a tectonic shift in the way landlords carry out evictions: In the same article about blockchain socialists, one of the people I spoke to suggested that smart lock technology could potentially be leveraged by landlords to more easily lock out tenants in the case of an eviction.

This makes an already terrible crisis — we live in a time when 28 million Americans face the possibility of being removed from their homes because they can’t afford rent — that much more terrifying. Currently, landlords are having to do the dirty work themselves — for example, in California, landlords are personally locking out their tenants or leaving “vulgar voicemails threatening to remove” them, per a report in The Guardian. According to a report in the Houston Chronicle, similar events are happening in Houston, where landlords are locking out tenants even though the move, “directly contradicts guidance from apartment industry executives and government leaders who have urged landlords to work with families struggling to pay rent with the local economy at a standstill.” Now imagine how much worse things will get if landlords never even have to show up in person.

The way evictions work is different in every state, but at a basic level, a landlord has to notify a tenant first. If the tenant hasn’t paid their rent and doesn’t respond to the eviction notice, the landlord may file a lawsuit alleging forcible entry. “The case will be tried as a summary proceeding in a matter of weeks after the landlord files the lawsuit,” according to FindLaw. “If the tenant does not show up to defend the charges, the judge will make a default judgment of guilt.” In some states, the judge can order for a tenant to be evicted immediately at the end of the trial. All of which is to say, currently, there’s at the very least a fairly strenuous process in place for removing a person from their home. But in a smart city, much of the in-person processes could be removed in favor of an entirely digital eviction process. When a person is late on rent, a smart lock connected to the blockchain can itself decide to lock the tenant out of their apartment, immediately.

Adam Henschke, an applied ethicist working on areas that cross over between ethics, technology and security at the Australian National University, tells me that one of the concerns that people like himself have with smart cities is exactly this — the power that such technologies have over access to basic goods and services. Henschke admits that while it’s not uncommon for landlords to have the power to change people’s locks as part of normal eviction processes, this technology obviously raises a bunch of other issues.

His first concern is that it could be psychologically easier for a landlord, real estate agent or building manager to lock a person out. “If this is done in person, then whoever changes the locks likely has to confront the tenant in person,” says Henschke. “Whereas, as this is being done remotely, it can be psychologically easier to make the decision to lock the tenant out.”

His second concern pertains to late payments. “Let us imagine a scenario where a person’s rent is deposited, but if it’s late — even a minute late — this could automatically cause the house to lock people out remotely,” says Henschke. “Here, the relevant difference is that no humans are involved in the specific decision to physically change access.” This, he says, makes it even easier psychologically for a landlord to absolve themselves of moral responsibility, since the eviction is simply a program doing what it’s expected to do. “Further, there is a real risk of technical glitches, causing people to be automatically evicted,” he says. “For instance, if there is some problem with the bank transferring rental payment, even if the renter paid rent, automating the process means that those technical glitches can automatically become real issues.”

Not everyone is convinced that smart lock technology built on the blockchain is so different from the current system by which landlords evict their tenants, however. “I’m not really sure what the difference is between a landlord changing the combination for a door versus the landlord physically changing the lock,” says Fritz Allhoff, a philosophy professor at the University of Western Michigan. “Either way, the landlord’s going to own the property. Either way, the landlord has various ways of locking a tenant out.”

Additionally, Allhoff tells me that since there’s all sorts of legal protections already in place — “You’ve got to give the tenant notice, the tenant’s got to have the opportunity to appeal, and so forth and so on” — when we migrate into this digital environment, all of those protection are going to stay in place. “Maybe we’d want to tinker with it at the edges,” says Allhoff. “There might be some nuance in the technology application where maybe the old rules wouldn’t quite get at what we’re trying to get at. But I think by and large, the general concepts stay the same in terms of advanced notice, in terms of appeal, in terms of redress and suing for damages. All that stuff stays the same.”

Allhoff is right, of course. But let’s not forget the way large amounts of cash can influence or even bend laws in this country. The entire tech industry apparatus is a perfect example of who’s really deciding which laws govern us: Berns paid $170 million in cash for his 68,000 acre, soon-to-be “innovation park.” It’s hard not to see how that same level of cash can buy influence in deciding which laws can be bent in pursuit of our “smart” future. 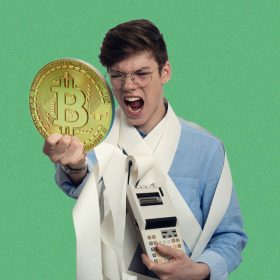 Accountants Are Bracing Themselves for a Crypto-Induced Nightmare Tax Season

How Long Would Your Money Last If You Buried It the Way People Do in Movies?