School Cafeteria Pizza May Be Awful, but It Still Deserves Respect

If you get rid of frozen pizza in school lunches, you may as well ditch the Pledge of Allegiance. Honestly, just do that instead

Sen. Amy Klobuchar is not going to be president. Not anytime soon, anyway. While she’s one of the most popular senators in Congress, her national poll numbers are in the basement. The media seemed to tire of the Minnesotan after publishing stories about her allegedly abusive treatment of staff — how are you going to top that anecdote where she ate a salad with a comb? And, amazingly, when she had the opportunity to lay out a vision for the country in a CNN Town Hall, commentators seized on another food-related liability: Klobuchar’s previous defense of frozen pizzas in school cafeterias.

The senator faced a question on this from Thomas Satterthwaite, a Harvard student who noted that she’d sent a letter to the U.S. Department of Agriculture in 2010 that recommended keeping frozen pizza in school lunches, with the reasoning that tomato sauce is a vegetable — contrary to a new rule overturning that classification. (No doubt the USDA has bad memories of their Reagan-era efforts to obtain vegetable status for ketchup and pickle relish.) Satterthwaite — who I truly can’t believe had nothing better to ask about! — broached this issue as a sort of gotcha, saying that Klobuchar wrote the letter in hopes of protecting Schwan Food Co., a Minnesota brand that supplies a good number of frozen pizzas to schools. In response, Klobuchar reiterated that she was trying to save jobs during a recession, but apologized (again) for the faulty nutrition fact.

Well, here’s the thing. I don’t give a shit if tomato sauce is a vegetable. Though, for the record, it’s obviously not! But frozen pizza belongs in school cafeterias regardless. I’m sure you’re already rolling your eyes — “Oh, there goes Miles on another one of his shitty food takes, like when he defended your co-worker who microwaves tuna fish, or the flavor profile of American cheese” — and I could not possibly care. Because I was right about those things, and I’m right about this. If you get rid of frozen pizza in school lunches, you may as well ditch the Pledge of Allegiance. Honestly, just do that instead.

It’s laughable to be arguing over whether cafeteria pizza has vegetables or not when it’s questionable to even call it pizza. Yes, there’s some dough, some red stuff and some dairy product melted on top — I just don’t think it adds up to Neapolitan cuisine, any more than a depressingly authoritarian rectangle shape makes it “Sicilian-style.” As you may have gathered by now, I do agree that this stuff is terrible; I just also think it’s essential. Even I, growing up in the Pizza Belt, felt like the one day a week my cafeteria served up these barely thawed slabs of carbs and salt was something to live for. Judging by the Facebook page for “Public School Rectangle Pizza,” I was not alone.

The triumph of this awful pizza is twofold.

The first part involves symbolic value. Pizza is a party: It’s what you get to eat when your parents are out for the night or don’t feel like force-feeding you brussels sprouts, and it demands to be eaten with your hands. And pizza is morale: It is freedom from the drudgery of another school week, the sign of momentum toward a sacred Saturday.

The second element is more pragmatic, though just as important: Bad as this pizza is, everything else your cafeteria serves is objectively worse. Pizza wins. 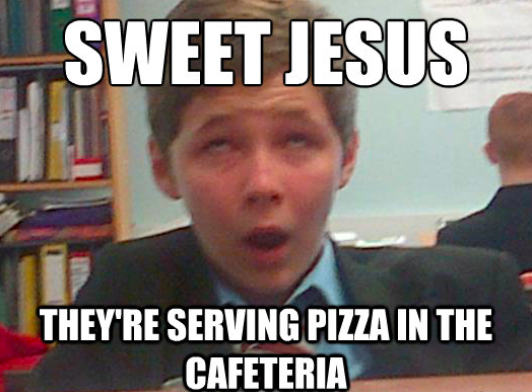 Are we really going to deprive our youth of this slender ray of hope within our increasingly militarized education system? All because it’s not healthy? It’s not trying to be! Cafeteria pizza doesn’t make your kids big and strong, it gives them the fortitude to endure third-period algebra, secure in the knowledge that some reward, however meager, awaits them at lunchtime. We learn to appreciate cafeteria pizza so that when we grow up and have access whatever pizza we like, we never take that for granted.

But bland pizza on its own is the perfect blank canvas for aspiring chefs. A slice is a forgiving vehicle for all sorts of inventive toppings: Texas Pete hot sauce, a dash of ranch dressing, even some vending-machine Bugles. It’s a gateway to more sophisticated culinary creativity down the road.

As long as we’re doing basically nothing to prevent children from being shot in schools and failing to sustain the illusion of a meritocracy that defines their academic success, we can let them have this unappetizing yet strangely satisfying pizza. Serve it with a side of boiled peas if that’s what it takes for the USDA to sign off. But, for god’s sake, do not use your 30 seconds of time during a CNN town hall to trash a food that functions as a spiritual life raft for the struggling next generation — especially if the candidate you’re talking to already clarified her position on it! And that’s the last I want to hear of the subject! I swear, those cold mozzarella sticks don’t get half this level of disrespect.