Ranking Meat Alternatives by How Healthy(?) They Are

Tofu? Seitan? Beyond Meat? Which will make me healthy enough to forget about how much I miss eating real meat?

Despite what some meatheads believe, science shows that plant-based eating can save your heart from a cholesterol-induced implosion, and more importantly in the grand scheme of things, the world from a carbon-induced explosion. The problem is, humans (Americans, in particular) love munching on animals.

But nowadays, even the most tenacious vegetarian headshakers can find a meat alternative appealing enough to appease their cravings for sweet, juicy flesh. Thus, considering the abundance of healthy promises associated with plant-based eating, the question for many has become, if I’m going to make the switch, which one is actually worth the sacrifice of giving up meat? In search of answers, I asked Dana Hunnes, senior dietitian at the Ronald Reagan UCLA Medical Center, to help me rank various popular meat alternatives (and substitutes) by how healthy they are — from superfood to meh.

First, though, Hunnes explains her ranking criteria: “When I ‘rank’ meat alternatives, I look for a few things: (1) the number of ingredients; (2) the number of additives; (3) the quality of the food item itself; and (4) things like mouthfeel and texture, but I definitely use those as the last ranking criteria. Since these are all plant-based, nearly all will be, without a doubt, better than animal proteins and the fats that come with them.”

One other thing: While beans and legumes might not be marketed as one-to-one meat substitutes like tofu and tempeh, Hunnes says they could easily make the number one spot on this list. “These, of course, are all-natural, full of healthy protein and fiber and contain no added salt,” Hunnes explains, adding that beans and legumes also have a super low carbon footprint. “One hundred grams of beans have around 21 grams of protein (some have more, some have slightly less), whereas 100 grams of chicken has 30 grams. So for anyone concerned about protein content, beans and legumes (pulses, as they’re called in other countries) are great.”

Just something to consider. 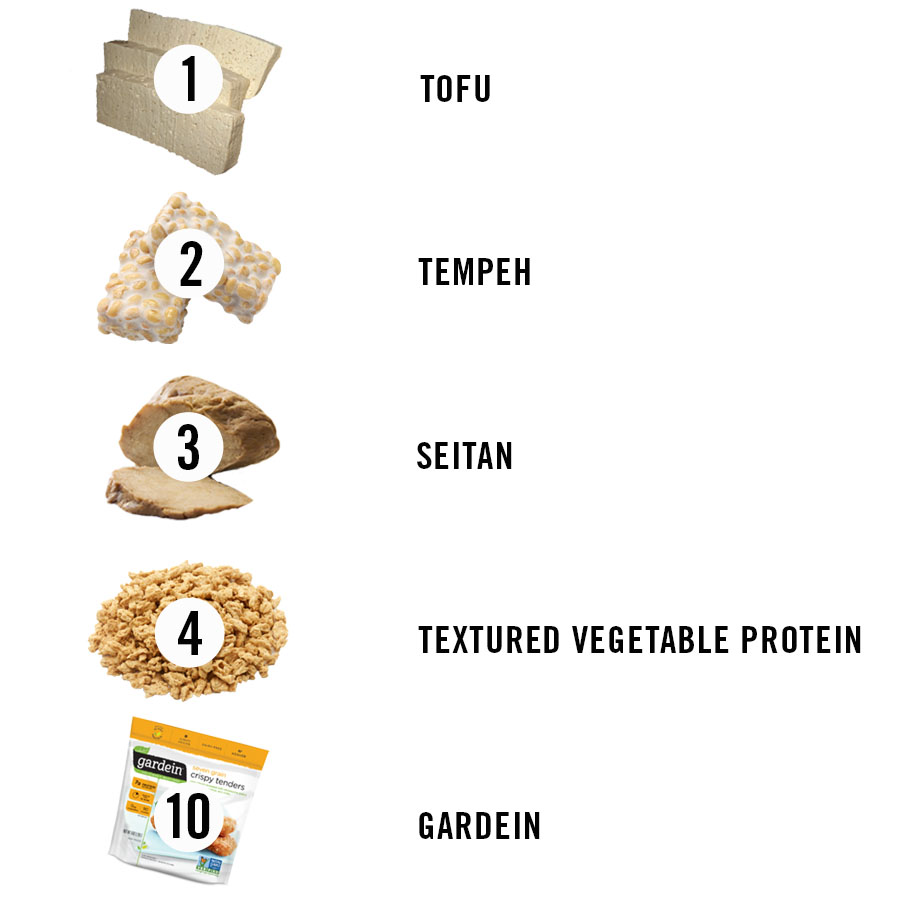 1) Tofu: Perhaps the most notable meat alternative, tofu is essentially a hunk of soybean curd. “It’s a similar process to making cheese from cow milk,” Hunnes explains, “except you make tofu curds from soy milk — we made it at home a couple times”

Besides being somewhat easy to make, tofu is also especially healthy. “It frequently has added calcium, which is good for bone health,” says Hunnes, adding that it can also be immensely low in sodium. “Tofu is often high in protein and nicely absorbs the flavors of whatever you’re cooking. Depending on the texture — soft to super firm — it can mimic the mouthfeel of animal proteins.” In fact, tofu contains more protein per calorie than ground beef.

Finally, for any meat-leaning propagandists out there, no, tofu does not contribute to the growth of man boobs.

2) Tempeh: Similar to tofu, tempeh is a fermented soybean cake. “It’s incredibly good for you, as fermentation may help with absorbing some of the fibers and act as a probiotic or prebiotic,” Hunnes says. “It’s also high in protein, like tofu, beans and legumes. Texture-wise, though, tempeh isn’t much like meat.”

3) Seitan: Not to be confused with Satan, who sits atop a whole other kind of ranking, seitan is a protein made from wheat gluten. “I ate seitan a lot when I went vegan in the early 2000s,” Hunnes shares. “It has a very chewy texture, akin to meat, and it can be cooked in many ways. If you’re allergic to gluten or have celiac disease, this will not be a food you can eat, but it’s extremely high in protein. I’d go for organic if possible, though, since some people seem to have a bad reaction to some of the pesticide residues that may remain on conventional wheat products.”

4) Textured Vegetable Protein: Made from soy flour, textured vegetable protein is often found in pre-made meat substitutes, like frozen veggie burgers or meatless “chicken” tenders, but you can also buy it plain. “It’s akin to a bean flour and can be cooked or added to foods to provide extra protein,” Hunnes explains. “It’s low in sodium and high in protein. The mouthfeel likely won’t remind you of meat, but it’s still good for you.” Much like many other items on this list, textured vegetable protein is also particularly high in fiber.

5) Jackfruit: Jackfruit has a texture almost identical to pulled pork, which has made it a particularly popular ingredient in vegetarian sandwiches and tacos. “This is a single-ingredient food, so I like that,” Hunnes says. “It has minimal sodium, but since it’s so low in protein, I put it down here.” On the plus side, though, jackfruit is packed with vitamins and minerals that some of the above meat alternatives are lacking, meaning this is a great addition to any dish, so long as you can make up for the lost protein.

6) Mushrooms: Another popular meat alternative (think portobello burgers) thanks to their umami flavor, mushrooms in general are super freaking healthy. But similar to jackfruit, they lack the protein that one might hope to garner from the centerpiece of a meal. “Again, like jackfruit, this is a single-ingredient food, and it’s low in sodium,” says Hunnes. “So those are good. But it’s extremely low in protein and doesn’t have the mouthfeel of meat.”

7) Beyond and Impossible Meat (tied): “These are high-calorie, high-protein meat analogues, meaning they’re meant to mimic the taste and mouthfeel of meat,” Hunnes says. “While I personally love almost everything about them — from the flavor to the texture — they’re high in sodium and have a lot of added ingredients. They’re great for burgers or tacos, for example, but since they tend to be relatively high in plant-based saturated fats, which are sort of neutral fats, I’d say they’re not something to be eaten every day. These are still far healthier for you and the planet than animal meat, and they have the best mouthfeel. But among the other items on the list, these aren’t number one.”

9) Tofurky: According to Hunnes, similar to the Beyond and Impossible meat substitutes, “Tofurky has a lot of added ingredients and salt for what it is. This is similar to number eight on our list in the sense that it’s way better for the environment and our health than animal proteins, but are there better options on the list? Sure.”

10) Gardein: “Again, these products are high in protein, but it’s also way too high in salt and other additives for my taste,” says Hunnes. “This is better for you than any animal protein, but again, there are better choices above.”

Just to give you an idea of the excessive number of ingredients and additives that can go into these products, let me list the ones in the Gardein Seven Grain Crispy Tenders:

As I’ve learned from writing many a “What’s in This?” column, it’s very rare for a packed ingredient list to be a good thing.

Now that my fingers are bleeding and my point has been made, I’m gonna go stuff my face with beans until I feel better.