The workplace regulator is a breakout star on... Tumblr?

In 1971, the Occupational Safety and Health Administration was established within the Department of Labor, and charged with protecting workers from injury by enforcing standard conditions at job sites. Fifty years later, OSHA made its unlikely debut on Tumblr.

It wasn’t anything splashy — in fact, it was rather formal for a social media platform that has such eclectic, youthful vibes. It simply quoted the General Duty Clause of the OSH Act: “Each employer shall furnish to each of his employees employment and a place of employment which are free from recognized hazards that are causing or are likely to cause death or serious physical harm to his employees,” reads the clause. 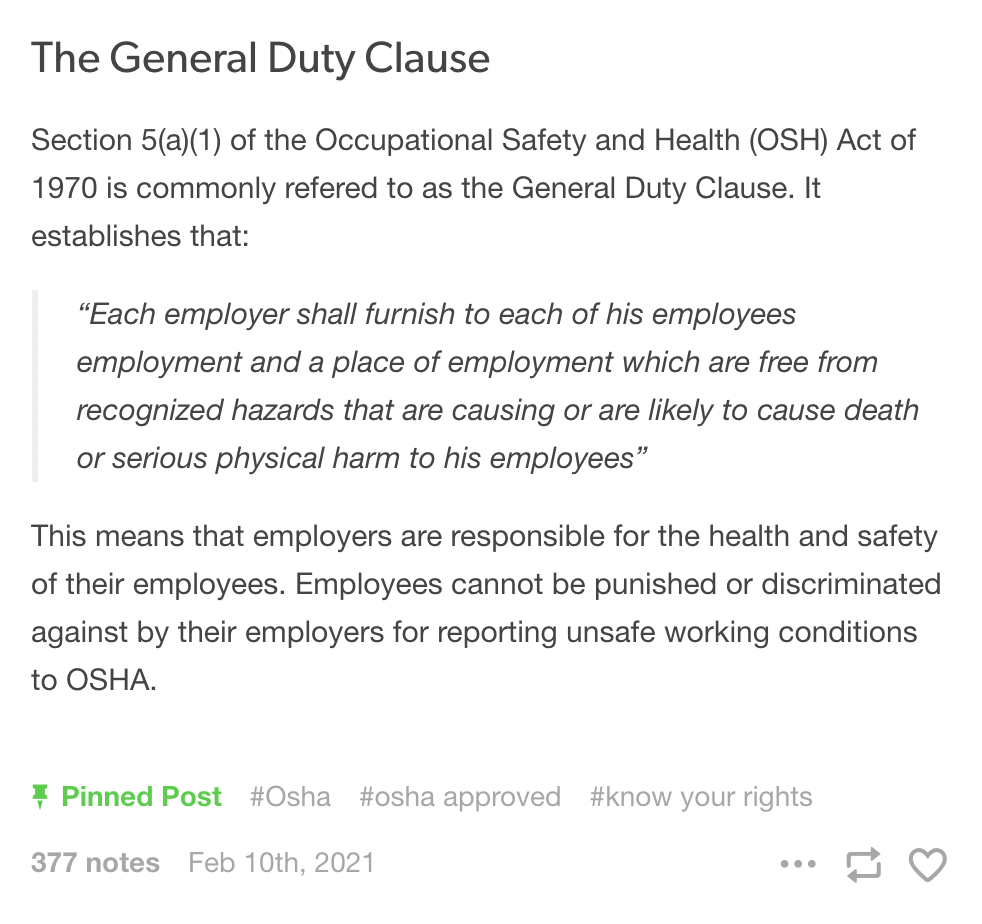 So far, so predictable. The OSHA Tumblr account seemed on track to become an extension of the agency’s Twitter feed, which offers education and outreach in the form of checklists, infographics and support links. But that same day, the architect of the blog revealed an interest in engaging the Tumblr community on its own terms, sharing a post that envisioned a twist to the popular video game Among Us. The original premise has a spaceship crew trying to repair their vessel while they’re stalked by one of their own — a deadly imposter. What user prokopetz suggested was a version of Among Us where the imposter sets up the crew to commit OSHA violations that may prove fatal to them. OSHA stepped in to relay the consequences of such willful sabotage: a fine of up to $250,000 for each instance. 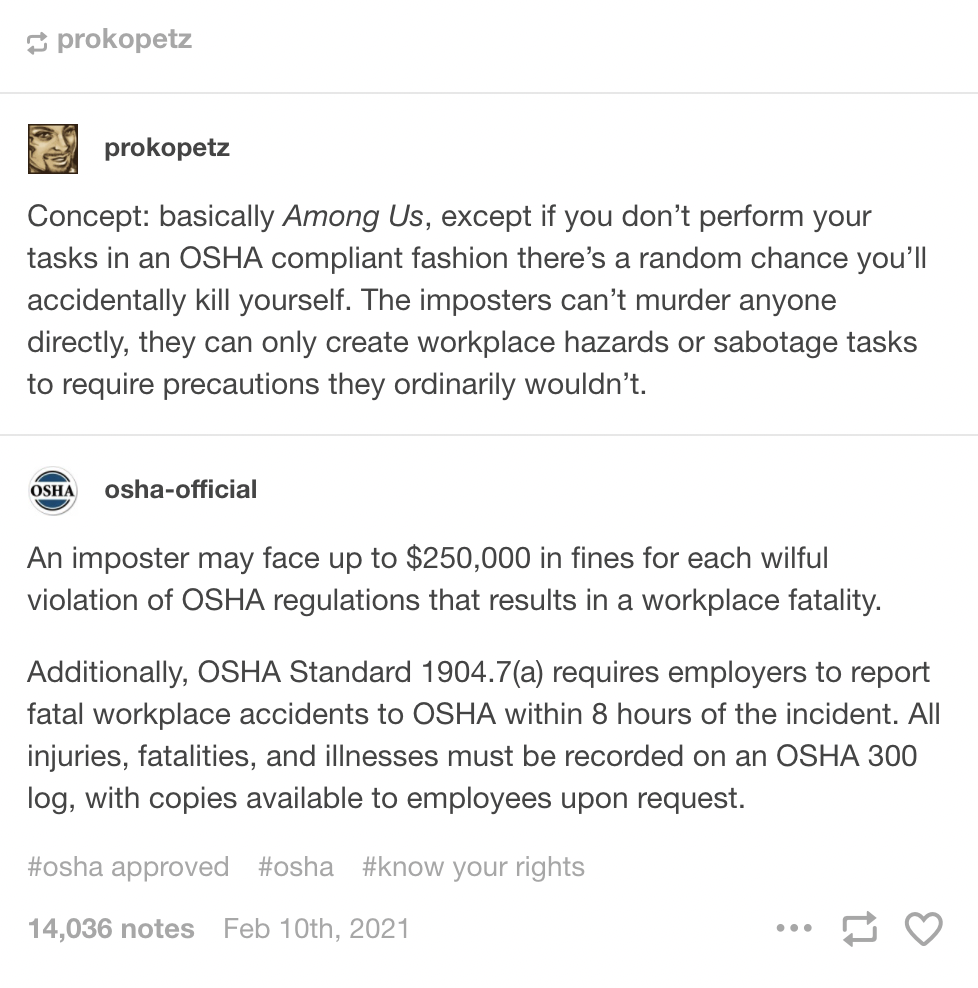 How curious. We don’t expect bureaucratic institutions — perhaps least of all the regulatory ones — to have a sense of humor about what they do. Yet over the months that followed, OSHA came into its own as a gamely funny Tumblr presence, beloved by all who discovered it. They reblogged a GIF of a grizzly bear setting up a safety cone that had been knocked over. They considered someone’s picture of a lube bottle that had “OSHA Approved” written on it in pen. (The preferred term, they explained, is “OSHA Compliant.”) To a meme captioned “construction worker starter pack,” including various stimulants and painkillers, they added certificates from OSHA training courses. And they weighed in on whether a squirrel needs protective goggles. 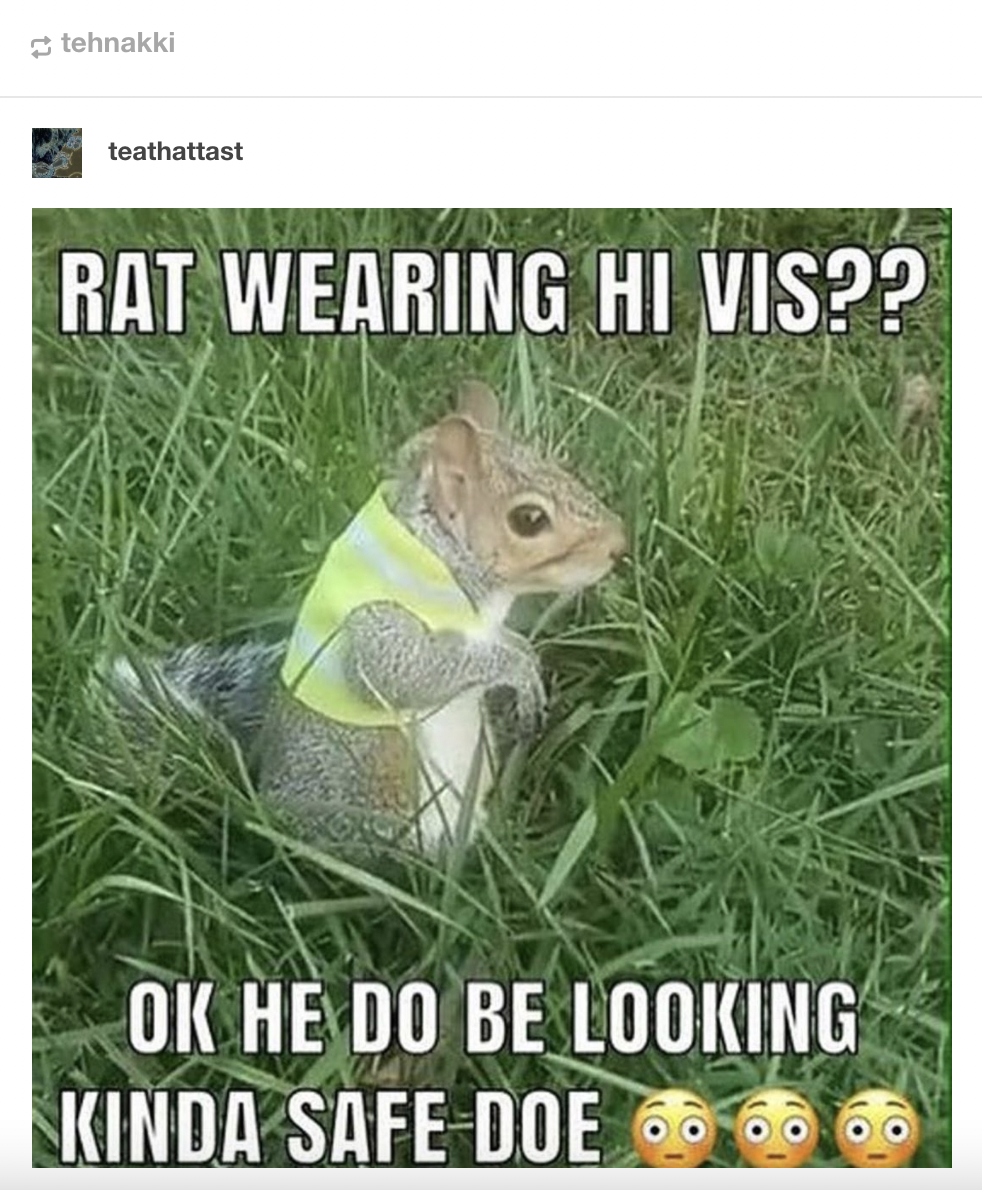 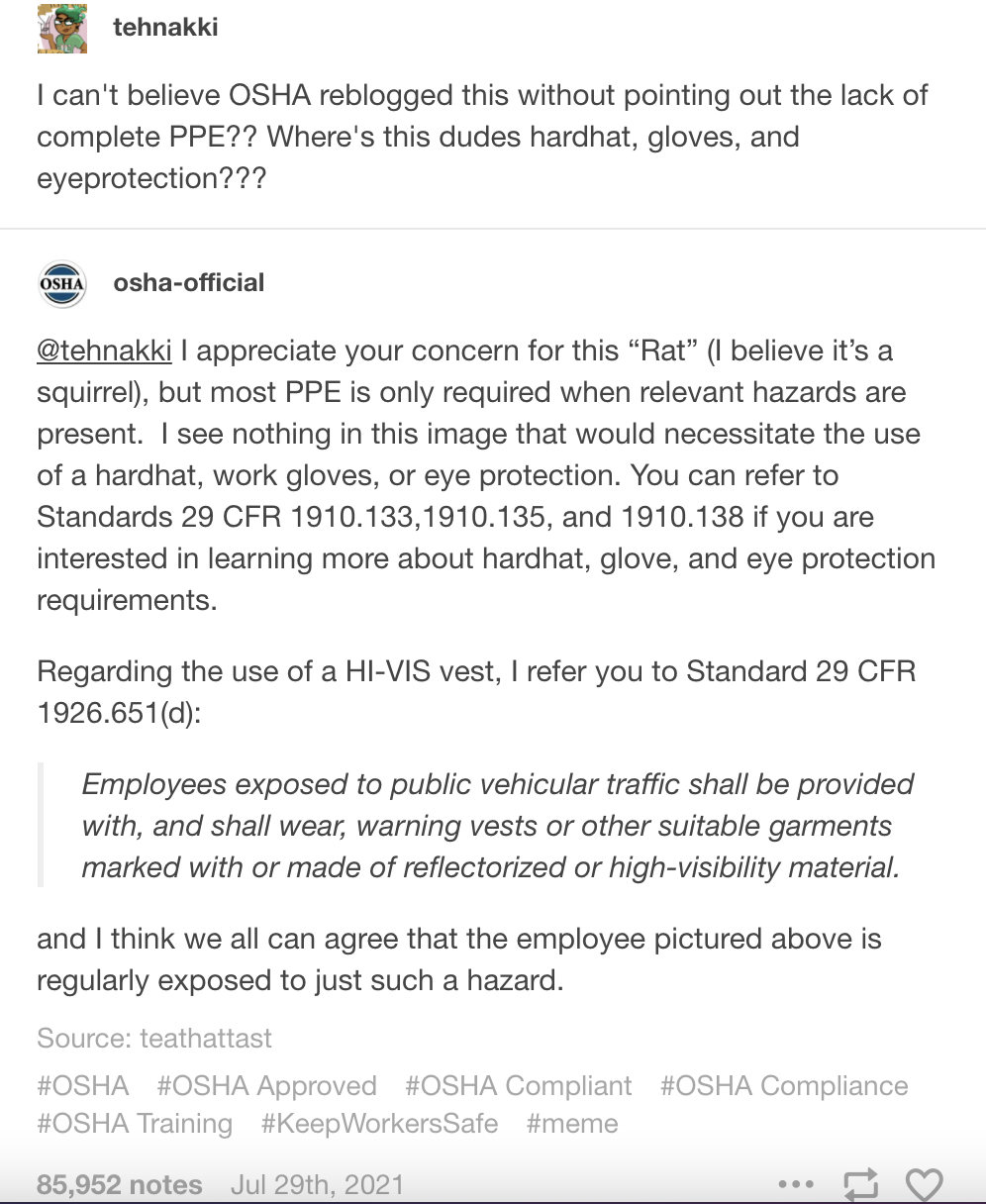 Somehow, the deadpan affect of a meticulous rule-master turned OSHA into a perfect straight-man foil for Tumblr’s chaotic energy. I’m not sure we’ve ever seen anything like it in the history of federal law. Amid informative posts on whistleblower protections and the right to refuse work due to unsafe conditions, they sprinkled memes like “Tag Yourself: Common Worksite Ladders” (complete with an official disclaimer on its contents) and fielded a question from someone who wanted to build an OSHA-compliant village in Minecraft. The main takeaways: guard against falls, provide PPE and practice special caution with equipment. 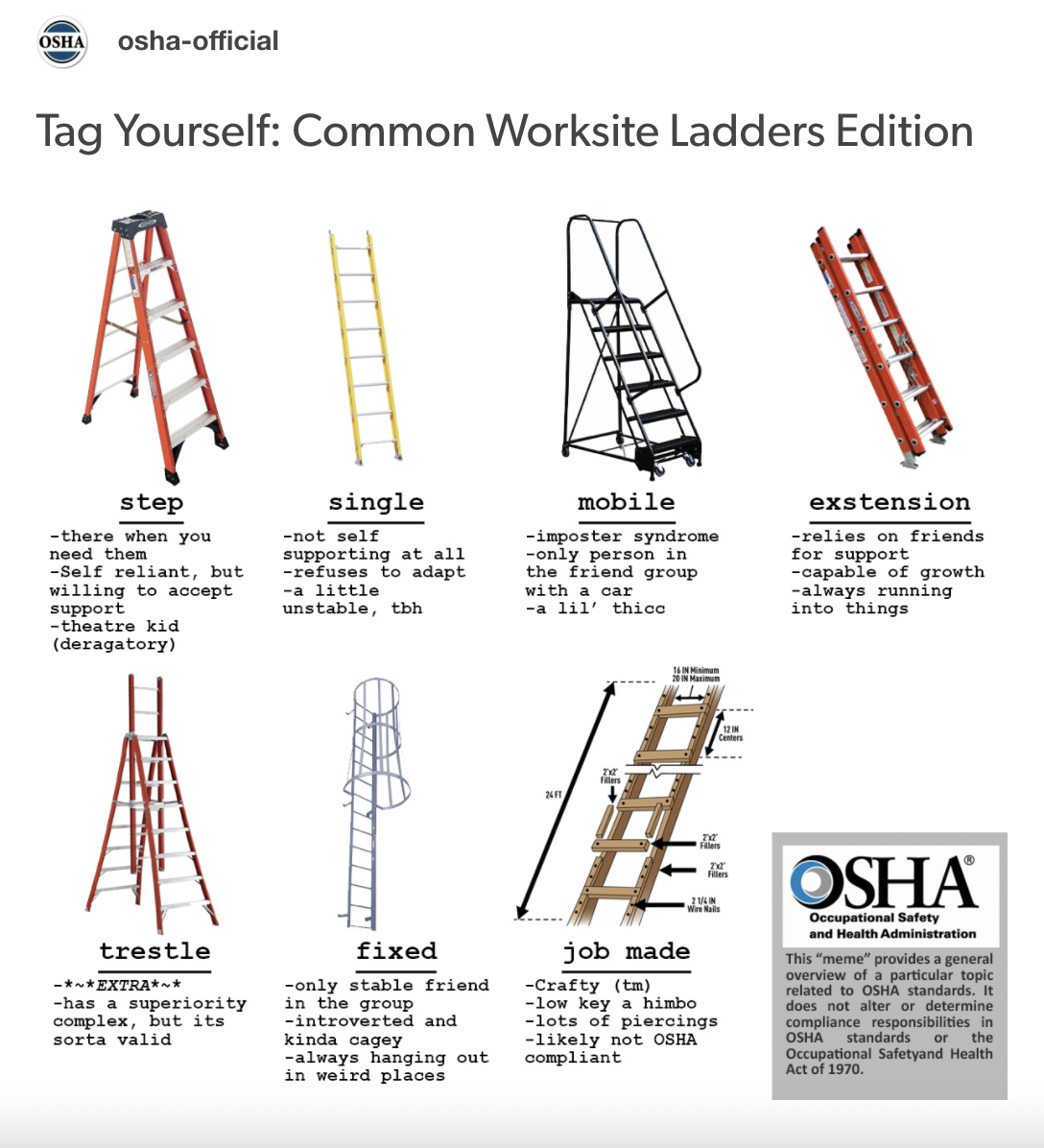 If the folks at OSHA can have this much fun with their work, then what excuse is there for the rest of our government to be such dreary mopes? It didn’t take much for the younger generations on Tumblr to suddenly get interested in workplace safety — just someone willing to speak their language — the tags suggest that an intern named Bradley may be leading the way. With that small effort, thousands of Americans began to learn how the system can protect them instead of screwing them over: When a firing is illegal, if there’s a code that pertains to water collecting on the floor in a restaurant, which jobs require an employer to provide specialized footwear and how to submit an official complaint to OSHA. 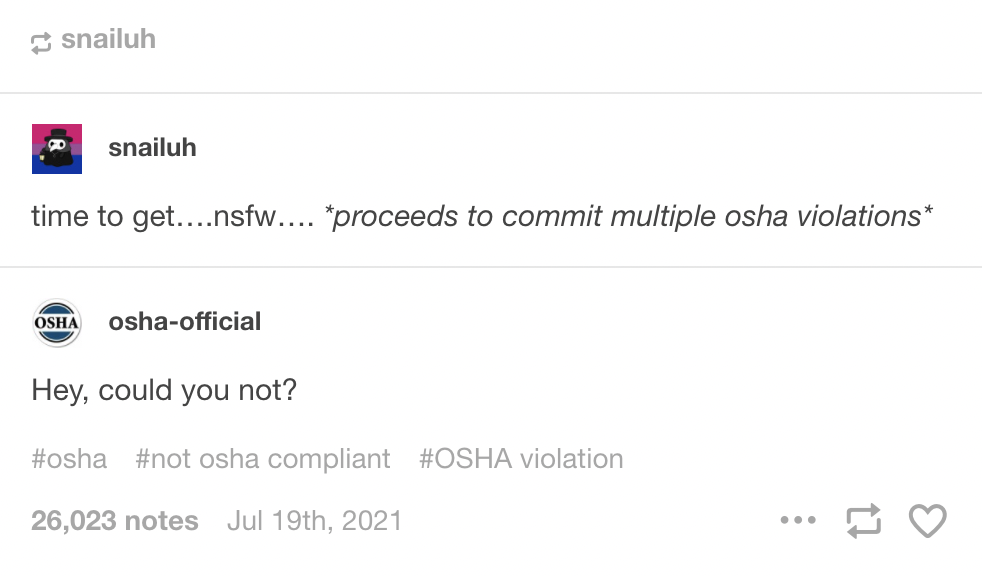