Does the long and bloody road of Mario Yamasaki end in redemption?

From the starting bell, Priscila Cachoeira looked like a new swimmer dumped into a deep-sea tank at the aquarium. Circling underneath her in that metaphoric tank was Valentina Shevchenko — a rising star in the Ultimate Fighting Championship with virtuosic hands and a track record of facing some of the toughest women in the promotion. She had more wins in the UFC than Cachoeira had fights in her entire minor-league career up to that point.

And, as many expected, the beatdown developed without hesitation. Shevchenko was merciless on her feet and brutal on the ground, wrestling “Pedrita” into compromising positions and smashing her face ad nauseam. Just five minutes in, the commentators were beginning to wonder, out loud, how much longer the fight could go on. And in the second round, it looked like the end had arrived, as Shevchenko mounted Cachoeira and rained more blows down upon her.

But the fight didn’t end. Referee Mario Yamasaki was there, peering into the bloody mess without signaling for a stop. Shevchenko’s fist hammered down again and again in stubby strikes. Yamasaki kept staring. Finally, after 30 long seconds, the Ukrainian slipped her forearm under Cachoeira’s throat and applied a choke. The bloodied Brazilian tapped out, signaling submission. The fight was over — and Yamasaki didn’t make the call himself.

The blowback was immediate and overwhelming, and almost all of the flak landed on the referee, who tried to defend his action (or lack thereof) by noting that he “allowed ‘Pedrita’ to be a warrior and keep fighting.” UFC President Dana White, who had lambasted Yamasaki’s performances in the past, blew his top and announced the veteran ref would “never set foot in that octagon again.”

For fans, it was the perfect summation of everything terrible about Yamasaki’s time as a ref in the UFC. He had developed a reputation as an inconsistent decision maker who jeopardized fighters by letting them get beat up too much. Now, the reputation had the perfect reason to stick for good.

Three years have passed since that disastrous Shevchenko-Cachoeira fight, and Yamasaki hasn’t returned to the octagon since. Turns out that White’s tantrum really did have an effect, as Yamasaki faded from public view, declining to apply for any more UFC fights and only moonlighting at a handful of tiny events. But he re-emerged last month, telling MMAFighting.com that he’s hoping to regain his license in 2021 and hopefully referee some bigger fights, whether it’s in the UFC or a competing promotion like Bellator.

It’s a momentous fork in the road for a guy who is among MMA’s most recognizable characters. In one sense, Yamasaki is a genuine pioneer who helped shape a budding sport over the course of 20 years. In another, he’s perhaps the sport’s greatest villain, serving as a lightning rod of constant criticism from fans, fighters and Big Boss White.

The truth of Mario Yamasaki lies somewhere in between, with his personal arc reflecting the evolution of MMA from a no-rules bloodbath in the 1990s into a respectable, mainstream cultural force in the 2000s. Will he make a comeback this year? That depends on whether he can shed his reputation as an inattentive referee suffering from a bad case of bloodlust. Any time you speak of the guy, an army of sarcastic MMA fans shows up, ready to crack jokes about how Yamasaki is an arbiter of pain and suffering. The YouTube compilations of his “worst moments” have hundreds of thousands of views, plus page upon page of wisecracks at his expense.

Strangely, once you actually go through the list of Yamasaki’s worst decisions, you start to hear repeated references to the same half-dozen bouts, spanning more than a decade. That doesn’t mean he hasn’t had more subtle failings in other matches. Yet comparing the tsunami of meme’d insults at his expense to the actual list of certifiable mistakes is an exercise in disappointment. At this point, it’s clear the idea of Yamasaki as a terrifying — even dangerous — ref has grown into a caricature that stands in his place, frozen into online culture for posterity. 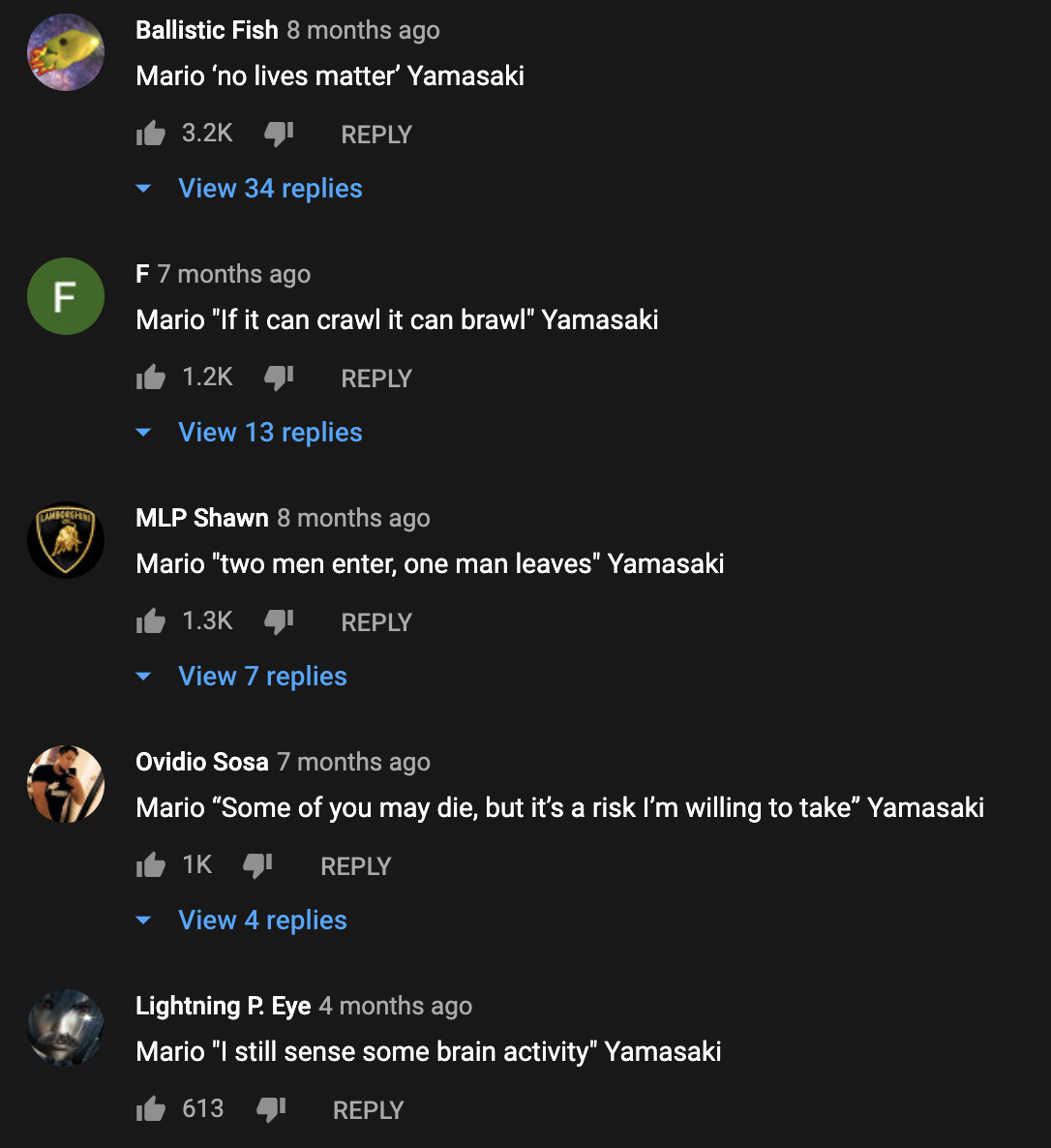 The late stoppages are bad, surely; it’s still hard to watch the Shevchenko match, and there are other instances in which Yamasaki could’ve credibly waved off the bout, citing overall damage to one fighter rather than mercilessly waiting for someone (or their coaches) to tap out. But when he’s not ending fights too late, he’s apparently ending them too early. In 2012, Yamasaki had to face a symphony of hate for disqualifying a fighter for illegal blows to the back of the head of his opponent. In 2017, fighter Michael Chiesa complained mightily after Yamasaki ended his fight with Kevin Lee, throwing insults at the ref for not letting him just get choked longer. (“For once Mario did something right and he is still getting pissed on,” as one commenter summed up on YouTube.)

Being a referee is a thankless job in any sport, but it’s doubly difficult in MMA, which has an immense set of rules that can change between states and promotions. Yamasaki is no rube. He’s a brilliant and dedicated martial artist, with a fifth-degree black belt in Brazilian jiu-jitsu and more than a dozen schools — an accomplishment that most UFC fighters can’t even dream of achieving. To that point, he became UFC’s most infamous referee by initially putting in his time for little to no pay, in an era when the promotion was a fringe brand struggling for legitimacy.

Yet despite this pioneering experience, Yamasaki had the guts to hear the criticism, step away from refereeing and actually look for more mentorship and training after 2018. He went further and apologized for his excuses after the Shevchenko bout: “I told ‘Pedrita’ in the locker room that I wouldn’t stop the fight if she was defending herself. She moved every time I said I was going to stop the fight, but I really should have stopped it earlier so it wouldn’t have [been] controversial. It was no one else’s fault but me.”

The truth is, it was everyone’s fault, not just his. Where was the criticism for the horrendous matchmaking, which wasn’t Yamasaki’s call? Where were Cachoeira’s coaches, who should’ve seen an irredeemably violent loss on the way as soon as the first round ended? Why didn’t White, look at himself in the mirror after that fight and come to terms with why the UFC made fans pay for that garbage?

Instead, it’s always been the referee taking the blunt force of discourse — a tradition almost as old as sport itself, and magnified in the violence of MMA. No wonder the most recognized names in the game are always the most “controversial,” too, be it Steve Mazzagatti, Yves Lavigne or Herb Dean. Heck, Dean is now one of the most beloved in the game, so what does that say about all of this?

Perhaps it just says that Yamasaki and his peers are more than the sum of their mistakes. In a sport that’s more visibly violent and chaotic than even the most spirited of kickboxing matches, drawing the limits has always been a fool’s errand — but one we expect to be executed with genius, time and again. In reality, the difference between brilliance and baffling is hard to see under such glaring lights, especially in a sport that lacks instant replay, timeouts and challenges.

Yamasaki became one of MMA’s most notorious refs because he was among a handful of people with the skills needed to even try and oversee an MMA fight. What was once a bloodsport marketed for its lack of boundaries is now one where we expect officials to be as elite as the fighters themselves. There’s a generational divide in the attitude toward damage, and Yamasaki somehow bridges both eras, for better and worse. Now, in 2021, he has a chance to edit his legacy — if audiences will give him a chance, and recall all the fights that unfolded under his eye safely.

“People always tend to remember the bad moments. If that’s the case, what can I do? It’s like saying Jose Aldo, Anderson Silva, Vitor Belfort — will people remember him for the kick to the face or his entire career?” Yamasaki wondered in 2019. “It depends on who you ask.”