Twenty years ago, male entertainers made a big fuss about piracy and shut down Napster. It didn’t make a difference then. So why does the UFC boss think he’ll win now?

Ultimate Fighting Championship boss Dana White is no stranger to flexing his temper in public, whether it’s lashing out at questioning fans, starting beef with his own fighters (whom he grossly underpays) or endlessly jabbing veteran MMA reporter Ariel Helwani.

To be fair, White’s own swagger as CEO has been instrumental to the UFC brand — it’s hard to imagine a world in which the fight promotion isn’t led by this bald cannonball of a man. He helped take the UFC from an embarrassing, bloody mess of a sport into a leading platform for the world’s greatest athletes. It explains why he’s so possessive and prone to becoming a self-righteous, bloviating bully.

Unfortunately for White, his latest foe can’t be taken down with a silver tongue and the shredding of contracts. It’s a nemesis that he sees as a leech, sucking riches from his kingdom — illegal streamers. And with regard to the much-hyped UFC 257 event airing on pay-per-view this Saturday, White has some fighting words.

“We’ve been one of the leagues that has been so proactive on piracy. I love how cool and tough these guys act on social media because — let me tell you — we’ve caught a lot of people,” White boasted to MMA site The Mac Life last week. “Let me tell you what they do: They cry. They cry and beg not to be prosecuted and all this other stuff… I look forward to the crying and the begging. We’ll see how tough they are when they get caught.”

It’s easy for White to get riled up about this, considering that online piracy is a real drain on the coffers of the UFC, as well as pretty much every other sports and media company that airs live events. One recent study suggests that pirated TV streams strip away some $29 billion in potential annual revenue in the U.S. To complicate matters, piracy has surged in popularity during the pandemic, as the masses discovered they had more time at home and fewer dollars to spend.

A decade ago, a newbie might’ve had to do some careful digging online to find quality pirated streams. Now, you can find the most popular sites on forums like Reddit, complete with stable connections and shockingly high resolution. I’m not surprised White wants to be the hero, donning his pirate-stompin’ boots and bringing thieving nerds to their knees.

In reality, however, it’s a battle that he will inevitably lose — no matter how much crying he claims to witness.

White has yet to clarify exactly how the UFC is ramping up anti-piracy activities in 2021, but the likely tool is The Protect Lawful Streaming Act, a provision hidden inside the newest COVID stimulus bill. The measure makes illegal streaming of copyrighted material a felony crime, rather than a mere misdemeanor, making it easier for law enforcement to pursue pirates. The bill was pushed by Republican Senator Thom Tillis, whose campaign and PAC saw well over $100,000 in donations from various entertainment industry backers (a mere coincidence, surely).

A felony charge sounds like a legitimate deterrent, but only if you ignore how the world of illegal sports streaming operates. It’s no longer as simple as tracing a couple IP addresses back to a house; nowadays, streamers can leverage all kinds of online tools and VPN setups to effectively host streams from all over the world. The biggest pirates can make millions of dollars each year, allowing them to pay for legal maneuvers and reappear again after being “shut down.” Even for smaller operations, the risk of getting prosecuted is slim; the costs and challenges of investigating and catching illegal streamers remains prohibitively high.

White wants to puff up and crow, but the reality is, he’s got few avenues to actually win. So it was at the turn of the millennium, when Lars Ulrich and the rest of Metallica threw a tantrum over broke kids sharing MP3 files on Napster. And so it was when Swedish authorities tried to shut down the legendary Torrent site The Pirate Bay, which is still going strong despite a lot of indignant bluster from government authorities and media companies.

And those pirates that the UFC itself has cornered? They’re doing… something, but it’s not a lot of crying or begging. Most notoriously, Steven Messina — better known as Secludedly online — was caught by surprise in 2014 for uploading hundreds of fights online. He allegedly settled for a staggering $32 million with the UFC, plus a public apology, but as it turns out, Messina only had to uphold the latter. In August, he told the news site TorrentFreak that although he faced harassment from the UFC, he never paid a cent of the settlement, and was never really sorry at all.

“If anything, the UFC should have thanked me for my help in creating yet another platform or avenue for these hard-working athletes to get recognized and to help their own corporation grow, as insignificant it may have been,” Messina said. “Regardless of what they say, they didn’t lose money. That’s simply an archaic bullshit mindset.”

Messina is the biggest fish the UFC has caught for piracy, and he’s out in the ocean, free and talking shit! Not exactly cause for trembling anxiety, especially when you add in the fact that punishing digital pirates is an ugly PR move in 2021. Indeed, the more White talks tough about illegal streams, the more pleasure the internet appears to take in rubbing his nose in it. Take a look at the commentary from the YouTube clip of White threatening pirates: 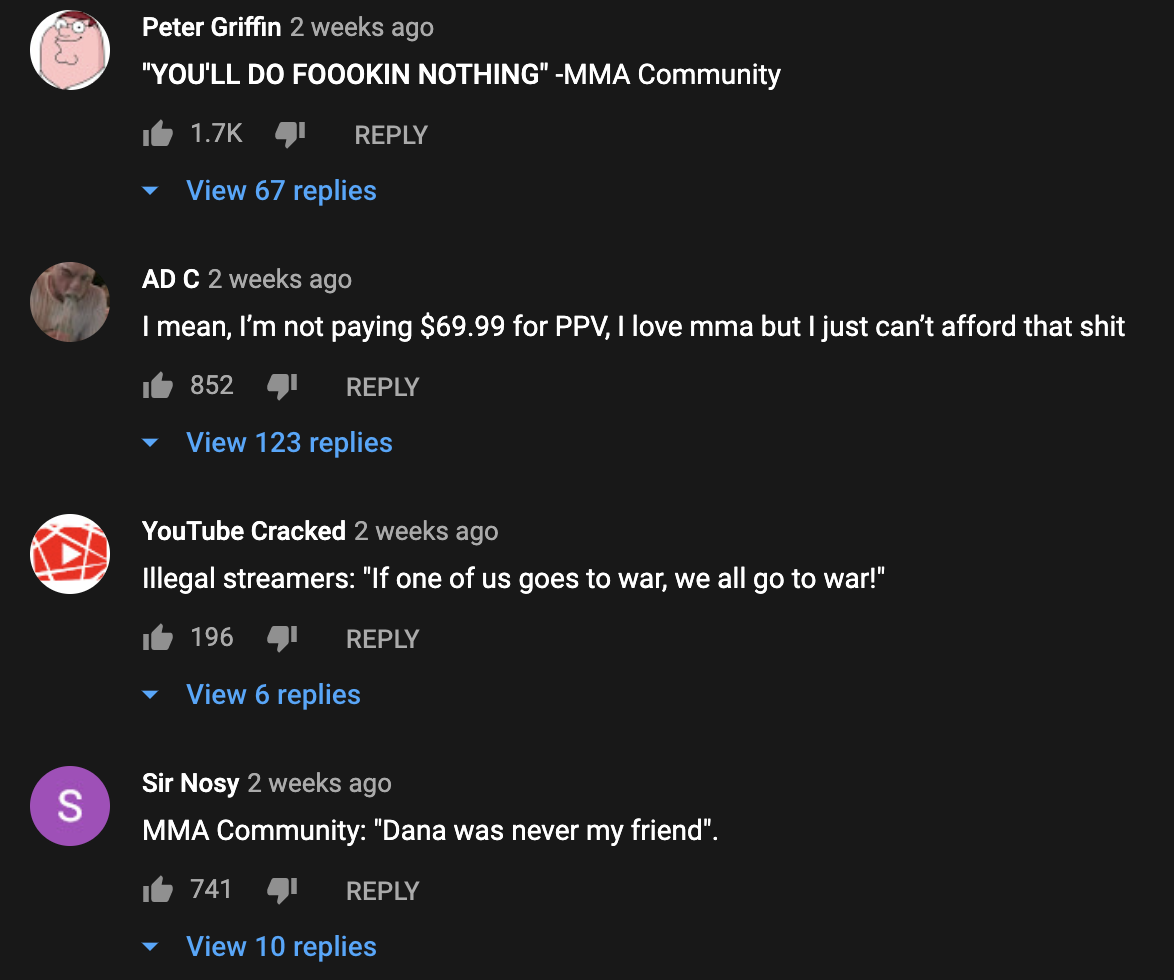 Can you blame them? White and Co. decided to raise prices in December, so UFC 257 this weekend costs a stunning $69.99, plus another $5.99 for a one-month subscription to ESPN+, thanks to their exclusive contract. For comparison, that’s the same price as 19 movies rented on YouTube. Or about the same as the new game Cyberpunk 2077, which retails for $60 and offers 30-plus hours of entertainment minimum.

When you factor in the massive unpredictability of a fighting event, in which heavily anticipated bouts can last seconds and get clipped to the internet in their entirety within minutes, it’s hard to trust that the $70 will be money well spent, especially if you’re feeling broke amid the economic crash. Meanwhile, if you’re like me and you’ve paid to watch a dogshit event unfold on your TV (legally), it’s basically impossible to have faith that the UFC has put together a card worth the time, let alone the dollars. There are way more pay-per-view UFC fights than there used to be in the “ESPN era,” and fans have noticed the reduction in quality.

So White’s war cry against illegal streamers will surely ring hollow, once again. In true ironic fashion, the man himself seems to see how futile his posturing is. “They’re never all going to go away. They’re going to be out there, and we’re not trying to get rid of all of them. I just want to catch a few. That’s all I’m looking for. You can’t shut the whole thing down, that piracy industry is going to go on forever. Let me catch a few and watch what happens,” he’s admitted.

We already know what happens: Hardly anything at all. Odds are, when Saturday evening rolls around, millions around the world will know exactly where to go to watch a crisp stream for free — just like they have before, and just like they will in the future.