Why All Men Hang Bath Towels on Their Boners

This counts as exercise, right?

The MEL motto is: “There’s no playbook for how to be a guy.” Still, there are unspoken rules.

When guys reach puberty, for example, they are obliged to jump and touch the top of any doorframe they pass through, as an assertion of both Darwinian fitness and mastery over their surroundings. Later on in life, if he’s graduated from college, a guy will be compelled to get drunk and revisit his old apartment near campus. Some guy impulses are better than others: committing to a funny ass tattoo is preferable to lustily DMing women right after natural disasters. (As for sending each other pictures of their poop, well, we won’t judge.)

But the best guy traditions, I would submit, seem to exist for their own sake, and unite the gender in a gloriously silly diversion. They are near-universal experiences that arise from some mystifying blend of neural chemistry, social conditioning and plain idleness. Such are the origins of a feat that everyone with a penis has accomplished: hanging a bath towel on your erection.

As a male habit, the so-called “towel rack” demonstration is fascinating for being widespread yet largely private. It’s something most men will do by themselves (or, perhaps, for the amusement of a close sexual partner), so it’s not as if straight guys are directly learning it from one another. Yet every dude is fated to arrive at the realization that their boner can support a modest amount of weight, and the towel provides a convenient experimental object: It’s soft, it can be draped over the hard-on, and you’re already naked when you reach for it after a shower. Having proven that a stiff member will hold a towel aloft, you immediately understand that this is a milestone you have in common with every other guy. It is an inevitable curiosity that must be satisfied.

Why this incredible, almost spontaneous convergence of behavior?

A few factors are at play. To begin with, although erections can be frequent and unpredictable, opportunities to employ them as nature intended are finite. Even the serial masturbator is constrained by the number of hours in a day. To hang a towel on your boner, then, is to keep it from going to waste. Furthermore, it’s a pleasurable sensation in mind and body alike. Here is proof of virile good health, while the slight pull of gravity against your tumescence is physically satisfying, an unexpected form of further arousal. The erection that would otherwise quickly fade will rise to the occasion, so to speak, in order to sustain the feeling, and fun, of walking around with a towel as adornment.

The practical applications of the “towel rack” are minimal, but no matter. It is the sense of utility and accomplishment that guys are after. Condemned to walk the earth with a fragile, fleshy hose between our legs, we yearn to give it some purpose besides urination and orgasm, and this towel thing is just about the best option we’ve come up with. Maybe we’ll figure out a cool trick to do with our balls in the future, but don’t hold your breath. At this point, we’re focused on discovering what other household items can comfortably rest on a rigid shaft. A T-shirt? Some pairs of underwear? Done and done. We unfailingly, however, return to the comfort of the towel.

It’s also unfortunately typical for dudes to take an innocuous delight to troubling extremes. Consider the redditor who investigated how many full-size bath towels he could bear on his boner: “Guys it was 4 and my dick almost snapped so I would not recommend, I’m average at 6 inches too so it’s not like I have a huge one either,” he wrote. Worse, there persists an unfounded myth that you can enlarge your manhood by turning the towel bit into a workout. The home design website Hunker for some reason has a guide on this: “Flex the pelvic muscles to cause the penis to lift against the weight of the towel. Perform 10 repetitions of this in three to five separate sets with a 30-second break between sets.” Though men do benefit from Kegel exercise, it’s not going to add inches to your hog, so probably best to enjoy the towel rack on its own terms. Not everything has to be a challenge or part of a self-improvement program.

Indeed, it’s my belief that this quirk of dudehood should remain a form of entertainment, and nothing more. It’s an odd, small miracle in itself — and a great, encompassing bond — that cannot be used for material gain. Dropping a towel on your horizontal dong is therefore a totally wholesome pursuit. Attempts to win glory this way, or corrupt the act with promises of enhanced erections, will bring only disappointment and ruin. If you insist, at least bone up on the physics. 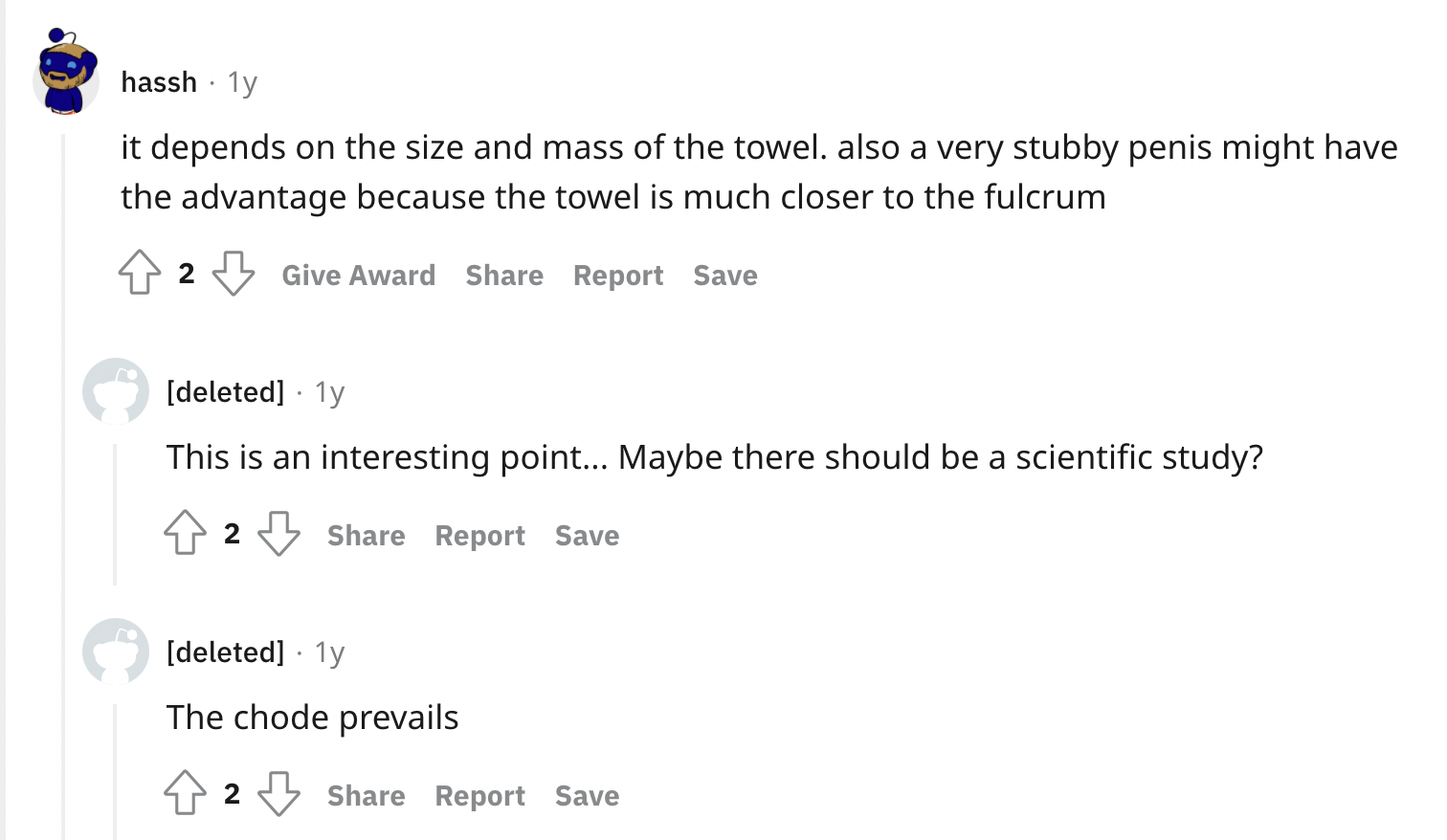 I’ll say it again: Appreciate what biology has given us instead of trying to push the envelope. The basic towel trick may be yesterday’s news to us dick-havers, but there’s always someone else out there just waiting to be impressed. Who knows? You might change their entire world.