Why Do Guys Always Have to Touch the Top of the Doorframe?

George Mallory, the mountaineer who died attempting to summit Everest in 1924, is said to have given a three-word reply when asked why he wanted to climb the peak: “Because it’s there.”

Is this the same reason that certain people — they tend to be male, young and on the taller side, though there are exceptions — always touch the top of a doorframe as they walk through it? Very possibly.

But that doesn’t dispel the essential mystery, does it?

We can say with some confidence, however, that top-of-the-doorframe-touching is a behavior learned in adolescence, when bodies are still growing. The Onion memorably referenced this near-universal phenomenon with a news-in-brief article titled “Area Boy Enters Jumping-and-Touching-Tops-of-Doorways Phase.” Crucially, this timing ensures that the ability to touch the top of the doorframe is unevenly distributed: Some kids still can’t get there, while those who can are reliant on their vertical leap as well as natural reach. Even then, figuring out which doors have a top bar, or “head jamb,” within striking distance is a matter of some trial and error. It makes perfect sense, then, that middle-school boys would view any success in this regard as an athletic victory. It’s like discovering a superpower, or the ability to masturbate. 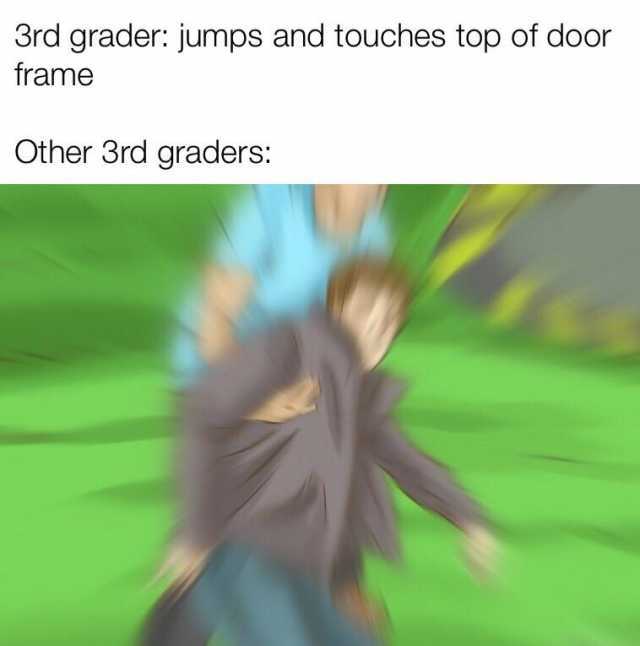 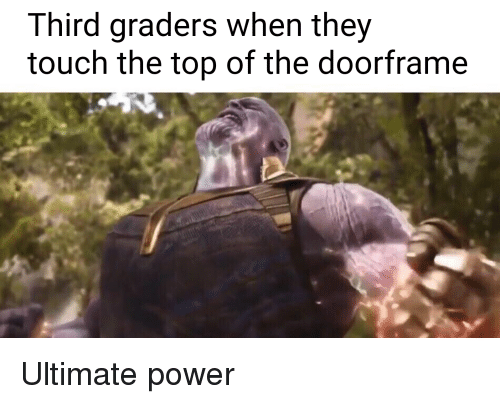 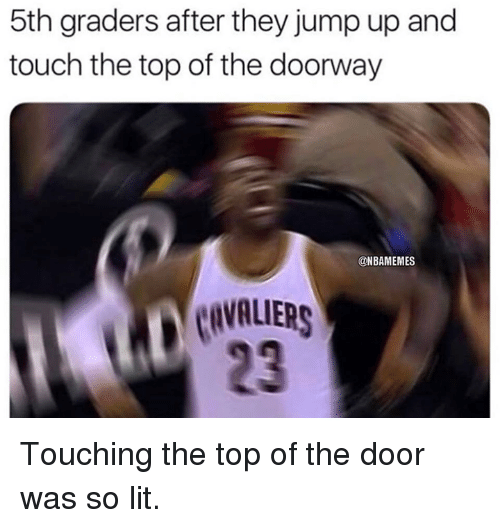 Whether or not the lads realize it, this must be a ritual display of dominance. It’s alpha shit. Maybe a cute girl noticed? Was she impressed? It’s not quite the same as posterizing some guy in a pickup basketball game — but that vibe is what they’re after.

After the Darwinian struggle of puberty, though, a good number of dudes continue to touch the tops of doorways. Perhaps this habit is a vestige of youthful competitive spirit, automatic behavior enforced by our so-called lizard brains. But even if it’s a simple reflex, it may serve a practical purpose. One theory suggests it’s a spatial awareness thing. Especially the tall guys, apt to hit their heads, will check a door’s dimensions. 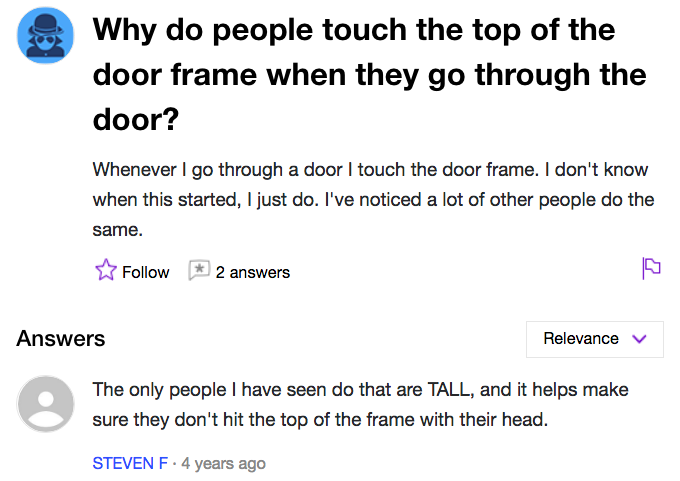 Regardless, it remains a performative gesture — an easy accomplishment or ego boost. And really, it’s not just doorframes. Dudes want to touch awnings, tree branches, ceilings, chandeliers, signs, high-up shelves, the tops of fences and walls… you name it, they’ll leap to touch it. They must. If an NBA scout happens to notice them, so much the better. Consider it training for a jump-touch Olympics that will never happen.

Which isn’t to say the personal satisfaction isn’t worthwhile. As one 6-foot-tall 18-year-old has written: “I don’t do it in the sense that I do it to show off but rather for me to relieve my urge of touching the top of the doorframe and proving (to myself) that I can touch it.” Whatever else has got you down, at least you have this to fall back on.

Yet we cannot leave well enough alone. Some men feel compelled to push the limits of the doorframe-top-touch tradition, making use of their extreme physique:

Or gymnastic skill, as demonstrated in this now-legendary Vine:

Or, in at least one alarming case, a high threshold for self-inflicted injury:

Truly, for all that guys claim touching the top of the door is an end in itself, it will never be enough. What are skyscrapers if not a grand attempt to touch the clouds? What was NASA’s Apollo project if not a team effort to touch the moon — and, moreover, touch it first? One might say that we, as a species, are defined by all that is within our grasp.

So keep on reaching upward, boys. The only thing you have to fear is a dislocated shoulder.