Why the MAGA Guys Will Always Come Back to Birtherism

All the right really has is racism. Whether this ideology manifests as being “tough on crime,” the disenfranchisement of black and Latinx citizens, a Muslim travel ban or the abject failure to aid in Puerto Rico’s recovery after a devastating hurricane, there’s just one strain of fearful hate that feeds the machine.

It’s why most of us can see the MAGA-hatted boys who mocked a Native American for what they really are. It’s why we’re familiar with Nazis’ newer anti-Semitic codes. It’s why a policy as cruel as family separation was ever possible, and it’s why we’ve endured the longest government shutdown in U.S. history over a symbolic wall that will never be built, which the president has tried to justify with ghoulish tales of carnage perpetrated by nonwhites.

The die-hard Trump supporters have also exhibited a misogynist streak (to defend him and assorted Brett Kavanaughs against sexual assault accusations), broad hostility to the LGBTQ community and a paranoia about their right to wield semi-automatic rifles or spew their bile in public without consequence. But make no mistake: It was racism — individual and systemic — that got Trump elected. And now, some eight years after his repetitions of the Obama birther conspiracy made this Fox News grandpa a political figure in the first place, we are heading back to the source of the nightmare.

Back to the Birther Playbook

As Democrats armor up for 2020, the right will try to sow doubt regarding the contenders’ origins. First they attacked Sen. Elizabeth Warren for claiming Native American ancestry, which led her to (unwisely) release DNA test results. This week, with Sen. Kamala Harris announcing her run, they are going straight to the birther playbook:

It’s not like they weren’t ready, either. The canard that Harris is ineligible for the presidency dates back at least to August 2018, when a guy named Charles J. Kerchner Jr. — whose 2009 lawsuit to unseat President Obama, based on similarly racist nonsense, was dismissed — published a very professional-looking PDF on his website: 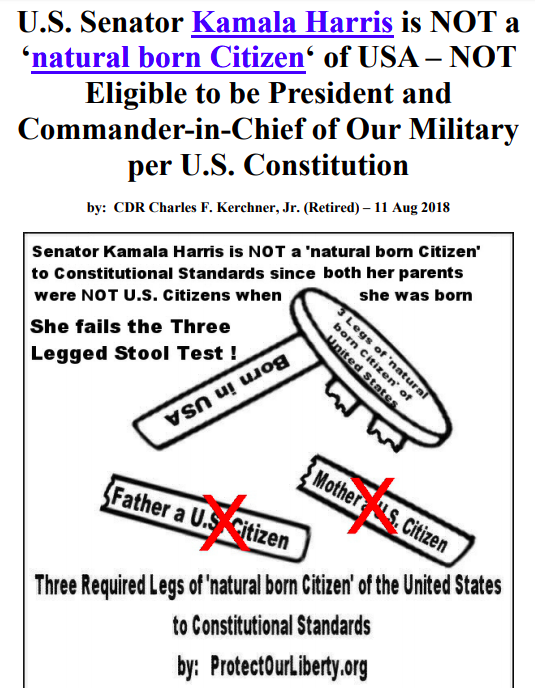 This document, as Media Matters reported, led to a concurring blog post from fellow birther Sharon Rondeau, one that 4chan, the QAnon conspiracy cult and the r/The_Donald subreddit picked up. In fact, some groundwork for this counter-reality programming was laid as early as the summer of 2017. Yet Rondeau and Kerchner are fringe weirdos, and these online groups circle any number of widely debunked theories that never break through to the mainstream.

Almost certainly, the turning point for this messaging came when a multiply disgraced 21-year-old blogger named Jacob Wohl tweeted it the day after Harris declared her candidacy. Within minutes, conservatives were pasting his exact words — a succinct summary of Kerchner’s claims — on Facebook, where they are bound to proliferate among Constitution-illiterate dolts who subsist on little besides fake news. The Root aptly termed it a “reboot” of the endless Obama birther hoax, and that describes the appeal: It is, most importantly, familiar. 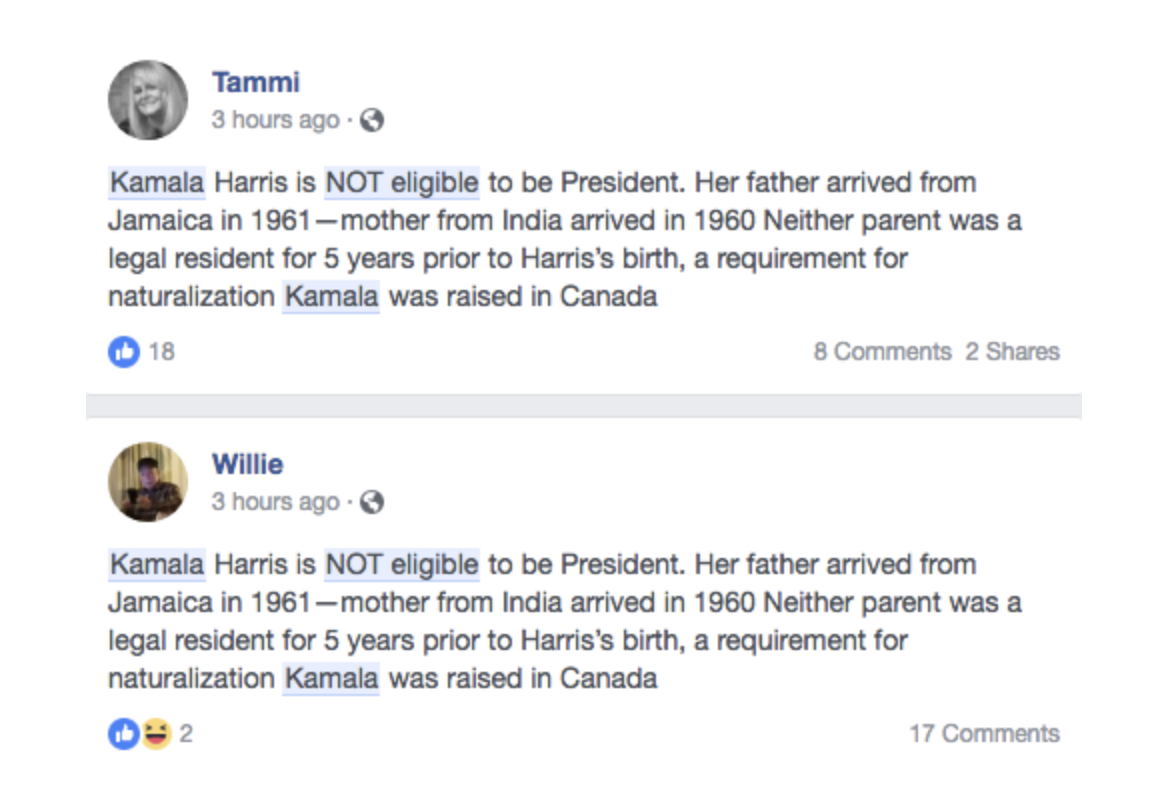 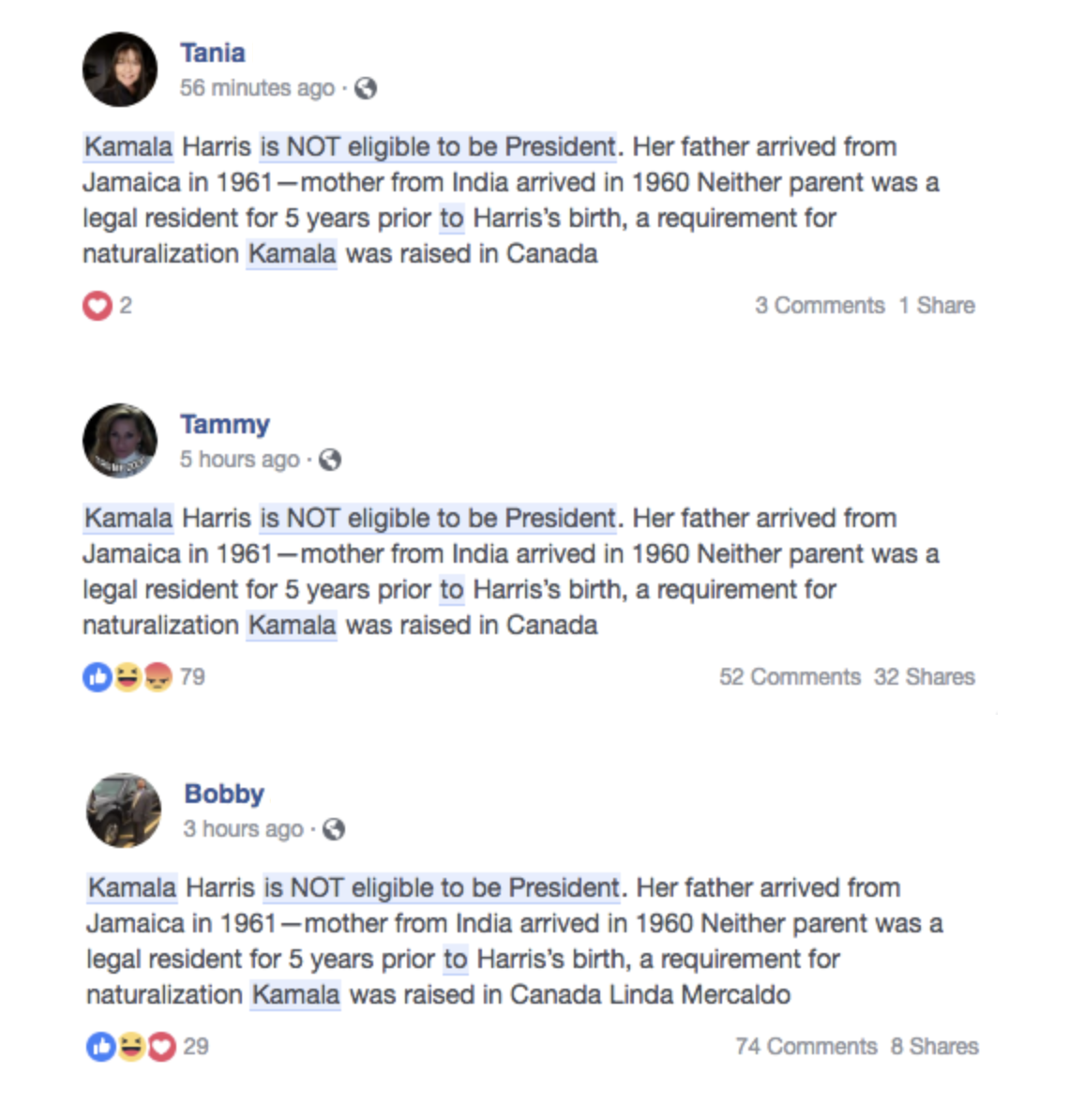 The ‘Reply Guy’ Peering Into the White House

Wohl is the perfect mouthpiece to carry this crap from the troll bubble into the mainstream, since his only interest is visibility. He has slowly but steadily transformed over the course of the Trump administration in order to stay relevant. At the start, it was naked thirst: Wohl would reply with lightning speed (and significant volume) to literally anything the president tweeted, vigorously agreeing with or adding to Trump’s comments, racking up impressions from other loyalists. When I interviewed him about this practice in 2017, he said he wanted to “spread the truth.” In time, he was retweeted by Trump himself and billed as a White House market whisperer despite being barred for life from futures trading for defrauding investors. As he built his own audience, he attempted to segue into a sort of espionage role, routinely tweeting that he’d heard liberals whispering their love for Trump in unidentified “hipster coffee shops.”

This phase saw its zenith in a disastrous press conference where Wohl and lobbyist Jack Burkman hoped to substantiate supposed accusations of sexual assault against Special Counsel Robert Mueller. The story fell apart in hilarious fashion, becoming the prime example of young conservatives’ “over-grifting.” A supposed intelligence firm was revealed to be a façade set up by Wohl alone, using his mother’s phone number, no less; even the far-right, rarely factual website Gateway Pundit bailed on the Mueller smear and “suspended” their relationship with Wohl, an occasional contributor.

All of which is to say, Wohl has long struggled to brand himself as anything more than a yappy Trump cheerleader. He was a laughingstock of the financial world almost before he set foot in it, and his amateurish effort to take down a former FBI director as a private investigator brought increased ridicule. He is cut off from the one publication that offered him the thinnest veneer of credibility as a pundit, stuck retweeting himself into oblivion.

Naked racism, of course, will prove much easier, suitable to his meager talents.

You don’t have to be canny or careful to push the birther junk, as nobody susceptible to it actually wants proof, and there is no authority to punish you for it. There is no grand scheme to expose, as it’s patently untrue, a simple lie. Anyone who seeks to challenge this incendiary nativist propaganda is obliged to explain far less juicy legal precepts.

Or, worse, count on a centrist media giant to find “both sides” in the “debate”:

All the Right Really Has Is Racism

Wohl has always beaten the drum on building the wall and the usual anti-immigrant rhetoric, same as any Trump suck-up, but race-baiting isn’t his thing, per se. If this Harris falsehood gains enough traction, that’s likely to change — remember, what he wants is attention — and I predict he’ll shift from Machiavellian failson to self-styled citizenship expert.

Again, all the right has is racism, and Trump’s hope for reelection rests on the energizing of a resentful, xenophobic white base. Wohl talking up the markets and employment rates as wins for “Trumponomics,” or going directly after the Washington players who threaten the president’s standing, will never have the effect he wants — and, as we’ve seen, it usually backfires. Birtherism is a safe route forward, a preexisting condition of the angry ruling minority, key to their continued fragile power.

It was inevitable they’d come full circle to this, a mutant form of identity politics that says their opponents have no identity, or not the kind that counts, anyway. The commentators on this side can’t argue for conservative policies or platforms on the merits, not just because these ideas plainly suck, but because that part of the electorate doesn’t give a shit. No, what they want is a return to their favorite game: deciding who is or isn’t a real American. And though there are plenty of metrics by which one may fail that assessment, skin color is at the top of the list. When nothing else is going as planned, count on bone-deep bigotry. You look a lot more viable when no one else is legitimate.