‘Most people talk about their parents’ love coming through an old lasagna recipe or something. For me, it’s a Hungry Man Chicken Fried Steak TV dinner’

Josh Scherer is senior food producer for Rhett & Link and their company Mythical, as well as a food writer and journalist who has been featured in Los Angeles magazine, First We Feast and Maxim. He’s the author of the cookbook The Culinary Bro-Down and is now hosting his own show, Food Fears. He’s the third in a special Father’s Day series of men talking about a dish that brings as many memories of Dad as it does flavor.

My dad was born in 1946. He was very much a Boomer victory baby. And I think that framed a lot of his outlook on life, especially as it related to food. He and my mom got divorced when I was four years old. Before that, he had a career in airport cargo management and had that Reagan-era yuppie, “I’m a manager of big industry”-type attitude of seeing the pinnacle of food as steak with steamed lobster tail. But after the divorce, he lost his job. And when my mom moved us from Kansas City, Missouri, out to California, my dad followed to be close to me and my older brother. He struggled, however, to find any work whatsoever. I think all his savings got completely tanked during the divorce, plus lawyer fees and all that stuff.

So we were in California, but I was living with my mom and she didn’t really have a job either. We were eating off of food stamps and going to food banks all the time. I will say, living in Orange County being poor can be fantastic because all the rich people are so eager to help — I once got a whole pizza from Pizza Hut and a bag of candy from the food bank, seriously (laughs). Still, I didn’t really understand a lot of this struggle. All I understood, really, was that food made us different. You’d show up to school lunch and all the kids would have Milano cookies and Capri Suns, and I’d have a four-for-a-dollar Carl Buddig lunchmeat sandwich and water from the drinking fountain. From an early age then, I’ve been obsessed with the idea of brands, which separated the haves and have-nots at school.

My brother and I moved in with my dad when I was 10 years old. He had started to climb back into a career, eventually becoming a special education teacher at Jefferson High School in South L.A. We were still super poor, living in a one-bedroom apartment with three people. But he started to have some money, even if he was driving four and a half hours a day in traffic to get to and from work. Which is why my brother and I were always left at home with a fully stocked freezer of microwave dinners. Budget Gourmet dinners were the number one brand, but it was mostly whatever was on sale. Hot Pockets would occasionally be two for three at the supermarket. Budget Gourmet would be three for a dollar. Michelina’s were super cheap, too. Banquet, of course, was a staple as well. Literally every night was a different option: Do we want to go with baked ziti from Budget Gourmet, or do we want to go boneless rib meal from Banquet?

In retrospect, it’s really funny. But as a kid, I never thought, Man, things are pretty fucked up if this is how we’re eating. It was always like, Wow, what a variety I have in front of me, especially compared to how we were a couple of years before, when I didn’t know when the next meal was coming. Then there were the gourmet options of frozen meals, which were such a fantastic treat. This was what we had right after my dad got paid, and we went to one of those check-cash-advance places. I had an absolute obsession with Hungry Man brand because it was the biggest. Eating that chicken-fried steak dinner was like the first time I had a Big Mac instead of a Dollar Menu double cheeseburger. I thought, So this is how the other half lives. So big and bountifully.

Now it’s become a kind of weird tradition. When I’m feeling especially sentimental, I will go get a Hungry Man TV dinner and make it exactly according to the package and eat it. Doing so reminds me of a place that I still have a lot of positive emotions about — and, of course, some negative ones as well. I know my dad did feel a fair amount of shame. He was literally homeless at one time, and that low point reframed things in his mind. I saw the sense of pride he had in providing more for me, especially any sort of food. And I’ve framed food in such an important way in my own life because of that. Most people talk about their parents’ love coming through an old lasagna recipe or something. For me, it’s a Hungry Man Chicken Fried Steak TV dinner.

I started cooking for him, too. I was such a latchkey kid. I started watching Food Network when I was 11, and I’d sit and watch Rachel Ray constantly. And so, I took to experimenting with cooking. Here, for example, is my breakfast every day in seventh grade: I’d take a ham-and-cheese Hot Pocket and microwave it. I’d then scramble eggs with garlic powder, and shove it inside the ham-and-cheese Hot Pocket, making a breakfast sandwich in the process. My dad saw me getting interested in food, and he basically said that my chore could be making dinner for us every night, if I wanted.

Over time, I got more inventive. I remember the first time I fried catfish, because my dad would give me money and I’d go to the store to buy groceries. Catfish was on sale for like $2.49 a pound, so here I was, a 12-year-old trying to buy catfish. I asked, “Do you know how to cook this?” The guy scratched his head and said, “Well, go buy some breadcrumbs and put some butter in the pan and breadcrumb the fish and fry that and eat it.” I did it, and it was a revelatory moment for my dad. He thought, Holy shit, you can just do this?

It got to a point where I had a signature dish that I made when I was probably 13. I called it a scallop risotto in spiced crepes. Trader Joe’s had this bag of sea scallops for $3.99. I’d boil Uncle Ben’s rice, and I’d mix the scallops in with that. So imagine rice with mushrooms and scallops, plus a bunch of goat cheese. That was the risotto component; I’d just been watching Food Network shows, and someone had this creamy rice thing, and they called it risotto, so I decided, “That’s probably what this is.”

Next, I’d make Bisquick batter, and I’d put a fuckton of Frank’s RedHot sauce and make a thin crepe consistency. I cooked that and rolled the risotto into it. I have a strong taste memory of this dish, and it’s terrible. But my dad was so proud of it that he had me make a big batch of it to take to a work potluck at his high school. He showed it off! Look at what my kid did! Maybe some other adults were impressed, but anyone who understood food that makes sense would’ve thought, What the fuck is this garbage? Still, it was the first big dish that I saw elicit outward pride from him. As a result, it made me feel very capable in cooking and trying something new.

Unfortunately, my dad passed away in 2011, in the summer between my freshman and sophomore years of college. I was a political science major. My brother studied finance or something boring because he always had to be the older, responsible one. But I was doing political science and didn’t know what I actually wanted to do. Before my dad passed away, he always encouraged me to do things that I was passionate about. But I would internalize so much of that as, “No, no, no, I have to be safe. I have to get a safe job. I don’t want to put my kids through what I went through.” Especially as I got older, though, my dad was adamant: “Fuck that. Chase your passion. Do what you love.” I think that was because he tried to go the safe route by getting the Reagan-yuppie job, and then ended up homeless and feeding his kids on Budget Gourmet and food stamps.

When he died, it really showed me that you just get one shot at this. That’s what got in my head of realizing that all I care about is food. I didn’t exactly know how to get there, but I was going to try. So I started a blog and stumbled my way into a weird professional food media career. I think he’d be incredibly proud of that. I not only have the career I do now, but I also took the leap in the first place.

Like I said, I think of him whenever I eat a Hungry Man dinner. There was, though, a special thing we’d do with the chicken-fried steak dinner. We’d have some Van de Camp’s hamburger buns around, and I’d make a loaded sandwich out of the entire Hungry Man dinner — corn, gravy, potatoes and all. Sometimes I’d throw in a slice of American cheese. I don’t even consider it a meal. I’ll eat a regular meal, and then later put down a Hungry Man dinner and get nostalgic. 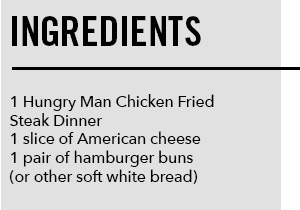 At 10:05 p.m. or another awkward time in between meals, microwave the Hungry Man per the instructions on the box. Layer the hot ingredients carefully on top of the bottom hamburger bun. Top with cheese and the final bun. Let cool slightly and eat.