Ranking Hot Sauces by How Healthy They Are

This is the most pedantic, and therefore most vital, thing I’ve ever done

I must admit, I’ve never considered that one hot sauce might be healthier than another. I always figure the small amounts I squirt onto my foods have an inconsequential nutritional value.

That said, every little bit counts (when you’re on the 100th or so edition of a ranking column, at least), so I asked Dana Hunnes, senior dietitian at the Ronald Reagan UCLA Medical Center, to help me rank some of the most popular hot sauces by how healthy they are — from kinda negligible to… well, also kinda negligible (shut up, your job’s pointless).

Turns out, most hot sauces are virtually the same. As Hunnes points out, the ingredients are almost always some combination of chili peppers, spices, vinegar and salt. In some cases, they also add preservatives and a small amount of sugar. Therefore, the only reasonable way to rank them is by how much salt and sugar they contain, as well as whether they have any potentially dangerous preservatives in them.

Of course, too much sodium has been linked to high blood pressure, as well as increased risk for heart disease and kidney disease, and too much sugar has been linked to diabetes and obesity. Even still, I want to emphasize that none of these hot sauces, especially when used in normal amounts, rather than chugging the entire bottle, contain enough salt or sugar to be concerned about. In fact, a normal serving of most hot sauces has virtually zero calories, so the impact really is trivial. That said, I’m going to rank them because it’s my job, and damn it, if I don’t, who will?

One other thing: I’m not going to be talking too much about the heat levels of these sauces, although I’m including a general idea of how hot each one is. If you want to see where they land on the Scoville Scale, which is a measurement of how hot chili peppers and other spicy foods are, you can check that out here and here. 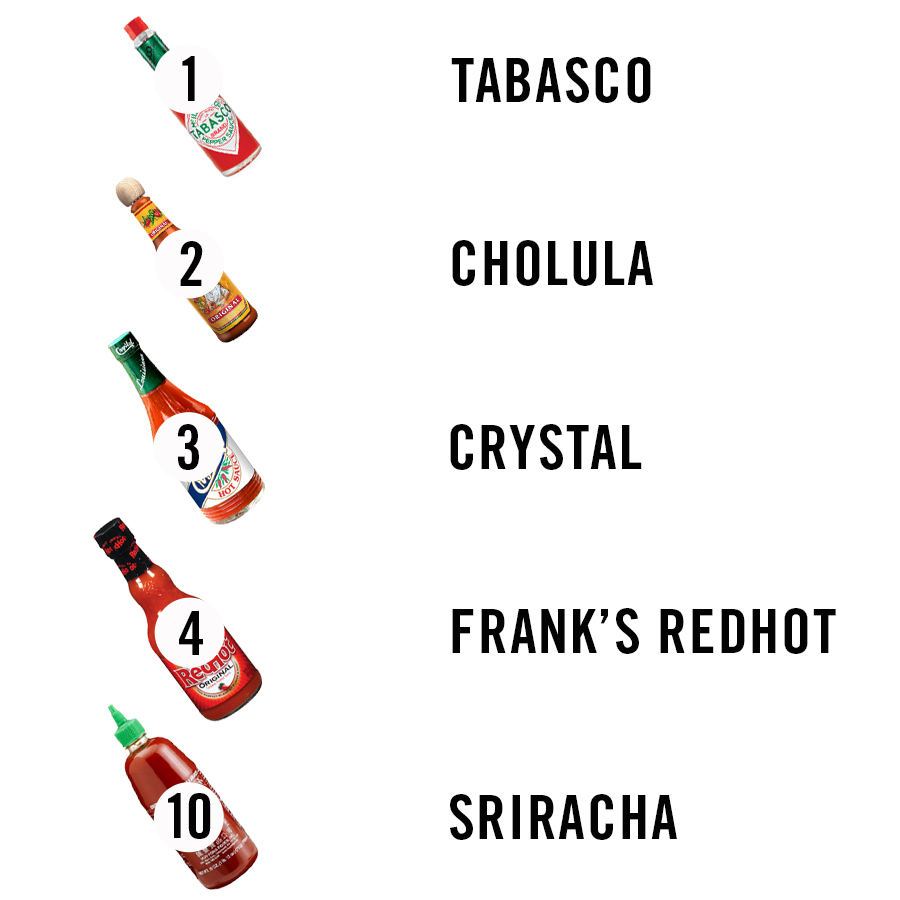 1) Tabasco (Not Hot at All): Tabasco earns first place on this ranking, since it contains no preservatives and one teaspoon has only 35 milligrams of sodium. For reference, the American Heart Association recommends consuming no more than 2,300 milligrams per day, but new studies suggest that may be slightly overblown. Either way, you can see how some Tabasco hardly even makes a dent in that recommendation.

2) Cholula (Kinda Hot): Cholula comes next simply because one teaspoon contains 110 milligrams of sodium. It also contains a little bit of xanthan gum, which has been shown to have a laxative effect. Frankly, though, there’s no way that the amount in this hot sauce would cause you any trouble, although the heat might.

3) Crystal (Little Hotter Than Cholula): This comes next, since one teaspoon contains 135 milligrams of sodium.

4) Frank’s RedHot (This is Actually Super Mild): Yep, more sodium — 190 milligrams in all.

5) Louisiana Hot Sauce (A Cat Could Handle This): Another incredibly basic hot sauce — the ingredients are limited to aged peppers, vinegar and salt. It contains 200 milligrams of sodium per teaspoon.

6) Valentina (Not Hot at All): The sodium levels drop here, at only 64 milligrams per teaspoon. However, it’s the first hot sauce on the list that contains a potentially problematic preservative: Sodium benzoate, which has been shown to exacerbate hyperactive behavior in young children.

7) Texas Pete (Pretty Mild): In terms of ingredients, this is basically the same as Valentina — it also has sodium benzoate in it — except it contains six more milligrams of sodium per teaspoon, which is why it lands here on our list.

8) Tapatío (A Bit Hot): Another sauce with sodium benzoate, Tapatío contains 110 milligrams of sodium per teaspoon.

9) Dirty Dick’s (Pretty Damn Hot): While this sauce only contains 55 milligrams of sodium per teaspoon, the same amount also has one gram of sugar, which really isn’t much, but again, we’re being super pedantic about this ranking.

10) Sriracha (Kinda Hot): Similar to Dirty Dick’s, Sriracha contains one gram of sugar per teaspoon, and the same amount contains 80 milligrams of sodium. Sriracha also contains potassium sorbate and another preservative called sodium bisulfite. While generally recognized as safe by the Food and Drug Administration, some people can develop a sensitivity to sulfite-based chemicals like sodium bisulfite, which can cause nausea, abdominal cramping, diarrhea, difficulty breathing and swelling, itching and reddening of the skin. So if you know sulfites don’t agree with you, watch out for Sriracha.

Now, again, I want to emphasize that, no matter where they land on this list, none of these hot sauces are inherently bad for you. “Because the portion typically isn’t all that much, there isn’t much to be concerned about healthwise,” Hunnes reiterates. So feel free to heat your food up without worry. That said, I can’t recommend slugging an entire bottle of Cholula with a beer bong. You’ve been warned.