I just don’t understand them. I’m the kind of person who needs to be doing something, always. I don’t like “sitting there” with my thoughts, because inevitably I end up counting the seconds and the minutes and time seems to slow to a crawl. This is what a bath is — nothing to do at all, merely laying in increasingly tepid water, slowly getting older, second after counted second a little bit closer to death.

Yet here I am, wickedly hungover on Friday, February 15th, in the bath. Not the kind with bubbles, where you gather the foam in your hands and then place it on your face and pretend that you’re some kind of Santa Claus (or whatever other dumb shit you did with all that foam when you were a kid). And not the kind you take at twilight with essential oils, and lit candles, and maybe Sade’s “No Ordinary Love” gently cooing from a nearby waterproof speaker that represents the second-best purchase you’ve ever made in your 34 years of life — second only to your beloved double-walled water bottle that keeps ice water chilled for up to 24 hours, ensuring you’ll stay hydrated well into the wee hours of the night (though, admittedly, a lot of good that did vis-á-vis my current hangover).

Nope, this is a plain old bath, in my extremely narrow tub that also is a shower, and in the full light of day. That is all to say, there’s nothing playful or relaxing about it. The only things that make this bath extra-ordinary is the extreme temperature the water’s been turned up to, a mug of tea resting precariously in the corner of the shower-tub near my foot, and, of course, the onions that I’ve placed in my armpits.

If all this sounds weird, that’s because it is. So here’s how I, being the kind of guy who’s always looking for a shortcut to fix what ails him, wound up in a tub with a four-alarm hangover and vegetables tucked beneath my arms.

The Problem: At nearly 35 years old, my hangovers can get pretty fucking bad — like morning to evening, bad.

The Alleged Cure-all: Okay, so you’re probably going to laugh at my thought process, but this entire scene with the hot water, the tea and the onions is all in service of me attempting to cure my hangover using the “artificial fever method,” a trick for getting over a common cold, which I suspect will make me feel a lot better, or more likely, do nothing at all.

The reason I think it could work is because, let’s face it, hangovers are a lot like a common cold, right? (And for any respectable adult, they probably suffer from them far more frequently.) Let’s take a look at the symptoms, starting with cold symptoms (courtesy of the Mayo Clinic):

And a hangover’s symptoms (also courtesy of the Mayo Clinic):

Okay, so not apples-to-apples, but there’s some overlap. Under hangover we’ve got fatigue, weakness, dizziness and shakiness, all of which I believe correspond to a cold’s  “generally feeling unwell (malaise).” Also, they both list headache and body aches as symptoms.

So again, I’m feeling like this could work. “Could,” again, being the operative word, because besides not aligning directly with its intended use, the artificial fever method also sounds like one of those cure-alls you found off of an Instagram Story from a New-Age health influencer who normally posts about the “masculine and the feminine,” “seed cycling,” “food intolerances” and the importance of eating sauerkraut — like I did. 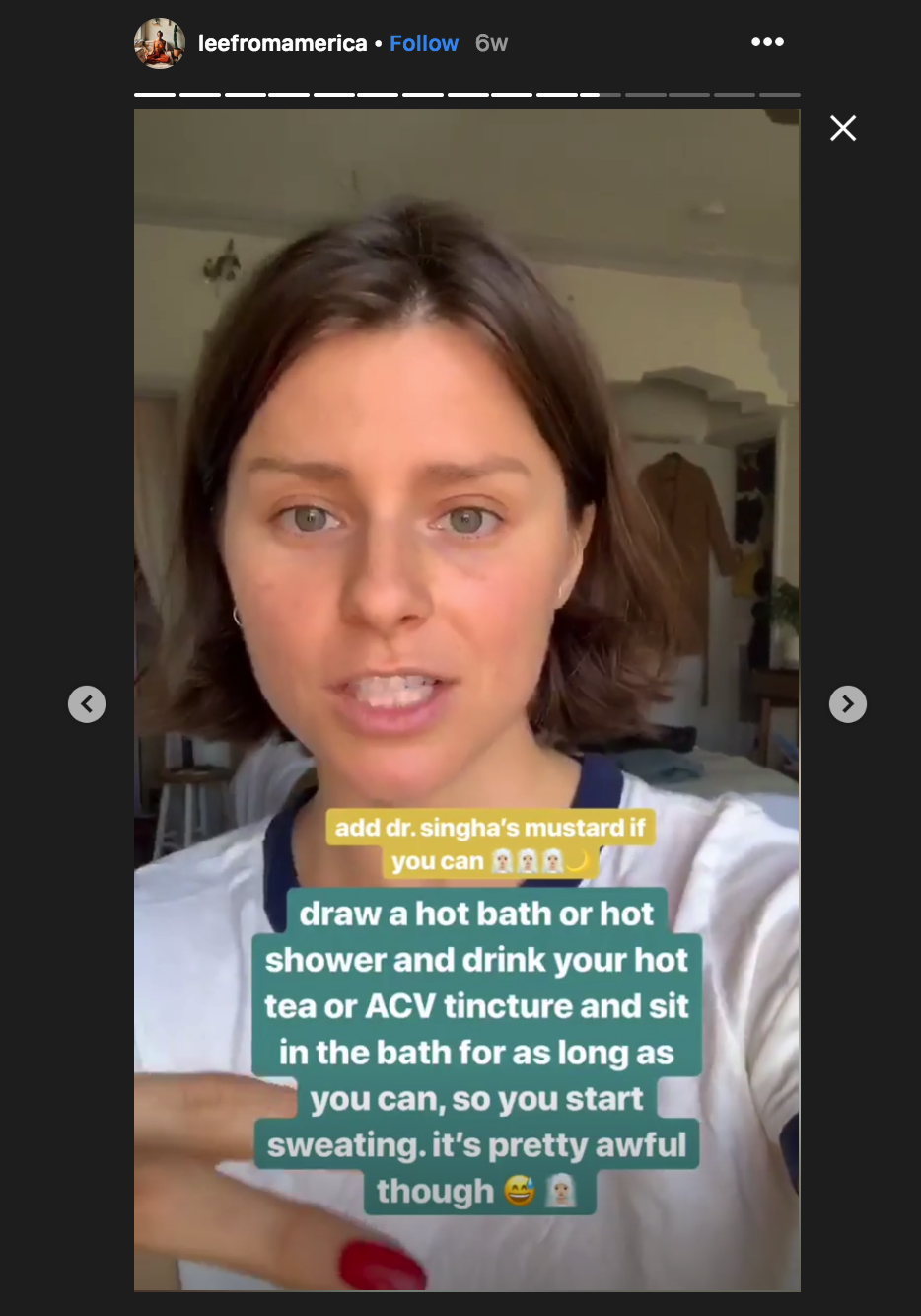 What the Science Says: Unfortunately, science — with its empirical method, rigorous testing and double-blind placebo-controlled trials — is likely not on my side. The mechanism this whole “artificial fever method” is supposed to take advantage of is the idea that a person can “sweat out” a cold/hangover by raising their body temperature and excreting the virus/residual alcohol/toxins through their pores.

Funny enough, MEL’s very own Ian Lecklitner has written about sweating out a hangover before, and when he asked Aaron White, senior scientific advisor at the National Institute of Alcohol Abuse and Alcoholism, about the possibility of sweating a hangover away, White had this to say: “The vast majority of alcohol — 95 to 98 percent — is metabolized by the liver. But the remaining two to five percent is excreted unchanged in sweat, urine, feces, breath, saliva and breast milk, so if there’s any alcohol still in our body when we wake up the next day, a little bit of it will be excreted via sweat.”

So far, so good. Only, that’s actually not so good, because right after that, Lecklitner correctly points out that “hangovers result from alcohol that has already been metabolized by the liver, and thus, can’t be sweated out.”

Now that we’ve established that there’s little-to-no scientific evidence to back up the hangover theory, what about just tricking my body into thinking it has a fever, and then hopefully feeling better and refreshed when I get back to normal?

That’s where the onion comes in.

Unfortunately, there’s even less scientific evidence of the onion trick being effective, save that I saw it on Quora and it sounded so stupid it might actually work. Basically, as “Pranav Pandey,” a software engineer from Pune, India, states in response to a question about the efficacy of onions causing a fever, onions have magical toxin-sucking properties: 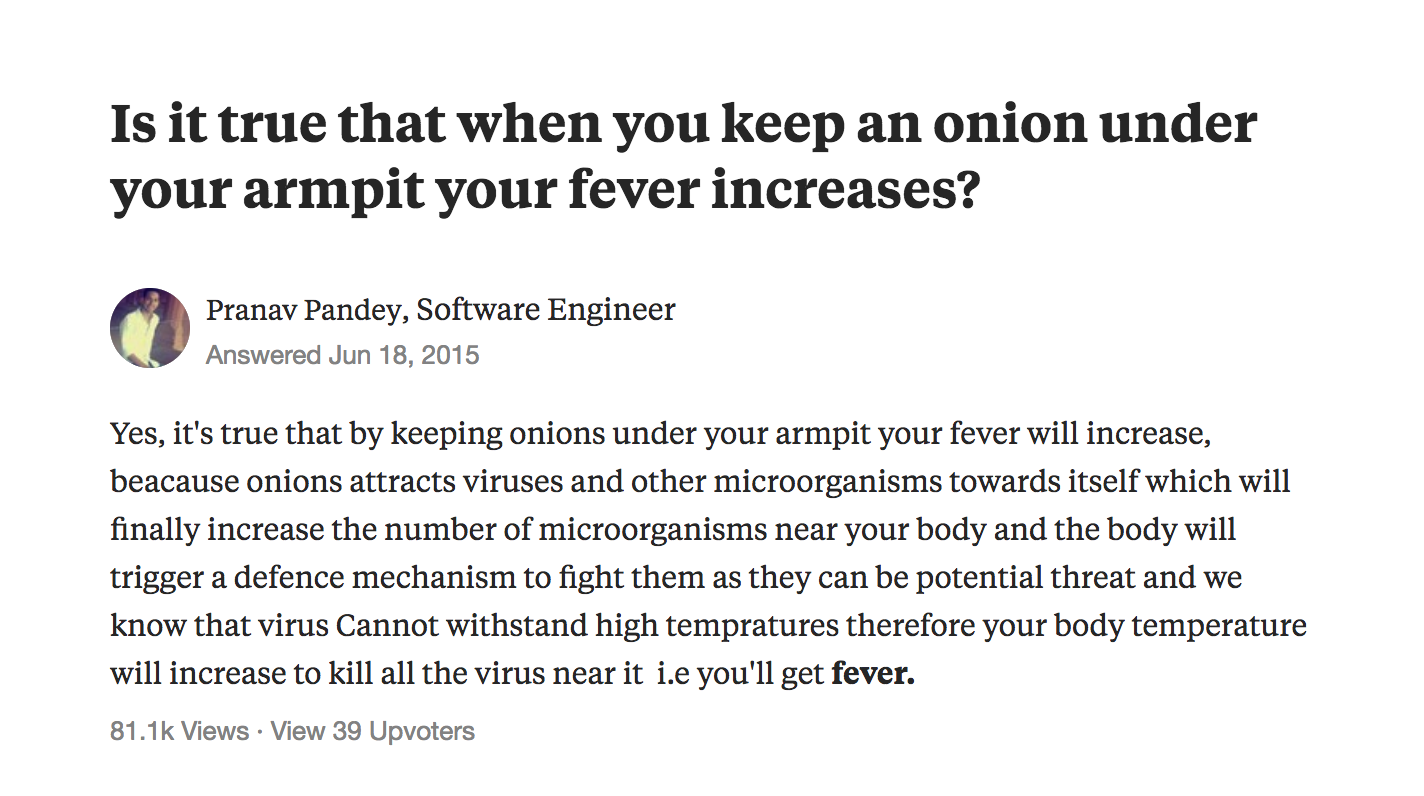 And, as “Richal Andy,” of Symbiosis Online Publishing states, armpits are, like, thin pieces of skin and shit, so that’s where onions can do their best work:

So, as you can see, we’ve established that this is all a bunch of bullshit, and I’m in this tub for no good reason at all, and life generally sucks. But I still think this is going to work, because these old-wives tales come from somewhere, and the placebo effect has to count for something, and if you will something hard enough it’ll happen.

My Experience: I’ve been in this bath now for two hours. I’ve refilled the water three times to keep it as hot as I can handle (I’ve got a seriously strong water heater, that shit comes out boiling), I’ve drank all my tea and the whole bathroom smells of boozy onions.

Honestly — no bullshit here — I think it’s working. I don’t feel as bad as I did two hours ago. Sure, I’m bored as shit just sitting here, pruned to all hell, wasting what would’ve been a rare day off from work and not doing what I normally do when I’m hungover, which is eat bad food and sleep through episode after episode of Bob’s Burgers. But I think I feel better than I would normally by this time. One thing that sucks is I am hot. Like red in the face hot. I’m not sure that means I’ve successfully raised my core temp to 104 degrees, but I surmise I’m at least up to 99 degrees.

I probably could have done without the tea, too. I’m not a huge tea fan, and each pull of the hot liquid feels like pouring gasoline on an open flame. Plus I’ve kicked the glass no less than two times, which meant getting out of the tub and microwaving more water because I don’t have a kettle, lowering my temp back to 98.6 degrees and decreasing the efficacy of this whole endeavor.

But now that I feel at least nominally better, I’ve had about as much of this bath shit as I can handle, and it’s time to get out.

My Takeaways: Is this something you should try the next time you’ve got a hangover? I don’t think so. For one, as I stated earlier, baths are annoying wastes of time. This bath was no different, and may have actually been worse than a typical bath thanks to the onions and the smell of booze. For another, sure, I felt better. But did I feel better than I would have in my jammies neck deep in a burrito and watching my stories on Netflix? Possibly slightly, but not enough to deal with the hassle of buying supplies, wasting all that water and sitting in a pool of my own filth. And finally, who knows if the positive effects I felt had anything to do with “giving myself a fever,” anyway? It might have just as easily been my liver working a double-shift to get that all the bad stuff out of me.

So, no, don’t try the artificial fever method. Stick to the cheats that actually work: Advil for your headache and body aches, your bad meal of choice to soak up that residual booze and above all else, time to allow the bad juju to fade away.