In the summer of 2007, Sam, a 20-year-old college student in Florida, felt the hand of a police officer pressed against the back of his head. “I wasn’t driving, but we were in an area that had some break-ins, so the police pulled the car over to search it,” he tells me. “Next thing I knew, the officer slammed my head into the cruiser — giving me a concussion — then booked me into the city jail.”

Unbeknownst to Sam, another person in the car had hidden a bag of weed under his seat. “I had no prior criminal record and was 100 percent sober for the previous two years including that night,” Sam says. “So I lawyered up and got the charges dismissed on lack of probable cause and violation of chain of custody.”

Given the wrongful arrest, Sam tells me that the judge in his case explicitly said the charges against him and any court files would be sealed from the public. “I thought that was the end of it,” he explains. “But one day, I searched my name on Google and the mugshot from that arrest was the first result.” A wave of nausea hit him as his stomach dropped. “I was simultaneously flabbergasted and irate,” he says.

Throughout the early aughts, mugshot-publishing websites operated with impunity, scraping local police department websites for public arrest records and publishing those photos on their own sites, no matter if the arrestees were ultimately convicted or not. Sam was an early victim of this then-thriving industry, which grew brazen enough to categorize arrestees under tags like “Hotties,” “Hunks,” “Scary” and “Celebrities,” and even branch into college campus-specific databases.

For Sam, and thousands of others who wanted their arrest photos removed from the internet, these websites were willing to oblige — for a fee. “Below my name and mugshot was a PayPal portal to remove pages,” Sam says. “I was enraged; this was hands-down extortion. Forget people like me whose charges were dropped, people who commit actual crimes and serve their time shouldn’t have their mistakes publicized until the end of time, let alone have to pay some asshole in Florida to avoid that.”

Sam refused to pay, but months of contacting the website’s administrators, hoping to explain that his charges were dropped, proved futile. And at the time, there were no laws preventing the website from publishing his information, so he had no legal recourse either.

In 2011, Belle, a 34-year-old in New York, had a similar experience. “I didn’t learn about it until later, but the man I lived with at the time was drugging me,” she says. “One afternoon I was so out of it that I swerved into a ditch and crashed my car.” Belle was arrested and ultimately pleaded guilty to a DUI charge. Long after completing all the follow-up court dates, community service and fines, her mugshot remained plastered all over the internet.

“It was on around six or seven different websites,” she says. “Some of those sites have gone down since, but at the time, each wanted a fee for removing it.” Belle didn’t have the funds to pay the fee, but even if she did, she’d heard numerous reports of others like her paying to get their pictures removed from one site, only for it to pop up on 10 others, all with their own fees. “I’ve never felt more powerless and afraid,” she tells me. “I just assumed that every job I applied to Googled my name, found the picture and noped out.”

Since 2013, 18 states have passed legislation attempting to regulate exactly what information mugshot websites are allowed to post and where they’re allowed to post it. But according to research by Pew Charitable Trusts, the websites almost always find ways to work around these new laws, or simply ignore them.

One of the largest databases is mugshots.com, which boasts entries for roughly 30 million people. As Pew points out, many of these people reside in states that have passed laws attempting to restrain mugshot websites. “Georgia twice tried to get mugshots off websites,” Pew reports. “Still, Mugshots.com claims to have 2.3 million records from Georgia on its site, including entries for those arrested after the law took effect.”

To be sure, the laws surrounding publicly shared mugshots aren’t as cut-and-dry as they may seem. Setting aside the First Amendment claims that many of the mugshot websites hide behind, there are worthwhile concerns around access to public records. As one California state senator told Pew, prohibiting public records altogether would lead the country closer to “sounding like a totalitarian state where people are secretly arrested and no one knows about it. No one can react to it or take action.”

But advocates for criminal justice reform point to mounting evidence that the conventional approach to making mugshots public plays an outsized role in perpetuating racial stereotypes. Given that people of color are arrested at a higher rate, the insistence that mugshots be made public upon booking, rather than upon conviction, amplifies the biased association between them and crime and undermines the presumption of innocence.

With that in mind, local governments in Utah, Illinois and Florida have proposed laws that would limit the publication of mugshots to after conviction, or in the case of San Francisco, only if the arrestee “poses a threat to the public.”

Many states have also moved to crack down on mugshot websites that operate “depublishing” schemes, or demand a fee from people who want their photo taken down. To get an idea of just how lucrative the operation is, look at the arrest warrant for the purveyors of mugshots.com, who were arrested in 2018 and extradited to California on charges of extortion, money laundering and identity theft. According to court documents, the California Attorney General’s Office alleged that in a three-year period, the website made over $2 million in removal fees from 5,703 individuals. The American Bar Association labeled their arrest one of the 10 “most important legal tech stories” of 2018, and a “new step against online extortion schemes.”

Back in 2008, however, Sam didn’t have the law on his side. He was about to enter the workforce, and he needed the mugshot taken down ASAP. “I could argue all I wanted that it was a false arrest,” he says, “but any employer searching my name, if they didn’t immediately pass upon seeing the mugshot, they’d psychologically have that in the back of their head.”

And so, Sam took matters into his own hands. “I sent the company a boilerplate cease-and-desist order under a fake law firm email address,” he tells me. Not only that, but he fell back on some search engine optimization tricks he’d learned as a marketing major, just to be safe. “I spun up a spam website, then linked from there to the mugshot page at least 1,000 times,” he explains. “I was hoping it would tell Google the page was also spam and de-index it, or at least drop it from the first page.”

“I had to fight fire with fire,” he continues. “Pardon my French, but fuck them. I’d happily crash their entire website, doxx the owners and make them miserable.” Luckily, his tactics worked: “The page was removed within seven days. It was sweet revenge.”

Belle, on the other hand, is still haunted by her mugshot, which remains a top result on Google. “The person in the picture isn’t me, and seeing it makes me feel sick to my stomach,” she says. “All these years later the thought that that could be so many people’s first impression of me keeps me up at night.”

“I know life is far from fair,” she concludes. “I was stupid and ashamed that I had driven the car, and I’m guilty of the arrest. But to this day, I have awful anxiety that someone will search my name and associate me with that picture, and with the worst moment of my life.” 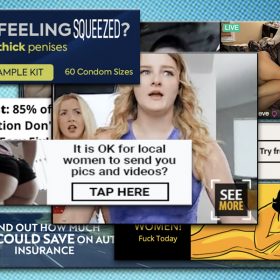