This Is How Adult Producers Make It Big on OnlyFans

It would be near impossible to follow only one OnlyFans creator. If you follow one, you almost certainly follow others by proximity. You see the nudes they retweet. You see the subreddits they converge in. You see the collaborative photo shoots they share.

OnlyFans is, by nature, a collaborative business. And if you want to succeed, you need to band together. “OnlyFans creators often work together via cross-advertising,” OnlyFans producers Lily Kawaii and Sansa Starkers write to me in a collaborative message on Reddit. “This strategy helps to share audiences between creators and is mutually beneficial. This makes networking with others in the industry an intrinsic part of being a successful creator.”

As moderators of r/OnlyFansAdvice, Kawaii and Starkers are constantly relaying tips and tricks to OnlyFans newcomers. “Lily also promotes her creator friends for free on her popular Twitter page @TittiesnKittys,” they add. “OnlyFans creators and sex workers in general are often vilified by the outside world, so we’re compassionate to each other’s struggles. Genuine friendships are often formed in the industry due to a mutual respect and affinity we all share from being judged by others.”

As a result of this mutual respect, communities similar to r/OnlyFansAdvice abound on platforms like Reddit. “There are a lot of subreddits that are supportive of creators,” says Phoebe, an OnlyFans creator and moderator of r/OnlyFans101. Some allow active advertising, some stick to discussing tips and some are all about appreciating the many asses of OnlyFans.

The collaborations continue far outside of the Reddit community, too. “The support system I partake in operates through private Telegram channels and DM groups on Twitter,” says Mistress Eva, a creator on AVN Stars, a platform similar to OnlyFans. “We share strategies on what and when to post, what content is working and other ways of cross-promotion, whether through content, following or commenting.”

In general, the key to OnlyFans or AVN Stars success appears to be posting anywhere and everywhere — and working with other creators to spread the nudes. “Generally, you want to advertise your site wherever and however you can,” says OnlyFans creator Romi Chase, who also runs an OnlyFans workshop. “It’s a business, and just like any other business, it needs constant advertising.”

That could mean advertising through online video games. “There are a lot of sex workers who are gamers that spend a lot of time playing games on Twitch and build engagement and awareness that way,” Eva says.

That could also mean making SFW content on platforms like TikTok. “Lily has gone viral for her TikTok-inspired posts,” Kawaii and Starkers explain. “She posts PG versions of her videos on the TikTok platform and naughty versions that include nudity on social media platforms, such as Twitter and Reddit, which don’t have strict rules against nudity. Everything links back to our OnlyFans pages, where subscribers have to pay to subscribe to and see our whole collection of content. Competition is very high in the OnlyFans world, so it’s important to be creative and business-minded to stay on top of the trends and attract attention on social media, which in turn converts to paying subscribers.”

The creativity inspired by platforms like TikTok and Instagram to remain PG can certainly result in all sorts of interesting approaches to advertising. “I’ve seen people wearing AVN Stars-branded clothing on Instagram Stories as a hint that they have an account, as we’re not allowed to mention it directly on IG and many other platforms,” Eva says. “This limitation does spur sex workers to create work that might be allowed space, which include books, cooking shows, writing for mainstream media or even embroidery for sale.” Take, for example, Naked Bakers, a YouTube cooking show run by an OnlyFans creator. “These products can help to build a profile and eventually divert people to paywalls. It can be a complicated and clandestine dance.”

Complicated and clandestine, indeed. But the struggles of advertising an OnlyFans or AVN Stars account go further than just that. “We generally try to be mindful of where we advertise our OnlyFans and keep it to platforms where people have purposefully sought out, or might expect to see NSFW content,” Kawaii and Starkers tell me. “For example, some creators have used dating apps like Tinder to advertise their OnlyFans links to people they match with or talk to there. We’d advise against this, as it seems unethical and dishonest to plug content to people who are on a dating app seeking genuine, real-life connections. We think this kind of ‘out-of-place’ advertising often gives OnlyFans creators a bad name. We encourage people to keep their advertising to their own socials and NSFW-friendly platforms.”

Not your personal socials, though! “OnlyFans creators tend to go by an alias and keep their personal and OnlyFans-related social media completely separate,” Kawaii and Starkers explain. “We believe it’s a bad idea to mix the two. Allowing people who know you in real life to have access to your OnlyFans content gives them the power to be malicious — we’ve heard horror stories of blackmail, stalking and even people having their lewd or explicit content sent directly to their parents.”

Chase agrees. “Many people get excited about the possibility of making a little extra cash on the side and seem to ignore the fact that it’s adult work,” she says. “It will have an effect on your future. It’s something you can’t ever erase, especially if you don’t take certain precautions. I recommend separating personal life from online sex work as much as possible.” On a lighter note, Phoebe adds, “I wouldn’t want my family to constantly have some sexy pictures of me on their timeline.”

Eva, meanwhile, has a different concern about using certain social media platforms to advertise her AVN Stars account. “I refuse to have a Facebook account, as I want to avoid their facial recognition algorithm,” she says. “I’m out to my family and friends, and they aren’t the worry when it comes to these platforms. Government and immigration facial recognition tech is more my worry. At this stage, I subscribe to the understanding that as soon as something is captured digitally, I’ve got to be ready for it to be seen by anyone and everyone. For me, it’s unrealistic to believe otherwise.”

Figuring out the right platforms and working on advertising are only a few pieces of the puzzle, though. Next comes branding. “The beginning stage of advertising our OnlyFans pages was to create our own personal brands,” Kawaii and Starkers explain. “This came with researching other OnlyFans content creators on their social media platforms and understanding what niches and audiences we could personally tap into. We took into consideration the theme of content we personally wanted to create, our boundaries, how we aesthetically look and the categories that naturally places us in. For example, when the sansa_starkers persona was created, this was at the height of Game of Thrones’ popularity, which tapped into people’s fantasies of seeing a naughty side of Sansa’s character and matched my look as a redhead.”

Creators without large social followings to tap into also benefit from offering deals to new subscribers. “We often offer incentives to potential subscribers in order to boost sales,” Kawaii and Starkers tell me. “Sometimes this can be via offering a discount on the subscription price or offering an extra, like a custom photo or a ‘dick rating’ (where the creator receives a dick pic from the subscriber and gives them a descriptive review) to each new subscriber during the deal. These are often used by newbie creators to build initial subscribers when they’ve yet to build up a lot of content, or to boost sales during slow periods for established creators.”

Free trials and bundle deals are also often employed. “Free trials are very popular to try to boost up the number of fans,” Chase says. “Many creators offer discounted three-, six- and 12-month bundles as well. You can also offer discounted memberships to expired users to try to encourage them to resubscribe to your page.”

Advertising, collaborations, branding and hot deals aside, the final key to success on platforms like OnlyFans and AVN Stars is figuring out what works for you. “Position yourself in a way that’s going to be sustainable for you,” Eva suggests. “There are creators who post once or twice a day, which includes a very short, candidly shot video. There are those who do selfies most days and a pay-to-view video once a week. However, it needs to be something that suits your capacity. Test out different prices and posting to see what works for you for a few months, and let a bit of that mindset continue with you. It’s also good to note that what can really tip you over into far higher earnings aren’t the subscriptions, but the extras, like tips and pay-to-views. Engagement with key subscribers is a great idea if you’re ready for it.”

And remember, sex work is still work. “OnlyFans may seem like very easy and quick money from the outside,” Kawaii and Starkers explain. “However, unless you already have a large following to advertise to, it’s a full-time job to research, adapt, create content, market it effectively and then gain and retain subscribers in an extremely saturated market. For every creator making tens of thousands, there are hundreds of creators who are making very little, or never even making one sale. It’s also important to think through the decision to get into adult work, as it can have long-lasting repercussions on your personal life and professional future. For someone who has an entrepreneurial spirit and is fully committed, however, the money-making potential is much greater than most other professional career paths.”

And the friends you make along the way are pretty nice, too. 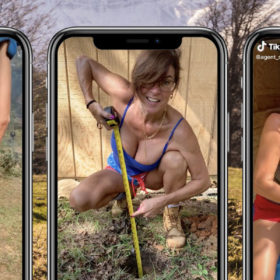