All the Bizarre Ways Men Use Bath Towels

'I don’t wipe my ass with it. I actually wipe with toilet paper every time I get out of the shower. Some people think that’s weird'

Despite growing up with four older sisters, I’ve retained a few admittedly repulsive habits, and my towel situation is one of them. If you’re anything like me, you own one singular towel and you’re not sure where it came from — it appeared in your dorm or apartment one day, and you’ve used it ever since.

The worst behavior I’ll admit to is forgetting to bring my only towel into the bathroom and drying off with the hand towel instead — taint and all — and then putting it back on the rack. I know, I’m a monster. Please don’t tell my fiancée. 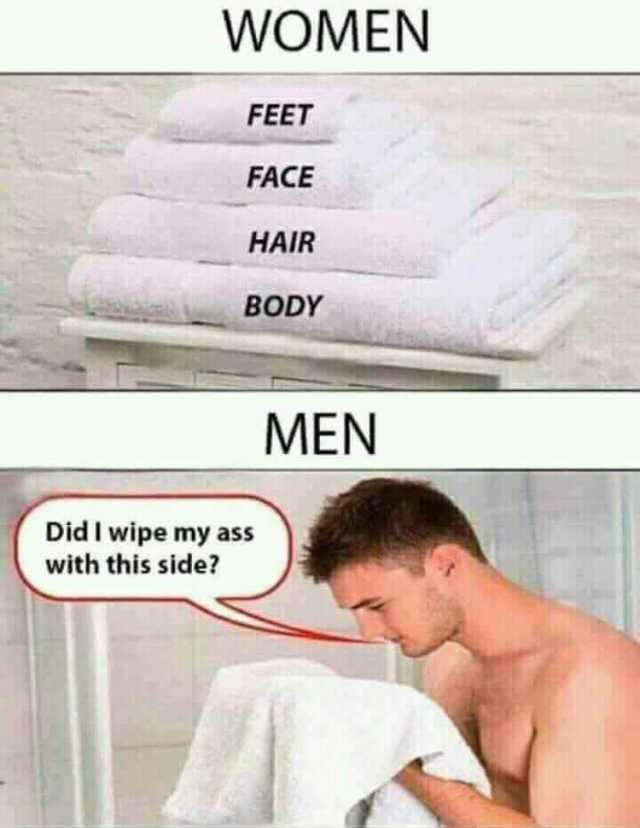 In fact, for complete transparency’s sake, here are all the towels in my apartment right now: 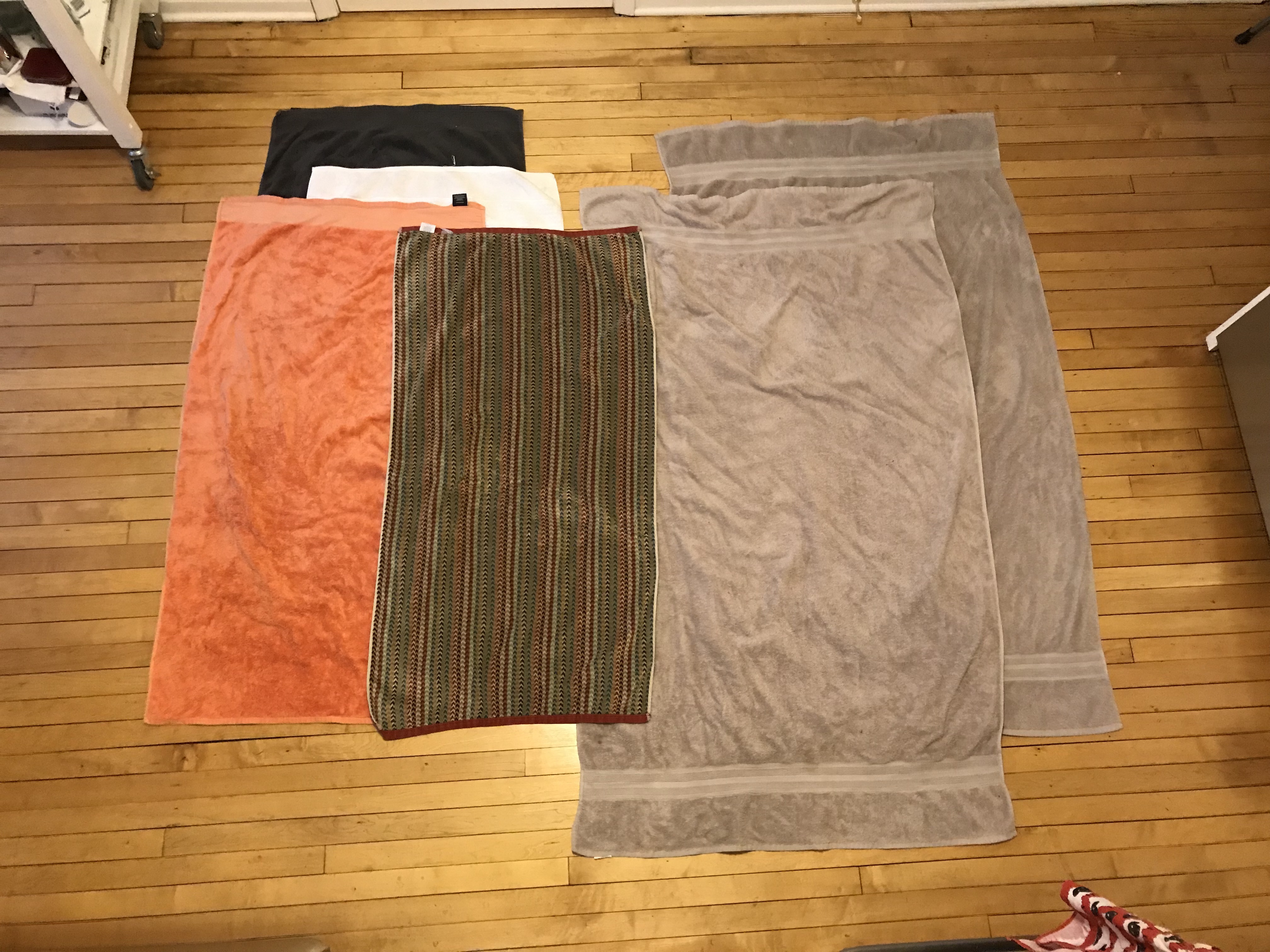 The two big gray things are inherited from my fiancée. I have no idea where the black, white and orange towels came from, and the brown multicolored thing is mine — ol’ reliable. It’s the towel I use after every single shower and wash only when it really starts to smell. I have no system for it. I’ve never developed a skin disease, so everything is fine and I won’t change.

Or so I thought. Then I saw this viral tweet by journalist Yashar Ali and had a heart attack. Apparently I need to vastly increase my towel budget by about 1,000 percent.

And it brought up the vital question: What is a bath sheet, anyway?

It’s all been an interesting development in the eternal game of Man vs. Towel, which we’ve been covering since Miles Klee’s infamous trip to Target. It got me thinking: How do other men dry themselves? Is there a commonly understood guide to towel behavior, or have we been inventing our own deranged towel rules, just like we do with skin care?

Personally, I abide by the shower-squeegee technique, but after that I typically use one end of the towel for my perfect face and defined chest, the other end for my chiseled legs and buttocks, and the other side for the, uh, rest. And while using the same towel over and over again without washing it seems like something a certified “adult” should not do, owning and maintaining 40 towels seems like a lot.

So what’s the right answer? We reached out to a whole bunch of dudes on how they use their towels and why.

Ya man Z rocks two towels at any given time: One goes around the waist upon exit from the shower, the other dries the rest and then gets wrapped around my neck, over the shoulders. Then I leave the bathroom and walk around my place for like 30 minutes, air drying like a Russian gangster that just left the banya. I make some toast, have a cup of coffee, maybe I take a look at the paper.

When I’m mostly dry, I slap my wife on the booty, head back into the bathroom to touch up the cracks and hang the towels back on the door. No accounting for which towel was which because overnight everything is forgotten and the towels are new again. I have no idea how often they get washed because my Mrs. takes care of that.

I own six towels, but personally, I use only one and wash it only as soon as it starts to stink, which is usually after like one to two weeks of use. My fiancée, being a biologist, takes some umbrage with this. She uses two, one for her body and one for her hair. When I asked her how bad using one towel really is, she responded that “germ proliferation in towels is really disgusting,” and that “towels are the perfect vehicle for germ and bacteria to grow — they have humidity and don’t get directly put into some sunlight.” She also said “There is a high chance that if you don’t wash your towels very often that they could be the dirtiest place on your home.”

My system is five consecutive days of use per towel, then it’s in the laundry. I have three towels at my disposal at all times, and probably about six for our household (just my wife and I).

An interesting thing about towels to me: washcloth towels. We had these in my house growing up but only fancy ones as decorations. I’ve since learned that this is cultural. Other people know and talk about how white people don’t use washcloths, we just use our hands. I now use a washcloth in the shower also.

The way I see it is I’m only using my towel to dry off my body that I have just cleaned, so there is no issue with using it seven days in a row. I don’t wipe my ass with it. I actually wipe *inside the crack* with toilet paper every time I get out of the shower — some people think that’s weird, but I I like to keep it clean down there. I’ve owned the towels for probably five years, which sounds like a long time now that I’m saying it, but honestly they’re in great shape.

I own three towels and cycle between them, using the same towel probably for a week straight — two of them I bought myself, and the other is from my parents. I shower every morning and then I put it with my dirty laundry and go to the next one, which is folded and stored in a closet.

Usually I do laundry once very week or so, so I very rarely even use the third towel but I like to keep it around just in case I need it, maybe to lend to a friend who is in town and sleeping on the couch, or in the summer use it for the beach. This way I don’t have to worry about dirtying my normal everyday towels with sand or something.

I have a system for drying that I’ve been doing since I was a kid. I have no idea if it’s a good system or not. But if I ever try to change how I dry myself I get confused and have to start over. I’ve never thought about it, but since I have the same routine every morning/evening, I probably am using the same parts of the towel for the same parts of the body.

I’d guess of “usable” body towels, my wife and I probably have six. We have a few more ragged ones that we’ll use for cleaning things. My two kids probably have about six between them. My wife and I have had ours since we got married, about 15 years. 😁

Absolutely no idea why, but we don’t use [the kids’ towels] and they don’t use ours. It’s not really a “family rule” or “policy” or anything, just sort of the way it’s worked out.

I personally use the same towel for about four days. If you hang it up right, it’s no problem at all — and by that I mean, well, my philosophy is basically I’m already clean when I’m drying off, so the towel is pretty much just gathering water (water which I hope is clean). Anything wet will get moldy/mildewy after a while, so I guess, yeah, if it can stay somewhat dry, it should be good for a few days at least.

When it comes to using a new towel, it’s pretty much a feel thing. Which, probably, now that I think about it, means I’m going too long. It will start to not be as “fluffy,” a little stiff in parts. That tells me it’s time for a new one.

I use one towel until it starts smelling moldy, which takes about two to four weeks. At this point, I’ll throw it in the laundry basket and grab one of my other two towels to use.

Of the dozens of towels in our household, I would say that only three are uniquely “mine,” meaning that 1) I owned them before marriage and 2) they are used by me regularly and exclusively. I’ve had these plain blue cotton towels for about three and a half years — ever since I bought my first house in September 2015. Shortly after I closed on the house, I purchased the towels at Bed Bath & Beyond with one of those 20-percent-off coupons they always send. I or my wife probably wash at least one of my three towels at least once a month, along with the rest of the laundry.

I should also note that I don’t use my shower towel for after I wash my hands when using the toilet. For this task, I use special “hand towels” that my wife has placed in our bathrooms. I do not consider these towels “my” towels because my wife uses them as well.

Note that before I got married, I would just dry my hands on the same towel I used after I showered; I did not have separate “hand towels.”

It’s just me at my house, so I own four bath towels for my bathroom, and have used the same four towels for just under two years.

I’ll use the same towel multiple times if there is a day between showers, because it allows the towel to dry, up to usually a maximum of four uses. If the day requires more than two showers, I use a new towel for the second shower because the towel isn’t dry. Then I have two towels to alternate between for the next few days. Jesus, this sounds completely insane now that I’m saying it…

In general, I believe a dry towel is a clean towel, at least for a couple of uses. Joey and Chandler from Friends had this same discussion [about soap] 20 years ago, but I was doing it before them.

But this is where this goes further off the rails: Besides my four-day rule, when it comes to needing to switch towels… you just know. I don’t know how to explain it, I just tend to switch towels.

Using the same part of the towel for a designated body part is crazy. I can’t keep track of what day it is that early in the morning, let alone which body part gets which part of the towel. In my mind, everything is clean, and [it was clean] when the towel was first used, so let’s use it again willy-nilly.

I use bright white towels and I always use bleach when I wash them. I have very few other white items that I bleach because, let’s face it, I’m a single guy and my laundry skills are less than spectacular. So I tend to bleach towels on a less-frequent basis, and also after all other laundry is done, so I don’t screw it up.

For the record, I am a well-functioning 46-year-old man who can tie his shoes.