Despite what it sounds like, GPS tracking in relationships isn't always stalker-y

Two years in, Mike Mancini and his girlfriend agreed it was time to take their relationship to the next level. The couple had just moved to a new city, and it was only natural that they solidified their partnership and made a lasting commitment to each other.

They opened their iPhones and turned on location sharing — indefinitely.

“I don’t think there was even a reason,” Mancini, a media director, tells MEL.

Mancini’s girlfriend disagrees. “[He] was always late,” she says. “This way we could see where we were. Plus it’s good for safety, and if we lose our phones.”

To some, it may seem like a breach of privacy, or a lack of inherent trust. But Mancini believes phone tracking is pretty common among younger couples, many of whom were raised on iPhones, a device with location data built in.

Mancini even shares his location “with a group of, like, 10 friends.”

“Everyone else was doing it,” his girlfriend tells me.

Is location tracking the new secret handshake? Should the rest of us — including slightly older millennials like me — get on board?

Recently, my fiancée asked — in a sort-of-joking, sort-of-serious manner — how I’d feel about sharing my location with her. I wasn’t sure what to do besides acknowledge the chat with a thumbs-up emoji and then ignore her request. 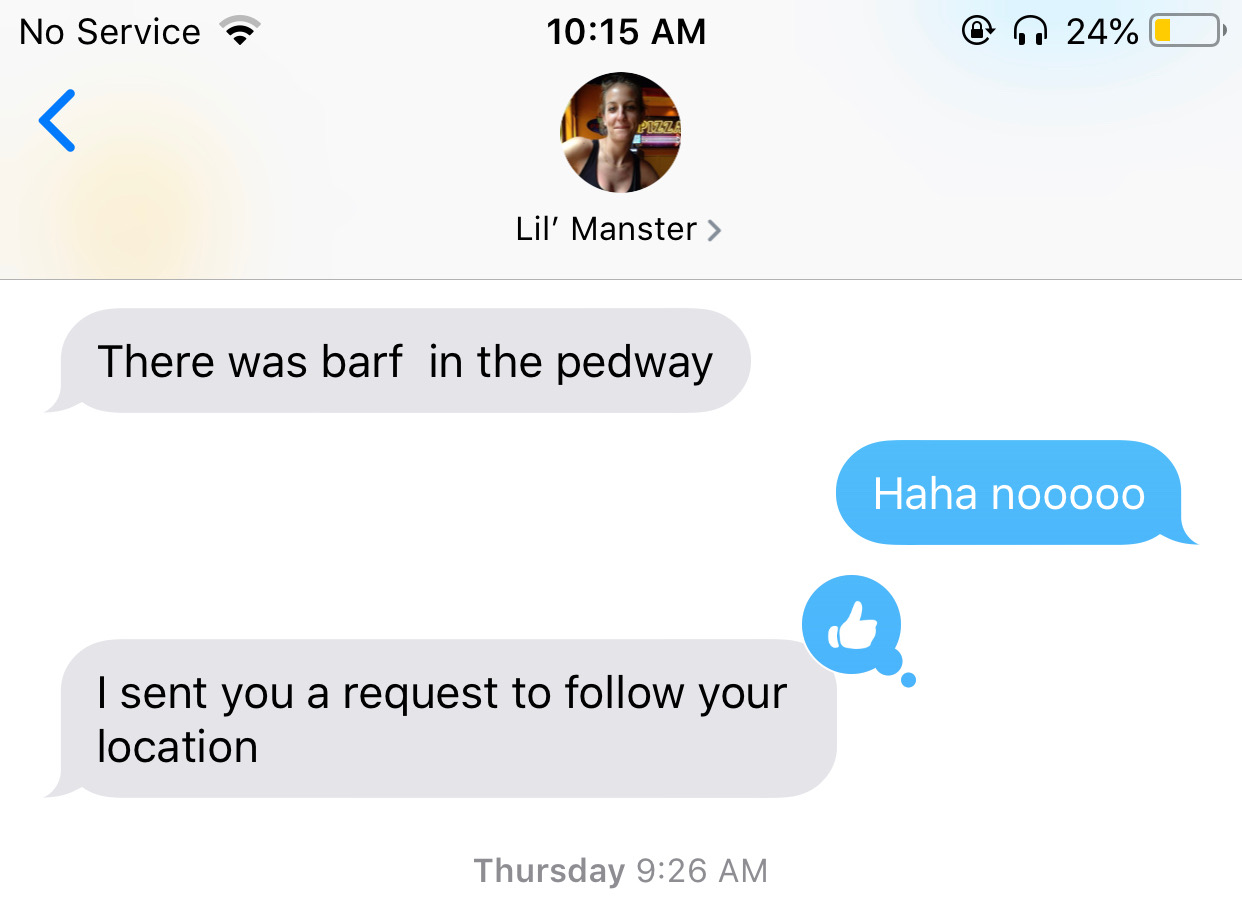 Yeah, a jerk move. Listen, I don’t have anything to hide. I work from home, so I’m almost always moping around our apartment or at a coffee shop, and I don’t really go out or do anything else. But at the same time, I’d like to retain some semblance of independence and individuality, if only for my ego’s sake.

I took to Reddit to see if this has been an issue for other guys:

The general consensus varies. One one hand, you’ll find opinions like that of u/Password_Not_123, who says:

“I don’t share it with my girlfriend of 5 years, or anyone for that matter, because they don’t need to know. If your SO can’t trust you on where you are and thats why she wants it, then you other issues. But having nothing to hide is good for relationships. I don’t try to hide where I am, but I feel if you can’t trust me, then we have problems.”

On the other, you’ll find couples like Mancini and his girlfriend, who do it out of convenience. “It’s not about trust or making sure that we’re not cheating or anything,” he says. “It’s more of a useful thing for times where we’re meeting up and I want to see how close she is to the destination, or checking to see if she’s still at work without asking her. One time I even helped her get her phone back when she left it on the train, because I could see its location still.”

Doesn’t it feel… I don’t know, invasive? I asked Alana Ogilvie, a couples therapist in Portland, if there was a right answer to this conundrum. “I don’t exactly have an opinion on whether couples should share their geolocation or not,” she tells me. “If as a couple you decide you want to know where the other is and you agree geolocation is the best way to do that, who’s to say you can’t? Or if you decide it’s weird and too invasive for you, then don’t do it.”

She sees both sides of the argument — how it can be an invasion of privacy for some, but a sense of safety and connection for others. “If I had that scenario in my office,” she says, “I’d want to know why both of them have the position they do on the issue.

“Once you get at the root of the issue, there might be more space to be empathetic toward each other and actually come up with a solution that works for you, whether it’s tracking location or not.”

Brandon, a 38-year-old in Portland, says he and his wife have tracked each other for about six years using the Find My Friends app — for safety, and to better coordinate the inner workings of their family.

“We first started using it because I’m a technician who goes around to various people’s houses. I cover a fairly large area, and the end of my workday is extremely variable. While working, I usually leave my personal phone in the truck and might not check it until I’m almost home, so it let her know where I was, that I wasn’t ‘in a ditch on some back road bleeding out’ (her words), and gave her a little bit of an idea of how long it’d be till I got home.”

“I definitely wouldn’t have gone for it if our relationship were only a year in,” Brandon adds, “but for us it’s really not an issue of trustworthiness, but rather, peace of mind. If a couple wanted to make sure the other wasn’t doing anything behind their back, I’d say they should be looking at counseling rather than a nanny app.”

He adds, “As a side note, it also lets me know when she’s coming home from work, so I can turn off the game I’ve been playing and bust out the chores I was supposed to do while she was gone.”

Hub, a 23-year-old in California, says he “ultimately gave in to sharing [his] location” because he wanted “to gain her full trust in the relationship.”

“I have nothing to hide,” he says. “Though I do know it is out of her insecurity to want to track me, I partly understand her concern. We are in a long-distance relationship, and [I was] cheated on in my last relationship that was also long-distance. I’m not always checking her location; I don’t feel the need to every day. But if we were to meet somewhere and if she’s running late or I beat her to a place, I’ll track her to see how far she is.”

“I guess, in an unhealthy or controlling relationship, that’s a feature people would take advantage of,” says Chad, a 31-year-old living in Las Vegas. Chad and his girlfriend share each other’s location, “but in our relationship we just trust each other. For instance, in theory she could easily jump on my computer and sift through all my emails, but she probably hasn’t — not that I’d care — because there really is no need for it.”

“It’s just really efficient,” he tells MEL. “For example she can be taking a nap, wake up, notice I’m not home, then see where I’m at. If I’m at something like Whole Foods, she can just shoot me a text asking to pick up something while I’m there. Or since I drive around a lot for work, I can see what side of town she’s at the moment and if she’s around, we can meet up for lunch in between whatever she’s doing.”

According to Ogilvie, this kind of location sharing all sounds reasonable. “How you meet the need for connection and security in your relationship can be deeply personal, and acting on the ways that help you feel safe isn’t pathological,” she says.

However, not all relationships are equal. Ogilvie adds, “If we’re talking about partner A needing to check in on partner B in order for partner A to feel safe, we may have another story. Using geo-location as a means of controlling, manipulating or stalking your partner isn’t about connection, safety or security — it’s about having power over another person, and that’s not okay.”

I ultimately caved and shared my location with my fiancée. So far, I’m able to see she’s at the airport three hours early for her flight, and she can see that I’m going on day three of not leaving our apartment.