Heirloom? Tomato paste? Bloody Mary mix? Which will provide the most of those sweet, sweet antioxidants?

In a recent and momentous scientific investigation, it was discovered that dudes who consume two tablespoons of concentrated tomato puree on a daily basis have more potent sperm, so please excuse me while I Naruto run to the nearest grocery store.

Besides having the capacity to improve load quality, tomatoes are healthy for an assortment of reasons, something nutritionist David Friedman, author of Food Sanity: How to Eat in a World of Fads and Fiction, explained to me in detail a while back. “They contain a high amount of lycopene, an antioxidant that’s been linked to many health benefits, including reduced risk of heart disease and cancer,” he said, adding that cooked tomatoes contain four times more lycopene, the antioxidant believed to promote sperm potency in the study mentioned above, than uncooked tomatoes. “Tomatoes are also a rich source of vitamin C, vitamin K, potassium and folate. Plus, the skin of a tomato contains naringenin, a flavonoid that’s been shown to decrease inflammation, and chlorogenic acid, a powerful antioxidant compound that may help lower blood pressure.”

Tomatoes — and the products we make with them — come in many shapes and forms, though, some of which are substantially more processed and brimming with all kinds of extra ingredients. So in order to get the most of their benefits, I asked Dana Hunnes, senior dietitian at the Ronald Reagan UCLA Medical Center, to help me rank a whole bunch of tomatoes and their offshoots by how healthy they are — from ultimate nut-booster to not a good choice at all. 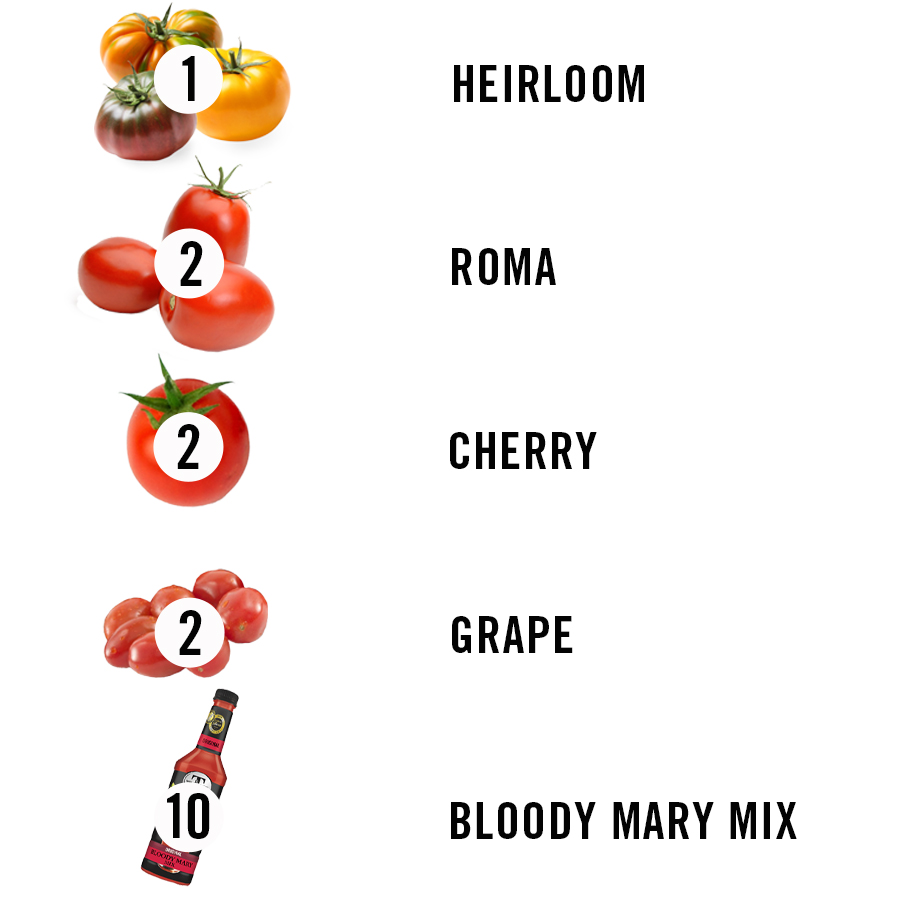 1) Heirloom Tomatoes: “Heirloom tomatoes are typically the healthiest, because they’re not genetically modified and tend to retain the highest level of antioxidants of all the tomato varieties,” Hunnes says. Now, it should be noted that GMOs (genetically modified organisms) are not inherently unhealthy or dangerous. As this Harvard article explains, “GMOs have been found to exhibit no toxicity, in one generation or across many. Though each new product will require careful analysis and assessment of safety, it appears that GMOs as a class are no more likely to be harmful than traditionally bred and grown food sources.” In fact, in most cases, science shows that GMOs are equal in nutritional value to their organic counterparts.

That said, GMOs have been associated with an increased use of pesticides and the like that contain harmful ingredients, such as glyphosate, which is toxic to both humans and the environment. In other words, on a small scale, GMOs are fine and dandy, but on a large scale that involves our suspect manufacturing processes, GMOs could pose some problems.

2) Beefsteak, Roma, Cherry, Grape and Pear Tomatoes (tied): Hunnes says all of these are tied for second place, even though none of them are “that particularly different from the heirloom. The only major difference comes from the fact that many of them are hybrid varieties and may have a slightly lower level of antioxidants. Moreover, many of them are often picked before they’re ripe, for storage purposes, making them slightly heartier but not quite as healthy.”

When a fruit or vegetable is picked before reaching peak ripeness, it has less of an opportunity to cultivate the entirety of its nutrients. “The ripening process is a somewhat oxidatively stressful situation for plants, so they develop antioxidants to defend themselves against that stress,” Ohio State University horticulture professor Joseph Scheerens explained to Shape.

7) Sun-Dried Tomatoes: “While their antioxidant levels ounce-for-ounce will be higher than fresh tomatoes, because they’re concentrated, they also have a tiny bit more sugar than a fresh or raw tomato product,” Hunnes explains. “Still, these are very healthy overall, and there’s no reason I’d say to not eat this product — other than if you desperately need to watch your carbohydrate or salt intake.”

8) Tomato Paste (or Puree): Tomato paste is basically a cooked, concentrated version of tomatoes, and remember, cooking tomatoes increases the amount of antioxidants they contain. However, the seeds and skins, both of which are high sources of vitamins and minerals, are usually strained out during the production of tomato paste, which is unfortunate, but we’re still talking about a fine product. “Again, the antioxidant load is very high,” Hunnes says — remember, according to the study we started with, more antioxidants mean danker sperm and, y’know, other stuff that keeps you alive or whatever. “It’s also low in calories overall, so there’s no reason to not eat this product.”

9) Ketchup: “Ketchup contains just as much, if not more sugar than actual tomato products in many cases,” Hunnes warns. One tablespoon of Heinz Tomato Ketchup, for instance, contains four grams of sugar, which can certainly add up, depending on how much of this stuff you put on your dog. “Ketchup is still fairly high in antioxidants,” Hunnes continues, “but in high doses, it would provide too much sugar and too much salt. However, most people don’t use it in such high doses.”

“Overall, this is still a fairly healthy product,” Hunnes concludes. “If you can find a no-sugar-added product instead, or basically tomato paste, even better.”

10) Bloody Mary Mix: “While still containing tomato product, Bloody Mary mix also has quite a bit of salt in it, so of course, it would be my lowest on the list of healthfulness,” Hunnes says. One serving of Mr & Mrs T Bloody Mary Mix, for example, contains 660 milligrams of sodium, or about 30 percent of the suggested daily intake. “If you were just going to drink Bloody Mary mix on its own, I’d recommend either low-sodium tomato juice or low-sodium V8 Juice as a substitute — in fact, I’d even recommend those in Bloody Marys, as opposed to Bloody Mary mix. But again, this is still an overall somewhat healthy product, if we’re comparing all these products against other things I’ve been asked to look at in the past.” Obviously, adding alcohol to the mix, as most everyone does, makes this stuff worse.

In the end, this was a pretty healthy ranking, through and through. And if anything, I now feel confident in my very basic habit of getting wasted on just straight Bloody Mary mix, no alcohol necessary.