As far back as he can remember, Lawrence, a 28-year-old in London, has been a fan of Formula 1 racing. For the uninitiated, that’s the type of racing with the cool cars.

Lawrence’s father used to be a racing driver and racing instructor, and many of Lawrence’s most cherished memories evoke the carefree weekends the two would spend watching the sport together. “The F1 weekends were the best,” he tells MEL. “We would make the TV room dark, put on the 5.1 surround-sound system, fill the room with snacks and drinks and watch every moment of it.”

But since those days, the sport has changed. It’s become a much “more clinical affair,” Lawrence says: Everything is so fine-tuned and data-driven that the sport has lost much of its excitement and strategy.

“I miss the days when Formula 1 was a more exciting spectacle, with complicated fueling and tire strategies for the race, [and] the roaring V12s and V10s,” he says. So, like an NBA fan bemoaning the current era of data-driven, three-point-heavy games, he took to Reddit to see if he could find some fellow like-minded people.

Some Formula 1 courses, or races, weigh strategy and analytics differently; as Lawrence puts it, they “make the garage more important than the driver.” So he had a simple question for his Reddit community: If you could eliminate a race within the year, which would it be, and why?

The race where this [issue] shows the most is Monaco, and I wanted to know whether like-minded people agreed with my train of thought. So, I went to the Formula 1 subreddit and posted:

The first response I received on the post was, “This will be amusing if it hits r/all.”

[Editor’s note: R/all refers to a Reddit homepage option that shows you all trending posts throughout the platform, regardless of what you subscribe to. Viral topics in niche communities often go mainstream, with mixed results.]

I didn’t really think too much of it, besides merely wondering why it would be an interesting thing to happen. I figured, maybe it’s a hotter topic than I thought, and it’s always interesting to see things being hotly debated on the front page of Reddit, since it’s a great platform for people of all opinions to be able to interact with one another from across the globe.

Then I re-read the title.

There wasn’t so much a moment of “panic.” I just wanted to change the title to make it more obvious what the topic would be.

I’ve been on the internet for many years, on different message boards and forums, from car-related, to games-related… all sorts of places where it’s possible to edit the title of your thread. But for some reason, despite [Reddit] being one of the world’s largest web boards, this isn’t possible. I considered deleting it and then reposting as a new thread, but I thought, Oh well, it’s not really going to get that popular to reach the front page. I left it as is.

It took only an hour [for it to reach] the top 25 of r/All, around 11 a.m. GMT, and my inbox was getting regular notifications on messages, generally split between three groups:

Thankfully, the moderators on /r/Formula1 are top notch, and we’re keeping on top of the third category, and deleting irrelevant or racism-inciting comments. I think maybe 80 percent of the racist comments were trolls, but there was a shocking amount of genuinely racist comments. Other than that, I think a lot of the upvotes came from people who just like to see something blown out of proportion for the comedic effect.

But within the next hour, it had reached the No. 1 post on r/all, and by this point, I was receiving more notifications than I could have time to read. That would be around 7 a.m. EST: American East Coast redditors were waking up, making a cup of coffee and browsing Reddit.

The mods didn’t reach out to me. I think (or rather hope) that it was apparent that my intentions were genuine. There was some genuinely good discussion on the intended topic, which I joined in and enjoyed.

I’m sorry to anybody who I made spit their coffee onto their screens. Around this time, a few people suggested that I make a TIFU (Today I Fucked Up) post about this, so I [made] a tongue-in-cheek joke post, also describing my internal need to read each message. Big mistake, because that gained attention too.

This post blew up much faster than the original post, and at a much larger scale. It reached No. 2 on r/all — right behind my [original] post — within 20 minutes, and overtook it to No. 1 soon after.

I was told that this has never been done before, for the same user to have both the No. 1 and No. 2 spots on r/all at the same time. At its peak, I had nearly 2,000 unread notifications and messages. I was doing my best to open and read each one as fast as humanly possible. In total I would estimate I received over 5,000 combined messages, DMs and comment notifications.

Unfortunately for me, I am very anal-retentive with things such as emails, texts, etc. I must open every single one. It would actually play on my mind so badly that I wouldn’t be able to sleep if I didn’t open them.

It took me the entire day and half of the next to get through them all. I had planned to do some laundry, but in my mind, reading these messages was more important (laundry got done the next day). I managed to get through them by mid-afternoon the next day, and I was receiving probably one message every 10 minutes by that point, rather than 10 messages every one minute.

I have learned that people love to participate in these things, in any small way.

The majority of messages were just people being in on the joke, and it was great to hear how many people I’d made laugh and smile that day. Even someone who told me they had been depressed for weeks and hadn’t smiled at all had managed to smile and laugh for the first time in seven weeks. 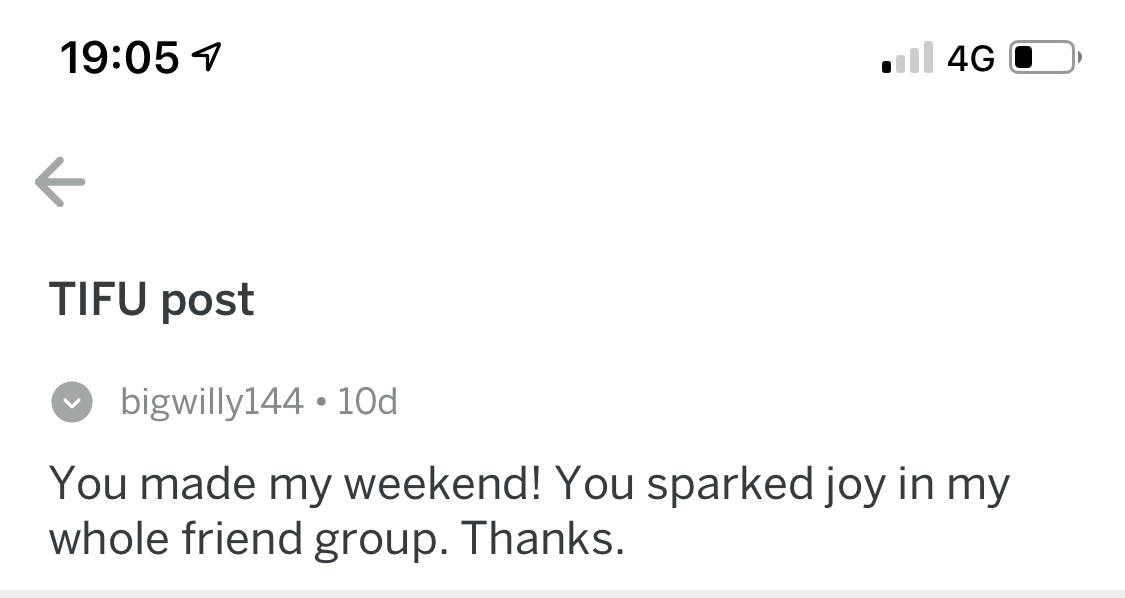 Unfortunately, a lot of them were genuinely insulting.

Strangely enough, I did receive several messages asking if I wanted to join in some sexual activities…

…One of which was some super-weird stuff involving incest and scat. 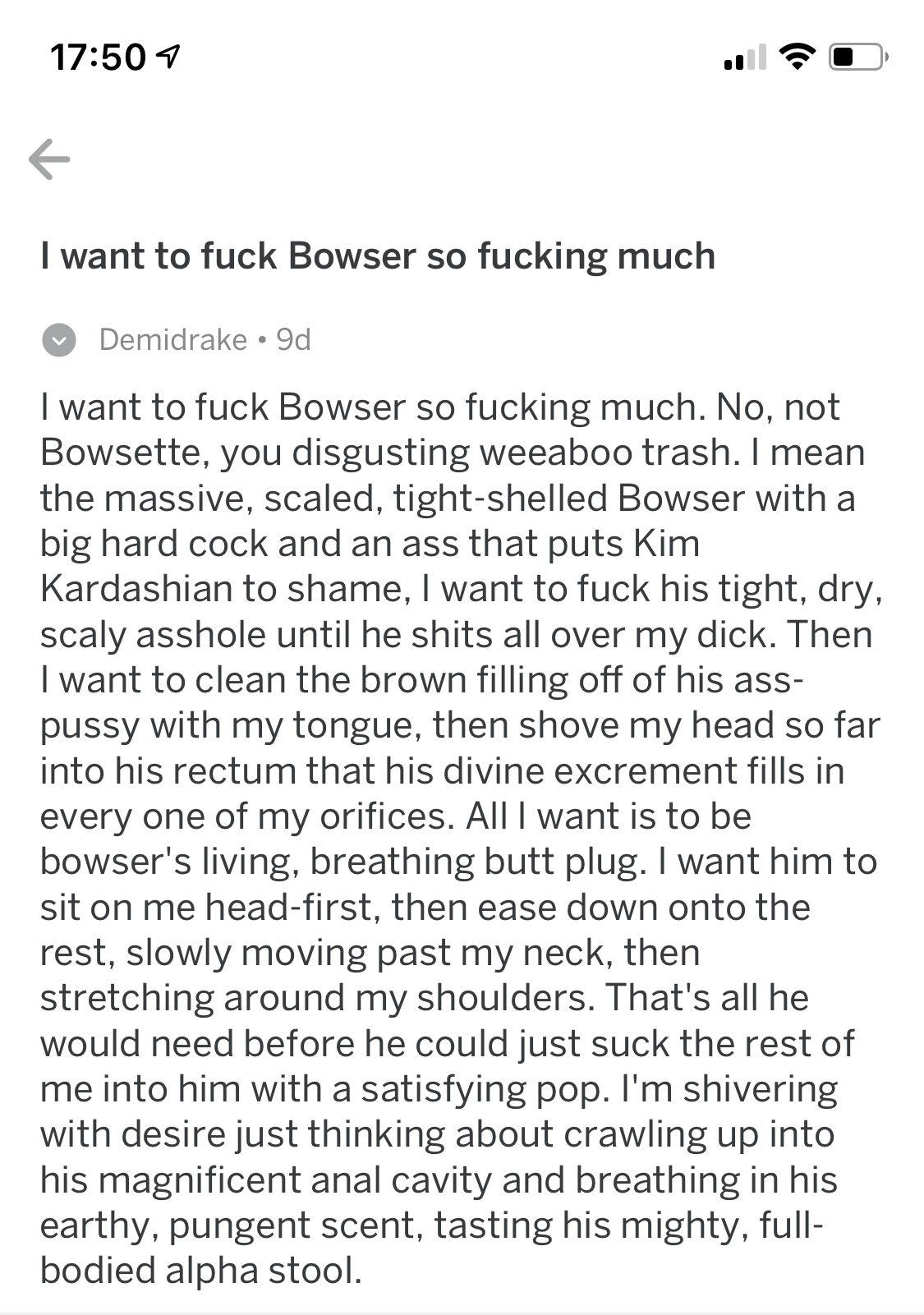 I was surprised, also, by how people seemed to be getting jealous at the fact that my posts were popular. I’m not one who usually tries to seek attention on Reddit; I normally post infrequently when I feel I have something that deserves to be shared or would generate a good discussion. I’m honestly not bothered about “karma” points. I’m so much more interested in the quality of content I post. 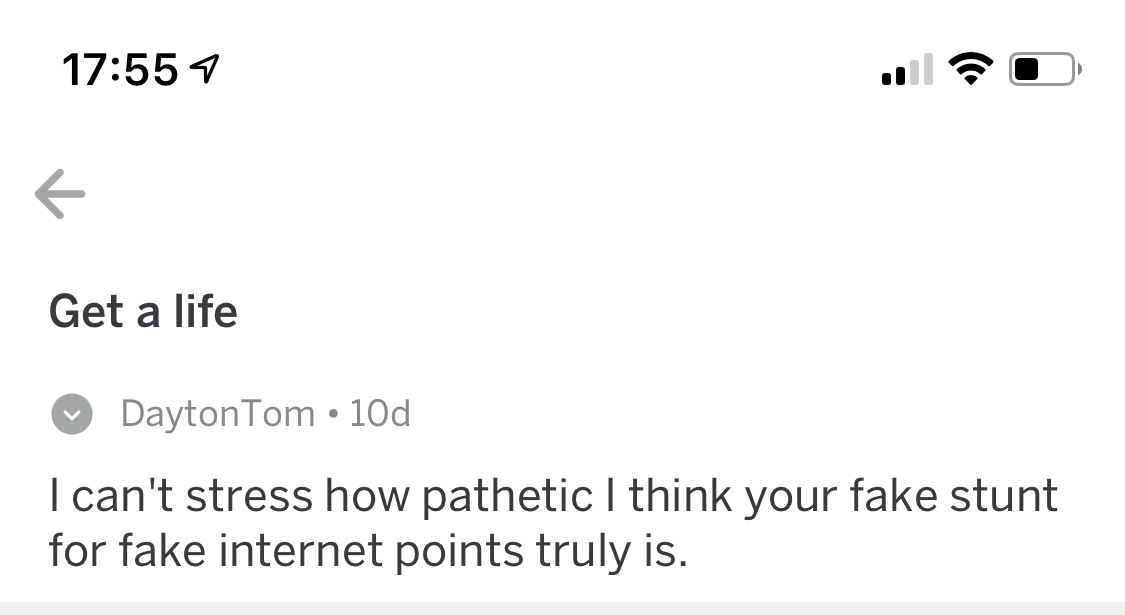 I tried to reply to comments that were something different, as I felt that giving the same response over and over again to the same comment would make my mind go numb. Any of the nasty comments I tried my best to ignore, as I knew these wouldn’t gain much attention, thankfully.

It was all very tiring. What was simply a quick question for F1 fans became a chaotic flood of race-baiting, anti-racist responses, genuine F1 discussion and a carnival of nonsense in between. I wasn’t prepared for it, to say the least — I’d had some sort of cold/flu at the time, and had spent the previous few days off sick from work, and hadn’t been having a regular sleeping pattern.

Because of this post, I managed to get five hours’ sleep in three days from feeling the need to read so much in detail. Nearing the end of the first day, I was lying down feeling very sleepy, and a couple of times managed to drop my phone on my face.

But now I’m all recovered. I’m still getting at least two or three messages a day still, but thankfully it’s very much calmed down, and I’m not getting any more racist comments or threats, besides the occasional downright weird messages. Who would fall for this?

— As told to Quinn Myers