Should You Fold or Wad Toilet Paper? A Physicist Settles the Debate for Good

And I'm kind of losing my shit over the answer

Occasionally, doing research for MEL articles leads me to question some of my core beliefs. For example, I thought it was normal to use the same towel for days on end, and just yesterday I learned my showering habits were all wrong. What else am I doing wrong? Turns out, wiping my own ass.

I fold my toilet paper. It’s the most efficient and effective way to do it, especially as I work my way to becoming a one-wipe wunderkind. But it’s also the subject of heated debate, thanks to the internet. Some people wad their toilet paper into poop loofahs — a practice that seems uncivilized and wasteful! Your butt deserves a perfect square, and your pipes deserve way fewer sheets than what you’re clogging ’em with.

Arguments for wadding vary. Some people are too lazy to fold. Some don’t have time to fold, they say. (Sure, Jan.) As for the folders, they say “not being a psychopath” is a compelling reason. More interesting is this: the purported abundance of surface area in a square. (Is that actually true? We’ll cover it soon.)

Even though I’m an esteemed and highly respected journalist, I love being wrong and getting owned. I once thought nothing could ever lead me to believe wadding toilet paper into a ball is the optimal way to wipe, but I now know nothing is sacred and I must reevaluate everything I’ve ever held true.

So I reached out to math and physics professionals to scientifically prove which method is superior: wadding toilet paper, or folding it.

Dr. Sam Novario, a theoretical and computational nuclear physicist who once blew up his stove for a MEL experiment, says the truth is actually much more complicated than what might appear on the surface. “There are whole mathematical sub-fields that deal with folding and functional origami.”

Still, like any good scientist, this didn’t deter him him from getting to the bottom of the issue. “In order to find the optimal solution,” he begins, “we first have to weigh the different goals that we’re trying to meet, reducing cost and time. This means that we’re trying to minimize the total paper usage while maximizing the wipe efficiency.” 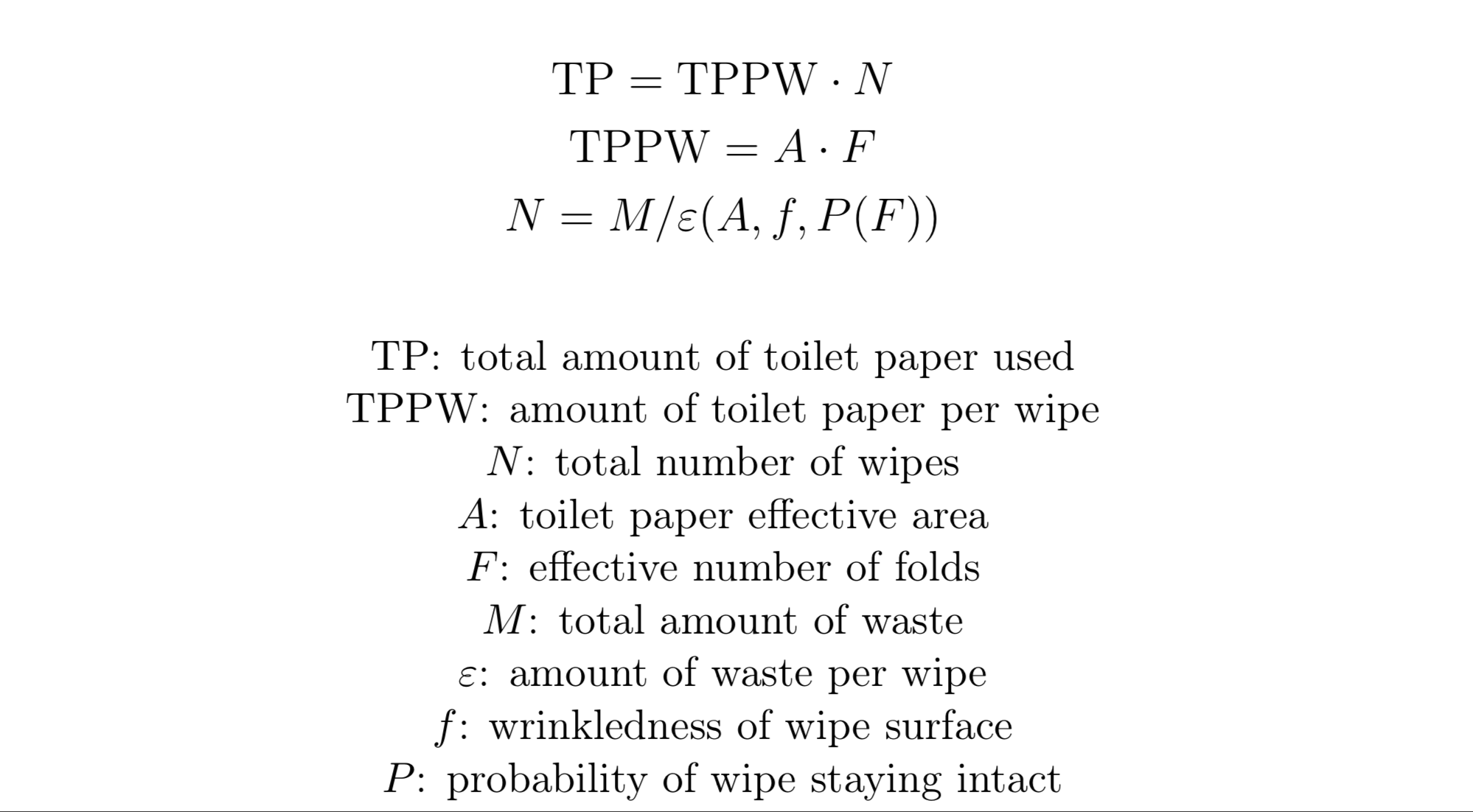 Minimum Thickness Threshold: At first, the basic equation seems simple enough: You want to get the most out of a single wipe and use less toilet paper. But this is also where things get complicated, Novario says. “We can try to minimize the total paper usage by reducing the paper per wipe, but this immediately calls the wipe efficiency and integrity into question.”

Wipe integrity, he explains, deals with the “sheer strength of the TP,” and the probability that the wipe stays intact, “which increases with a wipe’s effective thickness.” So what began as a simple matter of getting more shit per square now becomes a problem of probability and integrity thresholds.

Novario continues: “Assuming that a wad has twice the effective thickness as a fold with the same amount of paper, it will be twice as robust. But any extra thickness above some threshold wastes paper and reduces the effective area of the wipe.”

Setting Constants: You might think wadding wastes more paper, but Novario explains that in order for the equation to work, a limit must be found “above which no additional material is removed and paper is wasted.” In other words, both wadding and folding can waste paper in different ways — wadding because the effective wiping area is less, and folding because you might have 10 folds left once you’re all cleaned up.

There’s yet another variable we must assume constant in this equation: wiping style and pressure. Someone who wads and scrubs the living hell out of their ass is naturally going to think wadding is better. But to find a scientific baseline, Novario says, we must assume “a standard style and constant pressure between the fold and the wad.”

Finally, we must assume we’re wadding or folding the same brand of toilet paper, be it a $15 Charmin Ultra Soft Mega Roll™️ or the cell-thin, entirely translucent $3 Aldi brand. Wadding might appear to offer more efficiency in wiping due to the three-dimensionality of the shape, Novario explains, but at the same time, “expensive toilet paper has bumps and ridges” that can get you the same efficiency without reducing the wipe area.

Therefore, assuming a hard cap to the total amount of toilet paper used, and a controlled variable on toilet-paper brand, wiping style and pressure, we’re left with the holy grail: “the total wipe efficiency, or the amount of material removed per wipe,” Novario says, “which is equal to the total effective area of the wipe times the efficiency per area.”

Still following? Good! We’re about to get to the answer.

“Therefore, another balance has to be found, [and] we can collect all of this reasoning to come up with an optimal solution,” he says.

“A sufficient wiping area, for increased efficiency, is more easily reached with a fold of a few squares and would take twice as much wadded paper,” Novario says. “But this is only useful if it meets the wipe integrity threshold.”

He continues: “This threshold can be met by wadding, which also has the benefit of increasing the wipe integrity and efficiency per area. To balance the benefits of these two solutions, I would suggest a hybrid approach that uses the coverage of the fold and the sturdiness and wipe efficiency of the wad.”

He sent a diagram to illustrate the ideal toilet paper shape: a couple folded sheets with a crumple on top for extra waste-wicking wrinkles and folds.

“To build this solution,” Novario explains, “start with slightly more TP than you would for a minimal fold wipe. Then, fold approximately half of the TP with sufficient area and use it as the base, with the other half wadded on top.”

“In sum,” he concludes, “the ideal solution of wiping your bum lies in the middle: a hybrid solution of folding TP for coverage and wadding the first couple squares for maximum efficiency.”

If we can think outside the can here, there is a solution to this dilemma that leans into mathematics far too complex for the bathroom. Matthew Zaremsky, assistant professor of mathematics at the University at Albany, approves of Novario’s work in toilet paper studies. But, he says, the ideal TP wad takes the shape of a Hilbert cube, a compact shape that has infinite dimensions.

“This way, every time you wipe, you can fold the soiled part into one of the other dimensions and continue wiping with a nice clean part,” he explains. “You’ll never run out of dimensions, so in fact this single piece of Hilbert cube toilet paper is the only piece of toilet paper you’ll ever need, for the rest of your life!”

Lacking one of these, however, Zaremsky recommends wadding: “Whatever maximizes surface area is best.”

It should be said that Zaremsky is also a new dad — so he’s become something of an expert in the area. “Literally minutes before checking my email just now,” he says, “I had to wipe up a whole bunch of poop.”