You could be forgiven for punting on early aughts nostalgia. The era is still a bit too recent, and you can’t poke around the era too much before you stumble upon a festering sore like Entourage. The aesthetic was “cringe,” and fashion hasn’t circled around to redeem it yet. Also, in case you forgot, the political situation was fairly grim, if not as turbocharged as it is now.

Oddly enough, it is a relic of one of the few advancements we’ve made since that time that now boasts great retro appeal. The advent of the smartphone ushered in the new normal of social apps, GPS locations, streaming entertainment and limitless photography; we couldn’t wait to ditch the flip phones and their cumbersome T9 texting systems for the next-gen devices that would meet our every interactive and organizational need, futuristic secretaries for our pockets and purses. But because the iPhone’s role as an actual phone was in some way subordinate to its many other flashy functions, we lost a crucial aspect of phone culture itself: the hang-up.

What if millennials don’t hate phone calls because of the stressful interruption or sonic intimacy, but because we no longer have a satisfying method for bringing them to a conclusion? That dead air after the “bye,” when both parties are fumbling to hit the red button and drop the connection, was never meant to be part of the telecom experience. Sure, technology must forge ahead and whatnot, but the phone endured for more than a century before some engineer had the inexplicable urge to do away with the physical action that terminated a communication, whether in anger, defeat or simple impatience.

Too bad. Closing a phone gives you closure.

Moreover, the disappearance of the clamshell phone design strikes me as totally capricious and unwarranted. A flip version of the iPhone would protect your screen from cracks and smears. Maybe throw a locking mechanism on there for added security. No doubt Steve Jobs fought against this common sense, demanding a sleek rectangle that was all screen, no hinges or catches. But come on, it’s 2020. He’s been dead almost a decade. Can’t we have the option?

I just want to ask my buddy a stupid question and dismissively snap the phone shut as he launches into an answer — a thrill I haven’t felt since college. Instead my hang-ups are as frustratingly awkward as closing the Zoom window after a virtual work meeting. Unacceptable.

No, the absence of flip phones is not among the top thousand existential threats facing civilization today, and I can’t pretend that a Motorola razr renaissance is the cure-all for the moment. On the other hand, it wouldn’t be so difficult to bring this about — god knows Silicon Valley is constantly forcing “upgrades” on us for a quick buck anyway — and it would go a long way toward venting some national resentment. If we each had a few emphatic flip-offs every week, we might be better at picking our battles elsewhere. It is the punctuation lacking in our day-to-day dramas, the rhythm we lost to a frictionless user experience. Bring it back. Now.

Here I am, continuing to make the case, whereas if this post had been a circa-2006 voice call? I could have clapped my phone closed and let the sensation speak for itself. But then, I’m fantasizing about a world that remains out of reach — and a triumph of body language we did not think to celebrate until it was too late. Even now, I am desperate for some finalizing gesture, the hard click of a dialogue terminated. Our brains are so assailed by input that I truly believe having this one unmistakable boundary left would help get us back on track. And when this feature does return, don’t pretend it’s a novel gimmick — that’s history there, you understand. 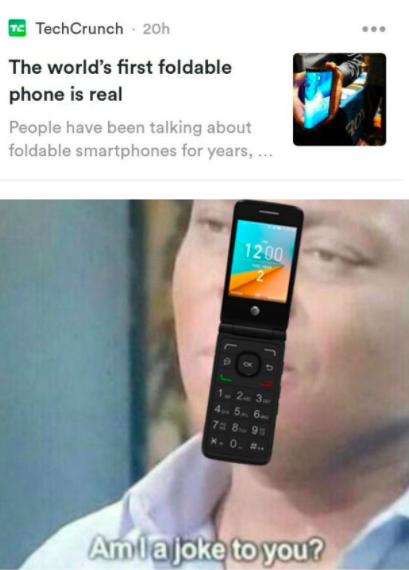