Financial Astrologers Are Watching Uranus for a Recession

Bankers, politicians, the European Union and the International Monetary Fund take it as a given: It was the greed of big banks — the billions in debt they issued in the form of subprime mortgages, and then the bets they made against the economy — that caused the 2008 financial crisis, stripping Americans of their homes, jobs and savings.

But Chandresh Mehta, a 29-year-old stocks trader in Mumbai, has a simpler explanation: The markets were under a celestial threat. It was caused in September 2007, when Saturn entered Virgo. “I’m not saying that the crash wasn’t the fault of big banks,” Mehta explains. “[But] I believe the crash wouldn’t have happened at all if they’d [paid] attention to astrological movements.”

Saturn, he adds, “means you must be prepared. If things are messy, you will be destroyed.”

Astrology is on the rise again, and so is our financial insecurity. They coalesce in a niche practice called financial astrology, which is premised on the idea that stock market plays can be more successful and lucrative if they’re made at the right time: literally, when the stars align.

What Is Financial Astrology?

I met Mehta on a financial astrology group called Astro NIFTY prediction. It’s a group of traders who believe that the key to making money on NIFTY, India’s official stock exchange, is to make critical trading decisions using the guidance of celestial positions and zodiac signs.

Mehta has been hooked on financial astrology ever since his cryptocurrency investments tanked. A friend of his, however, sold off his stash when it was at a high. The friend “knew a crash was about to happen,” Mehta says, because “Uranus had moved into Taurus.” Uranus represents “finance, money and stability,” and the move signified a drastic change in the markets.

What other wisdom can one glean from financial astrology? For one, you’ll always lose money in the markets when Mercury is in retrograde. Another claim: Shares in biotech are particularly valuable in Neptune-Jupiter cycles, because Neptune can represent change and disruption. Some financial astrologers even monitor the movements of the sun and moon, believing that the distance between them might be an indicator of how close we are to a global recession.

But astrology has long been an interest in financial circles, especially among among high-ranking Wall Street traders. One professional astrologist, Ray Merriman, has worked as a consultant in finance since the 1980s, providing investment advice and financial trend forecasting. And Seattle-based astrologer Robert Weinstein, who focuses on cryptocurrencies, tells me it’s “definitely a popular subject.”

People often “think of finance guys as straitlaced and buttoned-up,” Weinstein says. “But what a lot of people fail to realize is that they’re actually as superstitious as the rest of us. Not only that, but their jobs rely on them having an edge — any kind of edge — against their competitors.”

To Weinstein, astrology isn’t just a science: “It’s an art form, too.” It can take years to learn to successfully analyze the stars, he says. It takes a level of craft and patience that might not suit people used to the hustle of the trading floor.

Tricks of the Trades

Of course, every artist needs the right tools. Many members of financial astrology groups use software like Astrolog, which charts the precise measurements of constellational arrangements and analyzes them in relation to the value of stocks, shares and other commodities. 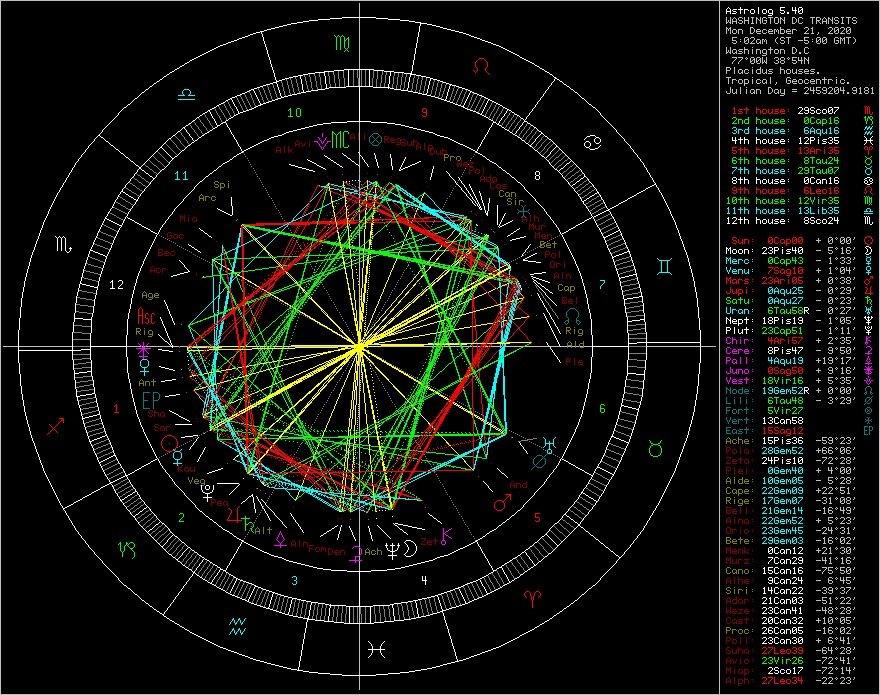 Earlier this month, a service called Bull and Moon, which claimed to help people pick stocks based on moon signs and personal charts, spread around tech news. Bull and Moon seems to be little more than a PR stunt, but it clearly tapped into the cultural moment. In an era of debt and uncertainty, it isn’t just high-powered traders looking for a financial edge.

Either way, Sunil says financial astrology is misunderstood. “It isn’t about predicting things before they happen,” he says, “it’s about noticing patterns and using the information around you to predict what things might happen and make sense of them.” He tells me he successfully predicted Brexit a year before it happened, when “Uranus entered Jupiter at the time of the [referendum]. Uranus can be associated with change and rejection of the status quo. When [Prime Minister] Narendra Modi won in India, it was the beginning of a Uranus cycle.”

What Financial Astrology Predicts in 2020

So what can the stars tell us about our financial future? Based on Saturn-Jupiter cycles and the Trump impeachment hearings, Mehta and Soni both think 2020 is going to be a chaotic year. They wouldn’t give away their investment strategies, but they tell me the current Saturn, Pluto and Uranus movements are rare configurations that harken back to the beginning of the Depression.

And so, he suggests, “I’d probably start investing in some precious metal.“