‘The Simpsons’ Is Haunted by a Hideous Freak Named Gumbly

Onetime fans are forcing a bizarre new character into ‘Simpsons’ canon. Is he real? Nobody wants to watch to find out

For fans of The Simpsons around my age, it’s customary to define yourself by a cutoff: At what point do you believe the long-running animated sitcom exited its golden age, or stopped being worth watching? The purists say any season following the eighth is dreck — and that some of those “final” episodes are mediocre, too. I see the drop in quality there, but I also note flashes of brilliance up to at least Season 14, which is when I quit keeping up. Even that extension, however, means I’ve watched less than half of The Simpsons as a whole — we’re in the middle of Season 32.

What on earth has happened on the show in all that time? When you jump the shark and don’t get canceled, how do you fill the next script, and the one after?

Well, to hear some tell it, the writers added a controversial character named Gumbly. 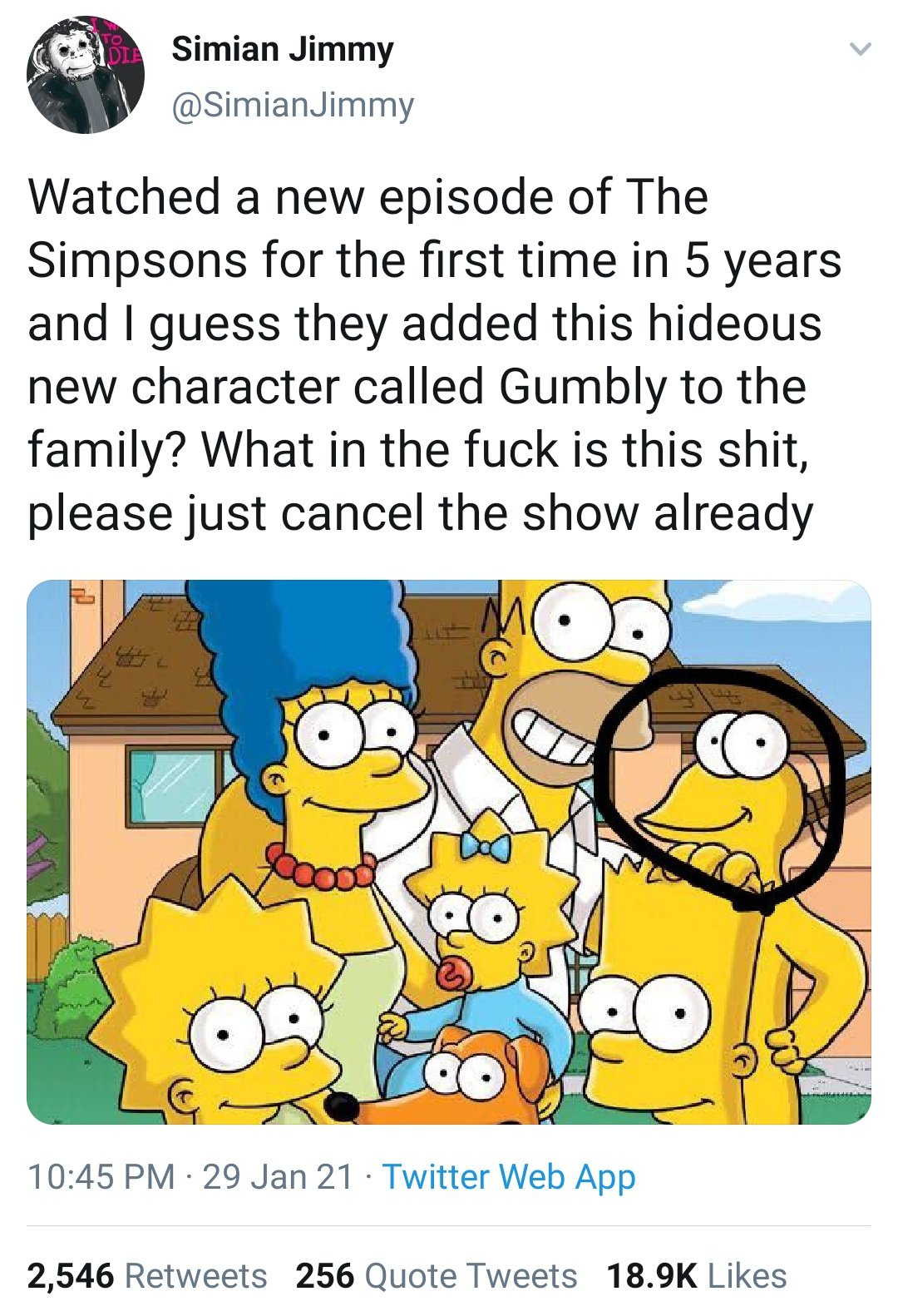 To be clear: There is no “Gumbly” on The Simpsons, nor any such malformed, naked, stringy-haired creature as depicted above. But on the other hand, can you really be sure of that? Given the hundreds of later episodes you haven’t bothered to stream, anything is possible. God knows how desperate the producers are to keep the premise afloat and somehow fresh when almost every imaginable plot has been exhausted over three decades. Without diving back into the series, there’s no way of knowing how far off the rails it’s gone. Gumbly, then, is both real and illusory, a terrifying specter of artistic decline whether he is part of the official canon or not.

In truth, Gumbly is the invention of a 4chan user who claimed that Simpsons creator Matt Groening wanted to insert the oddity into the family with Homer, Marge, Bart, Lisa and Maggie, as a sort of avatar for himself. “He wanted [Gumbly] to live in Bart’s treehouse and work at the nuclear power plant. He wanted this character to be versatile, and he could help any characters with their problems.”

Per this same source, Groening got pushback from the rest of the Simpsons team on this bizarre idea, and began to refer to Gumbly as “Weird Matt” or “Yellow Matt,” with the result that the pitch was ultimately scrapped and never brought to fruition. The name “Gumbly” seems to have been contributed by Twitter user @SimianJimmy in a since-deleted post, but elsewhere on 4chan, you’ll find people referring to him as “Skimpy.”

Phony “behind the scenes” Simpsons lore is common: There’s also an urban legend about a lost early episode in which Bart dies gruesomely. But, contrary to this story of unseen content locked away in a secret vault, the Gumbly meme has spawned lots of original images in a few short days. First he was a half-baked concept that didn’t air, then an awkward latter-day novelty, and finally, a beloved part of the cast who was, it turns out, in The Simpsons from the very beginning — you just weren’t paying attention close.

Gumbly has likewise managed to infiltrate Matt Groening’s pre-Simpsons comic, Life in Hell, extending his dominion beyond the boundaries of television. The insistence on his appearances and longstanding critical value to the program is like a coordinated attempt to force a Mandela Effect: You can’t believe your own memory.

Shitposting your way to viable hoax — some, confused, have asked if The Simpsons actually did add Gumbly in recent years — is one thing. It takes on a meta-metatextual level, however, when you recall The Simpsons satirized exactly this kind of hack TV move in the late 1990s. The episode “The Itchy & Scratchy & Poochie Show” from Season Eight, has Homer become the voice of Poochie, a cynically devised new character in the violent cat-and-mouse cartoon watched by the kids of Springfield. Meanwhile, the Simpson family suddenly has a chill, sunglasses-wearing college kid named Roy living with them, yet the rationale for this change is never disclosed.

Poochie’s debut is enormously unpopular, and he’s scrubbed from Itchy & Scratchy despite Homer’s protests. In tandem, Roy announces that he’s moving out of the Simpson household. Like so much else in the present day, The Simpsons essentially predicted the Gumbly joke, which forms a perfect circuit with the self-aware reality of the show. Gumbly was inevitable. 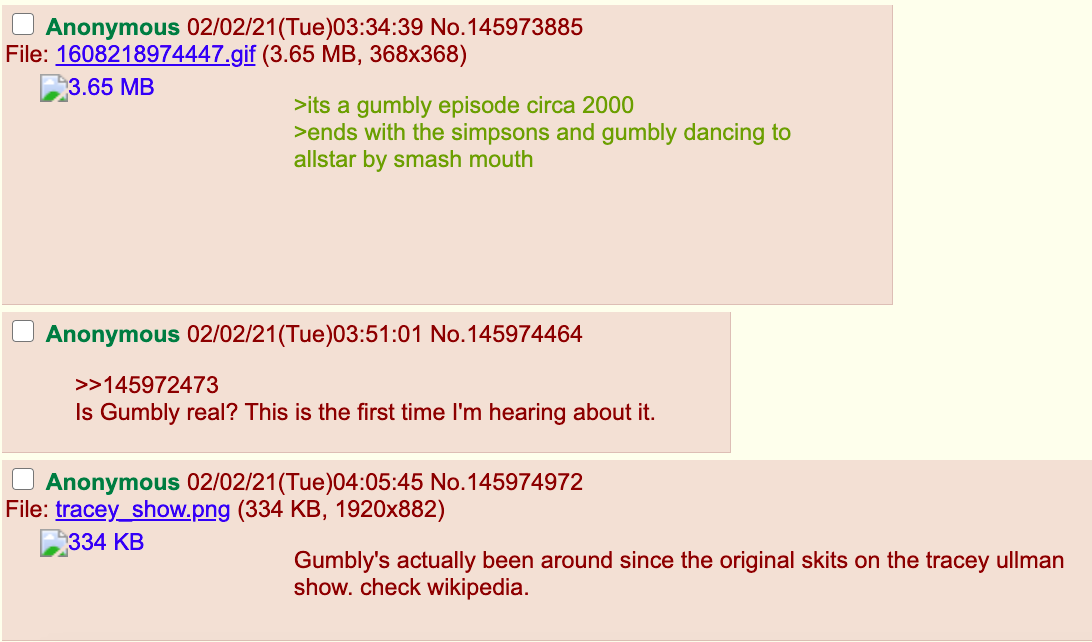 The prophecy may be self-fulfilling. For better or worse, The Simpsons has long acknowledged outside commentary and critique. If Gumbly reaches and sustains critical mass on the internet, the writers are sure to notice and consider at least a passing reference or easter egg. Until then, he remains the disquieting dream of a fanbase that feels the sitcom lost its way forever ago, a demon conjured by the emptiness of stale entertainment, and perhaps an omen that the worst is still ahead. Except, in his cringey fashion, Gumbly cuts a hopeful figure — as The Simpsons has yet to sink so low.

Again, not sure, haven’t caught up. Seriously, someone needs to confirm or deny the addition of Gumbly. I’d do it myself, but I’m busy rewatching Futurama.