How will TikTok, an app with a userbase of teens as young as 13, handle the spread of nudity on its platform? And does it matter if it’s covered by a filter?

To the tune of music producer LLusion’s remix of Roddy Ricch’s song “The Box,” a 17-year-old we’ll call Taylor waits for a translucent filter to take over his body. Once he looks like a human heat map, he lifts up his shirt and pulls down his pants, revealing a visible outline of his erect penis. The teen’s video reached 26,000 views before TikTok took it down for violating community guidelines.

Taylor uploaded his video to TikTok as part of the #Invisible challenge, which features dances and memes based off a filter that turned the user’s body into a gelatinous silver blob. Some users started getting risqué with the Invisible filter, dropping their pants and suggesting nudity. Eventually, TikTok removed the filter altogether, along with the searchable audio track.

The Invisible challenge trended at the same time TikTok launched a series of internet safety seminars in partnership with the Family Online Safety Institute to teach parents how to keep their kids safe online. TikTok, which has a large teenage userbase, has strict guidelines regarding sexually explicit content. “DO NOT post, share or send explicit content, sexual content or nudity,” the app’s guidelines read. It also bans “any sexually explicit content featuring minors.” (A TikTok spokesperson did not issue a response by the time of publication.)

Taylor, who verified his age to me with two forms of ID, wasn’t the only guy flashing his dick. I spoke with several other male users who took the #Invisible challenge to the next level and really got naked under the filter. Tristan Farrow, 24, recorded himself in a bathroom with just a towel wrapped around his waist. In his video, he removes the towel right when the filter appears. Did he actually get naked for TikTok? “Oh absolutely,” he tells me. Why? “‘Cause they can’t see. Makes it more interesting.” The video was removed for violating community guidelines. Later, Farrow reposted the same video, which is currently still up.

Other users insist their #Invisible videos are more wholesome. “Everyone keeps a second layer on under, obv. That’s about it,” says Eli Samuel, 18, who completed the challenge. One 15-year-old female TikTok user, whose video of her lifting her sweatshirt has 4 million views, insists, “I didn’t really flash the camera. And yes, I did have another layer on.”

Which raises the question: Did anyone here break the law by posting heavily censored underage nudity on TikTok? Eric Goldman, a professor at Santa Clara University specializing in internet law, says it’s largely up to the individual state. “Each state has different statutory definitions of lewd exhibitions,” he explains. “For example, the law might criminalize the ‘display’ of a man’s penis, but the law won’t be more specific if a translucent outline is a ‘display.’”

One common claim is that the filter is possible to remove, leaving the users exposed. After dancer Mikaila Murphy, 19, posted an #Invisible video where she drops her sweatpants, someone commented, “Who wants a tutorial on how to remove the filter?” Murphy then posted a followup video saying she wore leggings underneath her sweats.

Likewise, commenters told Tade Amato, 18, they planned to download his #Invisible video and somehow code out the filter to see him naked. He says he, too, got fully naked for the challenge, but he laughs off the threat of real exposure. There’s no evidence this filter-removal rumor is real or even possible. Still, “the thing people should keep in mind is that footage without the filter exists somewhere, which should be enough for people to be cautious,” a post-producer for a video editing company, who asked to remain anonymous, tells me.

While TikTok has now removed the filter, most of the videos are still up and searchable. Plus, the videos are now going viral on other platforms, and Taylor says “predators acting as girls” have since messaged him on Snapchat, asking for his nudes to sell. A screenshot of his Instagram DMs shows that users messaged him phrases like “Heyy big dick” and “Duuude, you’re huge.” 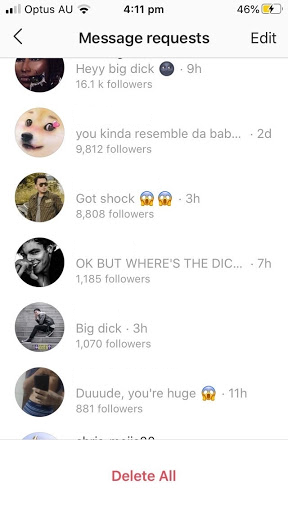 “Can’t blame them if they don’t know my age,” Taylor says. Still, he’s now more concerned about his safety as a minor now sexualized online. “I just gotta be safe in what I do online, I guess,” he says. He calls what he did “illegal, but at the same time, the filter is on — there’s no proof I’ve posted a nude video or photo.”

In fact, he doesn’t really regret posting at all. “Someone mentioned that it beats the Asian stereotypes [about penis size],” he laughs, “which I guess is a good thing.”