How Diapers Became an Icon of Modern Political Discourse

There's more to the meme than conservative groups protesting in Depends. In this day and age, we're all a mewling bunch of stubborn, shameless, self-soiling infants

Disposable diapers: a modern marvel, but environmentally controversial. American children soil around 20 billion of them every year. The market for adult diapers is surging as well. However wasteful they may be, we’re stuck with them for now — there’s just no better solution, it seems. And online, they’ve become essential to the discourse.

If you (like so many once-promising individuals) choose to poison yourself with politicized social media, you have no doubt seen someone accused of wearing a diaper, filling a diaper or needing their diaper changed.

The insult has been applicable for years, but it wasn’t until October 2017 (a few weeks after comedian Joe Mande represented Sen. Bill Cassidy as diaper-dependent, which is even funnier when you remember Cassidy is a gastroenterologist) that diapers securely attached their sticky tabs to our culture war. This was the month of a campus protest that epitomized the perils of “triggering libs” at any cost: At Kent State, Turning Point USA, a conservative youth group, held a poorly attended demonstration against “safe spaces,” with at least one participant clad in a diaper.

The unanimous and sustained mockery that met this display was significant enough to trigger massive unrest within TPUSA, whose official accounts and 25-year-old founder, Charlie Kirk, have been besieged with diaper jokes ever since. (One memorable nickname for the group’s young leader is Pampers Goebbels.)

Additionally, TPUSA is sometimes alleged to stand for “Toilet Paper USA” — somewhat in direct contrast to the diaper gag, though I’m sure that’s little comfort to them. 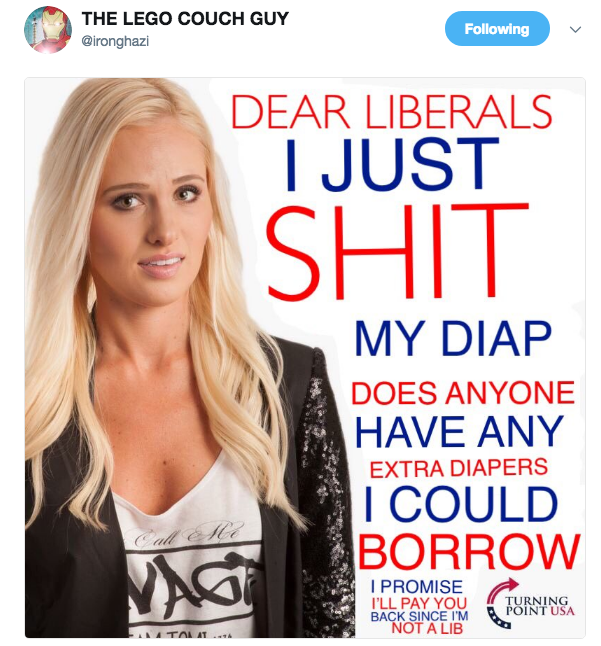 Clearly, diapers have resonance beyond the stupidity of the stunt. They suggest immaturity, for one thing, but the choice to hang out pantless, wearing a diaper in public, gifted us a transcendent image of situational blindness — the ultimate self-own. Dressing like a giant baby to make the point that your opponents are giant babies is spiritually akin to shitting yourself and sitting in it. There is no one else to blame for your bad take, dumb rhetoric or hot diarrhea, because it came out of you. The metaphor extends up to the president, often thwarted by messes of his own making.

But if the dirtbag left was increasingly bullish on the diaper meme following the TPUSA meltdown, it may have had something to do with Weird Twitter’s established affinity for the topic. The genre’s prophetic grandmaster, @dril, can take substantial credit for this — his prolific diaper output dates back to 2010, and seven pages of his print anthology are devoted to diaper content. In his strain of surrealist humor, the diaper is synonymous with the slothful, unhygienic lifestyle of the full-time troll. At the same time, he appears to worship the diaper as a consumer product; it signifies luxury and convenience, a kind of armor in some battle between the hyperfocused mind and the failing body where it resides. (Think of former NASA astronaut Lisa Nowak, who was alleged to have worn diapers during a 900-mile drive from Houston to Orlando with the intent to kill a romantic rival in 2007.) A terminally online character needs a diaper so they don’t waste valuable seconds traveling to and from the toilet, a primitive device.

It also happens to elevate his shitposts to their meta zenith: a realm of actual shit.

For all that the far right has done to cement its association with diapers, they still retain the apolitical gross-out energy that @dril identifies. Yes, Target did fire a neo-Nazi employee for slipping laminated cards that declared “IT’S OK TO BE WHITE” — the flip side listed white supremacist websites — into packages of disposable diapers, where parents were horrified to find them. Sometimes, though, we’re just laughing with a guy demanding that Nintendo retweet his fan art of Toad from Mario in a diaper. Or we’re fascinated by the very real, and apparently misunderstood, diaper fetish community. Perhaps we’ve stumbled across a 4chan comic strip where a nude, mustachioed man, in the light of a full moon, transforms into a diaper. That’s right: He’s a werediaper. 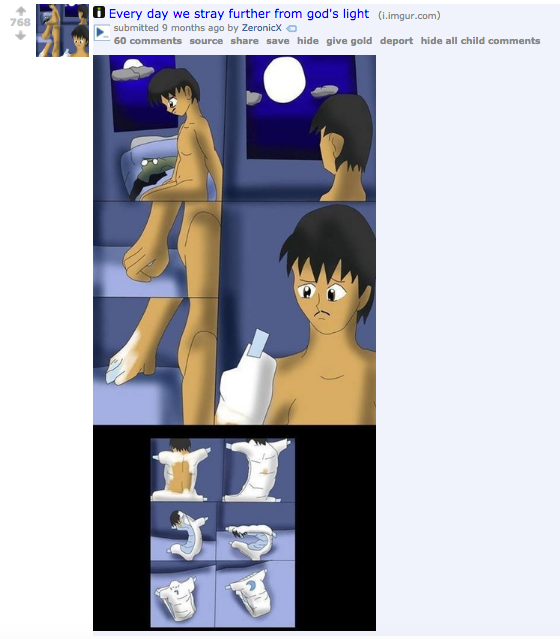 And since internet apoplexy is hardly limited to conservatives, anyone might be credibly accused of “diaping up” — if they haven’t already explicitly endorsed it, like when Fox News’ Laura Ingraham advised fellow cisgender folks to wear diapers to avoid sharing restrooms with trans people.

As the jokes pile on, the diaper becomes a universal symbol of self-mockery. Fans diap up when angrily stanning Taylor Swift. Twitter power users may diap each other for fun. We’re all of us a mewling bunch of stubborn, shameless, self-soiling infants. As long as you’re fuming mad — or simply overexcited — you risk losing control of your bladder and sphincter, so you know what? A diaper couldn’t hurt. Don’t be embarrassed. Seriously, you’ll thank me later.

And if you’re going out, grab me some diaps too? Don’t forget my brand. I like Huggies.