Accounts vary as to what Sly allegedly said and when, but as the rumor mill has grown over the years, so has the impact of his sexy instructions

If you’re unfamiliar with the story of Sylvester Stallone’s hot mic, you’re in for a treat. According to the still-unverified, could-be-utter-bullshit urban legend, Stallone took a young lady — either an extra or a production assistant — back to his trailer during an undated film shoot in Vancouver, but he neglected to turn off the microphone he had wired to him when he went inside. As a result, the entire crew could hear what was going on, and what they allegedly heard was Stallone instructing the woman to “cradle the balls” and “stroke the shaft.”

Over the past week, I’ve taken a deep dive down the internet rabbit hole of Stallone’s balls in an effort to figure out exactly what happened in the trailer that day. Only, instead of piecing together a single narrative, I’ve discovered that there are a multitude of different versions of the story — a testicular multiverse! — all with their own twists and turns. I’ve tried to nail down which movie set it happened on, yet every promising lead ended up pointing me in another direction. I even tried to get firsthand accounts, but that resulted in confusing stories and angry emails.

Still, I never gave up. I was inspired by the famous speech Rocky gives to his son in Rocky Balboa, where he says, “It ain’t how hard you hit. It’s about how hard you can get hit, and keep moving forward. How much you can take, and keep moving forward. That’s how winning is done.” And though I imagine Stallone would like to break me in half for looking into this notorious urban legend, I’d also like to think that Rocky Balboa would be proud of just how relentless I was.

When I first began looking into this story, I tried to sort out all different variations of the tale. Some versions of the story say that Stallone told the woman to “cradle the balls” or “cradle my balls,” whereas other versions say that he instructed her to “cup” his balls as opposed to cradling them. There are also variations on what he told her to do with his shaft, including instructions to “work the shaft,” “lick the shaft” and “stroke the shaft.” Then there are versions where he also instructed her to “say my name” and/or “slap my butt.” I even ended up with a firsthand account from a First Blood crew member who told me that he heard Stallone tell the woman to “hum the theme from Rocky” while blowing him, but I’ll get to that later.

After documenting all of the different versions of Stallone’s supposed quote, I tried my best to figure out just how old the rumor is, but that proved inconclusive. The earliest reference I could identify was from 2002 in a book of Hollywood rumors that said the event happened on the set of Judge Dredd in 1995. Also, in a 2006 blog post by a cartoonist, the author writes that he heard the story in the 1990s, and that he later shared it with someone who relayed it to comic book writer Garth Ennis. Later, Ennis would reference the story in a 1998 issue of Preacher. 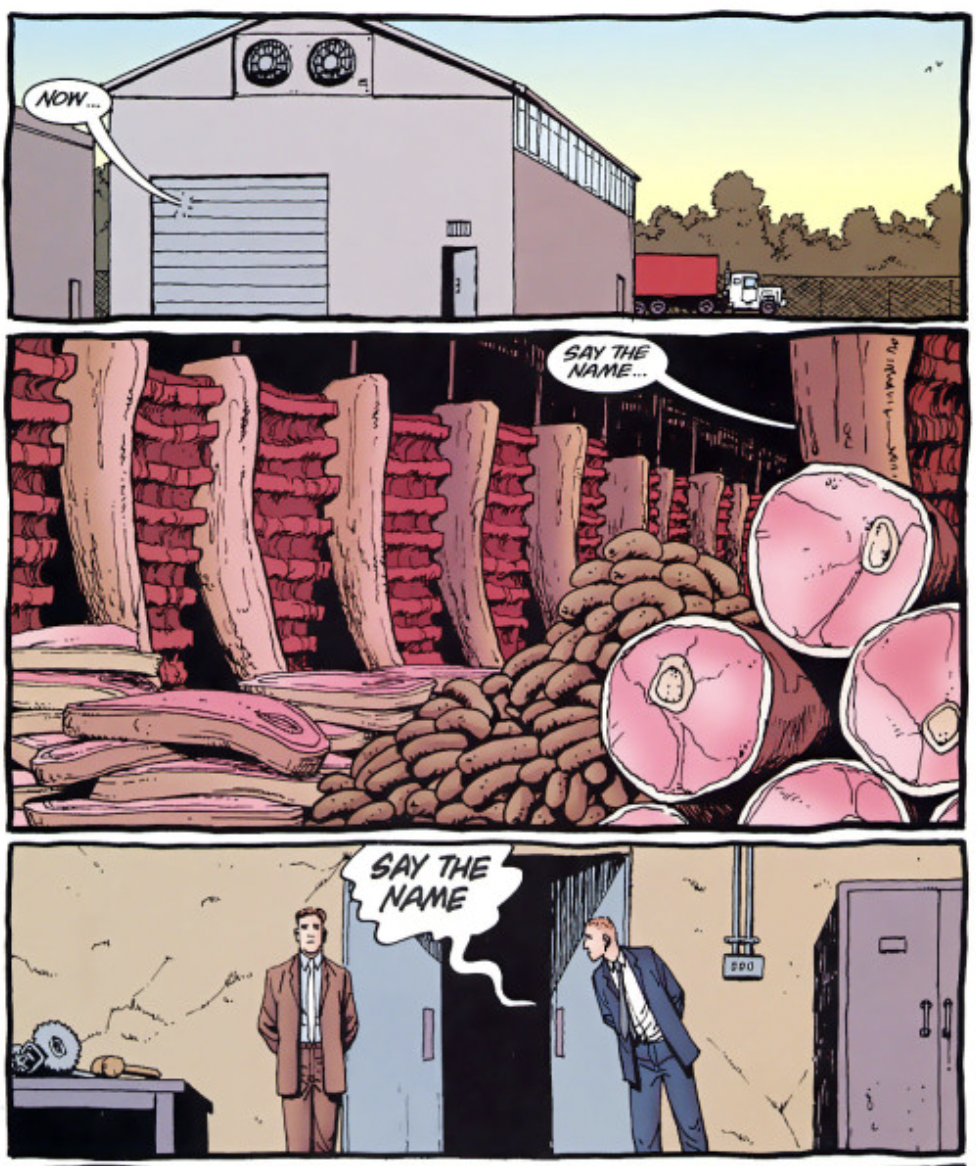 Both of these versions point to this event happening in the 1990s, but I also spoke with a writer who interviewed Stallone around that time. He, like everyone else I spoke to, asked to remain anonymous. He did tell me, however, that he believed it happened at least a decade prior to his interview, though he didn’t specify why. I also spoke with someone from the set of the 1995 film Assassins who told me it happened years before that movie. Interestingly enough, that crew member said that the late director Richard Donner addressed this rumor on set, telling his crewmembers, “You motherfuckers, I don’t want to hear any of that fucking shit on the set!”

So, it seems to have happened somewhere in the 1980s or 1990s, which hardly narrows things down as Stallone made 30 films in those two decades. I tried next to figure out which movie set it happened on, but that proved even more challenging. While I already mentioned Judge Dredd, the other movies discussed most in the online rumor mill are Cliffhanger, Assassins and Demolition Man, all of which are from the mid-1990s.

Here’s the problem though: None of these movies were filmed in Vancouver and that detail is a prominent part of the alleged story. For example, in the Urban Dictionary entry for “stroke the shaft, cup the balls,” it lists the event having occurred in Vancouver, and that the story became so well known in the local film community there that it was used to remind people to be aware of what they were saying when they were mic’d up. When I spoke to a guy in the Vancouver film scene about this, he did say that he’d heard the expression, but it wasn’t common on the sets he’d been on. Regardless, Vancouver is often linked with the story.

The only Stallone movies filmed in Vancouver are Rocky IV and First Blood, but I seriously doubt that it happened on either of these film sets. Why? Well, I figure that if it happened during the production of one of his biggest movies, the film it came from would be a more relevant part of the story. For example, if it happened on Rocky IV, I’d imagine that the rumor online would frequently begin with, “On the set of Rocky IV…” Yet, most versions link it to one of Stallone’s lesser films from the 1990s (for the record, I love Demolition Man, but you get what I’m saying).

Still, the Vancouver detail is so widespread that it factored into the next phase of my pursuit — trying to get a firsthand account of the story. Using IMDbPro, I cold-called, emailed and DM’d dozens of crew members who worked on the sets of the most oft-cited movies for this rumor. All told, I probably reached out to about 50 or 60 people. Only about 10 got back to me, and some of them weren’t very happy with my inquiry.

“Dude, look elsewhere for your trash. Not ME,” wrote one crewmember from Assassins (another person from that movie called me a “troll”). A handful of other people offered polite replies, but didn’t have any details on the matter. Another crew member from Assassins did tell me the foul-mouthed Donner story I mentioned above, but he said it didn’t happen on that set, which was very disappointing since I’d found a convincing blog post that suggested otherwise.

Whether or not there was a recording of the incident is another variation of the rumor, but I seriously doubt that any such thing exists. We’ve got endless amounts of celebrity sex tapes, we’ve got the great Orson Welles drunk out of his mind on the set of a wine commercial and we’ve got a picture of Marlon Brando giving a blow job, so if there was a tape of Stallone giving ball-cradling instructions, I think someone would have found it by now.

Similarly, there’s another version of the story that says that after this incident occurred, the entire crew had T-shirts made that said “cup the balls” or “slap my butt.” But this is also highly suspect. For one, like the tape, it presents the idea that some sort of physical evidence exists from this incident, yet no trace of it exists online. The other reason why the T-shirt detail makes no sense is because you’d have to imagine that anyone wearing such a shirt would be fired, especially when you consider the fact that many people found Stallone to be a very unpleasant dude back in those days. As such, it’s highly unlikely he would have had a sense of humor about what had happened.

I was about to call it a day when I got an email from a guy who worked on First Blood, which was indeed filmed in Vancouver. In my email, I’d referred to the Stallone story as an “urban legend” and in this man’s reply, he cryptically said, “Brian, not legend, fact.” This was the biggest lead I’d had, so, after a few more emails, we arranged to speak. But when the time finally came, I was bitterly disappointed.

The guy was super nice, so I hate to be an asshole here, but I spent more than 90 minutes on the phone with him as he went through his 40-plus-year history in show business. Every time I tried to redirect things, he quickly got on another tangent about race cars, Katharine Hepburn, resting heart rates and about a dozen other topics unrelated to First Blood.

Over the course of this conversation though, he dropped a piece of information here and there about what I wanted to know. According to him, this event did happen on the set of First Blood, specifically just before the scene in the tunnel with the rats. He even said that he heard Stallone himself, but he didn’t hear “cup my balls” or “cradle my balls.” Instead, he heard, “Hum the theme to Rocky.”

At first, I thought this whole meandering conversation had actually been worth it, but when I asked for specifics, things fell apart. The man was sure it happened on the day of the rat scene, but it turned out he hadn’t heard it personally after all. Rather, he’d heard some of the teamsters on the set talking about a party in Stallone’s trailer with several women. Also, he said that he saw a communication between the sound mixer and boom operator about a mic having been left on, but he didn’t hear anything about what was caught on the mic.

As for him hearing it personally, the First Blood crew member clarified that he heard a tape of the incident years later from a friend. Later on, the crew member “put it together” that it must have happened on that particular day of First Blood. As for where the recording came from? He said a surveillance truck that he remembered seeing near the set was the likely culprit.

So, yeah, that was enough for me to finally give up. There was no fucking way I was ever going to get to the bottom of this and I was pissed as fuck about my inconclusive results and my wasted time. But then, as a true Rocky fan, I decided to look at it another way. Rocky — particularly the first film — isn’t a story about winning, it’s a story about going the distance. Yeah, Rocky lost to Apollo Creed, but he gave it all he had. As for me, I was defeated by a 70-something dolly operator who spared no details about his breathing exercises. Did I win? No, but I sure as shit went the distance.