Every Theory About the Three Seashells in ‘Demolition Man,’ Judged by the Guy Who Wrote the Movie

Sylvester Stallone’s take is easily the most disgusting

For almost 30 years now, screenwriter Daniel Waters has been asked the same question over and over again. Along with that, he’s had to entertain a wide array of gruesome theories about feces and urine that come at him from the most unexpected of people. Waters was the screenwriter on a variety of films that we’re all familiar with — from Batman Returns to Heathers — yet the movie he’s received all these queries about is the 1993 Sylvester Stallone action comedy Demolition Man, which briefly features three very mysterious seashells.

If you’re brushing up your Stallone movies right now, Demolition Man is the one where Sly is a cop who gets cryogenically frozen in the 1990s, only to wake up in the brave new world of 2032. Things are way different in the future — sex is obsolete, cursing is outlawed, Arnold Schwarzenegger has been president and Taco Bell has replaced every other restaurant — but the most perplexing change has to do with how things are done in the bathroom. Instead of using toilet paper in the future, people make use of three metallic-looking seashells that sit right beside the toilet.

How they work is never answered in the movie, which has led to a wide variety of theories on the matter, put forth by everyone from the film’s stars to diagram-drawing fans online. Waters has heard quite a few of them over the years, but, for the first time, he’s addressing all of the seashell theories — no matter how detailed — in an effort to finally put the subject to rest.

To get things started, we begin with the method offered by no less than Mr. Sylvester Stallone himself.

In 2006, Stallone was asked about the three seashells in an interview with Ain’t It Cool News. In it, Stallone had this to say: “Okay, this may be bordering on the grotesque, but the way it was explained to me by the writer is you hold two seashells like chopsticks, pull gently and scrape what’s left with the third.”

Waters: I don’t think I told him that — no, that’s not true. That idea is way too feces-specific. We have many goals for our future, but less interaction with the feces is probably a good goal to have. I also don’t know why you’d have to pull anything out. I mean, with two good cups of coffee, you wouldn’t be able to “grab” anything.

The seashells also can’t be disposable. That’s the anathema of the future — that doesn’t seem futuristic.

On the red carpet for 2013’s Gravity, MTV News’ Josh Horowitz asked Bullock about the seashells, and she said, “Well, think of a bidet, right? There’s several processes. You have number one, you have number two, and then the cleanup.” This theory has since been fleshed out on Reddit, with an astonishing amount of detail. 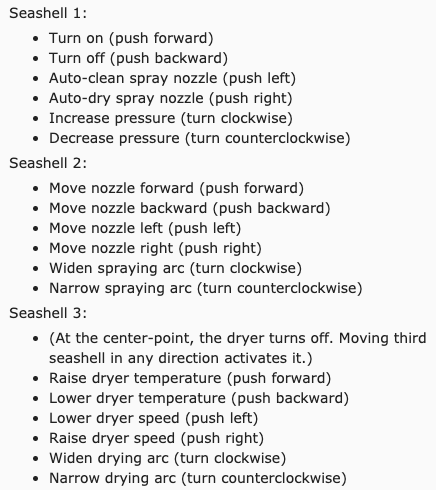 Waters: I like the bidet element — that makes a lot of sense.

“The three seashells is a type of toilet paper. You open it up, and the toilet paper comes out,” said Schneider in 2019. This theory, as YouTube commenters pointed out, directly contradicts what Bullock’s character said in the movie — that people used to use wads of paper. So, it’s safe to say this theory isn’t correct, which is exactly what Waters says.

Waters: That’s terrible! How dare he say that? That’s cheating! It’s one of the finer jokes of the movie where Stallone gets the paper by cussing into the machine. Oh Schneider.

Even more detailed than the expanded bidet theory is the soundwave theory, created by a cartoonist named Mason “Tailsteak” Williams. Broadly speaking, this idea stated that, because the seashells are shaped like parabolic reflectors (i.e., a satellite dish) they must use soundwaves to remove waste from your asshole area. By positioning one seashell, standing up, on each side of you, the third seashell is pointed at you from the front to be moved slightly from side-to-side. Wherever the three signals intersect, that would create enough of a vibration to shake off any shit you may have back there. 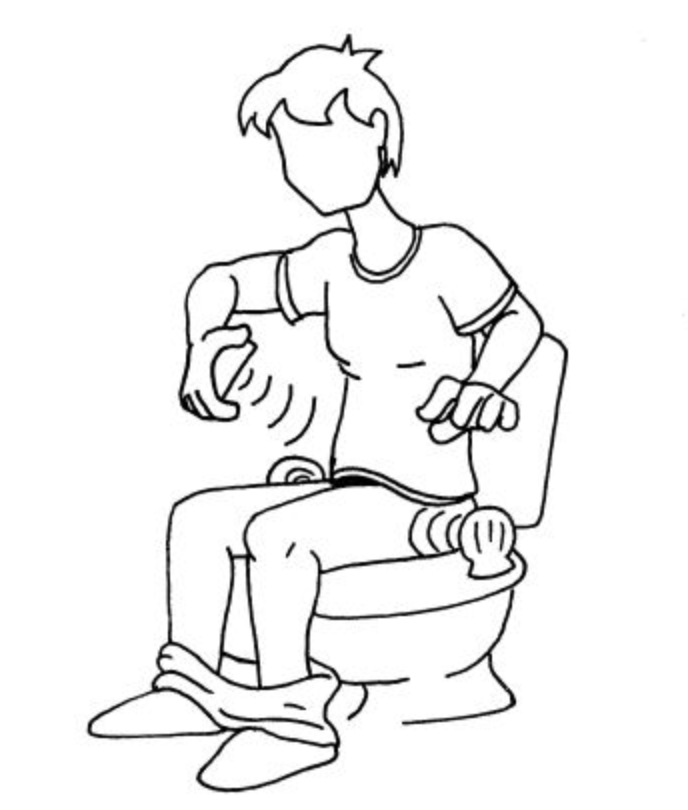 Waters: I love that. I eventually came around to the idea that the seashells just look like seashells but they really do crazy, futuristic kind of laser shit, so that’s kind of similar. Again, the less contact with the feces, I’m all for it.

In an interview for Vulture just last year, Waters related the following story: “I was doing jury duty, and this bailiff comes up to me after we’re dismissed, and she’s like, ‘I have a theory for the three seashells,’ and goes into this elaborate thing about how you use one seashell to pinch apart your bottom, the other seashell to pull out the excrement, and then the third seashell has a hose that washes off the remains. I’m like, ‘Sure. Does this mean I’m out of jury duty?’”

Waters: Oh! My friend came up with that one. He thought that up and very seriously ran it by me one day. In reality, I did have jury duty one time, and after revealing what I’d written to the judge, a bailiff asked me to tell her how the seashells worked. I guess in the name of ‘print the legend’ kind of interviewing, I combined the two stories, which is something I’d definitely do (especially since a bailiff telling me that is a better story).

Anyway, it’s a well thought out theory and seems futuristic to me, so it’s a good one.

Waters: No. By that time in the future, you’d have seven seashells for each kind of genitalia, so, no.

The “No One Poops in the Future” Theory

In 2018, a writer at Ultimate Action Movies suggested that future people simply don’t poop. After all, sex no longer exists, so this isn’t entirely without merit.

Waters: I’ve not heard that. I think that’s cheating.

Finally, one theory says that the three seashells is simply a hazing ritual for everyone who gets thawed out from a cryogenic freeze.

So, What’s the Real Story Behind the Three Seashells?

Waters: Well, I had a very limited time to write Demolition Man — I only worked on it for two-and-a-half weeks, and I changed it from being a pretty straight-ahead action movie to what it is now. You can blame me or credit me for that, but I added way too many tones to it and kind of made it a comedy.

At one point when I was writing it, I had to wait 20 hours in line for one of Johnny Carson’s last shows, so I brought all my index cards and my notepads and did a lot of writing there. I was mapping out more “future stuff” so I called my best friend, fellow screenwriter Larry Karaszewski, and asked him to give me some funny future shit. So he’s like, “I don’t know man, can I call you back? I’m going to the bathroom.” So I go, “Bathroom, perfect! What can we do with the bathroom?” Then he said, “I don’t know, can I just finish up?” And I told him “No” and made him think of something. He said, “Well, my wife keeps a bag of seashells next to the toilet,” and I said, “Okay, I can work with that, goodbye!”

So I turned that into three seashells, and since then, people have always asked me how the three seashells work, but I never came up with anything. I thought it was better for other people to make it up because I don’t have an answer. I just put it in the script and let people’s imaginations run wild.

That said, if there is a sequel made — as Stallone recently said there would be — you’d have to reveal it in the sequel. I haven’t been called for the sequel, but I do have the teaser for it. You’re sitting in the movie theater, and Stallone, with his future cop outfit, walks into a bathroom and opens the door. We see the three seashells and he turns to the audience, smiles and shuts the door. Then “Demolition Man 2 — Summer everywhere.” That’s it, baby.