‘As a huge ‘Star Wars’ fan, I feel unsurprisingly icky after answering these questions. The idea of grilling up some poor Porg is only slightly offset by finally silencing that damned Jar Jar.’

Within the Star Wars universe exists a vast ecosystem of different species, creatures and humanoids. And yet, most Star Wars fans probably couldn’t name what exactly their favorite characters eat — besides maybe various soups, alien milk and whatever that vase of meatballs was during Darth Vader’s dinner party.

Which is the nicest way I could think of to introduce the following question: Do Star Wars characters eat each other? And maybe more to the point, how sentient is too sentient to chow down on? For example, in the latest episode of The Mandalorian, we see locals preparing to eat a Kowakian monkey-lizard — the same species as the infamous Salacious B. Crumb.

They (and I), however, are culinary novices. For a professional opinion, then, I forced a couple professional chefs to ditch whatever Star Wars ethics they have and whip up some Wookiee stew.

The first creature that came to mind for both was the Porg. It isn’t without precedent. After all, we see Chewbacca spinning one on a spit in The Last Jedi. “These sea-dwelling birds are as cute as they would be tasty,” says Jim Mumford, a chef and food blogger at Jim Cooks Food Good. “While we know very little about these birds, their short stature and small wings akin them to turkeys, culinarily speaking. Wild and gamey, a Porg would be best suited for a smoked application, served along a tart boysenberry sauce.”

Not to be outdone, Catherine Barson Eastis from The Gluttonous Geek has actually made a “Porg-ish” game-hen recipe. But she argues that Porgs probably don’t taste that good in reality. Despite how delicious their big, watery eyes look, she explains, marine birds such as these little guys “tend to taste a bit on the fishy side.” 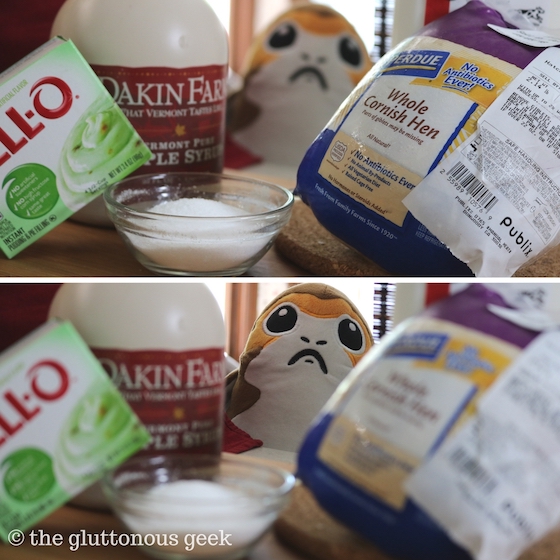 “But if you soak the meat in some green Thala-siren milk,” she adds, “its casein proteins will remove a lot of that fishiness and tenderize it at the same time!”

“The best-tasting creatures would likely include Nerfs and Banthas for their delicious slow-twitch muscle fibers,” Eastis explains. “They’re essentially space cows. Bantha might have a more goat-like flavor, though, due to their foul-smelling food.”

Mumford, meanwhile, argues that the Tauntaun would likely provide a tasty treat. “Don’t let the classification of snow lizard fool you,” he says. “When I see a Tauntaun, I think of winter goats. These are work animals, and they can grow big enough to fit a Jedi inside!” As such, he reasons they could make for some real tasty burgers: “full-bodied and fatty, perhaps topped with extra bleu cheese and paired with Hoth’s best cream ale.”

Screw It, Bring On the Sentient Sustenance

“As far as sentient characters are concerned, Bossk the reptilian Trandoshan bounty hunter would probably taste like chicken or alligator,” Eastis says of the “bipedal reptilian sentient humanoid.” “I imagine he’d be delectable when grilled tandoori-style and stewed in a creamy curry.”

Trandoshans like Bossk also enjoy hunting and eating our dear Wookiees, but Eastis says our furry friends might not taste as good to non-reptilians. “Depending on [the Wookiees’] diet and lifestyle, you could get a dog flavor, which is supposed to taste like a mix of lamb and beef,” she explains. “Or you could get a giant greasy mouthful of stringy bear meat ruining your day.”

(Notably, the Trandoshans themselves fried up Mon Calamari calamari, which would probably be seen as equally barbaric in our world, but that’s assuming they don’t catch onto the “bath” you prepared for them getting hotter and hotter.)

As for the cutest creature in the Star Wars universe — Ewoks — they’re definitely still on the menu. In fact, Ewok jerky is just one known way to fry up the little furballs. Mumford alone can think of many others (he likens them to the Star Wars version of veal), including “Ewok milanese, topped with a Porg egg — that’d make a nice meal following a rebellion.”

And while Eastis argues that the worst-tasting Star Wars character would be the “silicon-based mynocks and space slugs” — especially due to potential radiation exposure — she doesn’t rank Jar Jar Binks very high above them. “Amphibians tend to taste like fishy chicken, and snacking on a strong swimmer like Jar Jar would be like gnawing on a dog toy,” she says. “That said, the Gungans’ cartilage-based skeleton would boil down into a perfect bone broth. Just try not to barf when you see their disembodied legs twitching in the pot!”

Barf-inducing or not, it’s a win in Mumford’s book. “Jar Jar probably wouldn’t be too tasty,” he says, “but anything to shut him up.”