What She Means When She Says She’s Missing Your Dick

Yeah, it's a thing. Cardi B made it clear in a recent Instagram Live

Once I got an email from an ex-fling that said: “So sweet of you to post this.” Included was a Craigslist Missed Connections link that read: “BG: I still miss your dick.” Those were his initials, and I knew the purpose of his email: He was just trying to feel out if I might still want up on that. I didn’t, nor had I posted the missed connection, but it forced me to admit that I did miss that dick. It was a hog, and although he didn’t do much with it, it felt amazing to get on. I wouldn’t tell him that, though, because the person attached to that dick was a dick, and it was best left floating around in the ambiguous ether of the past. 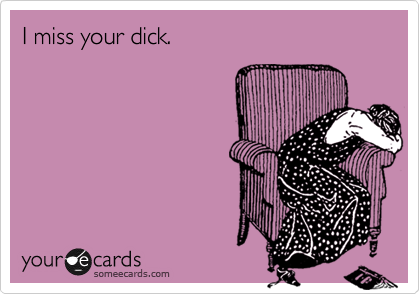 That’s generally how it goes when you miss a D. It implies that the sex is crazy-hot but the relationship was crazy-toxic, and so you can pine for the dick but not the destructive aspects of the relationship itself, even though they are often inextricable.

Recently, Cardi B pulled the curtain back on this when she admitted in an Instagram Live post that she misses her husband Offset’s dick.

Complicating matters is she said they’re splitting up earlier this month, but Offset says he still misses her and has clearly been on some sort of win-back campaign, swearing he didn’t cheat and saying he wants back in, including spelling out “TAKE ME BACK CARDI” in flowers onstage in the middle of her recent set in Los Angeles.

Now she’s lamenting the lack of dick in her life. “My gag reflexes are leaving cause I haven’t sucked dick in such a long time,” she says. “I miss the D. I’m about to relapse and call this n****.”

“Big, fat, black…” she pauses, and then sips on her coffee. “And heavy. I miss it. A lot. I want it. In my throat. Inside of me. Demolishing me. Destroying me. Oh, shit, I need more coffee.”

I can’t tell you what it all actually means for those two. Some people are speculating the whole will-they-or-won’t-they-split thing is just a publicity stunt. But what I can tell you is that for mere mortals, missing that dick is just as real.

The reason it’s so real is because regular unmemorable dick is actually so pervasive. As the wise philosopher queen (and MEL contributor) Maddie Holden put it, “Dick is abundant and low-value.” Dick is everywhere, easy to get and mostly unremarkable, aside from its ability to insert and thrust. Yes, sometimes you really need insertion and thrusting, but that part is a dime a dozen.

For that reason alone, it takes a helluva lot for a dick to stand out that much, especially when it’s gone and there’s plenty more eager to take its place. But when it does, oh, how it does. To merit such wanting, the dick has to be scarce and premium enough to linger in the mind, to be the tea and madeleines of the dick literature, the kind of dick you’d clone if you could just to hang on to it without the him. Premium is subjective of course: It could be premium size, premium skill or premium sentiment, meaning it just so happens to be attached to the one that got away or the one that could never be.

All that matters is that, like true love, great dick (love or not) only comes along so often in a lifetime. Women never forget it, even if they only remember through regret-tinted glasses.

Great Sex Dick, but You Suck

You might be a tiger in the sack, but you’re a cad in real life. The dick may or may not be huge. It could just be what you do with it that left the indelible mark, the one she’ll never forget, the one she can’t let go of. Dick Too Bomb is a real phenomenon, but that’s for the ones you can’t cut loose. This dick is obviously now in the rearview, because it had to be. Possible reasons: Whatever you are outside of bed is just too intolerable, whether it’s incompatibility or dishonesty or just nothing good for anybody but a hot fuck. This ruins all chances of a reunion tour. The reason for your suckitude could also be that you don’t want the relationship she does, so she misses all of you, dick included, except the part where you broke her heart.

Sometimes a woman is tempted to try to work it out with you so she can have that dick again, but she always regrets that, too. And that’s why people tell that woman things like, “Don’t worry! There are plenty of amazing dicks out there! You’ll find one attached to a person you can tolerate someday!”

If that were true, she wouldn’t be missing you.

Great Big Dick, but You Suck

Some dick is only big, but still phenomenal. As MEL Deputy Editor Alana Levinson told me, “Sometimes the sheer enormity is a sight to behold, like Mount Rushmore.” That was the case in my earlier example: giant but not skilled, but that didn’t matter. Because it was so uniquely large, and got so hard it touched parts I didn’t even realize could got touched, and the experience of it in and of itself was memorable. But not enough to keep going back, because the dude was a smarmy jerk.

Many women miss dicks this way. When women talk about the dicks they miss, just the dick, they wax poetic about how beautiful the dicks are, how the size is just right, how they are pink and plush and hard as concrete. As we’ve told you before, women don’t remember all the dicks, but the ones that stand out are unforgettable.

Not Big Dick, but She Loved You

As Amanda Mull so eloquently laid out, boyfriend dick is an ideal state of dickdom that women have great affection for because they can take that dick every day of their life. If it’s attached to a great boyfriend, you often miss the ease and convenience of a functional, pleasing dick you have access to at nearly all times of day and night. This is a dick you don’t have to get all gussied up for, because the man attached to it loves you just as you are. You care about this dick. Maybe it didn’t work out, but you still have fond memories of your times together with that dick, because everything else attached to it is so comforting and pure.

There may be more types of missed dicks, but these should cover most of the bases.

The real question is what are you, a man, supposed to do about it? How do you know if you’re a missed dick? What does it mean if you are?

I suppose you, like my former D, could go around asking women if they miss that D, but I don’t recommend it: It didn’t get him any action. Some men incorrectly took Cardi B’s lament as confirmation she’ll be fucking her man again. I can’t speculate, but let me caution normal, non-celebrity men that even if a woman announces that she misses that D, you should not go instantly popping boners beneath her windowsill (metaphorically). Just don’t assume anything, even if you get missed-dick status confirmation.

Missing the D is an extremely flattering admission, but it doesn’t automatically mean she’s going to get back up on it and fuck her life up. Missed dicks are past dicks for a reason, and the reason is that it was bad-news dick. It’s the memory she’s pining for, not reality. Unless, of course, it is. And if that’s the case, and she wants a do-over, believe me: You’ll know.