If You’re Not Cringing at Your Past, Have You Actually Grown Up?

Shame is healthy for your personal growth — but embarrassment is healthier. So how much cringe do you need to move forward?

My favorite story I make my friend tell me at least three times a year is about the time just out of college she met a guy at a Chicago bar, who wouldn’t shut up about Dave Matthews Band, but was hot so she got his number anyways. She texted him throughout, but he never asked her out. Instead of taking the hint, my gal pal bought tickets to an upcoming DMB concert and lied about winning them from a radio station. He accepted what she now describes as a desperate invite, but called her out on having print-out tickets when radio stations tend to leave winner tickets at will call. He obliged to a pity makeout session on the lawn anyways, and they never spoke again.

Despite having a sense of humor about shooting her shot in the most passive-aggressive way possible, she cringes every time I make her retell the story 10 years later. That cringe feeling is what experts refer to as shame, an emotion related to a negative evaluation of yourself and your worth, usually after acting in a way that doesn’t align with your values. Whether you drop $150 to see a band you don’t even like in an elaborate lie for someone who’s obviously not into you, or lash out at your partner in a disagreement, the hot and fresh shame served up with that can make anyone feel like a real piece of shit.

Shame has gained a bad reputation in recent years, and rightfully so, as it’s been linked with everything from depression and anxiety to substance abuse and many other issues. However, the attempt to get rid of shame completely threatens to remove these sign posts of personal growth and leave us with very little to look back on and laugh about. Likewise, shame stories help people connect and exercise compassion. And if social media is any indicator, many people are eager to share their cringiest moments as a way to feel less alone and cope.

But if shame can be useful, the question then becomes, is there a healthy amount of cringe we should have about our past selves? And if so, what’s the right degree of recoil to make sure we’re moving forward? 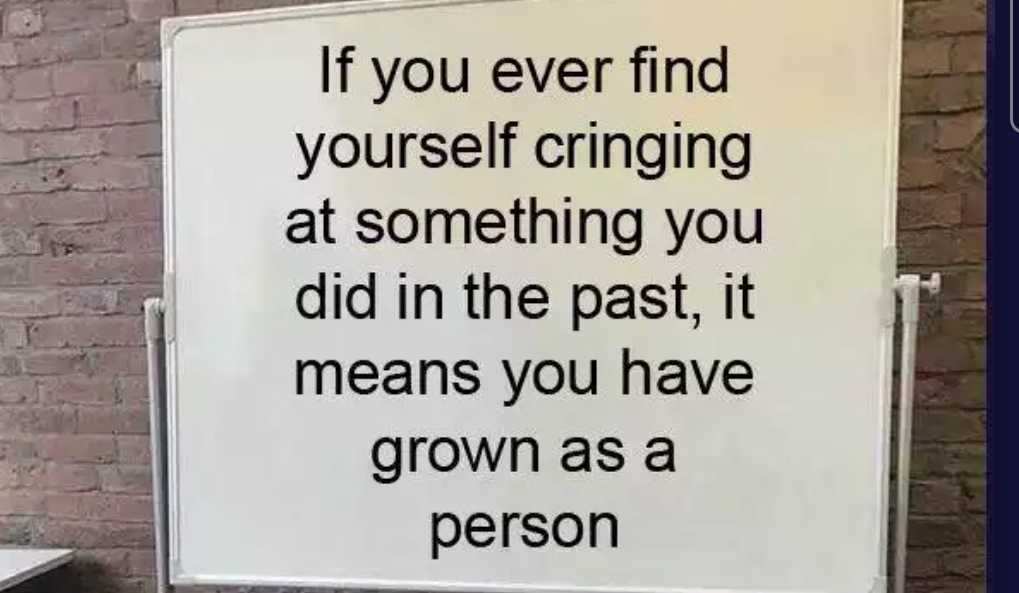 To Bognar, the answer has less to do with the right dosage of shame and more to do with its half-life. “The bummer of it is that often we learn that lesson, but the shame persists afterward anyway,” he says. In other words, people are typically pretty good at feeling shame, but terrible at letting it go, and men are especially bad at it. “Men are often raised not to develop a few important resiliency skills, and one of them is the vocabulary and self-awareness to name their own feelings,” Bognar says. Consequently, when men feel shame, it’s harder to name that and easier to turn it into anger or rage. So the shame lingers and can curdle into something far more toxic than a funny fuck-up to tell your buddies about.

Regardless, talking about your own cringe-worthy moments with friends is crucial, and having a sense of humor about the past helps convert shame into more palatable feelings like embarrassment — a more constructive and temporary response. “Embarrassment is the psyche’s way of keeping individuals within general social parameters and expectations,” clinical psychologist Carla Manly explains. These norms serve as guidelines for behavior, and when we go too far outside of that box, the end result tends to be cringe-worthy. Shame starts off this way, but the difference is that it sticks. “Shame affects the individual’s sense of self in a profound way and results in people feeling as if they — not their actions — are flawed or damaged at the very core.”

The best way to shift from shame to embarrassment is to think about how you’d respond to a friend in the same position. Most of the time, you’d likely tell them to let it go. “A lot of times, those of us who are prone to shame are far kinder and more understanding to the ones we love than toward ourselves,” Bognar notes.

It’s safe to say that my friend has achieved the right amount of cringe about the regrettable concert. She’s now a happily married mom who didn’t have to hatch any elaborate schemes to get there, and doesn’t think about this dude unless I’ve had enough wine to bring it up. And of course, if she wasn’t laughing every time she retold the story, I wouldn’t enjoy it enough to even bring it up.

“When we choose to view feelings such as embarrassment as learning opportunities — looking objectively at what we did that created the sense of embarrassment — we can then learn from the experience and act differently the next time around,” Manly says. “A growth-oriented mindset can shift cringe-worthy moments into self-improvement.”

So go off and cringe at your past self — just make sure you’re being nice to the current version, because it’s all you have to work with. Or as Dave Matthews Band put it in their hit (and insufferable) song Ants Marching:

Take these chances
Place them in a box until a quieter time
Lights down, you up and die

If that doesn’t make you cringe, nothing will.