How Would a Brachiosaurus Wear a Necktie? An Extremely Important Investigation

A paleontologist, a professional stylist, an artist and the dinosaur designer for Jim Henson’s ‘Dinosaurs’ sitcom were all willing to waste their time with this question

Some questions require an answer. Is pineapple a scientifically acceptable pizza topping? No. Do minions fuck? Yes. Is a corn dog a sandwich or popsicle? Neither, it’s a waffle. And to add to that great pantheon of questions is this viral query, which simply asks how a brachiosaurus would wear a necktie. 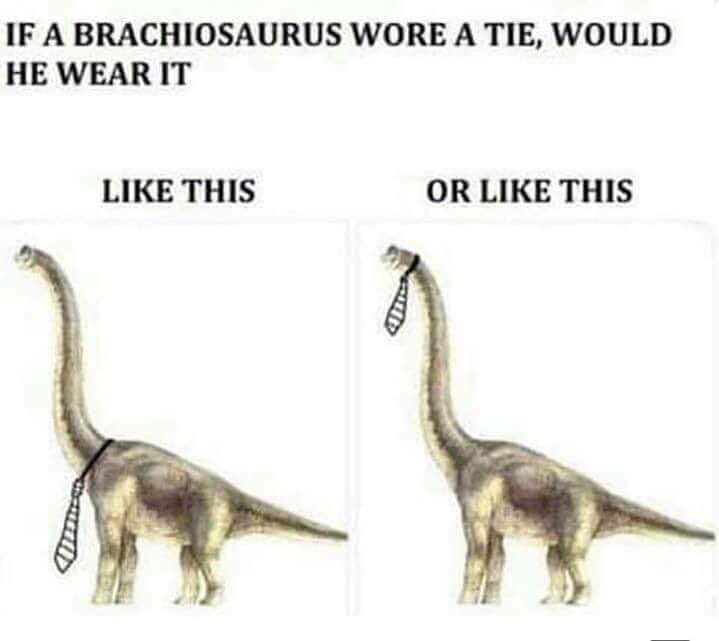 Personally, I think it goes at the bottom of the neck, but I can’t rely on mere opinion — I want scientific answers, so I decided to get some expert analysis on the matter. The first person I turned to was stylist Todd Hanshaw, who tells me, “In this picture, it’s too low when it’s low and it’s too high when it’s high.” The lower version, he says, was closer, but that the dinosaur “looked like a slob” with his tie that low.

While I get what he’s saying, this question really must be one or the other, much like the query of whether or not the Kool-Aid Man is the pitcher or the liquid (he’s the pitcher). So, with Hanshaw’s answer being inconclusive, I sought out someone who knows a bit more about dinosaurs: paleontologist David Evans, the senior curator in vertebrate paleontology at the Royal Ontario Museum.

Evans tells me, “Sauropods should wear their tie at the bottom of their long neck. Humans wear a necktie inside their shirt collar, which sits on top of the collar bone, at the junction between the neck and trunk. This corresponds to the bottom of the neck in a sauropod dinosaur.”

His answer is satisfying enough, but I still wanted confirmation from other stakeholders, so I decided to look for a children’s artist who had tackled this before. To my surprise, however, I had trouble finding any art that specifically put formal wear on long-necked dinosaurs. I found T-Rexes wearing just about everything, but dolled-up sauropods were scant. I did, however, find an adorable pair of brachiosaur cake toppers, which again put the tie at the bottom. 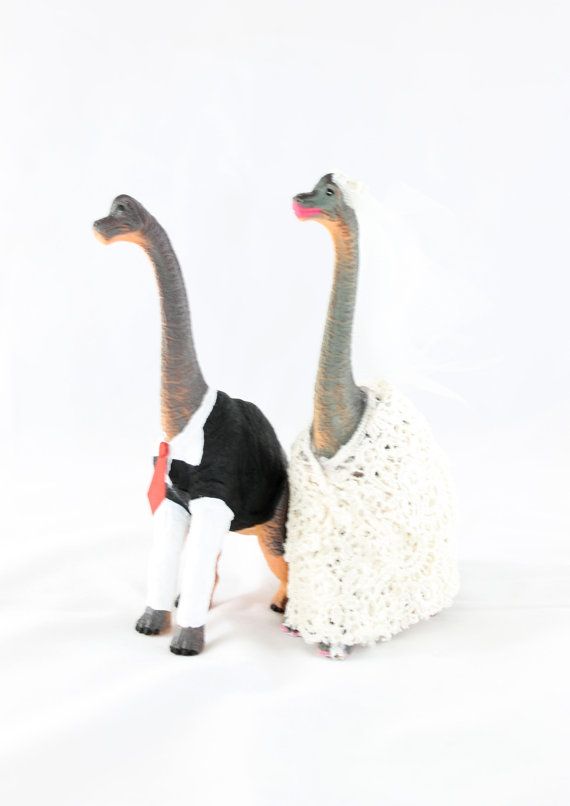 And I found this image by artist Andrea U, who runs an Etsy shop with lots of dinosaur drawings. 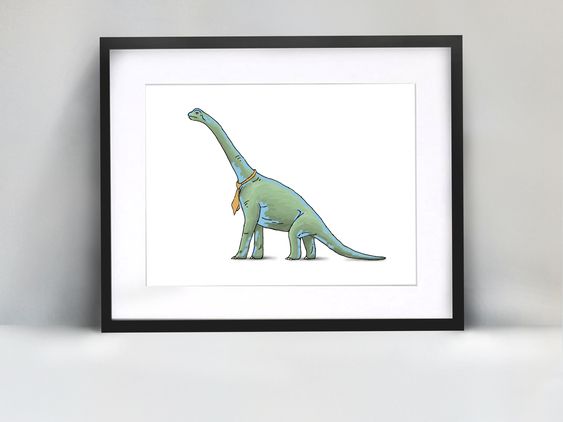 “I chose to put the necktie at the base of the brachiosaurus’ neck because humans wear ties at the base of theirs as well,” Andrea explains. A clear consensus was forming, yet I had something of a revelation late in my research: I don’t just need a clothing expert, or just a dinosaur expert, I need someone who has actually dressed dinosaurs on a professional level. Thus, I reached out to Kirk Thatcher, producer and dinosaur designer on the sitcom Dinosaurs.

Without hesitation, he tells me, “It would go on the bottom because that’s where the collarbone is! No doubt about it!” I even throw Thatcher a curveball, showing him this picture of Monica, the show’s only sauropod, wearing a collared shirt with a handkerchief almost at the very top end of her neck: 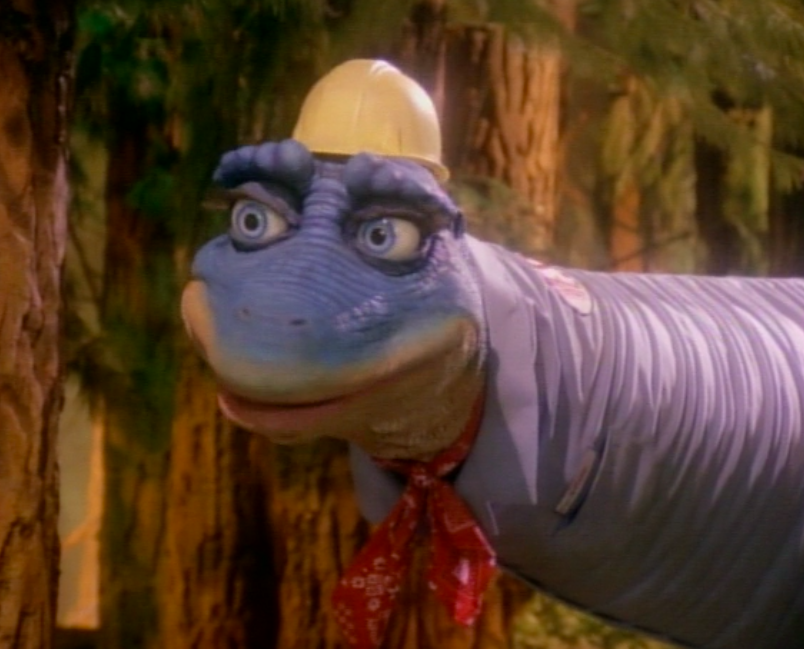 Thatcher, though, still holds firm, explaining that collars are a different situation. “The tie would always be worn with or around the collar but if there was no shirt — like in the picture — then it should sit just above the start of the neck.” In truth, the reason why Monica wore a collar so high was because she didn’t have a bottom of her neck — there was a puppeteer down there working a bunch of crazy controls. Had she somehow been an entire, full-bodied animal though, I’m pretty sure Thatcher would have put the collar at the bottom of her neck.

So, that covers that one. If a brachiosaur wore a necktie — in particular, without a shirt, as the picture depicts — it would definitely wear it at the bottom of the neck. Even if it did make him look like a bit of a slob.