The Despicable Biology of Minion Sex

I hope you’re ready for an incredibly in-depth physiology lesson, because you need to understand exactly how Minions reproduce

I’ve been down this road a few times, so I know how this kind of thing goes: I email just about everyone I can think of that’s officially involved with a property, and despite a valiant effort, my question is completely ignored. This happened with Kool-Aid when I asked them if the Kool-Aid Man was the pitcher or the liquid; it happened with Red Baron when I asked why they named a frozen pizza after an American-murdering fighter pilot; and it happened with Disney when I asked them to comment on Kermit and Piggy’s abusive relationship. So when I wondered to myself recently, How do Minions reproduce?, I knew I’d never get an official answer.

I gave it the ol’ college try, though — I sent out a flurry of emails, all of which were ignored but one. This single response came from a character designer from Despicable Me named Carter Goodrich, who joked that, to get more Minions, all it takes is “a few clicks on the keyboard, I imagine,” and while I appreciate the reply, that’s hardly the dirt I was looking for.

Fortunately, I had a Plan B: Ask a biologist what my options are for Minion reproduction, and then watch all the Minions and Despicable Me films to see if I can conclude an answer to my question, given the evidence presented.

The scientist helping me out here is JV Chamary, an evolutionary biologist and Forbes science contributor, who authored the book 50 Biology Ideas You Really Need to Know. For reference, I sent Chamary the following clip from the beginning of the 2015 film Minions, which shows Minion evolution all the way back to the primordial ooze, where three single-celled Minions follow bigger and badder organisms, constantly in search for the best boss to serve. Over this sequence, the three Minions evolve to gain eyes, flippers and mouths. At the end of the sequence, when their latest boss is leaving the water for life on land, a flurry of Minions join the main three.

This sequence suggests one of two things: that either those first three Minions are the progenitor Minions, giving birth to those others; or those approximately 400 other Minions — I counted — were offscreen the whole time. Personally, I believe that these 400 other Minions are the offspring of the first three, and here’s why: Though the exact number of Minions is never said in any of the films, in 2013, production company Illumination revealed that Gru commands 10,400 Minions, which means the Minion population has grown in the last three billion years, which means that it had to start somewhere, and the best evidence we’re given as to where it started was with those three little single cells about 3.7 billion years ago (which is when life first appeared on Earth). 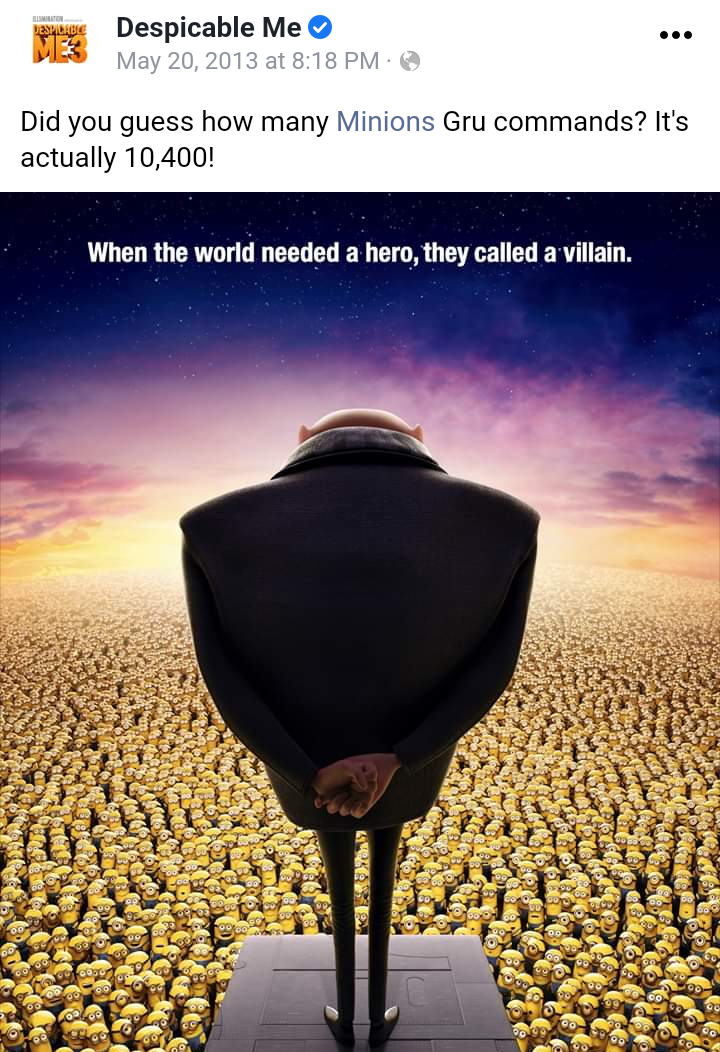 Okay, so, back to my evolutionary biologist. Chamary begins by breaking down that clip I sent of the Minions’ evolution. “It reveals that there are three different larval forms of the Minions — they each have different body types, or what biologists call ‘morphs.’ There’s the Kevin-Type, which is the tall, two-eyed one; the Stuart-Type, which is the one-eyed one with medium height; and then there’s the Bob-Type, the short one with two eyes.” Chamary is getting these names from the Minions film, which focuses on three central Minions, Stuart, Kevin and Bob.

Chamary says that my first option is that the Minions reproduce asexually, and if that were so, those three morphs would forever remain distinct, with no features crossing over. There would be no variation in the Minions, but for the occasional mutation, which Chamary says would be more severe. “You’d probably have Minions with no eyes and some that were a different color,” he explains.

He then adds that there are no creatures that naturally have three parents, and if there was, there would be a huge evolutionary disadvantage to requiring three mates to create offspring. This means that, if the Minions reproduce sexually, one or two of the first three Minions are female, but the other one or two are male. It could also be that Minions are both male and female simultaneously, like flowers, yet they still reproduce with each other, not asexually. It could also be that they’re male at some point in their life, then female at another point, which Chamary says happens with snails, but, of course, I already know this from Jurassic Park.

However they may mate, Chamary explains that with sexual reproduction, you’ll have diversification in the appearances of the Minions. Minions, for the record, are only identifiable by height, number of eyes and their type of hair — that’s it. So if there’s any diversification, that means that the Minions reproduce together, not asexually.

After my conversation with Chamary, I begin watching Minions, which is the third film in the franchise, but the first chronologically. From the film, I learn a lot about the Minions. First of all, there’s lots of diversification, particularly in their types of hair, which means that Minions definitely reproduce together, not by themselves. I also learn that Minions never die. Not only does this movie — and the other three — show that they are impervious to injury, but it also specifically names “Norbert” as a Minion that was alive 3.2 billion years ago (when life first came on land). Later on, that same Norbert can be seen in 1968, which means that all Minions are everlasting and that those original three Minions are the very same Bob, Stuart and Kevin in 1968 (when the Minions first arrived in New York).

In the subsequent three films I learn almost nothing of use. I pay close attention to anything related to Minion sex or sexuality, but I find very little. Minions all have male, human names and dress like males, but this, of course, is irrelevant. They occasionally dress up as humans, both male and female, but that’s also irrelevant. Occasionally, various Minions appear to be attracted to human women, and occasionally they appear to be attracted to one another, but the Minions who show such attractions have varying features with no consistency. Even if they did have consistent features attracted to other consistent features, that wouldn’t account for gay Minions, which, of course there are gay Minions. The coolest thing I do learn is from Despicable Me 3, when I find out that there is a Minion named Mel, who is glorious.

So anyway, binging all of the Despicable Me movies was pretty much a waste of time, scientifically speaking, but I did notice some things about Minion diversification in general. For one, most Minions are of average height, or Stuart-Type height. According to Chamary, this would suggest that Stuart was the sole male or sole female in the original three Minions, as this is the single most widespread trait among Minions. Stuart would have had to have mated with the two others to create all the other Minions.

Also, tall Minions all resemble Kevin, with two eyes and sprout hair. There may be one one-eyed tall Minion, whose picture I found online, but I cannot find his name and cannot find a single other tall, one-eyed Minion. Because of this, I conclude that this Minion has a mutation, and that, aside from that one, all tall Minions are two-eyed with a sprout hair.

Okay, so, because Stuart is the sole male or sole female, that means he mated with the other two to create the rest. This means there are two primary Minion lineages, the Kevin-Stuart lineage and the Bob-Stuart lineage. I believe the Kevin-Stuart lineage only creates Kevin types — this is a genetic flaw that accounts for the lack of diversification in the Kevin-Stuart lineage, or why there are no other hairstyles on any Kevin-Type. As for the Bob-Stuart lineage, they create Bobs (short with two eyes), Stuarts (average height with one eye) and BobStuarts (average height with two eyes). This accounts for why there is such diversification in hairstyles between Bob-Types and Stuart-Types. This would also suggest that Bob-Types are more preferable mates for Stuart-Types, but since Kevin’s been leading the Minions for 3.7 billion years and Minions never die, it makes sense that Kevin-Types wouldn’t be completely replaced by Bob-Types either.

The only remaining question, then, is which Minions are male and which are female, and I have determined that if a Minion has an identifying sexual feature, it must be the eye, as Stuart was the sole one-eyed original Minion. I also say Stuart is female, and here’s why: Because Minions are immortal and there are only 10,400 of them in 2013, this suggests there is a huge gender disparity in their population, which limits their number of offspring. One-eyed Minions account for about 25 percent of the Minion population, and I assumed that a deficit of females would be of greater consequence to a low population because, while males can impregnate many females at once, females can only be impregnated by one male.

To confirm this, I consulted reproductive biology professor Joy Reidenberg, who confirmed that yes, less females in a population would limit their growth more so than a lack of males would. This means that Stuart was the sole female of those original three Minions and, if the number of eyes is a sex-identifying feature, all one-eyed Minions — Stuart, Norbert and even Mel — are female.

When I review my conclusions with Chamary, he agrees with much of my logic but presents some other possibilities. For one, he thinks Kevin-Types may reproduce asexually thanks to their lack of diversification. My issue with that is that it essentially makes Kevin a separate species, which is something I cannot accept for the leader of the Minions, so I’m sticking with my “genetic flaw” theory. Chamary also speculates that, thanks to their low population, “the Minions, being somewhat intelligent beings, may have instituted some sort of population control, similar to China’s one-child policy.” This, to me, is totally logical, and isn’t mutually exclusive from my conclusion that all one-eyed Minions are female, so I’m cool with it.

Chamary also says that there are some general assumptions and oversimplifications made here, but, overall, the explanation kinda-sorta holds water, which, to me, is the closest I’m ever getting to authoring a peer-reviewed paper on genetics, so I’ll take what I can get.

Of course, none of these conclusions will ever be confirmed by Illumination so none of this will be proclaimed as canon within the Minions universe. However, there is one, undeniable truth that has been discovered here: Minions definitely fuck.