Bernie Sanders Swings Like a Man Half His Age

The pitch is a little high and inside, but Bernie Sanders is ready. Shoulders squared, the presidential candidate raises his elbow and wrists in time to leisurely flick the ball into the outfield. As videos of Sanders hitting dingers make their rounds every few months, I have to wonder: Can Bernie, a 78-year-old recent heart attack patient, still swing with the rest of them?

When we talk about Bernie’s athletic past, it’s mostly his basketball prowess that makes headlines, but Sanders has a famous passion for the game of baseball. If this wasn’t evident in the fact that he brought a minor-league team to Vermont in 1983, then it’s abundantly clear from his fundamentally sound swing.

I’m no expert; my baseball career was so inactive I’d test how long I could go without having to wash my jersey. So I reached out to Ben Mangan, a professional hitting coach in Oakland, California. According to Mangan, Sanders is, in fact, a swinger.

“I can’t say I’ve worked with too many people of his age,” Mangan says, “but I’ve seen a lot of terrible candidates playing sports in my years. Not Bernie. For an old guy, he’s got a very smooth and fluid swing that I wouldn’t expect.”

Of course, all great swings start with a fundamental stance and a good grip on the bat. With Bernie’s feet placement, there’s some room for improvement. “His stance isn’t great,” Mangan says. “He’s just kinda standing there. He’s not bent over or turned in, his feet are a bit too close together and he’s a little too open.” Hey, at least it’s working for him.

What about Sanders’ grip? Are his knuckles aligned? “His grip… you know, for his age, there’s nothing wrong with choking up,” Mangan explains. “It’s a little more old-school. He’s hitting for contact. Modern baseball players are just trying to hit home runs, so they don’t really choke up anymore.” 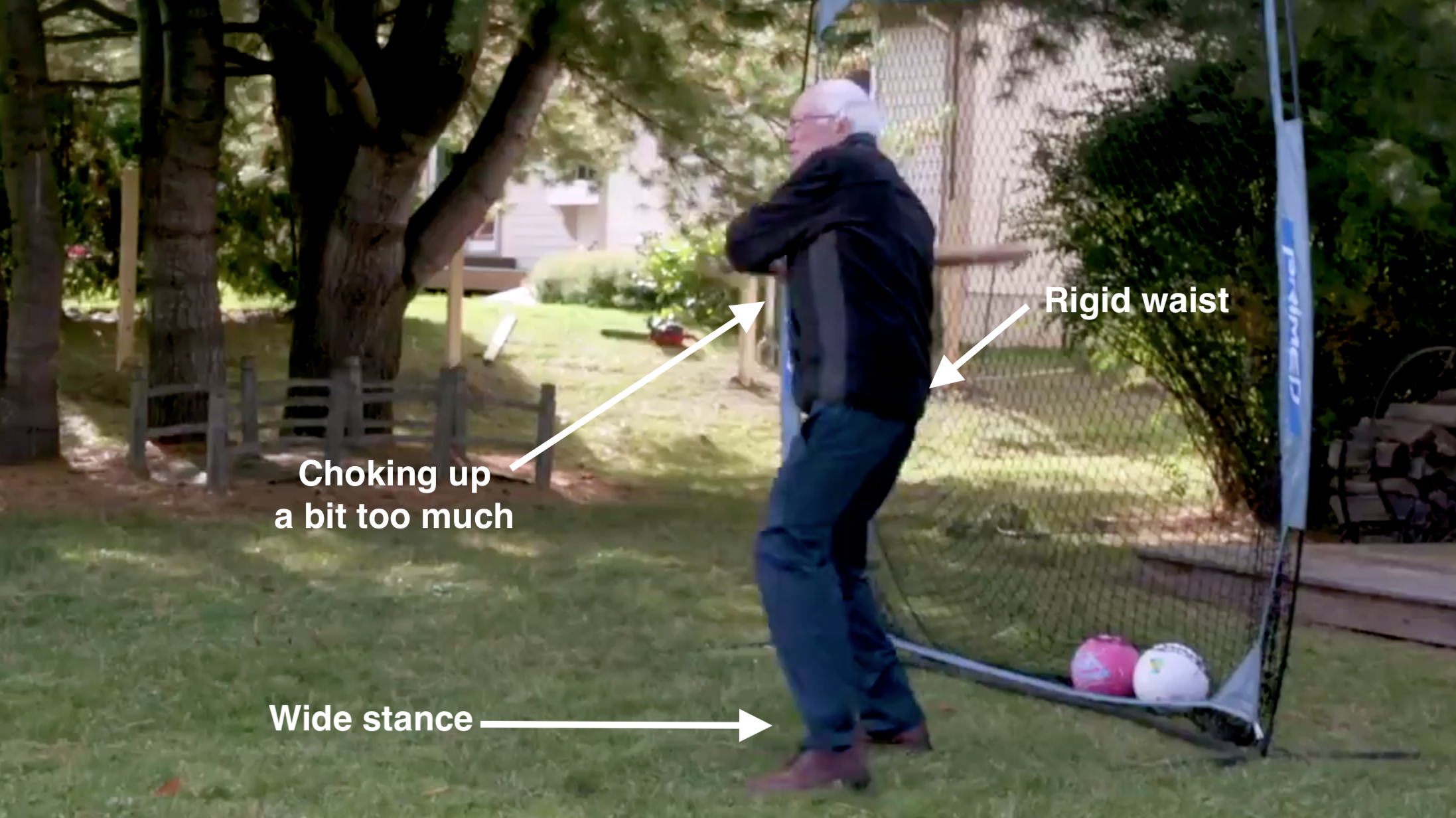 As long as Sanders is hitting the ball like his, the grip and stance matter less. It’s all about “the physics of his swing,” Mangan says, and “the fundamental physics of the swing are all there.”

Mangan raved about Bernie’s bat control. “His swing is fundamentally very sound. He keeps his head still, he has a great weight transfer, he’s hitting the ball in front of him and he has good extension after contact.”

“You can see his back foot comes off the ground a bit, which is really good,” Mangan continues. “Your back foot should actually come up off the ground — or at least the tippy-toe of your foot — to get a full weight transfer.”

In fact, Bernie’s got a very “modern swing,” Mangan says. (Besides his choking up, that is.)

“The big vogue in baseball right now, what everyone is talking about, is called ‘launch angle,’” the coach says. Basically, he’s talking about the angle at which the ball flies after the batter hits it. “Sanders has a great launch angle.” 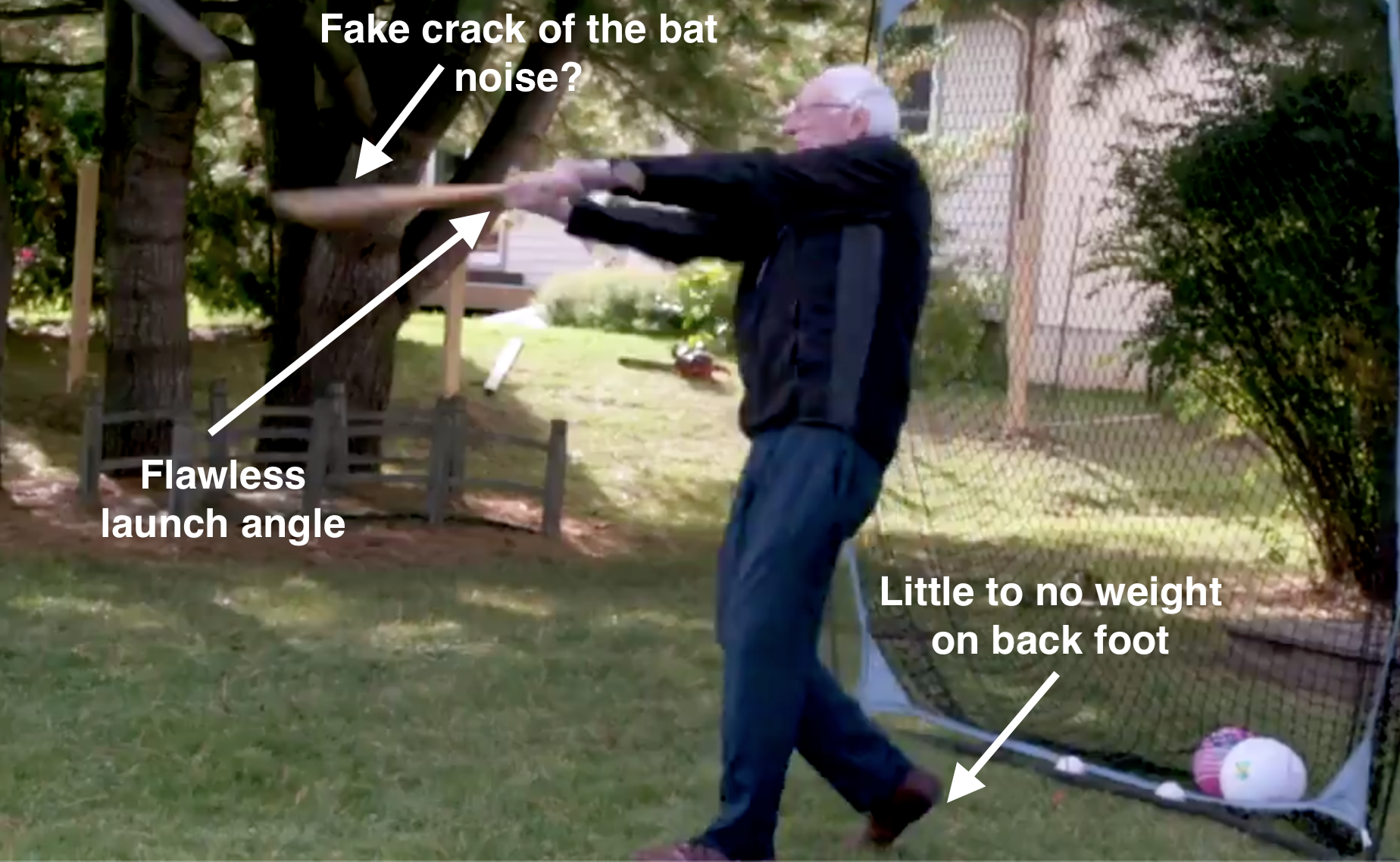 According to Mangan, “there’s been a change in hitting philosophies over the last five years”; many players now focus on launch angle in addition to where and how hard they hit the ball. “They can link the velocity of the ball and at what angle that it comes off the bat, then use that data to calculate which types of hits lead to more runs over time.” (Generally, hitting the ball into the air gives the batter a better chance of landing on base.)

Matt Lisle, former hitting coach for the Chicago White Sox, agrees with Mangan’s assessment, but he has a few more critiques. “Bernie actually has great bat path, which results in some really good, high line-drive launch angles,” he says. “But his swings are all arms and hands; if he could get his hips and lower half involved, he’d see a big gain in power.”

Mangan adds that Sanders could be a little more disciplined at the plate. “He was kinda swinging at pitches out of his strike zone. But a high pitch is exactly what you’d wanna do if you’re trying to hit fly balls to someone, which it seems like he was doing.”

“Now, the crack-of-the-bat sound, that had to be doctored, because there’s no way it was that loud,” Mangan laughs. “But overall, his swing looks great! I’d bet he not only played baseball when he was younger, but he was pretty good when he did.”