Bernie Sanders Has No Shot

Sen. Bernie Sanders, age 77, flicks his wrist and sinks basket after basket with the focus and rhythm of an old pro logging shots at 6:30 a.m. in the YMCA basement gym. As videos of the fiery presidential candidate drilling twos go viral, I have to wonder: Can Bernie still ball with the best of ’em, or is he way out of his league?

I’m no expert — I was cut from my notorious 0-25 freshman-year team — so I decided it’d be better to let some real pros weigh in.

It’s All About the Followthrough

Julz Allender, a former collegiate head coach in California and professional shot coach, says if she had to pick whose shot Bernie’s most closely resembles, it’s “maybe a Shawn Marion-Larry Bird combo.”

The Matrix and one of the best shooters in NBA history? Not a bad start. But Allender says Sanders has plenty of areas to improve. 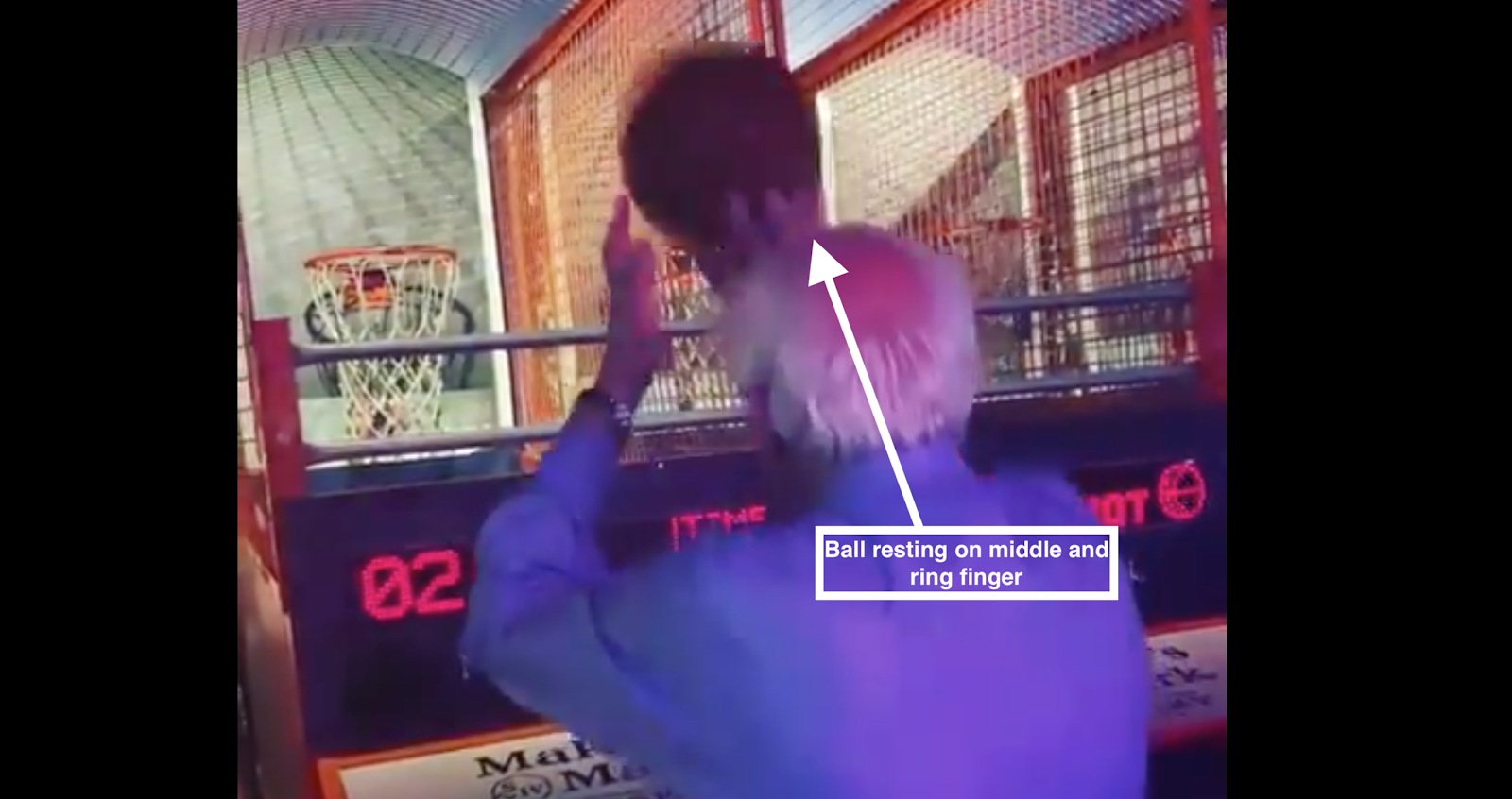 Sanders ends up “pushing the ball,” Allender explains, because he doesn’t have enough initial bend in his wrist, nor is he “snapping the wrist down as if reaching into the bottom of a cookie jar.”

Here we can see Bernie’s release point. No, he’s definitely not reaching into the cookie jar:

Rich Stoner, a professional basketball trainer and shooting coach in New Jersey, tells MEL the senator looks pretty good popping shots from close range. However, “move Bernie back a few feet and I bet he does not make nearly as many shots,” Stoner says, agreeing with Allender that Sanders needs to work on his followthrough. 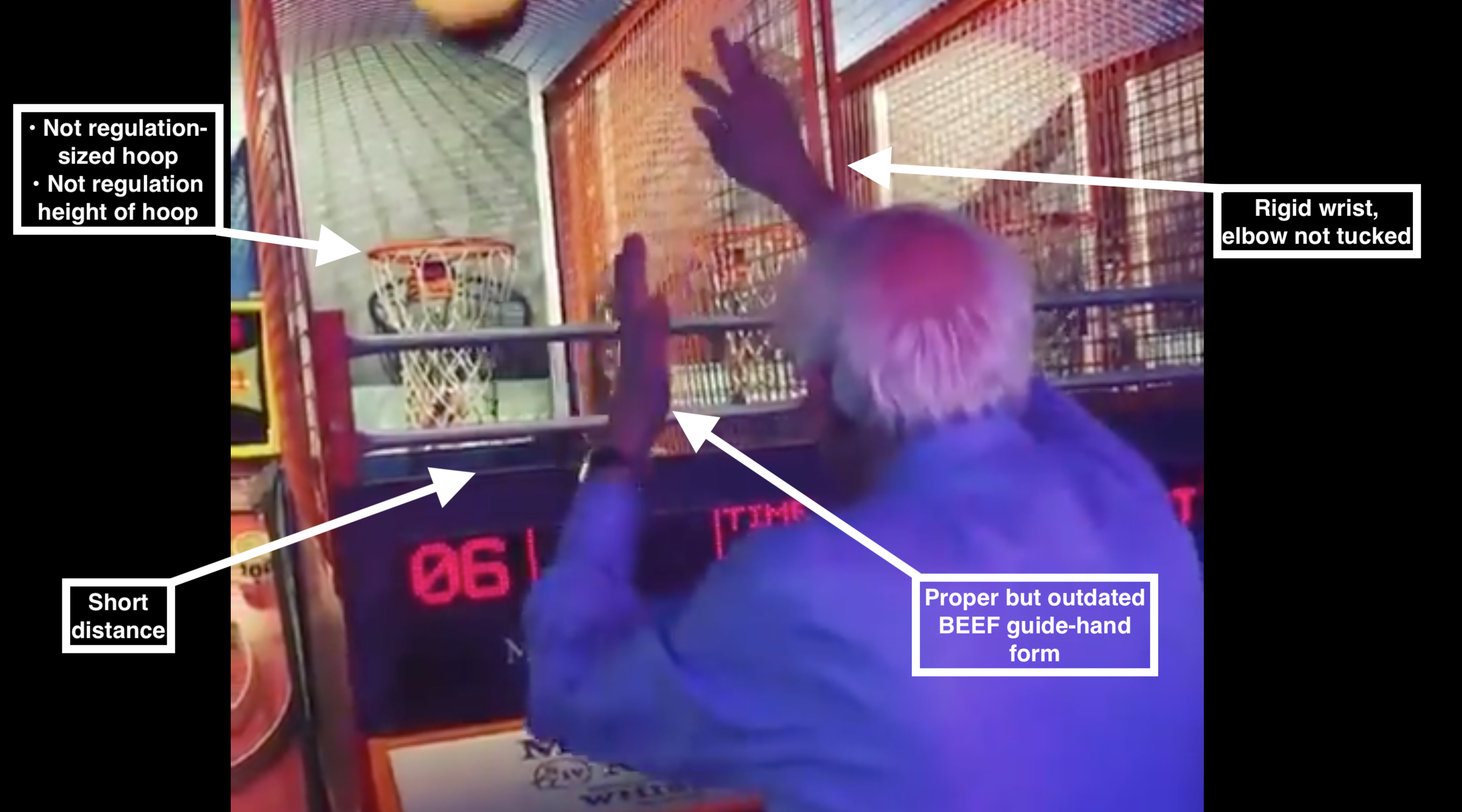 “He needs to finish his jumper by extending his elbow and hand through his target, not half-finishing and pushing it,” Stoner says. “This may work close to the rim or in Pop-a-Shot, but not so much shooting from any distance.”

It’s especially striking compared to a basketball player like, say, former President Barack Obama. “Obama is a baller,” Stoner says. “His shot is way better. You can see that he shoots very similar to players today. Body turned slightly, dips, extends through the rim. No comparison really.”

This could just be the way Sanders learned to shoot. The 2020 candidate’s shooting form resembles that of “someone who learned to shoot in the ’50s,” Stoner says. “His hand is under the ball, elbow bent so it looks like an L, and he pushes it on his release without extending on his finish through his target. Not sure exactly why it was taught that way, but it’s based on this concept called BEEF: balance, eyes, elbow, followthrough.”

“Bernie got a good form if it were back in the ’50s,” Louis “Sweet Lou” Dunbar, current head coach and 27-year veteran of the Harlem Globetrotters, tells MEL. “That’s the way they taught you way back in the day, to use that left hand to guide until you release with the right hand. But I don’t think you’re getting those shots off today.

“If he were still playing back in the ’50s, he might be awesome,” Dunbar laughs. “I think he’d be a good free-throw shooter back then. But I don’t know if he’d get the jump shot working. Bernie’d have to get fouled because he wouldn’t make a shot otherwise.”

Dunbar adds, “He probably hasn’t discovered this yet, but he probably shoots better left-handed.”

“Could you imagine Kevin Durant shooting like Bernie?” Stoner says. “This is not necessarily the way anyone shoots these days, or how I would teach anyone to shoot.”

Once Sanders achieves a proper wrist snap, he should hold that position until the ball goes through the hoop, Allender explains. (We’ll give him a pass on not doing that during Pop-a-Shot.)

How would the coaches fix this? “I’d have him do what we call ‘three-finger shooting,’ where he uses only his index, middle finger and thumb,” Allender explains. “He would stand three to five feet from the basket, start with arms fully extended and just shoot the ball and focus on index-finger release and wrist snap.”

That’s not all. “The third thing I would correct is the pace of his shooting form,” Allender continues. “His is too quick and jerky, and so the shot becomes a hard shot instead of being soft, where it can bounce softly on the rim.” In other words, Bernie’s shooting laser beams instead of rainbows.

Here we can see Sanders’ rhythmic motion (or lack thereof). Without bending his knees, dipping his elbow and lowering his hand’s position on the ball, the senator will be limited to close-range shots.

“The ball is too high on his head, which will take away the arc in the shot, which will affect shooting percentage and range,” Allender says. “The ball should be about forehead height. If you look at Steph Curry, who’s arguably the greatest shooter we have ever seen, you will see his shooting form starts at his forehead.”

Sanders “wants a smooth up-and-out motion. His shooting arm and his knees should mimic his elbow to create rhythm,” Allender adds.

Stoner agrees. “The elbow in a jump shot is like a slingshot,” he explains. “If you take a look at good shooters in the NBA, WNBA or college, they actually dip the ball slightly on the catch prior to bringing it up to their release point. This gives the shooter both rhythm and power” — something Sanders is sorely lacking. 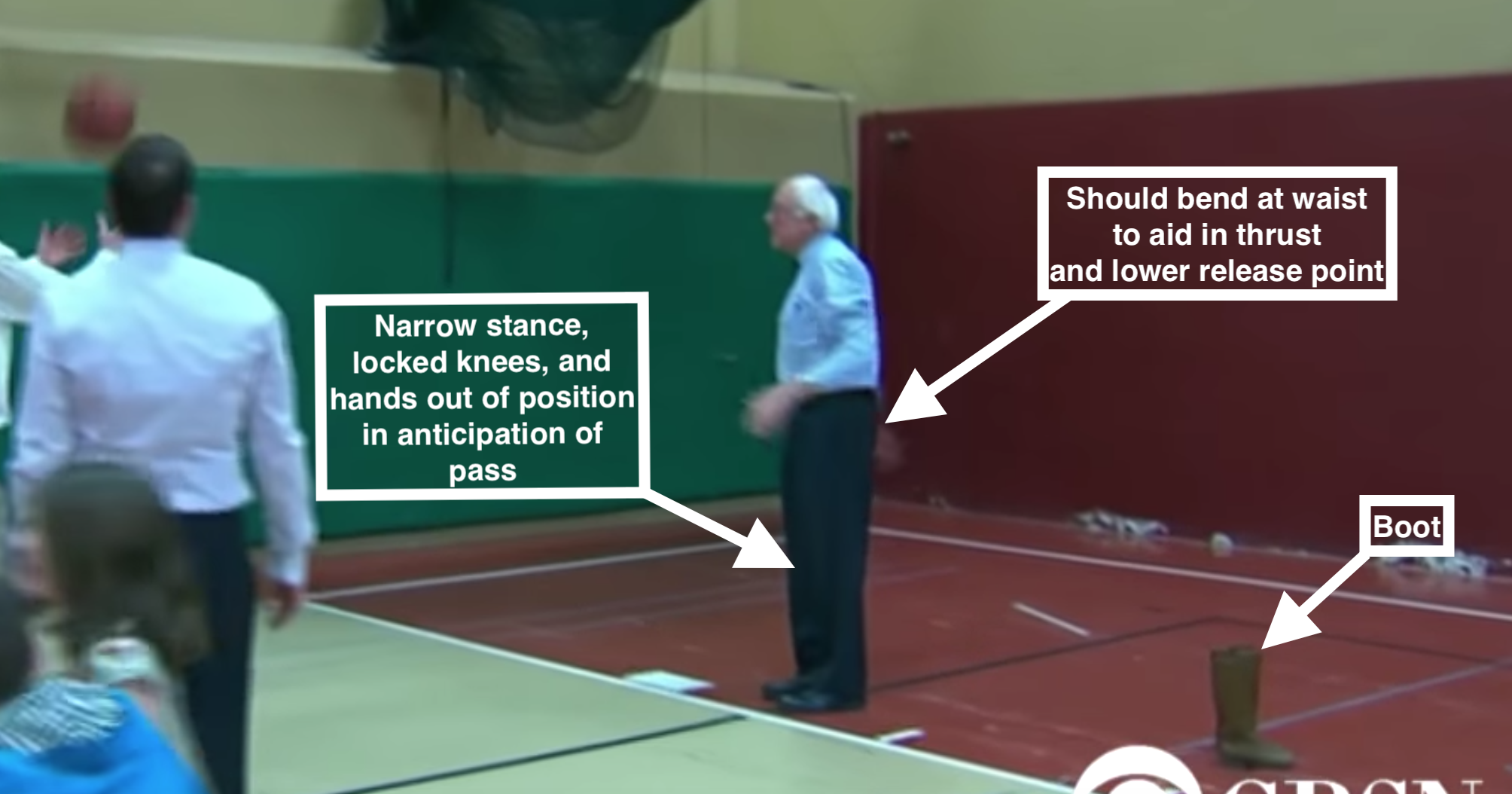 But hey, keeping up with the younger guys on the court is tough, says Dunbar, who turns 66 today. “He will be sore tomorrow, but you gotta keep moving — he’s doing the right thing. As long as he keeps movin’, he’s going to be all right, but I don’t think there’s a future in [basketball] for him.

“Bottom line is, basketball is an athletic sport, and the jump shot, a key component, needs to be more athletic in order to keep up,” Stoner concludes. “Sorry, Bernie. I love Vermont, but the jumper needs work.”