The alcoholic lovechild of stoners and craft brewers, they’re so popular you can hardly find them in stock

Last winter, ahead of a late-night home screening of Dude, Where’s My Car?, my best friend’s boyfriend, Ricky King, had us wait for him to relocate a beer from the fridge to the freezer. While he was definitely high when he did this, it wasn’t the weed making him shuffle his beers from a cold location to an even colder one. Instead, he told us, he was allowing the beer to freeze just slightly enough so that it could be served in perfect slushie form. When I questioned what he meant by that, he said the beer had fruit in it. Like an actual smoothie.

Independent breweries across the country have been concocting these beer-and-fruit combinations and selling them to thirsty (hungry?) craft connoisseurs like Ricky, who special order them from limited releases online and usually pop them in the freezer right before consuming. Typically called beer slushies, the product is akin to a regular beer, if regular beer was ultra thick and tasted like a tangy orange creamsicle. Often, the cans are covered in trippy, cartoon-y imagery. If it all sounds like some kind of stoner fantasy beverage, that’s because it is.

Beer smoothies, slushies and milkshakes (yes, you read that correctly) have become increasingly popular over the last few years, particularly among breweries looking to create completely unique products. Though different forms of beer smoothies and slushies can be made at home using a blender, this iteration requires its own brewing process. Most are made first by brewing a high ABV beer, often similar in form to an IPA as they lend to a more flavorful product and are diluted by the ingredients added later. This beer is then “soured,” fermented with a bacteria like Lactobacillus that lends a tart flavoring, and fermented a second time.

Once the beer base is complete, the smoothie component comes into play. In addition to flavors like vanilla, marshmallow fluff, cinnamon and other dessert-y ingredients — many of which add dairy to the hops (some even use lactose as part of brewing, like a milk stout) — the brew is mixed with unfermented pureed fruit and carbonated before being packaged for sale. 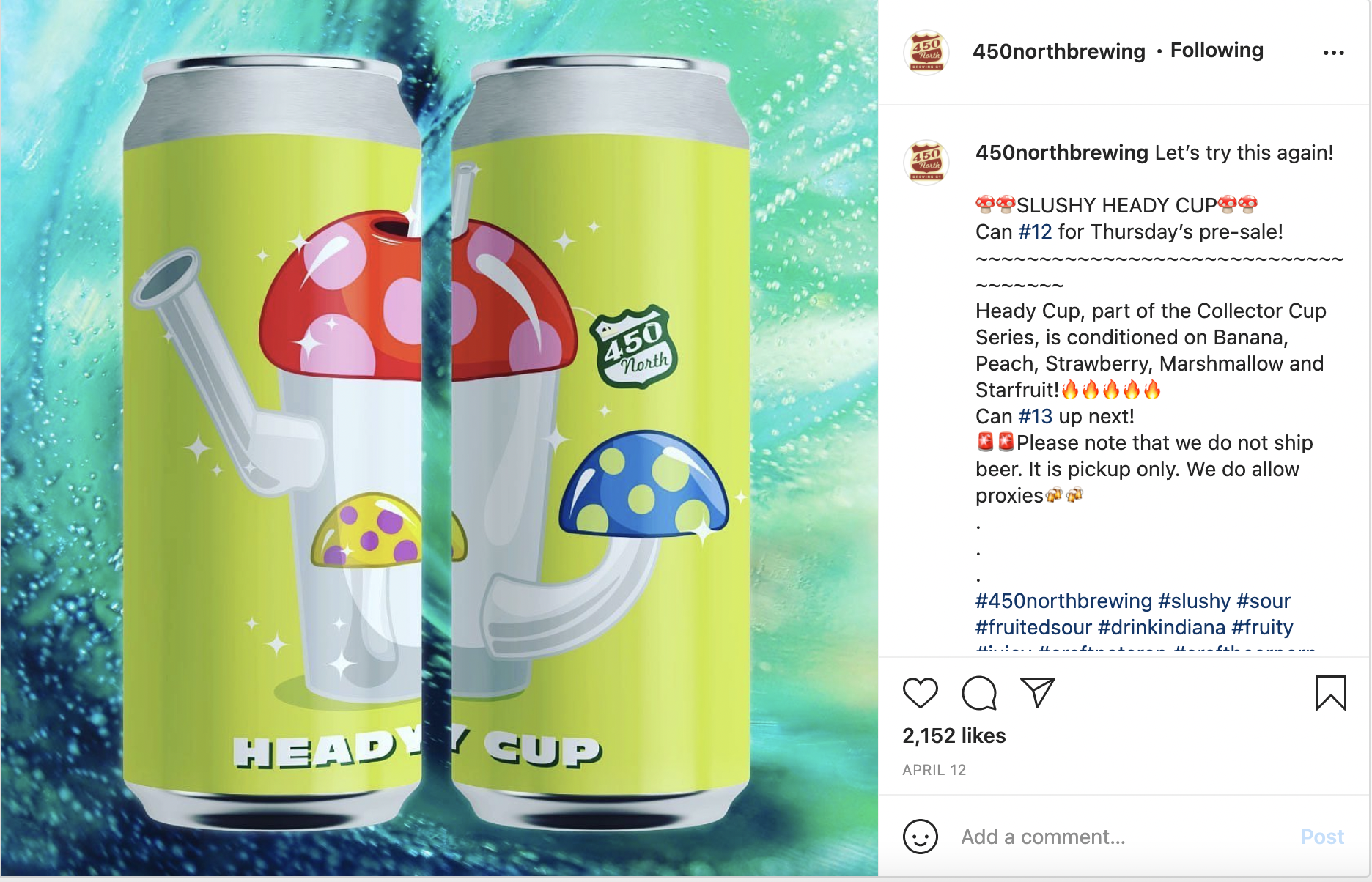 The end result is a thick, treat-like beverage rather dissimilar to beer as we know it. While tasty, they aren’t exactly designed for chugging. Instead, they’re better served as a snack — particularly as munchies. Case in point: Some breweries, like 450 North Brewing Company in Indiana, integrate stoner imagery in their smoothie beers. Their beer labels often have pot leaves, bongs and dab rigs on them, as do some of their shirts. Other popular breweries in the beer-slushie game include Drekker in North Dakota, Evil Twin Brewing in Queens and Energy City Brewing in Illinois. 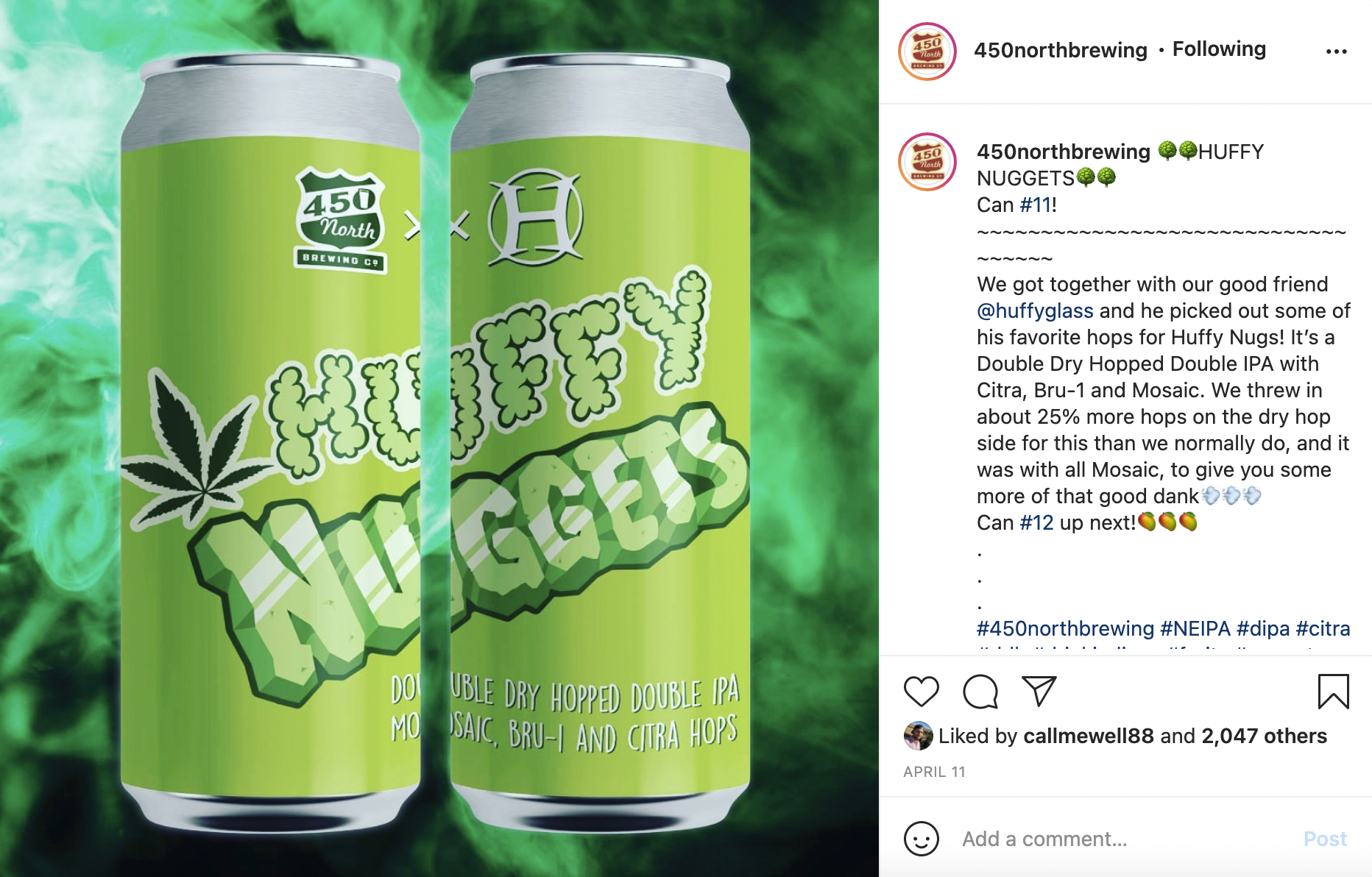 Ricky, who is himself a glassblowing artist, first noticed them being shared on Instagram by fellow collectors of glass primarily used for cannabis. He was drawn into the art on the cans made by 450 North specifically, but he also noticed parallels between the beer and glass culture. “I think they got popular in the cannabis industry because they’re hard to get and expensive,” he says. “A lot of growers who have a ton of money will end up blowing it on stupid shit like expensive beer just to flex.” On top of that, he adds, “Glassblowers starting to make heady beer chalices has helped the slushie beer scene take off.”

Colton, a 31-year-old bartender in the weed-y, craft-beer-y state of Colorado, has also noticed a certain symbiosis between cannabis and specialty brews. “There’s this huge culture around weed and craft beers,” he tells me. “From a marketing perspective, a lot of those beer companies would put a weed leaf on the beer can, or like a Deadhead dancing bear. Those subcultures definitely go hand-in-hand — the craft beer guy and the hippie.” (Not to mention, that a beer smoothie offers a mellow means of cross-fading a cannabis high while helping satiate the munchies from that said high.)

Smoothie beer, however, isn’t exactly easy to get (as Ricky noted). They’re often released in extremely limited batches, retailing for more than $6 a can — so if you aren’t following when a new beer has dropped, you might never get the chance to try it. (In fairness, though, this can be true of all craft-beer varieties.)

Luckily, I was able to buy a couple off of Ricky, who manages to snag them as soon as they’re available. I liked them, but I didn’t like them so much that I wanted to continue paying that price regularly. Then again, I don’t smoke weed. Perhaps if I was stoned, $6 would be a small price to pay for a sweet-n-sour boozy treat. As for Ricky, he’s actually had to stop drinking them. “The high fruit content is a recipe for cavities,” he explains.

Well, you know what they say: Drink responsibly.