The Beer Bong Has Been Around Way Longer Than You Think

We humans have been drinking beer for thousands of years and we’ve also had funnels for thousands of years, so it’s no wonder that the very first person to think of combining the two is lost to history. There’s also the fact that, while other great minds of the ancient world, like Plato or Pythagoras, had the wherewithal to write down their discoveries, whichever innovator first funneled booze into his gullet likely passed out and spent the next day recovering from a massive hangover, totally neglecting to record his findings for posterity.

To offer perhaps the clearest ancient example of this, a lecture was given in 2009 by history professor Ian McNeely, titled “Nine Hundred Years of Unruly Students,” which offered examples of student misbehavior dating back to the Middle Ages. As noted by VinePair, among his examples was an image from Medieval times, depicting a man lying on his back with a funnel in his mouth, being given a drink by another.

There are also artifacts known as “rhyta” which are, essentially, ancient Greek beer bongs shaped like animals. They were meant to hold a more religious significance than the modern beer bong, but the funnel-shaped cups were poured in from the top and emptied out from the bottom, which would require immediate consumption. Then there’s this industrious gentleman, whose story was covered in New Jersey’s Matawan Journal on November 29, 1900, and was appropriately titled “Got More Than He Wanted”: “Frank Dobson of Cliffwood went into Omerod & White’s market in Keyport a few days ago and introduced a new method of drinking cider through a funnel. He lay on his back on the floor with his mouth under the faucet of the cider barrel and then placed the funnel in his mouth. Someone turned on the faucet and Frank was nearly strangled by the cider, which caused him to sputter at a great rate as he choked and gagged. The attempt was a failure, of course, but Dobson thinks he could do better after a little practice.”

Whether or not Dobson mastered his skill isn’t known, but I, for one, like to believe he did. In my own imagined history, I picture Dobson perfecting his funnel technique a few months after this embarrassing incident at Omerod & White’s market, but having been lampooned in the paper, deciding not to share his gift with the world. Instead, he kept it to himself, passing down the technique only to a trusted few, where it would remain a guarded secret until sometime in the 1980s, when the technique finally became more public.

Well, that’s when the term “beer bong” seems to have taken off. The clearest way to show this is by use of Google’s Ngram, which is a graphing tool referencing a huge database of books. As you can see, the phrase “beer bong” doesn’t seem to exist before the early 1980s, then it takes off like gangbusters in the late 1990s.

Merriam-Webster’s dictionary cites 1982 as the earliest such use of the term, but I found an earlier example in a 1981 issue of the New York Daily News. The article was about a handful of teenagers on prom night, who are later lamenting a costly bill at Trader Vic’s. A passage reads, “Most of the guys remembered how much cheaper and easier it had been to get drunk on the beer bong they had rigged up a few months back.”

What’s curious about the reference was the lack of explanation for what a beer bong is, which suggests that the invention came sometime earlier and that it was already somewhat common knowledge by 1981. This is backed up by the film Dazed and Confused, which features a beer bong in it — the movie was made in 1993, admittedly, but it takes place in 1976. While the beer bong’s inclusion could have been a simple anachronism, the dates do line up, which means the term “beer bong” was likely born in the late 1970s, spread in the 1980s and became mainstream in the late 1990s.

Other early references to the beer bong exist throughout the 1980s. For one, The Daily Tar Heel of North Carolina makes several references to it at the start of the decade, including instructions on how to make one in 1982. The Baltimore Sun pictured one in 1983, and three years later, a medical journal on alcoholism wrote about the device for what seems to be the first time, referring to it as “a modern variant of a drinking party practice of classical Greece.”

With the exception of a reference to a beer bong in the 1987 book Rules of Attraction, most beer-bong references in popular culture seem to begin in the 1990s. Earlier examples of beer bongs on film may indeed exist, but aside from the aforementioned Dazed and Confused, the next earliest example I could find was in 1996’s Scream, where it made a brief but memorable appearance at the hands of Matthew Lillard. And, since Scream was such a massive hit, this appearance might have contributed to the beer bong’s explosion in popularity in the late 1990s, as well as a 1996 appearance in The Real World and a 1999 appearance on Freaks and Geeks.

It would be the early 2000s, though, where the beer bong would truly shine on film. One was featured in 2000’s Scary Movie, but 2001’s Saving Silverman had a more memorable beer-bong scene, where the device is pictured in the hands of rising star Jack Black, who played a beer-guzzling — yet notably polite — beer-bong enthusiast.

2003, however, would bring about film’s greatest appearance of the beer bong. The movie, of course, is Old School, where Will Ferrell plays Frank the Tank, a man reliving his college glory days by streaking and binge-drinking. In a scene many still cite as one of the greatest drinking moments in movie history, Frank initially resists a shot at the beer bong, but then downs it like the old pro he is, leading to a night of further debauchery.

Just three years after this, a beer bong made news when soon-to-be presidential candidate John Kerry was pictured along with one when he stopped by a tailgate party. Unsurprisingly, Kerry didn’t partake, but that didn’t stop the photo from becoming a national news item for days. Two years later, another beer-bong photo would make headlines, when people became outraged at some hard-partying images of Arizona Cardinals quarterback Matt Leinart. 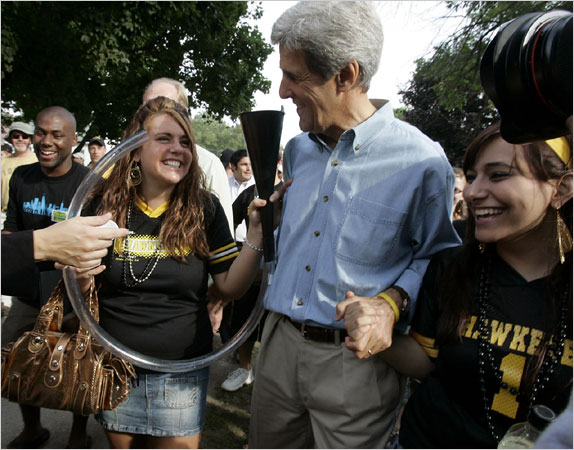 The thing is, after Frank the Tank, the beer bong seemed to enter a new era where it wasn’t enough. That’s not to say the beer bong faded from college parties — it would continue to be (and still is) a staple at such festivities — but people seemed to want more than just a beer bong, so they upped the ante with pressurized beer bongs, multi-tentacled beer bongs and combination weed/beer bongs. They also competed for the “longest,” “tallest” and “biggest” beer bongs. This would also be mirrored in popular culture, like “the beast” in the TBS comedy Glory Daze and a tree-mounted beer bong in the movie Project X. Also, beer-bong puking videos and even butt chugging seem to be a product of this beer-bong one-upmanship.

In a way, it seems Frank the Tank said all that needed to be said about the simple, beautiful device — after that, the only way to move forward was to get weird or crazy. In The Tank’s initial aversion to, and then great enthusiasm for, the beer bong, he summed up the experience of so many who have partied with one. In this, Frank the Tank also realized the full potential of another great, liquid-funneling Frank — the one who walked into Omerod & White’s market a hundred years prior, holding nothing but a funnel and a dream.