I Tried (and Failed) to Rage on the ‘New Four Loko’

BeatBox is a “portable party punch” whose website looks like the marketing material for Fyre Fest. Still, it was no match for the maturity of my 30s

Back in the stagnant years of the Great Recession, a beacon of nihilist joy shone through the darkness: Four Loko. I and countless other recently graduated, totally fucked millennials were smitten with the malt liquor energy drink, which functioned as cheap rocket fuel for weekend binges. A single can was enough to get your ass turnt, and downing a pair — also known as going “Ocho Loko” — was damn near suicidal.

As stupid as Loko made me, I couldn’t deny its invincible high. Once, after crushing 23.5 ounces of the battery-acid-like lemon-raspberry flavor, I decided to take a piss on a very crowded part of Houston Street in Lower Manhattan, then heard some cops blip their siren and tell me to freeze. At which point I decided, with astonishing clarity, to zip up and run for it down a one-way street so they couldn’t follow me. When I found my friends again, they couldn’t believe I had evaded the law (or hadn’t just waited till the next bar to relieve myself). “It’s all the Loko,” I slurred triumphantly.

By 2010, the federal government had forced the manufacturers of Four Loko to pull the product and use a stimulant-free recipe instead. We hoarded original-formula cans for a few months, traded rumors about which places were still selling it and resorted to mixing our own “Bathtub Loko.” But the magic was gone. And while I was actually grateful to the nanny state for taking away a $1.50 beverage that had me blackout by the end of a Saturday-night pregame, I still pined for something as depraved and dangerous to imbibe.

As you might expect, nostalgia, masochism and being my own worst influence have kept me on the lookout for Four Loko 2.0 — a drink to take me to the brink. So when a buddy texted me about BeatBox Beverages, a “portable party punch” whose website looks like the marketing material for Fyre Fest, I snapped to attention.

I learned that the company had drawn a $1 million investment from Mark Cuban on Shark Tank in 2014 and, after some growing pains, is now poised for a big expansion push. Was this the overly sweet, high-ABV concoction I’d been waiting for? Something even more gloriously trashy than the renaissance of icing? It became my mission to find out.

Using the handy store locator widget on the BeatBox Beverages site, I discovered that a retailer close to the MEL office — Lincoln Liquor Locker — carries the stuff. It took a bit of poking around, but I did find individual boxes of all three varieties: Blue Razzberry, Pink Lemonade and Fruit Punch. Right away, I saw one clear advantage to the BeatBoxes: They’re resealable, so opening one isn’t the commitment that cracking a can of Loko was. The alcohol content was appealingly heavy (11.1% ABV), and the math on the label declared each 16.9 fluid ounces to be the equivalent of 3.4 drinks. At $3.50 a pop, that worked out to roughly $1 per serving. Nothing to sneeze at in this economy. 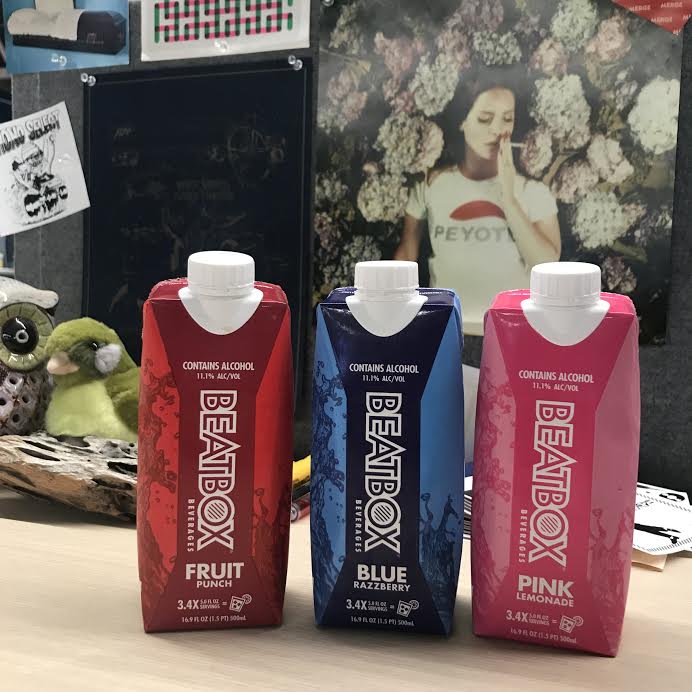 Reasoning that Blue Razzberry is often the trainwreck in artificially flavored booze scenarios — and that the BeatBox’s wine base could only make matters worse — I tried this strain first. Notes of melted Ring Pop, followed by a harsher, vodkaish aftertaste. Even then, the 8 grams of sugar were there in full force. I gave a splash to MEL’s editorial assistant, Magdalene Taylor, who is actually a suitable age for industry-disruptor intoxicants. She was impressed by its drinkability and potency.

“It tasted like one of those Little Hug drinks I was given at summer camp at the Boys & Girls club, making me fear that were my 6-year-old niece to get ahold of some BeatBox, she’d chug it,” she says. “I drank the equivalent of a modest wine pour. My high alcohol tolerance usually negates some of the effects of being 5-foot-0, so normally I can drink like a normal-sized human. But that tiny glass cut through all that. The writing I did at the time proves it. At one point, I wrote ‘methinks,’ which… never have I done before.” 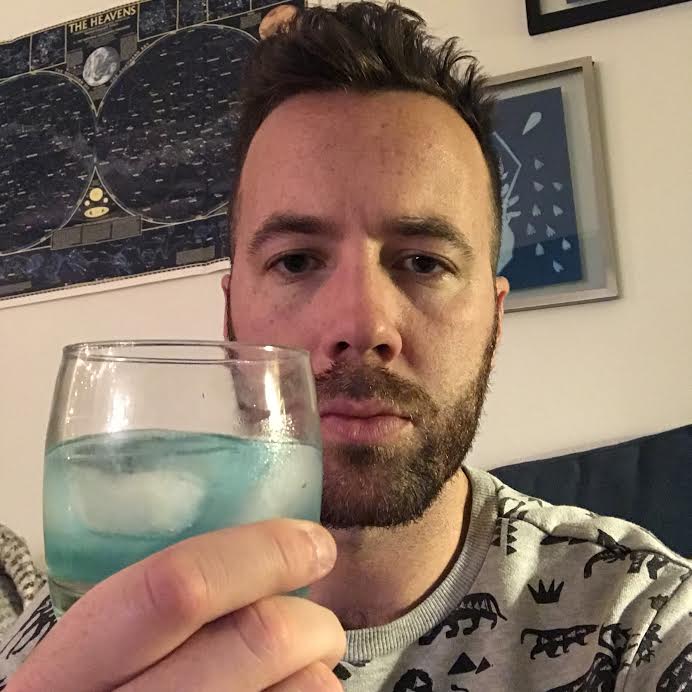 I opted to hold off on more Blue Razz until after some happy-hour beers with co-workers. When I got home and realized I had most of the box left, I groaned out loud. My girlfriend, Maddie, watched in alarm as I fixed myself a BeatBox on the rocks. This cut the sweetness somewhat, though it also prolonged the pain. We watched Pulp Fiction, which I’ve seen approximately 400 times, on Netflix. Before finishing the movie or the BeatBox, I was in bed, and I wound up sleeping in until 11:30 a.m. Wild times, y’all.

My BeatBox binge was off to a slow start, and it wasn’t exactly picking up speed. I spent the earlier part of Saturday going on a run, and afterward, Maddie and I went for a short hike in Runyon Canyon Park. That evening, after dropping her off at work, I was supposed to go over to the apartment of a friend couple who were making pizza with their brand-new pizza stone. I couldn’t bring myself to show up for this small, low-key hangout of thirtysomethings with BeatBox — so I picked up a six-pack of pale ale instead. As a result, I was already somewhat buzzed when I got home that night and popped the top on the Pink Lemonade BeatBox. Although cloying, this would prove the most palatable of the three; even Maddie said it was “not bad.” Rousing acclaim there. 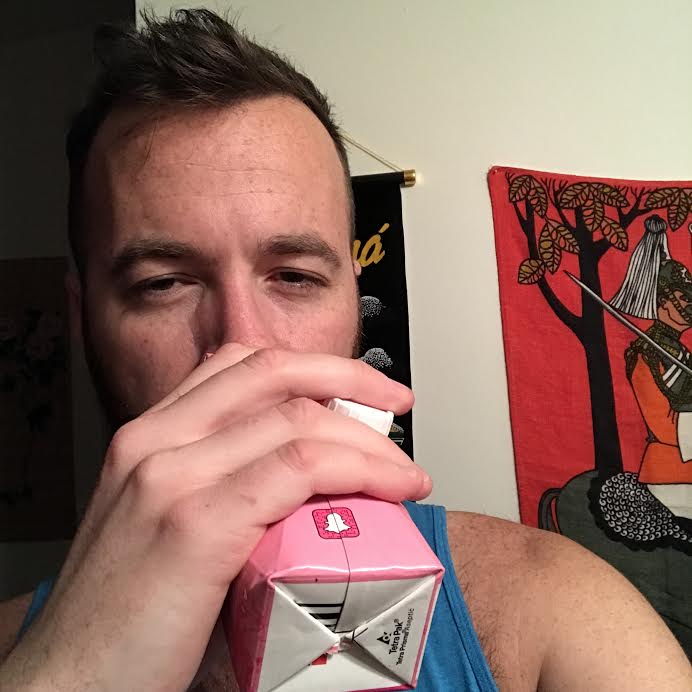 I dispensed with my glass and sipped straight out of the box like a giant toddler.

Still, I was a bit of a fraud, home by midnight and trying to swallow a few more gulps of this Frankenbeverage before I hit the hay, the sounds of actual parties still audible through my apartment windows. I was treating this Pink Lemonade BeatBox like homework instead of the jungle juice it aspires to be: the product, in its original black-market form, was an empty Franiza bag filled with vodka, Crystal Light and cranberry juice. The social media marketing likewise presents it as a tailgater’s indulgence, something to be poured into your face at competitive speed.

Nope. I wasn’t tapping into a crazy youth culture — just tired and out of touch.

The cumulative hangover wasn’t the worst I’ve had, though bad enough that I wanted to flake on plans to go over to some friends’ house for a vegan brunch on Sunday afternoon. Maddie did persuade me, but once again, the idea of showing up with BeatBox was too appalling; we came bearing mimosa ingredients. In the back of my head, I knew I would pay for this propriety when we got home and I had to finish off the stash. As it happened, I found myself alone for the evening — Maddie had another work shift — and declared myself “ready to get weird.” I opened the Fruit Punch BeatBox. 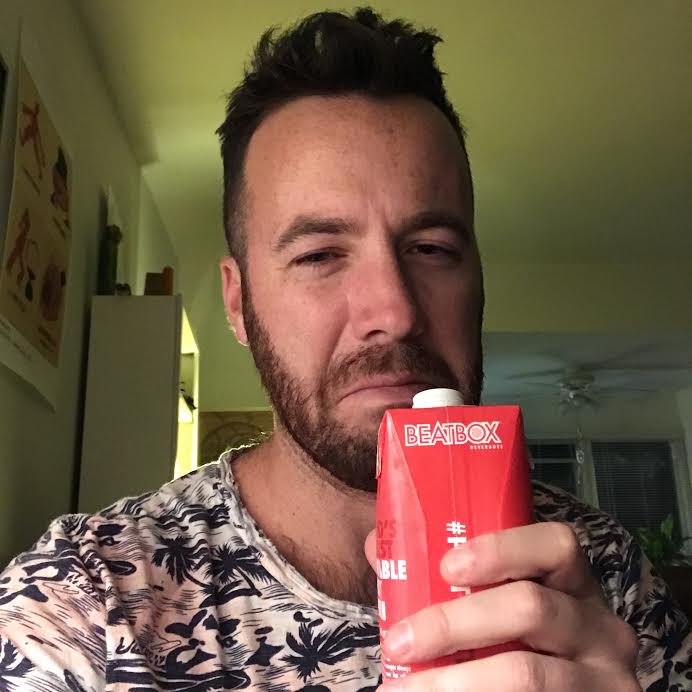 What a grievous miscalculation it was to save this one for last.

It tastes like cherry cough syrup, or liquefied throat drops with a dose of menthol. In a way, however, this posed an advantage, as it forced me to chug in the hopes of ending my misery sooner. I quickly put away half the box and then… began to organize my record collection. After everything was properly alphabetized, I washed the dishes. I cooked myself some pasta. I swept the kitchen floor. What the hell? I was supposed to be going apeshit! 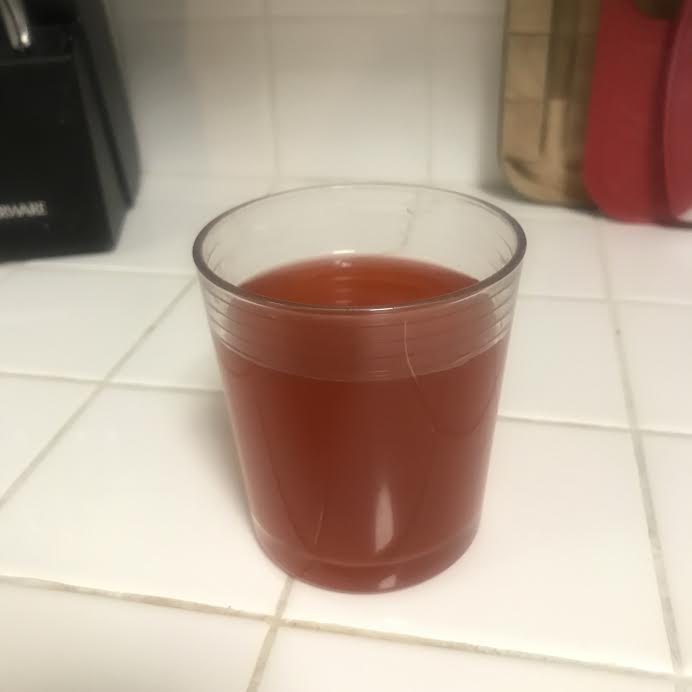 In the end, I went for broke by combining the dregs of all three BeatBoxes into a single, powerfully gross concoction. I want to say that this Voltron cocktail had the flavor of those Fourth of July firecracker popsicles, but from a batch that had been recalled? At any rate, its principal effect was a brain-fog that made it hard to follow or care about the new episode of True Detective. I was thrilled when I’d successfully drained it and was free to pour myself a cleansing, comparatively adult drink: vodka and mango La Croix.

Of course, I don’t blame BeatBox for the unremarkable if quietly pleasant weekend I had. There’s never been such a thing as a party in a bottle, only a perfect match between inexperienced youth and dubiously legal substances (before Four Loko, we had Sparks and Mad Dog 20/20, both of which made us positively feral). At age 33, almost 34, I can no longer trick my body into raging like a college kid — and it’s not like I’m getting invited to keggers, either. No, I’ll have to settle for getting responsibly trashed, preferably on my own couch, in my underwear. Maybe that will sound to some like I’ve lost something, my spark or drive to adventure. I don’t see it that way at all.