‘Avengers’ Is the New ‘Harry Potter’ for Liberal Cringelords

Stacey Abrams is not from Wakanda, you weird little nerds

You may have forgotten in all the, er, hubbub at the Capitol last week that the state of Georgia had just elected two Democrats to the Senate, giving the party control of the chamber. Liberals were jazzed, to say the least — Mitch McConnell out as majority leader, and a better chance for President Biden to pursue his legislative agenda — and they celebrated this belated crest in 2020’s blue wave on Twitter. That’s, of course, where everything started to go wrong.

Once upon a time, the libs enjoyed comparing political reality to the Harry Potter novels and movies: Trump was Voldemort, the evil wizard bad guy, and Democrat leaders were the various noble teachers at Hogwarts, etc. All was a grand battle between magical forces of destruction and protection. This got really, really annoying, not least because Harry Potter is a fairytale originally written for children, and the project of governing the U.S. has zero to do with fictional British characters who fly around on broomsticks and shoot energy beams out of wands by shouting in Latin. In time, fed-up liberals (and especially leftists) started begging these Potter nerds to “read another book,” in the hopes that their strained literary allusions would at least achieve greater variety. The shaming didn’t seem to have much effect one way or another.

But! Then J.K. Rowling — billionaire author of the Harry Potter saga — began her long slide into transphobic hackery, and devastated fans chose to distance themselves from her work. This opened up a critical vacuum in the dumbest parts of online discourse, for how were centrist cringelords and Resistance dweebs supposed to process and memeify the news? Fortunately, the Marvel Cinematic Universe, or MCU, completed its takeover of the monoculture around this time, tying together many superhero narratives in the blockbusters Avengers: Infinity War and Avengers: Endgame, which featured the ultimate big bad, a bald purple guy called Thanos. If you were glued to Twitter in the days following the election in November, waiting for the media to call a winner in the presidential race, you probably saw an absolutely gobsmacking edit of the final showdown in Endgame that cast Trump as Thanos, Joe Biden as Captain America and other Democrats as the rest of the Avengers, who have assembled to defeat their greatest foe.

Truly, the Avengers comparisons should have ended there, because nobody will top this viral video in its maniacal effort to find every politician a suitable place in the comic book pantheon. The clip transcended its corniness, becoming beautiful — if unintentional — comedy. I’m afraid you can’t say the same for the deluge of tweets released by the Democratic victories in Georgia, many of which sought to credit voting rights activist Stacey Abrams for her grassroots efforts to enfranchise people and turn the state blue. Those commentators who didn’t construct weird, elaborate sexual fantasies around Abrams tended to propose that she join the Avengers or get her own Marvel movie, and the worst posts likened her role to that of Wakanda, the advanced African nation led by the king T’Challa, who moonlights as the superhero Black Panther.

It’s not the first time white libs have looked to incorporate this part of Marvel lore into their understanding of what goes on at the highest levels of power in America, but you have to admit it’s extra awkward when the person they’re applauding is, in fact, Black. Not recommended. 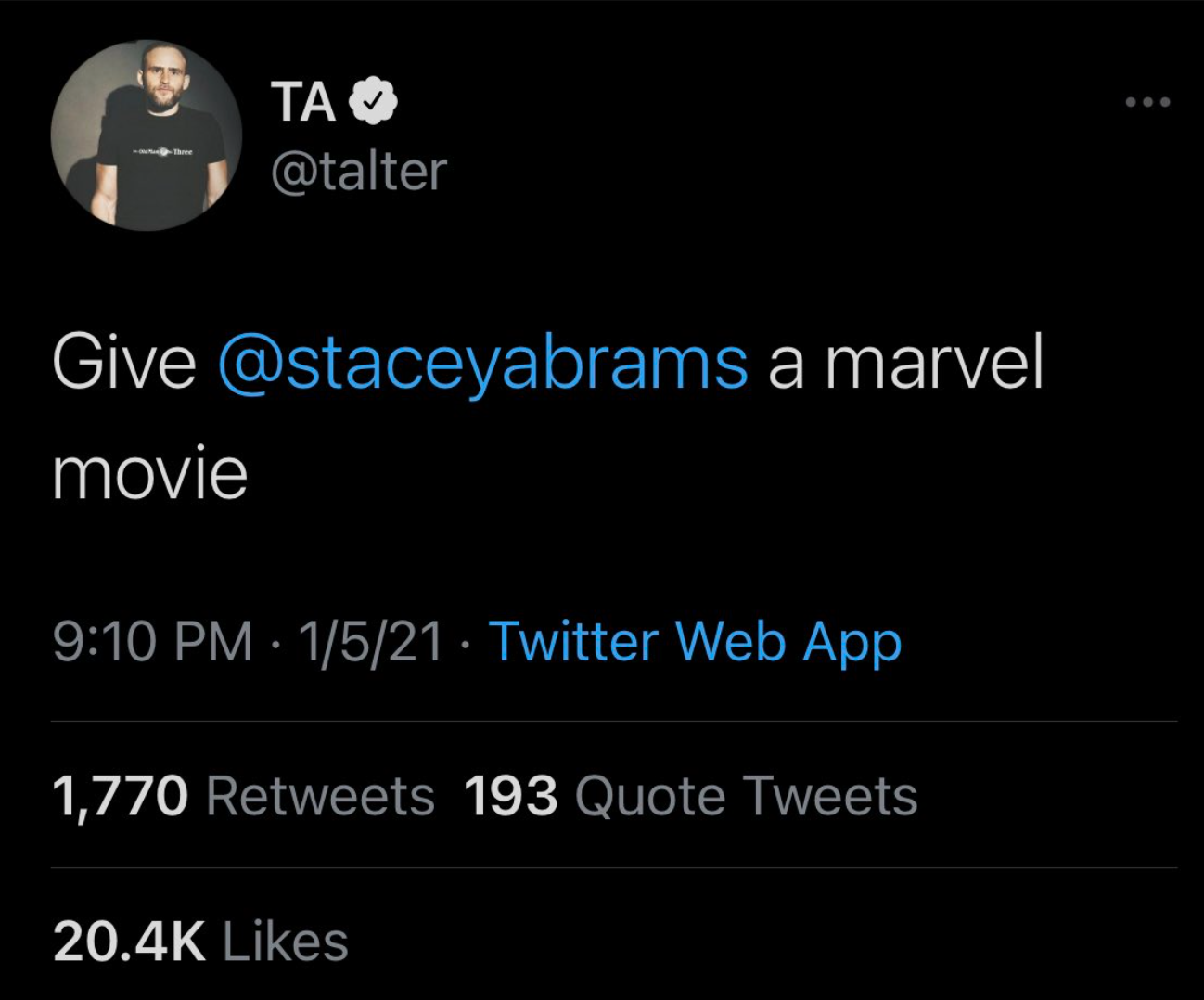 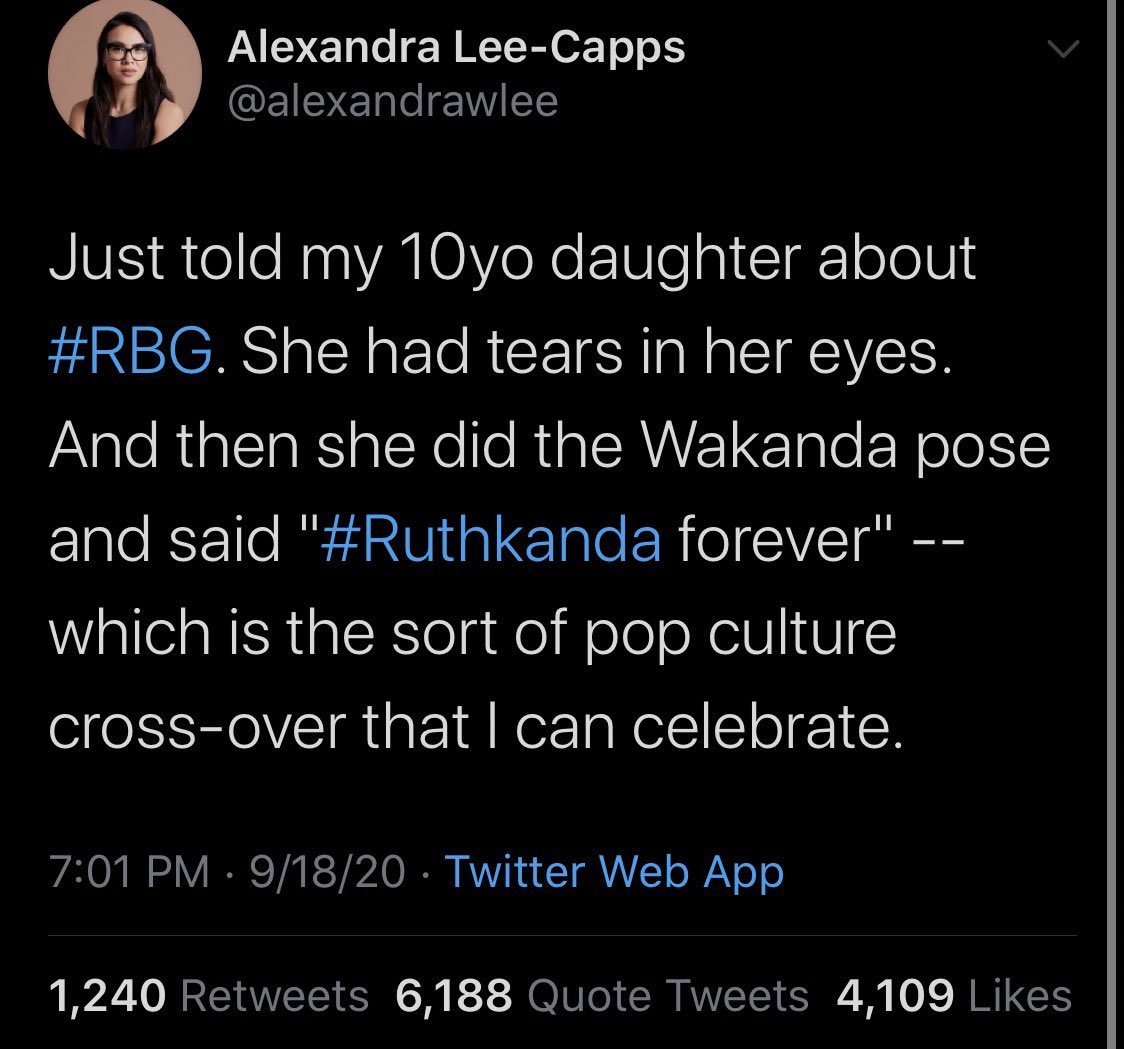 Anyway, I guess this is what we’re like now — we swapped one hyperdominant intellectual property for another, and are still stuck within the moral framework of fabulism geared to 11-year-olds. Could the eagerness to reduce an intricate, centuries-old democracy to cartoonish archetypes explain some of the overall dysfunction in that system? Maybe! Though, whether a symptom or cause of our troubles in this country, it reflects rather badly on the electorate. I’d beg these people to watch another movie, except then they’d switch over to the DC Universe, and I do not want to hear which senator is Batman and which is the Joker. Let’s just agree to take a couple more minutes’ reflection before we fire off our “this thing is that thing” tweets.

Or, whatever, keep getting dogpiled. I can’t stop you. That would take some kind of… superpower.