The manosphere is making a distant humanitarian crisis all about themselves

As the Taliban once again asserts control of Afghanistan, 20 years after the U.S. toppled their rule in response to al-Qaeda’s 9/11 attacks, the country’s women face deadly peril. Despite the militant group’s promises to soften their hardline stance against women’s rights and basic autonomy, reports claim they’re still engaging in public violence against them. Already, the region was rife with human trafficking. A month before Kabul fell, fighters beat to death a mother of four who could not afford to cook them the food they demanded of her. In early August, a female doctor received a death threat for giving birth control to a child bride. Zarifa Ghafari, one of the nation’s first female mayors, said she can do nothing but wait for the Taliban to kill her.

Meanwhile, thousands of miles away, Western men tell each other that Afghan women — whose tentative social progress over decades may be erased in a matter of weeks — are actually enjoying “female privilege.” Why? For the simple reason that some have managed to flee.

Sharing a Daily Mail article on how the U.K. will seek to grant asylum to women and girls, a user on Reddit’s r/mensrights board posts: “But the men left behind who fought against the Taliban will be killed.” (Nowhere, of course, does the piece say that men will be excluded from the resettlement program.) Below, a commenter argues that mainstream media ignores stories of men and boys murdered by the Taliban in favor of a narrative he summarizes as: “‘Oh women and girls won’t be able to study and work, their rights their rights [sic].’ He doesn’t stop there, either. “I AM TIRED of hearing about females,” he continues. On r/pussypass, which purports to share examples of women benefiting from the mere fact of their gender, another redditor mocks a call for mass evacuation of “women and children” with the caption “Because screw men, i guess.” 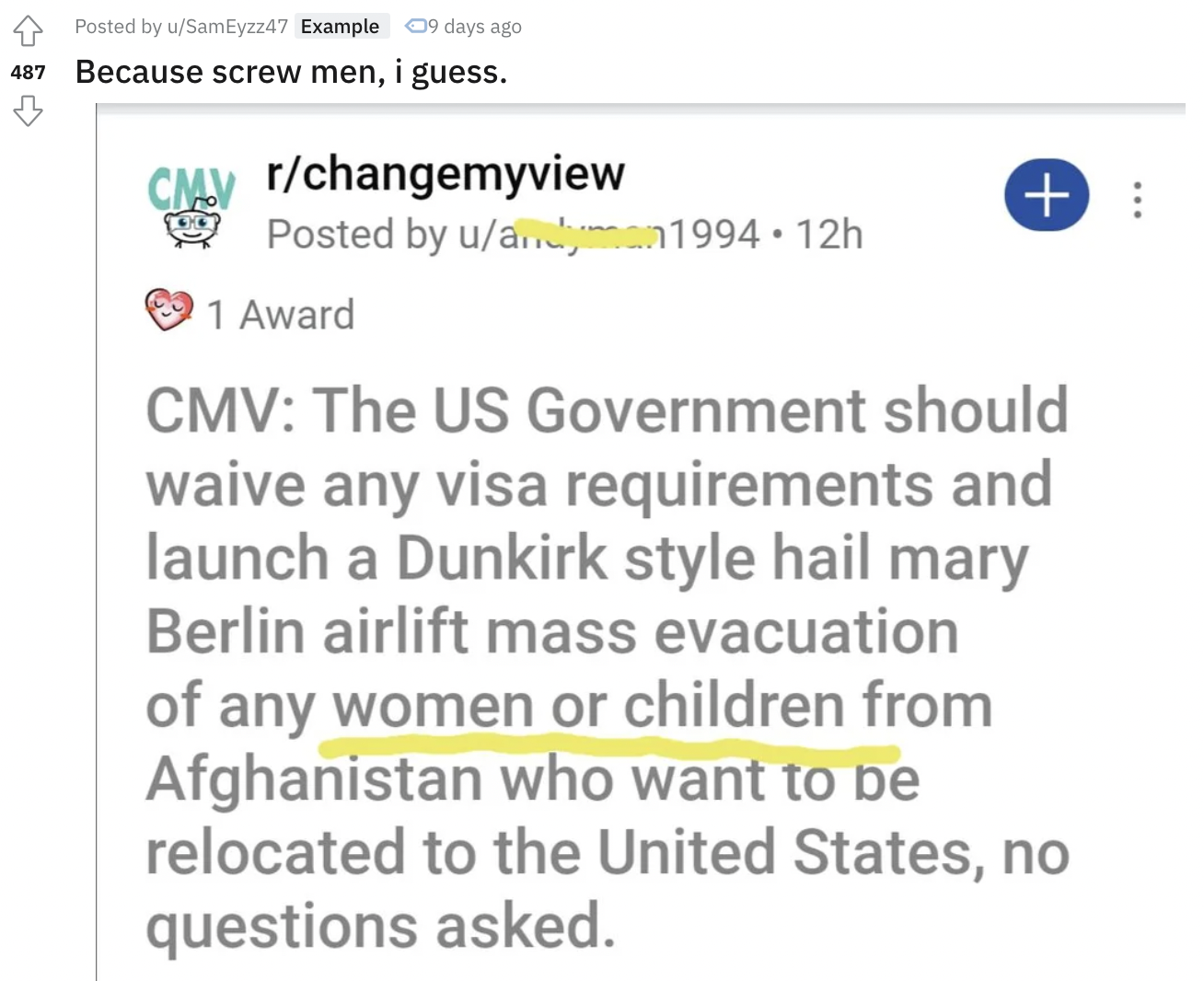 War is a threat to all life in its path. Men, women and children suffer and perish from it. But with enough distance from the conflict, it easily becomes an abstraction. And then it can be leveraged for a tedious debate that bears almost no relevance to the humanitarian crisis at hand. This has been the story of U.S. military invasions since World War II: lots of bad-faith takes about what’s happening halfway around the world from people who think foreign cultures only exist in the context of American politics. This is how the manosphere can come to the baffling conclusion that Afghan women, currently among the most vulnerable individuals on the planet, have somehow lucked out due to reverse sexism. 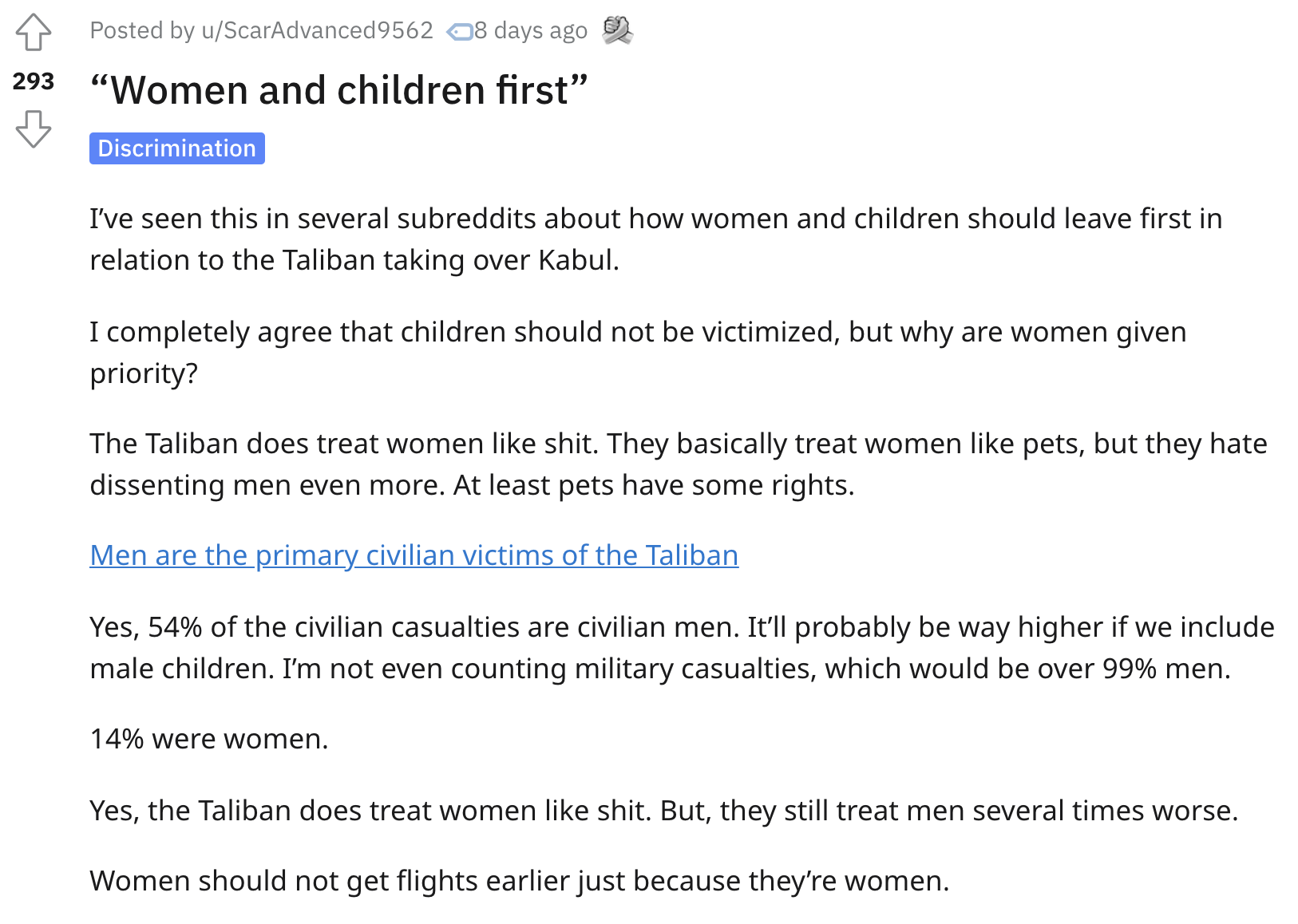 In truth, evacuations have been chaotic rather than rigidly biased; of the 28,000 or so to make it onto a plane thus far, many thousands have been men, who aren’t barred from leaving due to their gender, as some anti-feminists appear to believe. The prioritization of women’s rescue, moreover, is greatly exaggerated in misogynist corners of the web. On August 17th, U.S. News & World Report ran an article describing how senators were urging the Biden administration to extend humanitarian parole — an emergency amnesty for those otherwise ineligible to enter the country — to female leaders and activists now targeted for “kidnapping, torturing, and assassinations.” On r/mensrights, the link to this story was posted along with the false and inflammatory charge that the U.S. is “only looking to evacuate female leaders.” The accusation is doubly misleading in that the White House has largely failed to expedite the intake process whatsoever, either for women or men who may face retaliation from the Taliban in days to come. These guys, in denouncing “female privilege,” refer to a government policy that doesn’t exist.

Drilling down deeper, it’s clear just how myopic these complaints can be. Does it matter to a victim of a civil war how many fewer comments their story gets than someone else’s? How does any Afghan person gain safety or stability through the relative attention of Westerners waging their own petty social battles at home?

The gulf between our bourgeois concerns and the terror on the ground is rarely as clear as in a r/mensrights post that scolds the women of Afghanistan for not taking up arms against the Taliban themselves. “I can’t help shaking the feeling that this is all part of female privilege,” the rant concludes. “A women [sic] shouldn’t have to fight, or do energy exploration, or build things. A man should do that for her. A woman shouldn’t have to risk her wealth or spend 60 hours a week building a company.”

In three short sentences, the author drifts from the specific reality of violent oppression to the insinuation that women are too lazy to start a small business. But Afghanistan wasn’t plunged back into turmoil by its lack of female entrepreneurs — it has been repeatedly demolished through the imperial folly of men. As for the women who did lead the movement for equality, well, they simply can’t win in the calculus of the anti-feminist: What they accomplished wasn’t enough to change the course of history, and yet, they were so important as to invite savage reprisal, which supposedly puts them first in line for a visa, demonstrating that women have held true power this whole time? It’s a paradox even some MRAs can’t endorse. “How is it privilege that they are raped and tortured and sold as sex slaves?” a redditor asks downthread. “This has nothing to do with ‘men’s rights’ […] this is just fucked.” Another man emphatically agrees: “Like stop trying to conjure up fake men’s issues and victimhood. It is the AFGHAN PEOPLE that are suffering.” And a third is quite succinct in his rebuttal: “Bro no… no one is privileged there.”

These men have bought into myths of their eternal disadvantage. If they can still reject the idea that women abandoning a homeland to survive are better off than them, it comes as a relief, however tiny. It shows there is a lower limit to their cynicism. Perhaps we climb up from there.