A Horrifying Look Inside ‘Untouchable’ and ‘Leaving Neverland,’ Why We All Sound So Pissed Over Email and the Crack Cocaine Weight-Loss Diet

This is what makes my job so very hard, you guys. There can only be one “Must Read” each day, and while I’d be crazy not to tell you that a dude smoking crack (and nearly dying) in an extremely futile attempt to one-up his best friend is the categorical definition of a“Must Read,” I’ve already picked the “Must Read” for the day, below. And, like I said, there can only be one. (I MUST NEVER BREAK THE RULES.)

Ah, screw it. Must Read 1A is at the bottom — but you gotta promise to get through everything else first.

“Michael Jackson and Harvey Weinstein Were the Perfect Monsters”
The experiences laid out in excruciating detail by the victims of alleged abusers Harvey Weinstein and Michael Jackson in the new highly anticipated documentaries Untouchable and Leaving Neverland paint a horrifying picture of both sexual abuse and the abuse of power. While their methods of coercion were different — Weinstein bullied, Jackson brainwashed — their goals were the same: Prey on those who were too inexperienced to know better, count on their victims’ silence and rely on protection from a system too invested in their success to reign in their monstrous behavior. READ MORE

The Tempest on the Teacups

If you’ve been to Disneyland, you might have seen them: Packs of burly men in Mickey Mouse-patched biker cuts roaming the promenades, riding the rides and generally wilding out. These are the members of Disneyland social clubs, and they’re unabashed in their enthusiasm for all things Disney — even if it occasionally means running afoul of park security. But the way they’re perceived by the park’s other guests is a different story, and one that may make their continued existence untenable for Disneyland’s powers-that-be.

Chill Out on the Burnout

Put, that coffee, down. You might be far too jacked up on work to do your job well, and it’s killing your chances at success. That’s the message that Bryan Robinson, author of #Chill: Turn Off Your Job and Turn On Your Life, wants you to hear. #Chill is his attempt to help the stressed-out, overworked masses find their (you guessed it!) chill, and Tierney Finster recently spoke to Robinson about how being chill is as much a state of mind as it is cutting back the hours you work.

There’s a special circle of Hell for email. No, really: 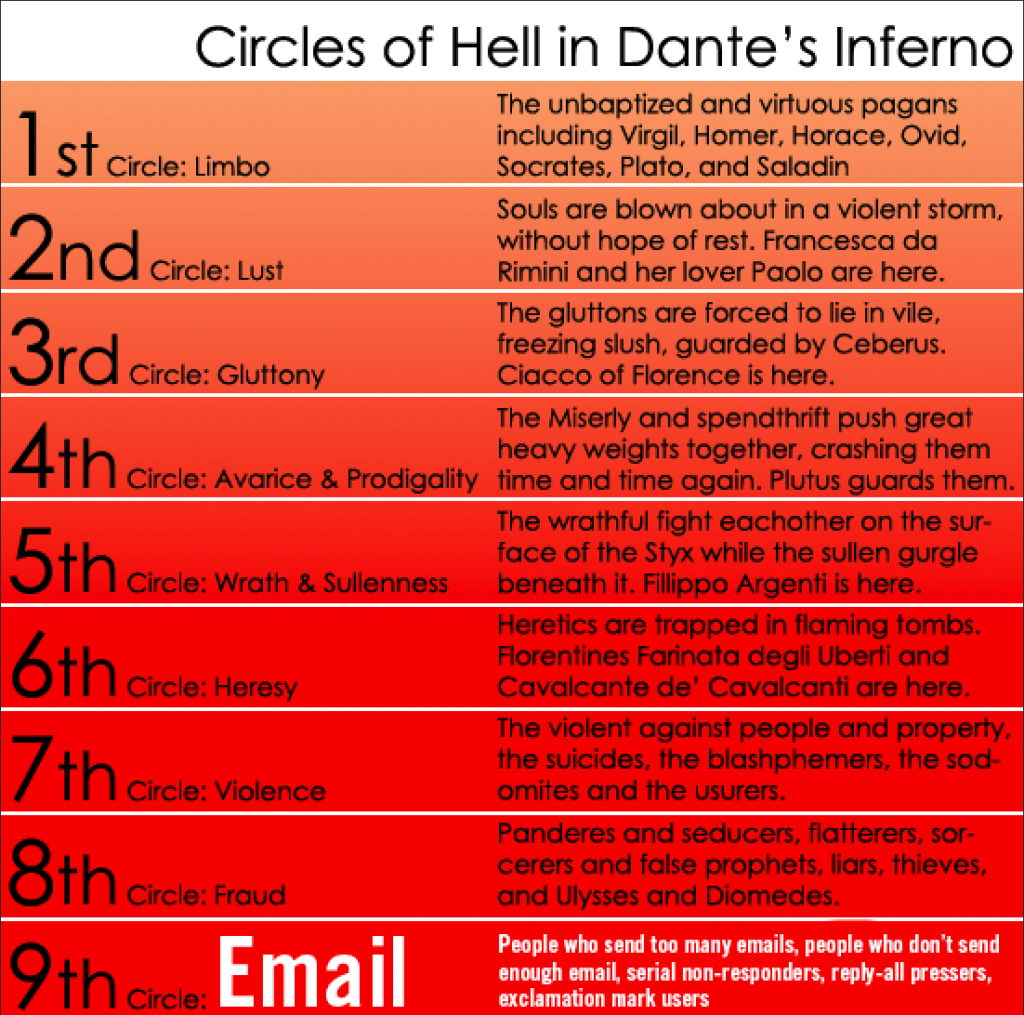 Jokes aside, email truly is the fucking pits. We were somehow convinced years ago that it was this, like, really efficient way of doing business, the wave of the future, when in reality, it is and always has been a digital representation of our collective bondage:

And now that we are fully aware of its total and complete suckage, we’re super-pissed we have to use it — so pissed, in fact, that “pissed” is now the default tone of all email.

I’m so jaded now by the processed-food world we live in that I assume even the most innocuous-looking snack has 30 ingredients, 10 of which will give me cancer. But Cheerios, toasted-oat circle king of the cereal brands, is a rather surprising outlier. It has only six:

Does a lack of Yellow #5 or Red #3 mean that Cheerios might actually be good for us? Well, kinda, yeah.

The ability to casually reference your significant other without seeming awkward or conceited is a special skill. It’s particularly important in conversation with the opposite sex — because you’re still a person who can enjoy talking with other women, but you also don’t want to seem like a skeeze. Here’s how you drop the hint that you’re taken like the gentleman that you are.

When a ‘Drink’ Is Not Just a Drink

“Just one more.” One more what? The serving size of a “drink” of alcohol is as detached from reality as Häagen-Dazs’ definition of a serving size — that is, it’s way different than what you’re probably consuming. No wonder doctors are doubling whatever you tell them when they ask you how much you drink each week.

This just in: We’re fucking up the Earth. Not just with how much oil we’re extracting, or how much carbon we’re putting in the air but also with what we’re eating — the amount of food, the types of food, and of course, how much we’re throwing away. In fact, the way we’re going, feeding the 10 billion people projected to inhabit the planet by 2050 will be virtually impossible.

Thankfully, much smarter people than you or I — you know, scientists — have nerded out and created a plan for an environmentally friendly “planetary health diet.” Here’s how it promises to meet our nutritional needs without exceeding “planetary boundaries.”