They’re gentle, upbeat and almost certainly have a dolphin tattoo. But beneath their wholesome exterior, they’re nothing more than used car salesmen

For part of my childhood and early teen years, I attended Bible summer camps, weekly Bible studies and an annual overnight evangelical event called “Reverb: Word of Life.” The event began with a professional hockey game in Springfield, Massachusetts, after which a handful of pastors over-enthusiastically spoke to us about the gospel and made us promise to share the word of Christ with at least a dozen people. We then went to a bowling alley, ate pizza and spent the rest of the night at an indoor soccer field facility filled with bounce houses and games. The website describes the event as “an insane all-night event with a single goal: to share the Gospel with unsaved teenagers!”

At 12 or 13, I probably did find the event to be “insane.” But now, as an adult, I realize that I was being sold a set of evangelical values that even then I didn’t agree with. Looking back, it feels like a bait-and-switch, a phoniness that many people are now identifying as “youth pastor energy” on TikTok and Twitter.

Youth pastor energy describes a particular type of (usually white) guy who tries overly hard to be earnest, but in doing so, he doesn’t seem earnest at all. He uses outdated slang to appeal to “the youths,” riffing on memes at the end of their life cycle, shopping at H&M and playing an acoustic guitar as if it were a ukulele. There’s a good chance he has a hemp bracelet and a single, deeply meaningful tattoo, and his gentle voice and proclivity for pep talks makes him seem like he’s always on your side. Through it all, however, it’s clear that he’s selling something, though his wares are intangible. 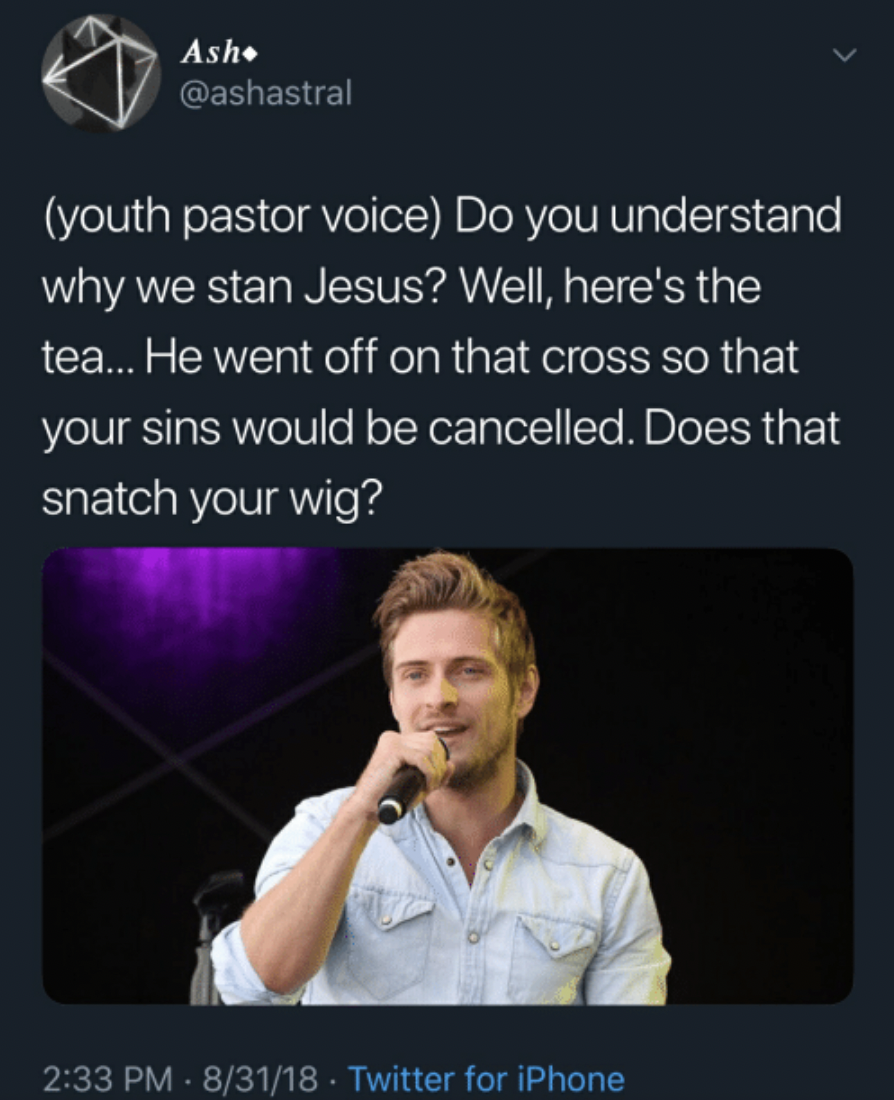 People with “youth pastor energy” are, of course, predominantly youth pastors, particularly those you’d find at big, new-age-y evangelical churches. Carl Lentz, the disgraced former pastor of Justin Bieber and celebrity megachurch Hillsong, is one famous example. It’s also been ascribed to celebrities like Shawn Mendes, mostly for his lukewarm sense of style and charisma, and Chris Pratt, for his actual evangelical values. Tom Brady also has it, apparently, as does Beto O’Rourke.

On Twitter and TikTok, this general vibe is often called out, though it can be hard to clearly define, particularly if you’ve never been part of an evangelical church. Last year, Junkee writer Joseph Earp described the “unique horror of the youth pastor” as having “upbeat yet insidious energy.” According to his expert analysis, they’re like “himbos crossbred with a scorpion — both wholesome and clearly dangerous.”

Mac McCann, a social media strategist in Austin who has studied religion and grew up in the evangelical community of Dallas, tends to agree. “The core features of youth pastor energy basically overlap with the ‘How do you do, fellow kids?’ vibe that so many brands are known for,” he tells me. “It’s cringe from someone outside of the demographic trying to appeal to people by appropriating popular culture to promote their beliefs.” As evidence, he cites the pastors at Watermark, a Dallas megachurch that has revoked gay members, and the musicians affiliated with it like Patrick Ryan Clark.

As many of the TikTok parodies about youth pastors describe, the beliefs that are being peddled are often toxic ideas about purity and sin, whether that be through painful metaphors comparing premarital sex to burning your mouth on hot pizza or the constant reference to a pastor’s own “smokin’ hot wife.” More than that, these cheap lectures and sermons are often part of a larger grift not simply to get you to join the church, but to contribute politically and financially to the evangelical movement more largely.

But, as the King of the Hill episode “Reborn to Be Wild” expertly demonstrated, using things like skateboarding and rock shows oriented at 12-year-olds isn’t a great strategy for converting heathens into pious believers. “Can’t you see you’re not making Christianity better?” Hank says to Bobby’s long-haired, tattooed, skateboarding youth pastor after he tries to recruit Bobby to play in a Christian rock show. “You’re just making rock n’ roll worse.”

“Youth pastor energy” feels the same as bank advertisements using the word “cheugy.” They might know some of the words the kids are using and can pretend to be part of the in-crowd, but at the end of the day, they’re still trying to get you to subscribe to a hegemonic cultural force for their benefit, not yours. As McCann mentions, there are plenty of excellent youth pastors out there whose honest goal is to help others find a sense of peace and happiness, but they don’t need “youth pastor energy” to do it. Religious conservatism needs a hip veneer to market itself, but authentic love and community doesn’t require branding.