The resistance to scooping is just too strong

Sometimes, when I’m feeling too optimistic, I think about dog shit. I’m a dog person, and I live in a neighborhood full of dogs, which is great — though this also means my Nextdoor feed is crammed with posts from neighbors having absolute meltdowns about the unscooped poop on the sidewalks and their lawns. It’s fascinating how they treat it as a new or worsening problem, and themselves as the primary victims.

“WHO are these people who seem strong enough to walk their dogs but can’t seem to be able to pick up after them?!? It’s disgraceful!” wrote one angry man this summer, setting off a thread of incensed agreement. The next day, he announced he’d installed a surveillance system on his property. “I can now send incriminating video to the sheriff, not only for my house, but across the street, too!” he crowed in triumph.

Imagine thinking you’d solved, once and for all, the dog poop epidemic. Wild! That shit’s never going away, sir, and you’ll be lucky if the sheriff’s department doesn’t block your phone number after the first few calls. I’d offer a similar prediction to residents of Kirkland, Washington, a Seattle suburb reportedly fighting a doo-doo scourge of their own. City officials there have embarked on a research-and-shaming campaign, measuring the volume of local canine waste — about 6,000 pounds daily from 20,000 pets, they say — and planting a small yellow flag wherever an abandoned doggie dump is found.

Congratulations, your park looks like a college art student’s C+ final project. The dog owners who don’t bag won’t even glance up from their phones to notice this kind of passive-aggression. That’s really, truly not how any of this works!

Oh sure, let’s get a bunch of Roomba-type robots crawling around to detect and remove dog shit. That’ll do the trick, just like the Twitter bot that catalogs every 311 complaint of street poop in San Francisco. I mean have you been there recently? The sidewalks are sparkling clean. I’m kidding, of course; at this point we should cut our losses and turn the entire Bay Area into a septic tank for the surrounding region. I seriously don’t understand how we envision ourselves beating climate change when our best idea for eliminating mounds of crap in pedestrian areas is, like, a sign that says “POOP Happens… Just Not Here, Please!”

Because you know what? Dogs can’t read. They don’t speak English, either, so we cannot impart this polite warning, nor take them to the vet to have their assholes permanently sealed up in hopes of avoiding a fecal faux pas that would get both owner and animal shamed on social media.

All this boils down to is class warfare: My home is in a nice, expensive residential zone, and your domesticated creature should only be relieving itself in the squalor of someplace with lots of crime and public housing.

Though I suppose we have to credit the many dog owners who refuse to clean up for keeping the conflict going, and not always for the reason of sheer laziness: One of the best posts I’ve seen lately on Reddit’s r/insanepeoplefacebook, which is exactly what it sounds like, is a screenshot of a person asking for help with their 4-month-old Yorkie. “She poops all the time!” they moan. Okay, maybe it’s a troubling medical issue there — doubtful your Facebook friends will supply an accurate diagnosis, but whatever. Then it takes a turn for the mind-boggling, as this genius reveals they weren’t previously aware that dogs poop whatsoever: “It’s so crazy, I thought dogs weren’t supposed to have bowel movements. What is going on?”

Folks, do you think any of that little Yorkie’s outdoor droppings have ever made it to a trash can? Her human seems barely capable of remembering to breathe, let alone flipping a plastic bag inside-out. 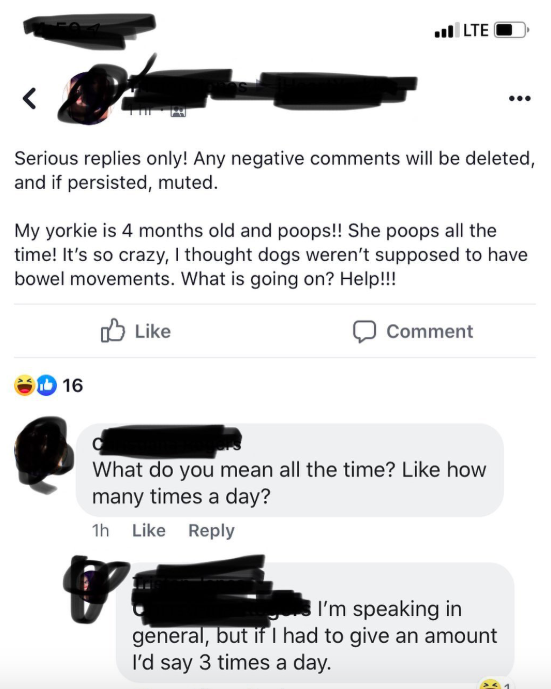 Yeah, we’re gonna have to take the L on this. It’s not to say we shouldn’t be educating or pressuring dog owners to keep public spaces clear of Toto’s turds, of course; we simply ought to be realistic as to the outcome when we, as a species, are so careless and stupid. It may be the case, too, that if our quality of life improves, we’re more apt to expect someone else to deal with all the dung. That’s the story in France, a nation of inveterate poop-leavers who seem to regard it as a matter for the state, not individuals. “They say, ‘I pay my taxes, so you should pick up our shit,’” as one frustrated bureaucrat put it. Feels safe to say plenty of Americans go by the same logic, if they rationalize it at all.

In the morass of the Nextdoor dookie debates, I did find a comment that summed up everything beautifully: “Over the years there have been dozens of threads here about dog feces and literally thousands of responses,” a woman observed. “Some people put up signs, others put out bags. People complain about bags of poop in their trash cans, others about unbagged poop. And nothing changes. People who don’t pick up after their dogs know they’re supposed to. They just don’t care.” Naturally, this insight went ignored.

Oh, well. I guess the retirees and busybodies need to stay engaged in (and angry at) their communities somehow, and if they want to torture themselves with fantasies of a poop-free world, it’s none of my business. Better this than devising new ways to fuck with the homeless, anyway. I wonder if anyone has trained a toy poodle to use a litter box. Get on it, science.