It’s one of the most depressing experiences: You love a particular movie or TV series, only to watch it suddenly crash and burn when the sequel (or next season) comes out. How much more would everybody revere The Matrix if they hadn’t made two more movies? Remember what a great show Unreal was before …. it wasn’t anymore? Nothing can be fantastic forever — the novelty fades, inspiration gives way to the lure of an easy paycheck — and yet, it still sucks when your favorite entertainment property starts to turn bad.

Every once in a while, though, a once-good phenomenon pulls itself out of a nosedive. That certainly seems to be the case with True Detective, which returns to HBO on Sunday. According to early reviews, Season Three is a return-to-form after the disastrous Season Two: If the new episodes, which star Mahershala Ali as an Arkansas cop, don’t quite match the brilliance of the original 2014 season, well, at least it’s an indication that fans’ devotion to True Detective hadn’t been misplaced.

That sort of course correction is an anomaly, but it happens just enough that you’re reminded it’s possible. Is there any better explanation for why I keep watching Saturday Night Live? Now in its 44th season, the venerable NBC sketch show will never, ever be the phenomenon it once was. But with the right cast during the right cultural moment, SNL can still be essential television. That was certainly true of Season 34, which began a few months before the 2008 presidential election. This was the season of Tina Fey as Sarah Palin, and it seemed like on a weekly basis the former head writer was delivering another perfect, devastating impression of the dimwitted vice-presidential candidate.

Saturday Night Live didn’t win the election for Barack Obama, but the show was energized by the cultural forces that would lead to his victory: the anger at the Bush years, the amazement at Palin’s not-ready-for-primetime candidacy, the “Yes we can” hopefulness of Obama’s message. For a few months, SNL actually lived up to its promise of harnessing the spirit of the times while also being really funny. It rarely happens anymore, but I remain open to the possibility it could happen again.

Below, other members of the MEL team offer their picks for the best Lazarus acts in pop culture. Don’t let us down, True Detective: We’re counting on you.

I always say that Dexter is the dumbest show I’ve watched from start to finish, and I think that has a lot to do with its trajectory. The first season is a solid, self-contained story about a serial killer who only hunts other killers — also, he’s a forensic analyst for the Miami Police Department’s Homicide Division, so what’s not to love? A+ trash here. But that high-wire act couldn’t keep its balance, and the next two seasons were a schlocky mess, if still sometimes a guilty pleasure.

After Jimmy Smits’ goofy-ass guest arc in Season Three, it seemed like the series was beyond salvage. What a shock, then, to have John Lithgow turn up for Season Four as Dexter’s most chilling, elusive nemesis, the Trinity Killer. The comedically gifted character actor went stone-cold for an Emmy- and Golden Globe-winning performance that placed him among the great TV villains of all time, overmatching our antihero in spectacular fashion and more than making up for any weak spots in the script.

Season Five continued this dark, well-acted franchise revival with a Julia Stiles-led storyline that challenged Dexter’s blood code in novel ways. Then, from Season Six through the breathtakingly stupid series finale, it was back to the corny pulp we saw during the earlier stumbles. But for a while there, the people steering the ship remembered what grisly fun this premise could be. — Miles Klee, Staff Writer

Believe me, I’ve talked enough shit about Girls for a lifetime, but I also love certain episodes of the show. Girls explored female identity and relationships in a ridiculously myopic way, but given the lack of stories about young women actually created by young women on TV when the show began in 2012, it was exciting for my college roommate and me to watch.

However, by Season Four, when Hannah leaves New York City to attend the Iowa Writer’s Workshop, I suddenly no longer wanted to watch Girls or attend graduate school. Believe me, I like navel-gazing. My navel is super interesting. Hot even. I gaze at it all the time. But this level of boring wasn’t suitable for television.

The Season Four slump was so real that I protested watching the fifth season all together, until a friend told me Bridget Everett was guest starring in its premiere. As it turns out, this episode, “Wedding,” became my favorite of the whole series. In large part because of Everett’s hilarious portrayal of a heavy-handed makeup artist/hair stylist. A one-woman glam team, if you will. Just seeing her wield a flat iron still makes me laugh, and her character’s out-of-place whimsy in relation to Allison Williams’ uptight bride is great.

In the end, Season Five, imho at least, is the best season of the show, so I guess it’s a good thing I kept watching. That said, Season Six… sucked. — Tierney Finster, Contributing Writer

I fucking love The Wire. I’m not sure there’s ever been a show with characters as fully and uniquely realized as Snoop, Marlo and Stringer Bell. The first season is incredible. The third season might be one of the best ever.

That second season tho?

Don’t get me wrong, the 12 episodes when The Wire decided to go slumming with the stevedores in the Port of Baltimore is still heads-and-shoulders better than any other show. But, I’m sorry, who gives a shit about characters like Frank Sobotka and The Greek when “Omar comin’”? — Jeff Gross, Social Media Editor

I definitely wouldn’t consider myself a horror movie buff, but I do know that I’m a big fan of the 1978 original Halloween film. I’m also not good enough at writing to break down why I don’t like the other movies in the series but really liked the 2018 installment from David Gordon Green and Danny McBride. So instead, I made this graph that clearly shows my feelings. — Sam Dworkin, Senior Designer 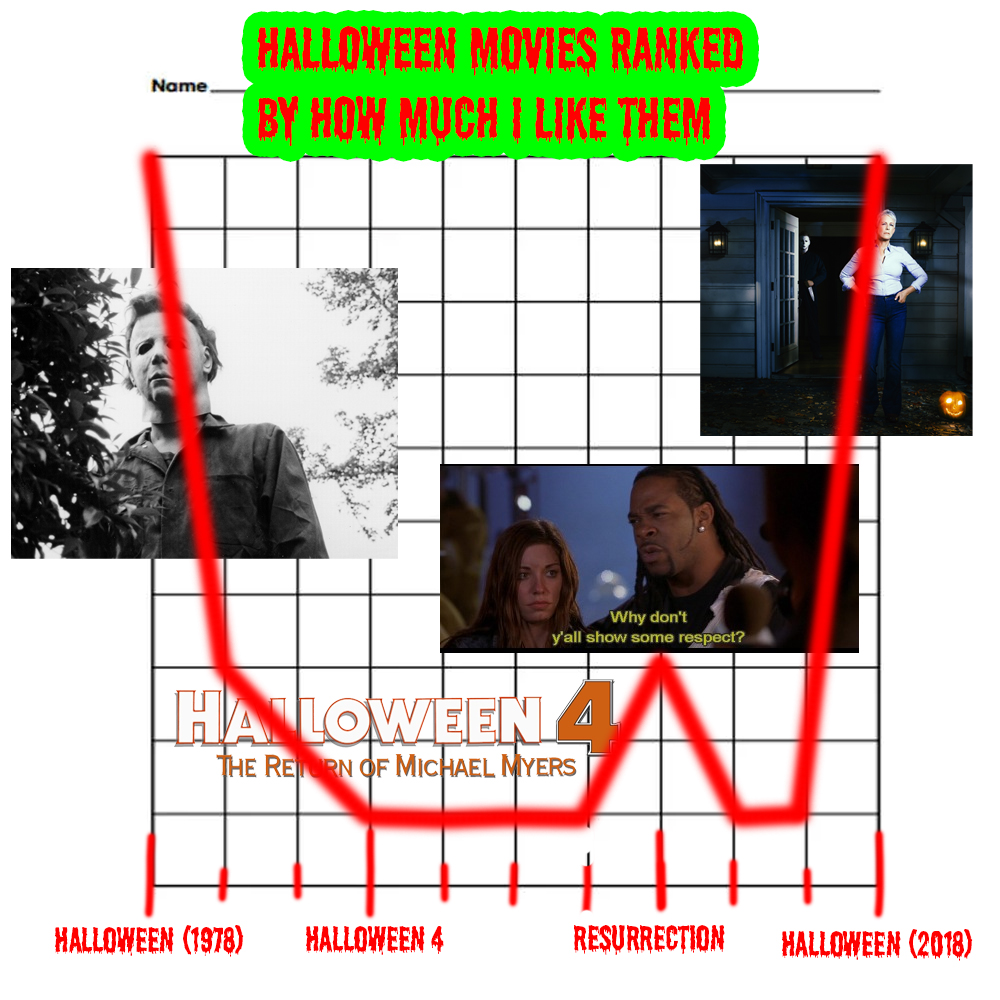