Thotting at the End of the World

When the country is a giant dumpster fire, it can be difficult to discern how to show your ass without showing your ass

When comedian and thirst-trap aficionado Kerryn Feehan let her long-time friend, photographer David Lawrence Byrd, into her Chinatown apartment in mid-July, it was the first in-person photo shoot either had participated in since the pandemic hit. Masked and properly socially distanced, the funny/sexy shoot only took about 20 minutes. As they were about to wrap, Byrd tossed a spare mask to a scantily clad Feehan, who placed it in between her legs. The resulting photo could make even the staunchest Trump supporter reconsider their anti-mask sentiment. 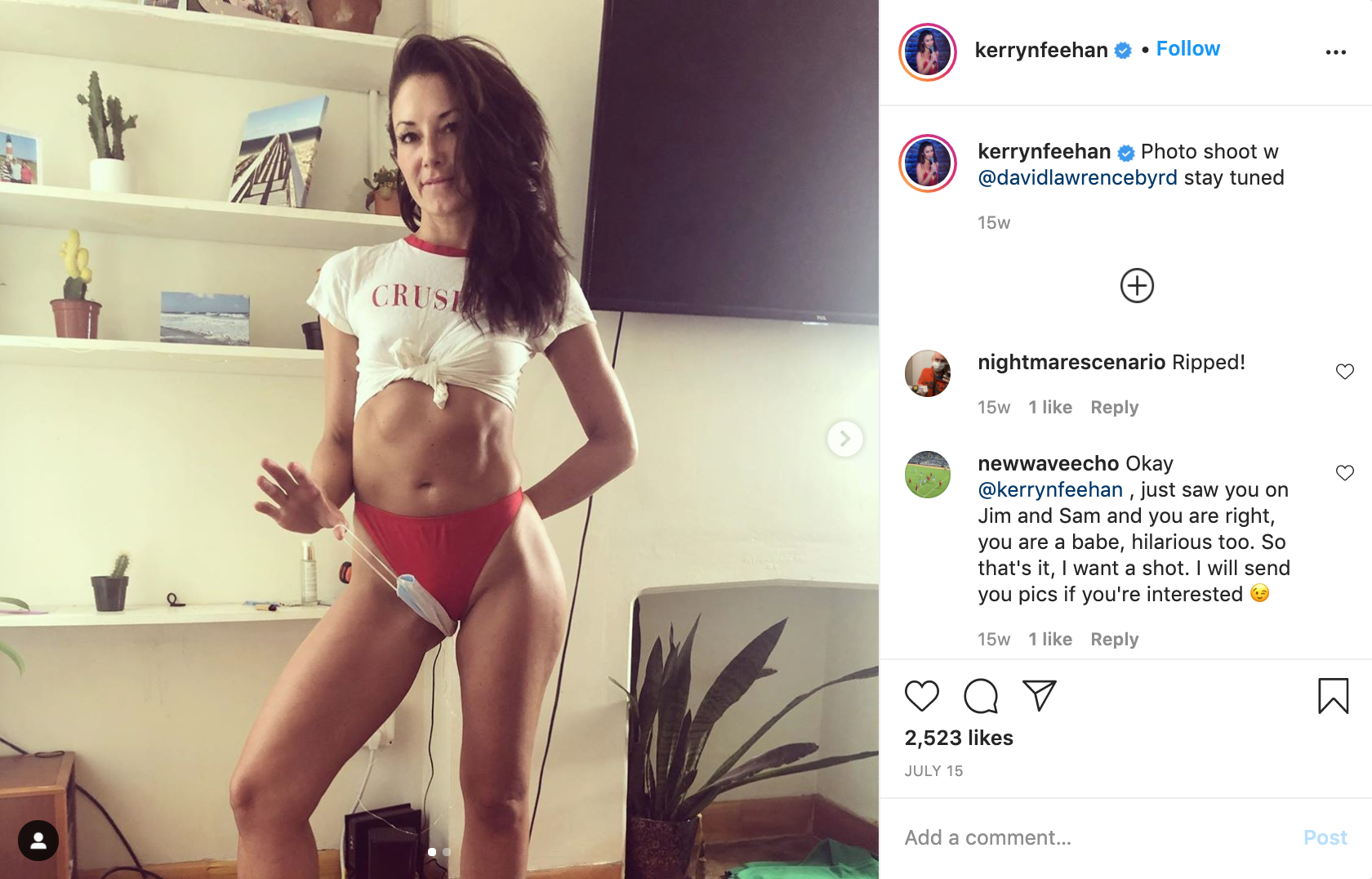 Welcome to apocalypse social media, where people need thirst traps more than ever to preoccupy themselves, and yet no one knows if it’s really appropriate to show their ass while the world is burning. From celebrities to influencers to everyday thots such as myself, there has been a clumsy shift toward posting thirst traps with captions that tell people to vote, donate to Black Lives Matter or wear masks. The idea is that sex sells and sexy pics are more likely to be prioritized by the algorithm, giving visibility to serious causes that typically struggle to gain traction online.

Obviously, this is far from a new phenomenon, with the tradition of using sex to sell products dating back to as early as 1871 when Pearl Tobacco put a picture of a “naked maiden” on a pack of cigarettes. Since then, showing skin has become an essential strategy of the advertising industry, selling everything from soap to clothes. The only difference now is that thanks to the rise of social media, smartphones and the general attention economy, consumers are the products.

But as much as sex sells, it also pisses off a lot of people to see others gain personal clout under the banner of social justice. “Some activists have criticized the nature of thirst traps because they compete for social media attention with existential issues like Black Lives Matter and climate change,” Chelsea Reynolds, an assistant professor of communications at California State University explains. “[But] in order to coexist with social justice content, thirsty netizens can’t play apolitical, lest they be labeled Trump sympathizers.”

The pressure to post what Reynolds calls “social justice thirst traps” predates the pandemic, with trends like #HotGirlsForBernie. But now that the pandemic has forced us online practically 24/7, they’re inescapable. Take, for instance, Michael B. Jordan “sexily” advocating to get out the vote, or influencer Tana Mongeau’s #bootyforbiden campaign, which called for proof of a vote for Biden in exchange for a free nude (the post was deleted after her verification status on YouTube was temporarily removed amid accusations of vote-buying). 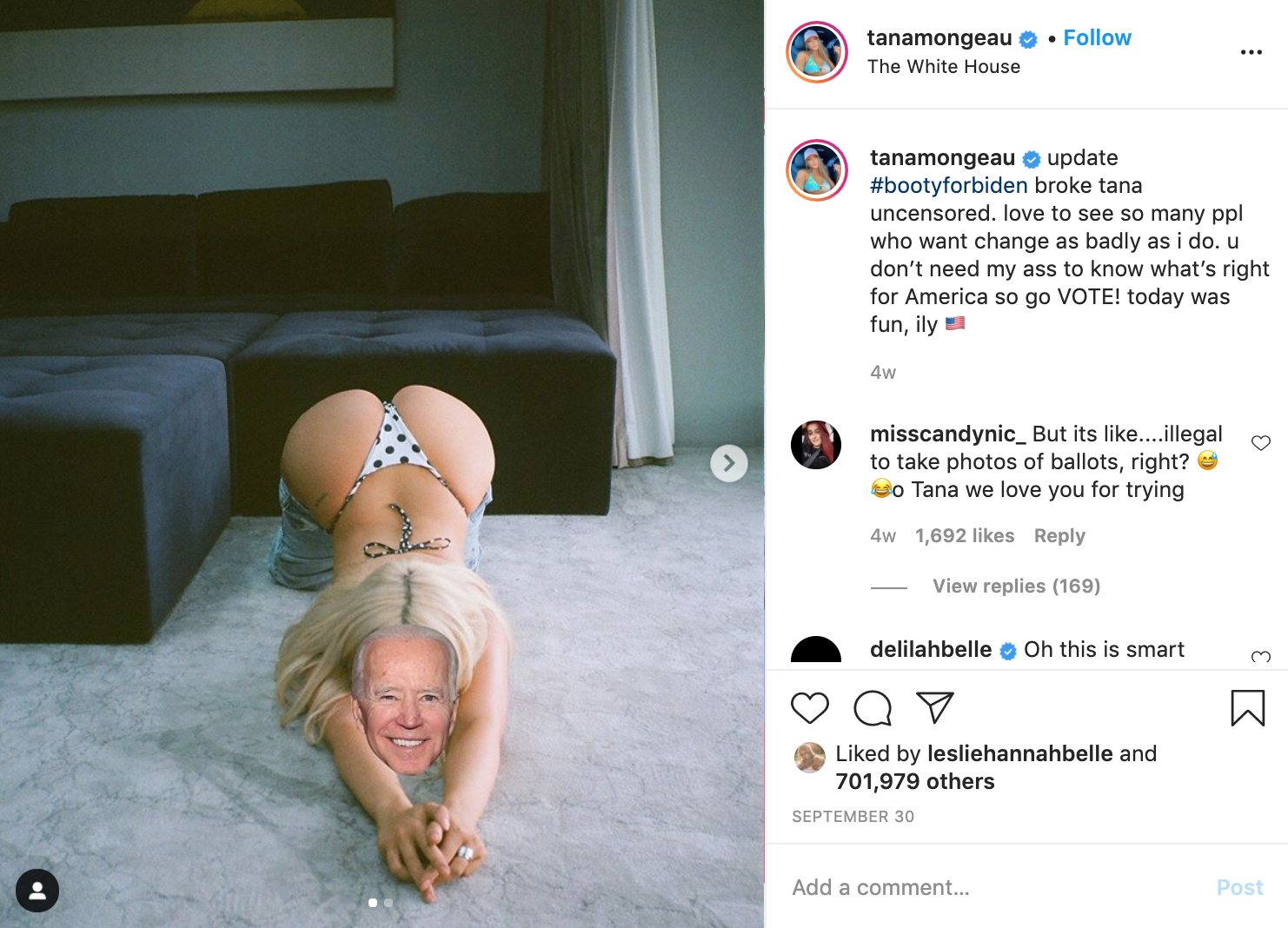 Additionally, mask thirst traps have become the only responsible way to thirst trap in a public bathroom — at least from a public health perspective. Even Ruth Bader Ginsburg’s death provoked thirsty posts for the late justice. “We’re all aching for social connection, and thirst traps remind us of simpler, better times, when a midnight kiss with a stranger was still possible,” Reynolds says. “When so many of us have turned into couch potatoes, there’s something nostalgic about liking — or hate-liking — a stranger’s six-pack.”

Outside of a few studies on the psychological benefits of selfies — as well as the impulses that compel so many people to post them — academics like Reynolds largely focused on the negative effects of social media prior to the pandemic. However, the past six months have forced them to question these previous findings. “A year ago, I would have had a different perspective. To be honest, I thought thirst traps were tacky, even a little sad,” Reynolds admits. “But now, thirst traps are a welcome relief to those of us who have made a hobby out of doomscrolling.”

Some research shows that increased social media use during lockdown can increase depression. That study and others like it, however, have primarily focused on the spread of misinformation, which, of course, is an important pursuit, but one that tells us little about thot etiquette beyond that we should steer clear of QAnon-themed thirst traps. Outside of extrapolating from old data that suggests people who post when they already feel good about themselves experience the most benefits, no one really knows how to make the most of thirst traps in these times, and many attempts to do so read as awkward at best.

Perhaps the most pervasive of these missteps have been Black Lives Matter thirst traps, which Feehan admits to dabbling in, even though she’s unsure how to strike the right balance as a white woman. “I want to help, but I don’t know how,” Feehan says. “When I posted one of my butt-swipe pictures, I put the GoFundMe for Breonna Taylor in my bio and kept it there for a long time.”

Not surprisingly, not everyone agrees with Feehan’s approach. Jade, a student and activist who lives in Dallas, thinks thirst traps don’t belong in the Black Lives Matter movement at all. “I personally believe no matter the race [of the person posting], it feels out of touch to post a thirst trap and attach BLM to it,” she tells me, noting that some influencers seem to cynically do so in order to increase engagement by provoking debate in the comments. “It gains traction, but when the message is attached to such a controversial topic, it seems performative.”

But to other BLM activists like Chicago-based drag queen and bodybuilder Miss Toto, it’s far more offensive to keep posting thirst traps without acknowledging the movement at all. “What I didn’t like was at the peak of the movement, how people, specifically white gay men, were acting like nothing was happening and just posting their thirst traps without a care,” she says. It pissed her off so much, she started posting BLM resources in the comments (and called for others to do the same). Overall, she believes there is a way to balance thirst with information and resources people may not otherwise encounter in their feeds; it’s just that subtlety is key. “There is a difference between posting a thirst trap with a resource document, especially when it’s tasteful, versus posting a hole pic and saying ‘Justice for Breonna Taylor.’ That’s not cute,” she says.

As she points out, this mostly means supplying and linking out to BLM resources, but not using BLM key words, names and hashtags within the thirst trap itself. “I saw a lot of ‘Justice for Breonna’ thirst-trap photos from all types of people, and none of them made sense to me,” Miss Toto says. “Her death was made a meme and having it in tiny print over your left nipple does nothing to get her justice nor any of the Black people that are living in fear in America.” 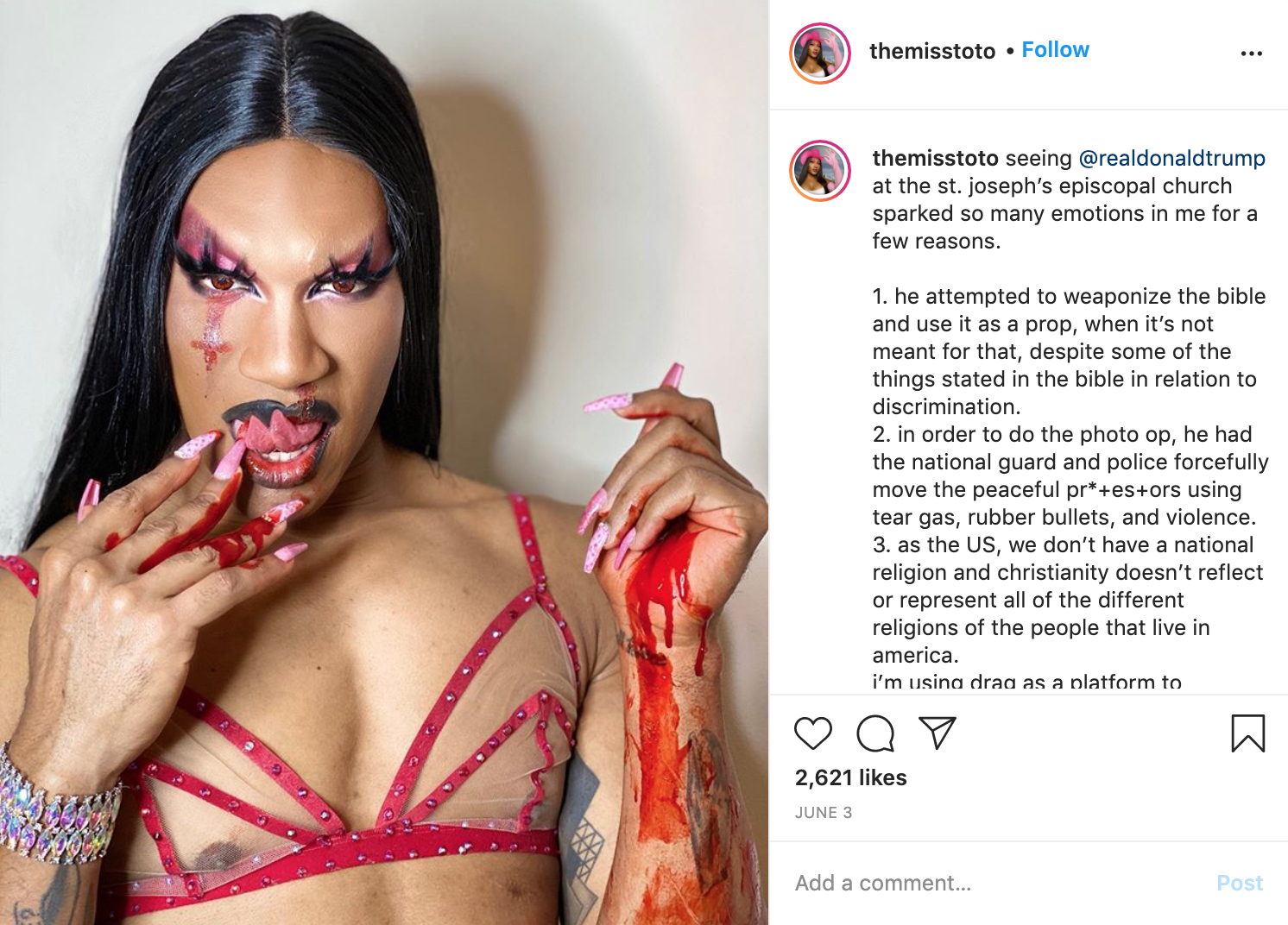 Silence, though, isn’t an option either. “You may have an account based solely on your looks, but that doesn’t mean you can’t change a mind or engage at least one person,” Miss Toto adds. “If these people consider themselves to be influencers, they need to do some influencing on the social media platform with all of their followers.” 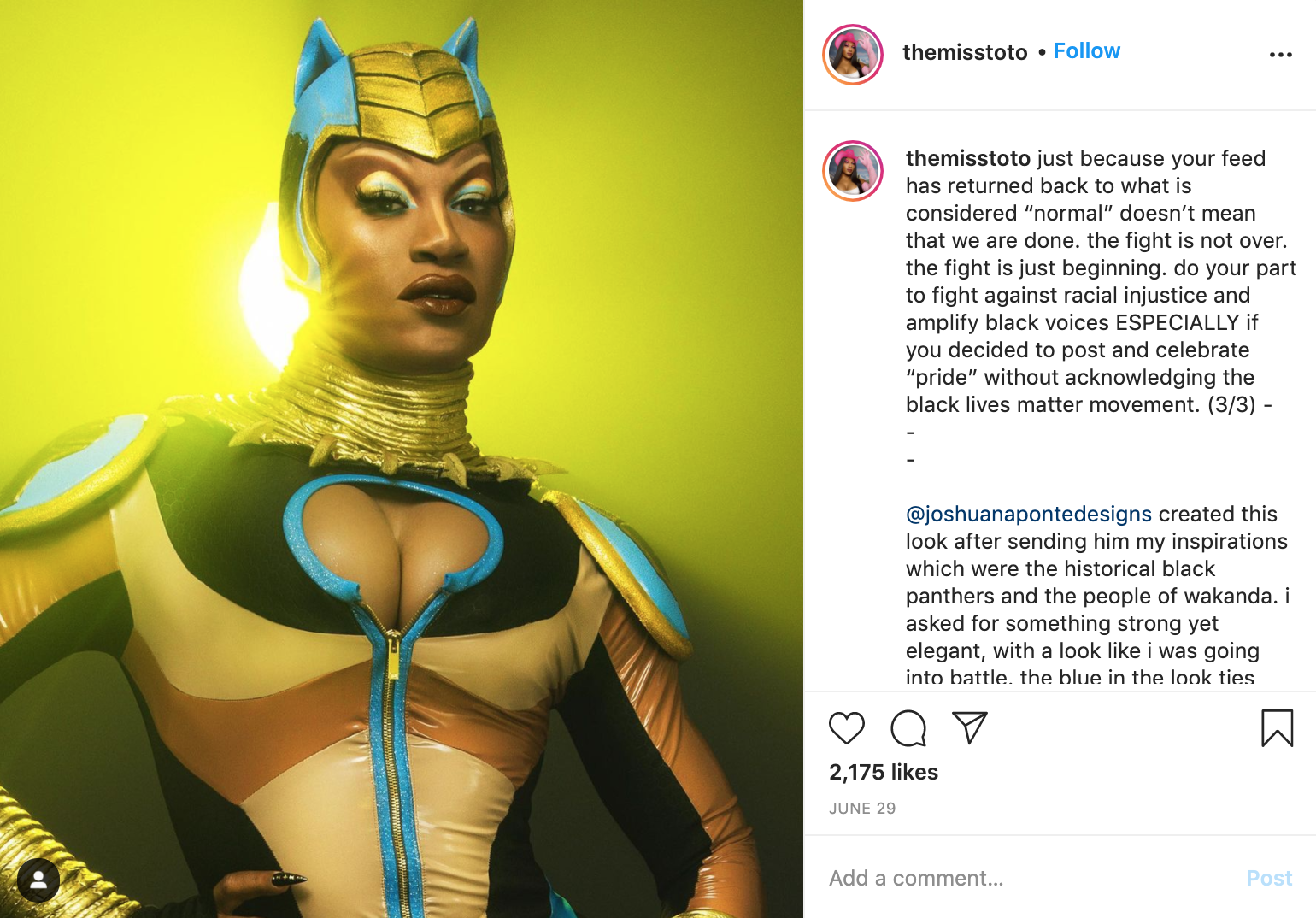 Despite joking about her butthole in the caption of her BLM thirst trap, Feehan — who has gained more than 37,000 followers from her thirst traps and appearing regularly on radio shows and podcasts like Jim Norton & Sam Roberts and The Chip Chipperson Show — mainly stuck to Miss Toto’s rules. She kept it simple, refrained from using hashtags and didn’t fall into the trap of writing “arrest the cops who killed Breonna Taylor” in the caption. Likewise, she wasn’t virtue signaling or trying to imply that she’s involved in activism to a degree that she’s not.

For Byrd, the guy who shot Feehan’s butt pic, a good thirst trap always starts with a realistic photo — something that’s hard to come by these days. “I have no problem with people posting a scantily-clad pic about Black Lives Matter as long as it’s authentic,” he says of his experience on Instagram as a Black man. But more often than not, his feed is filled with more of the same: the over-the-shoulder peak, leg prop and thot squat poses, typically in the woods. When the image itself appears so disingenuous, the message attached to it tends to read the same way, too. “I like pictures that are funny, with people who are confident, and it looks like they’re having a good time,” Byrd tells me. “And with the daily grind right now, that’s hard. People are at their worst.”

A good example of this is when Feehan used another Byrd picture — a shot of her ass on a stool — to make face masks and sell them as merch. “For $10, I’ll sit on your face,” she posted, directing followers to a link in her bio. 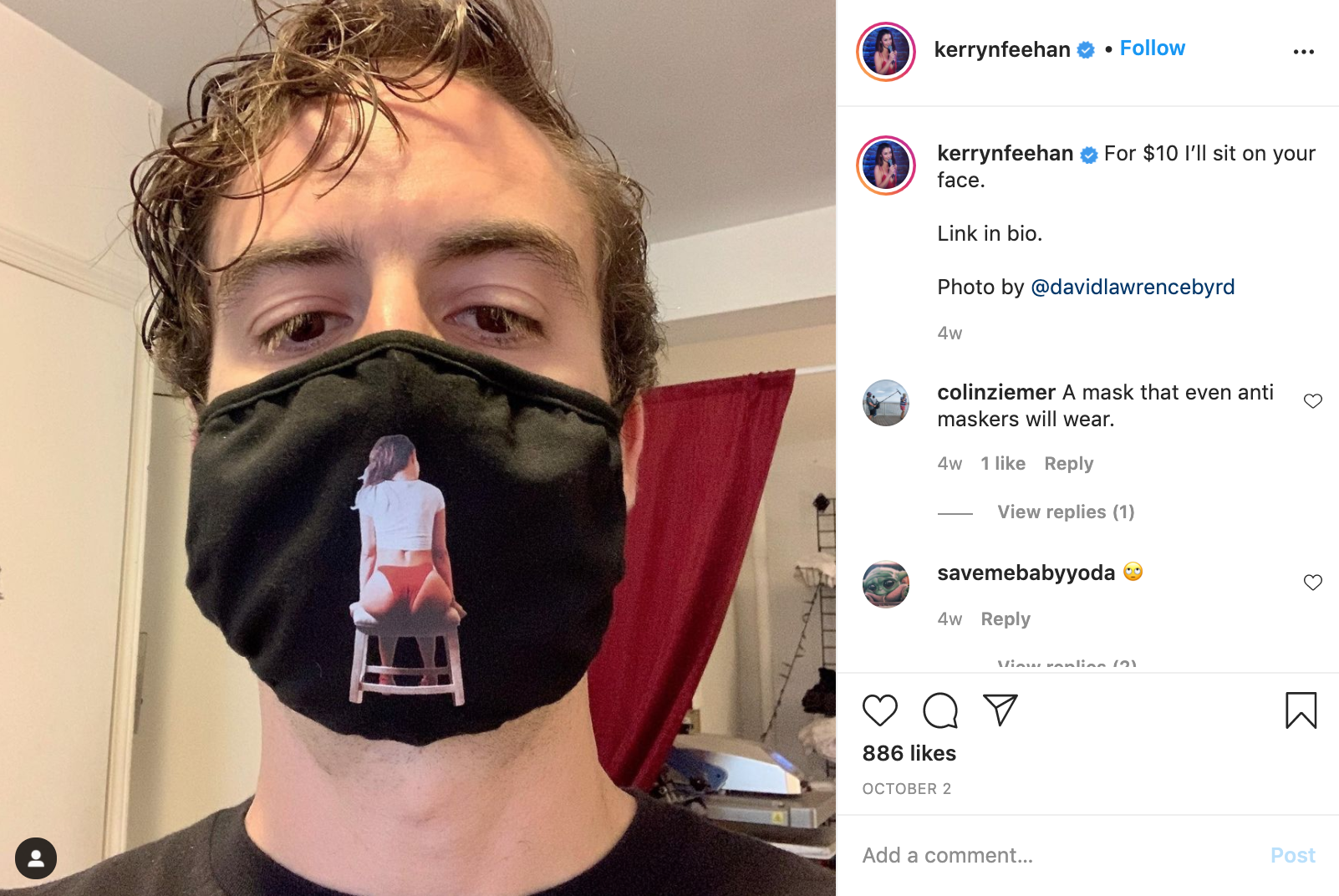 Strangely, though, several men who chose to purchase the product complained — not about the material or fit — but that given the image on the mask, they couldn’t wear it to work and family functions.

Still, they couldn’t deny that there was now at least one thirst trap capable of saving lives.