Diane, a well-known New Zealand writer in her 30s who asks me not to use her real name, is describing the lengthy, unsolicited emails she gets from male readers. “They start out praising my work and then go on and on about themselves and their work ad nauseam, in weirdly ornate language like they’ve sustained a minor brain injury and woken up speaking in Shakespearean dialect,” she explains. “I get welcome emails from all kinds of people I like so I keep my email address public, but these guys are the ones who are most likely to give me bad feedback while recommending obscure art films and asking me to read their manuscript in the spirit of a great Socratic dialogue.”

Shelby Lorman, creator of the popular Instagram account “Awards for Good Boys” and author of the associated book, also receives dozens of unsolicited messages from guys who are “big mad and big sad” about her cartoons poking fun at the way men are praised for doing the bare minimum. “I have a treasure trove of these messages,” she tells me. “Lots of dick info from strangers and lots of relationship questions that contain wild details.” She says she gets these unsolicited messages “everyday” and that they’re “emotional TMI.”

Twitter user @pangmeli has christened the men who send these sorts of messages “Send Guys,” and recently asked MEL (who, in turn, asked me) to investigate why they send women such unsolicited, overwrought, 10,000-word emails and DMs about interpersonal issues.

I couldn’t, however, go about formulating an answer by myself, and so, I reached out to about a dozen other people who have been on the receiving end of these messages, including Diane and Shelby, as well as two men on the sending end — one, MEL’s very own Hussein Kesvani, who thinks he might be a Send Guy, and another, Joey, a 31-year-old logistics manager from Canada, who definitely used to be. “About 10 years ago, I went to a small university with mostly men, and any time a woman would show me any sort of kindness, I’d interpret it as attraction or potential thereof,” Joey, a pseudonym, explains. “I’d write emails picking up small talk where it awkwardly left off, and unfortunately, 10,000 words isn’t a stretch.”

For his part, Hussein tells me that if someone posts something interesting on Twitter, he’ll sometimes DM them a paragraph or so in agreement, occasionally sharing an illustrative anecdote from his own life as well. We both agree that this probably doesn’t meet the Send Guy threshold, but he tells me about a longer DM that probably does. “I sent a DM to an author after I read her book telling her how it made me rethink my relationship with my dad,” he says. “That was a couple of pages.” This suggests that you can be a recidivist Send Guy, or just a one-off offender.

Hussein and I go on to outline the key criteria for being a Send Guy, which seems to be:

When I discuss these points with @pangmeli, she agrees that they’re the main features of a Send Guy. “For me, what underlies them all is narcissism: The Send Guy’s interest in self-expression smothers any kind of self-editing,” she tells me. “He doesn’t wonder, ‘Is the length of my note embarrassing?’ Or: ‘Does it make social sense to send this message to this particular audience?’”

I put some of these questions to Joey, who remains embarrassed of his Send Guy past. “Whenever I look back, I cringe,” he says. “At the time, the ideal response would be that someone would find me interesting and want me in their life — ideally as a romantic partner, but I would’ve settled for friends. I was extremely lonely at that point.” Unfortunately for Joey, he says it never worked: Women either politely distanced themselves or ignored him completely. “It was never about getting laid, it was about getting some sort of validation by being in a relationship,” Joey continues. “More than anything, I wanted a Manic Pixie Dream Girl — Garden State probably ruined my early 20s.” Some combination of growing up, gaining new life experience and befriending queer and feminist people helped Joey put the Send Guy life behind him.

So who’s on the receiving end of these messages? My impromptu focus group suggests that those with some degree of fame, especially ones perceived as intuitive and emotionally open, are likely to receive personal messages from fans, some of which might meet the Send Guy criteria. “When I was doing Gilmore Guys, it was definitely more common than it is now — I’d get one every six weeks or so,” explains comedian Demi Adejuyigbe, who says that he receives messages from fans that often contain personal details and narratives, and that most of them come from women. “With Punch Up the Jam, some people will message me like, ‘You talked about that on the podcast, so I want to tell you a long personal story about what that song means to me.’”

“It’s a weird dynamic, because they’ve experienced a lot of me that I haven’t of them, so it doesn’t feel unreasonable for them to reach out,” he continues. He says these messages put him in a difficult position, though, because he doesn’t want to be rude or dismissive toward fans who trust him with their personal dilemmas, but he’s also uncomfortable about the pressure it places on him to respond sensitively. He says it adds a heaviness to his comedic work, too, which he tends to think of as “ephemeral and unserious.”

But while non-men do send unsolicited personal messages to strangers, both Diane and Shelby notice a certain gendered dynamic in the tone and volume of messages they receive. Shelby estimates that “99.9 percent” of the “unprompted and explicit” messages come from men, and Diane claims that the most obnoxious messages always come from guys. “The people who write overly ornate emails that simultaneously put me down and praise me, and then go on to recommend me things I might not have heard of but would probably like, e.g., some of the most famous poets of the 20th century, strikes me as uniquely male in their entitlement, lack of generosity and outrageous demands,” Diane explains. 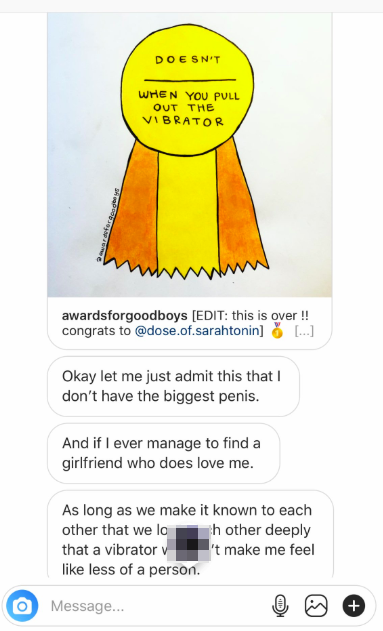 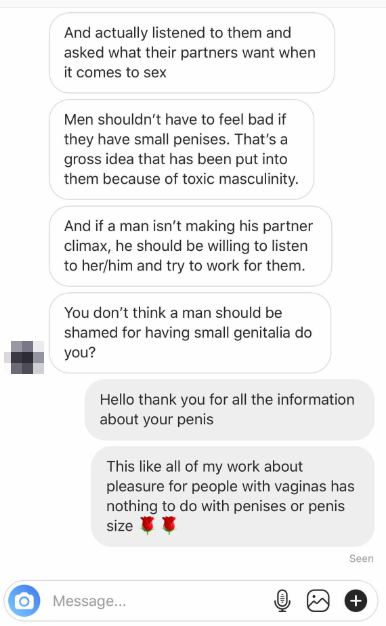 She adds that men seem especially prone to pushing back against boundaries. In fact, Diane says she once put a notice on the contact section of her website that read, “Please don’t send me emails about how much you hate your ex-wife,” and immediately received “a whole shit-ton of emails” exactly like this. “It was as if to say, ‘I’m self-aware enough to be in on the joke,’ but it was very counterproductive, as are most attempts to get dudes to behave on the internet,” she tells me. “Nobody thinks they’re part of the problem if it’s done under the guise of irony.”

Another indicator of the gendered nature of this phenomenon is how often I heard from non-famous women who have Send Guys — usually men they barely know (distant co-workers, customers or social media strangers) or long-forgotten exes and old flames. “I just got one of these bazillion-word messages from a guy I haven’t spoken to in six or seven years,” says Kate, a 29-year-old studio manager in Toronto, adding he was “some dork” with whom she had a “very brief” fling at university. “We haven’t spoken since, but last week he sent this enormous ‘apology’ novel out of nowhere, saying it’s ‘tearing him up’ and he ‘genuinely loses sleep over it.’”

Guilt and self-loathing seem to be the overriding emotions of the Send Guy — qualities that often coincide with narcissistic personalities. Which brings @pangmeli and I to the topic of whiteness. “This kind of narcissistic self-expression is also often a white people thing,” she explains, as we chat about how both maleness and whiteness often blunt self-awareness and imbue subjects with the confidence that their “insights” are worth sharing with others.

She says it reminds her of something writer Kyrell Grant frequently talks about in response to seeing or receiving long, rambling messages from white people about race — i.e., white people need journals. “They often fail to recognize when something should probably be written down in private instead of communicated to others,” @pangmeli says. “There’s this underlying entitlement that’s like, ‘If I have a thought, someone else should hear it.’”