The Only Memes Worth Sharing in 2018

The good, the great and the extremely relatable

The year of our lord two thousand eighteen: You’re a filthy liar if you say there was anything decent in it. Oh, did you buy a house? Have a baby? Congratulations, your friends hate you. Don’t even talk to me about the good music or the “Blue Wave.” There was only a single form of pure, unproblematic enjoyment to be had in this wretched time: memes.

And even most of those were shit, honestly. So let’s take a moment to appreciate the few that made us feel anything at all — the ones with a shot at internet immortality. In other words, forget Avengers: Infinity War being the most ambitious crossover event in history. “Don’t say it” and “He’s not your man” were over before they began. That whole Tide Pod Challenge was just a viral marketing stunt, I’ll have you know.

These were the memes worth sharing in 2018:

“Absolute Unit” was actually coined in mid-December 2017, but fuck you, it counts. The immediate and continued popularity of the phrase is proof that language had suffered in need of some way to positively describe titanic girth. Now we have it, and the absolute units are the best defense we have against the rambunctious large adult sons. Spotting a unit is like seeing a blimp in the sky — reason for childlike wonder and respect.

Nothing conveyed the “What exactly is happening here” vibe of these past months like a photo of Kalin Elsa, Twitter account @Solo_Kalin, whose knees were “crying” after she posed in a squat for the ‘gram. That we mistook her pain for an effort to clearly see something in the distance was only too apropos for a planet about to get its final notice on climate change. Keep this image handy for a scathing reply to any bad post, ever.

A solid template is the bedrock of a long-lived meme. But the American Chopper argument structure was a mess — which ended up being one of its greatest strengths. Too long to display properly on Twitter or on your phone, its throwback feel wound up generating countless meta memes on the difficulty of curating such content. Long before that, we’d entirely forgotten that this was a TV show focused on hideous motorcycles. 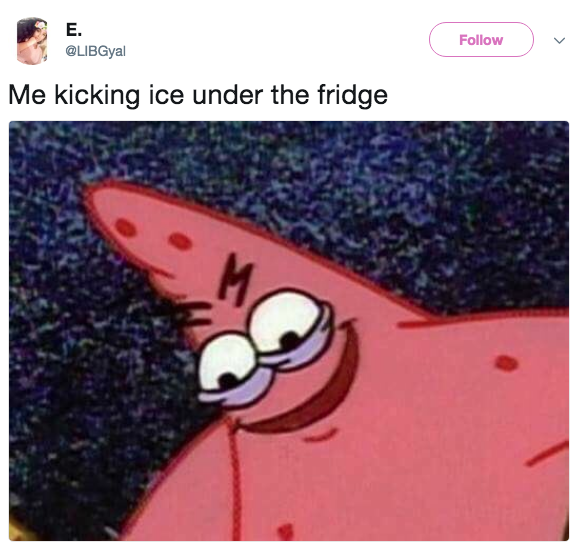 SpongeBob SquarePants is an endless font of web humor; almost any single frame could easily conquer social media for a week. That said, Evil Patrick beats Tired SpongeBob for the cartoon’s finest contribution to the 2018 discourse. We’re all exhausted anyway — may as well indulge our worst instincts, at least on a miniature scale, and enjoy what wreckage follows. (I also have those bags under my eyes.) 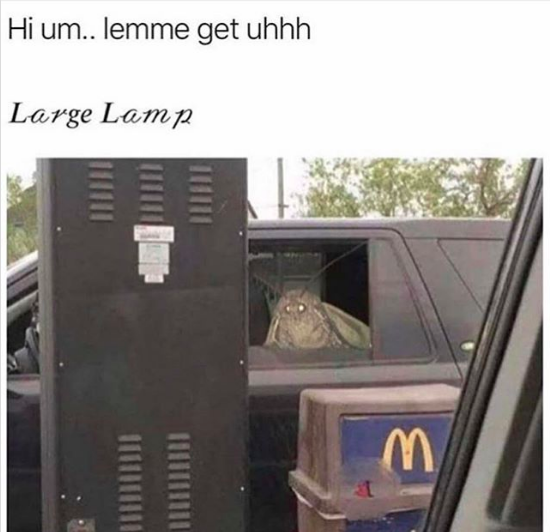 You simply can’t trust anybody who wasn’t bullish on this, the ne plus ultra of beat-a-dead-horse memes. That a moth will always be attracted to artificial light — which is to say, the mythic lamp — is hardly a comedic observation. The beauty was in all the different angles that premise found for itself, and the billion obstacles the moth would gladly overcome for its glowing prize. Damn, does that bug know how to yearn.

That the NHL’s Philadelphia Flyers unveiled a bug-eyed, pot-bellied new mascot from a hell dimension was delightful from the get-go. But the bonus pleasure here was all the humorless scolds yelling that Gritty can’t be Antifa because he’s the product of corporate strategy designed to capitalize on the unpaid work of meme creators. Gosh, really? Next you’ll be telling me teens don’t actually want to have sex with the pope.

Is This Your King?

Fittingly, it was one of the only movies to live up to the hype this year — Black Panther — that crystallized our growing sense of everything and everyone being completely half-assed. When Michael B. Jordan’s Killmonger humiliated T’Challa in ritual combat to become Wakanda’s usurper king, he seemed almost pissed that it hadn’t been harder. I can’t exactly empathize, but I do know what it’s like to be testy, smug and disappointed.

Is This a Pigeon? 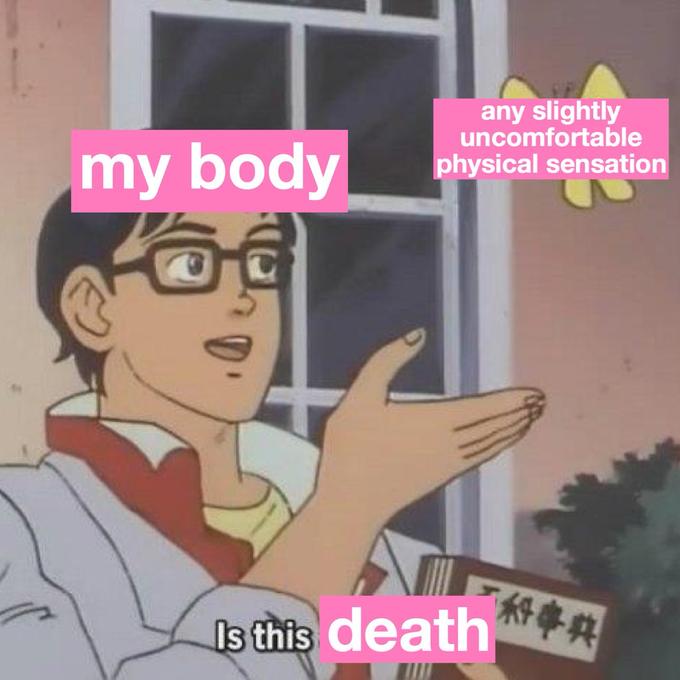 The original screencap, from the 1990s anime series The Brave Fighter of Sun Fighbird, had been a meme before — though not in this ultimate, highly exploitable form. The labeled and re-captioned version functions as a gentle companion to “Is This Your King?,” with a naïve (or willfully ignorant) question replacing Jordan’s rhetorical hostility. A comment on the limits of perception and taxonomy, it delivers the hardest of epistemological truths.

To hear any politician or pundit tell it, America has never been more divided. Putting aside the Civil War ghosts who might take issue with that statement, we should also recognize the strong alliances forged amid our national chaos, each represented by an artist’s rendering of the macho handshake/arm-wrestle Arnold Schwarzenegger and Carl Weathers performed in Predator. See? People can still agree on the issues.

It says a lot about the confusion of the flipped reality we inhabit that people can’t figure out how to boast anymore. Nevertheless, we seek to impress with “weird flexes,” the spiritual successor to the humblebrag. All you have to do is voice somewhat aggressive pride in a fact that is basically irrelevant to the discourse, and voila. The “but okay” half of the equation is comforting assurance that you’re allowed to continue in this odd vein.

They Did Surgery on a Grape 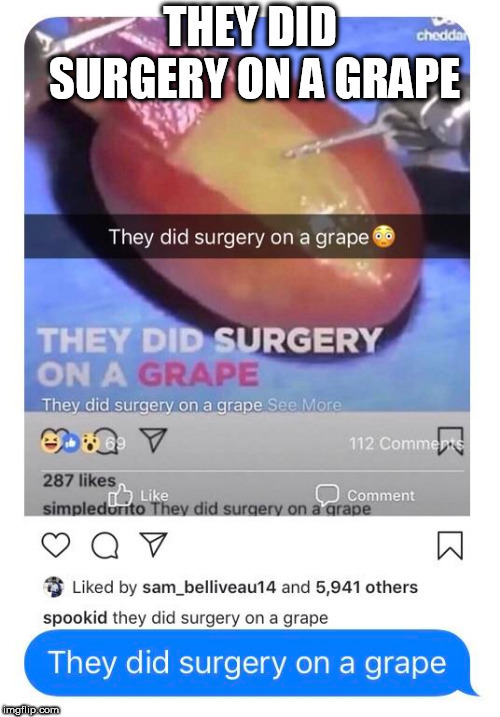